Powertrain: A 290-horsepower, 3.5-liter V6 with a nine-speed automatic and front-wheel-drive.

A 321-horsepower, 3.0-liter V6 with two electric motors and a seven-speed dual-clutch automated transmission and all-wheel-drive is optional 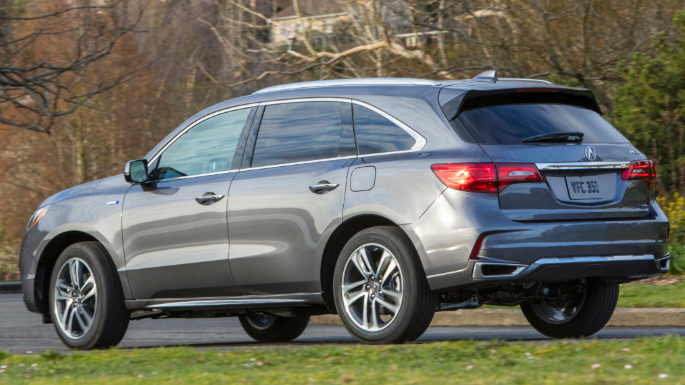 The 2020 Acura MDX is a mainstay of the three-row luxury SUV class. Having pretty much established the segment in 2001, the MDX is a go-to choice for many, with a high level of repeat buyers. With a standard third-row seat, an extensive list of standard features, a potent and efficient available gas-electric hybrid system, and comparatively reasonable pricing, there is a lot to recommend.

While the MDX is mostly unchanged from 2019, a new limited-edition MDX PMC Edition is a fully-equipped Advance model that’s been finished by the same wing of the factory that assembles the Acura NSX supercar and includes the same Valencia Red paint as on the NSX. 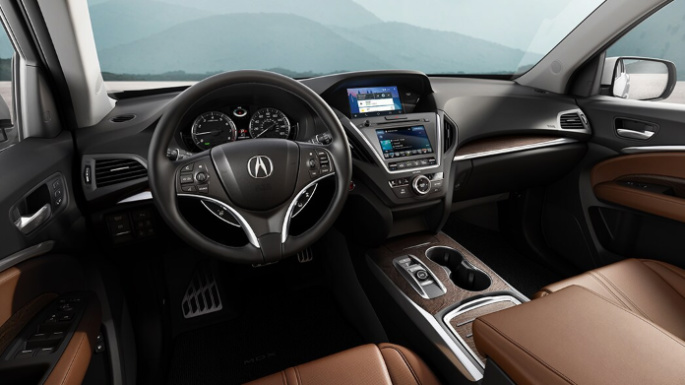 The 2020 Acura MDX received the highest five-star rating in overall tests from the National Highway Transportation Safety Administration (NHTSA). In the Insurance Institute for Highway Safety (IIHS) crash tests, the MDX scored the highest, Good, in all of them, and its headlights were given the second-highest score. The MDX hasn’t been tested in the small-overlap passenger’s side test, so it hasn’t been given a Top Safety Pick score yet. 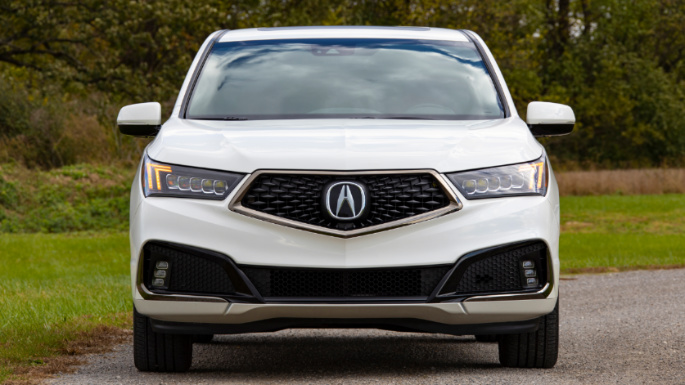 The Technology Package adds rain-sensing wipers, power-folding side mirrors, a 10-speaker audio system, and built-in navigation – all for less than where some of the Acura’s competition starts.

All-wheel-drive is $2,000 on all gasoline-only models.

The Sport Hybrid adds $3,000 to Technology and Advance models, but also adds about 30 horsepower and gets five mpg city/highway combined more than the equivalent all-wheel-drive gas-only version.

Some features like a heated steering wheel are only available on the top Advance Package model, and it’s a similar story for other upscale features. Acura doesn’t allow for individual options aside from powertrain choices. Still, MDX Technology Package represents the best value, even for those considering the hybrid model because that’s where the Acura vastly undercuts its competition. 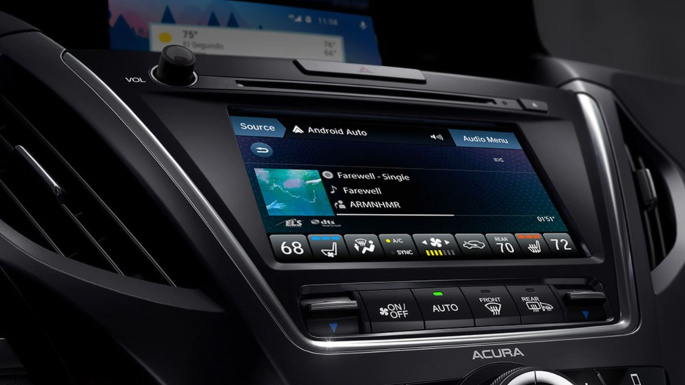 All MDX models get the same infotainment system, using an eight-inch screen in the dashboard and operated with a dash-mounted controller and a touchscreen radio. Apple CarPlay and Android Auto come standard on all models, while built-in navigation comes on all but the base model. There are three USB ports in front and two in the second row, while Advance models can opt in for a third-row charge point.

However extensive the system is, all of its functions are disjointed with the combination of controller wheel, physical buttons, and a touchscreen driving the highest screen. There are far more unified systems on a Buick Enclave, as well as an Audi Q7, BMW X5, and Volvo XC90. Worse, the graphics on the dual-screen setup look especially dated when compared to newer SUVs.

The available Entertainment Package adds a 9-inch widescreen mounted in the ceiling with wireless headphones. On Advance models, the screen is upgraded to a 16.2-inch version. It’s a more integrated solution than the screens on rivals, but most people may be better off with a mount for tablets. 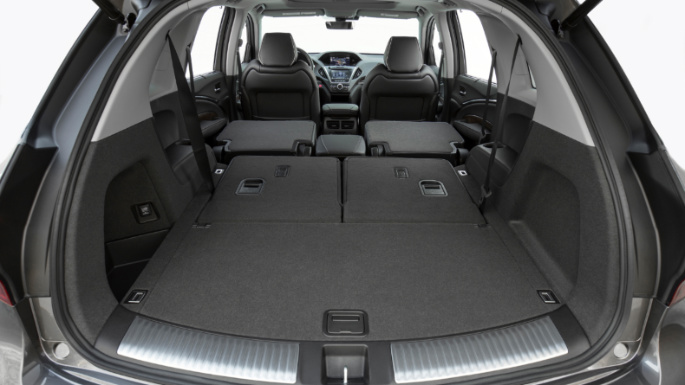 Every MDX comes with three rows of seats, and all but the Advance seat up to seven. The Advance adds second-row captain’s chairs with a console between the seats. Most rivals offer captain’s chairs, but the mandatory console eliminates a pass-through so kids can get into the third row. BMW and Mercedes-Benz charge extra for cramped third-row seats.

Fortunately, the third-row is easy to access with the push of one button on the seat that lets the second row slide forward. Still, the manually operated systems on the Buick Enclave and Volvo XC90 create larger passages.

And it’s only kids who will want to sit back there. While legroom isn’t so much the problem, it’s headroom. It’s a strict two-seater in the third-row, unlike the Enclave, but mostly nice for the class – much better than a number of rivals such as the Cadillac XT6 and Lexus RX L that might make even kids feel squeezed. In every other row, however, the MDX is spacious.

Cargo space with all rows up is pretty snug, and the Buick and Volvo do better. With all of the seats down, however, the MDX moves toward the top of its class. The Acura is rated to tow up to 5,000 pounds when properly equipped, better than the Audi Q7, less than the Land Rover Discovery and Mercedes-Benz GLE. 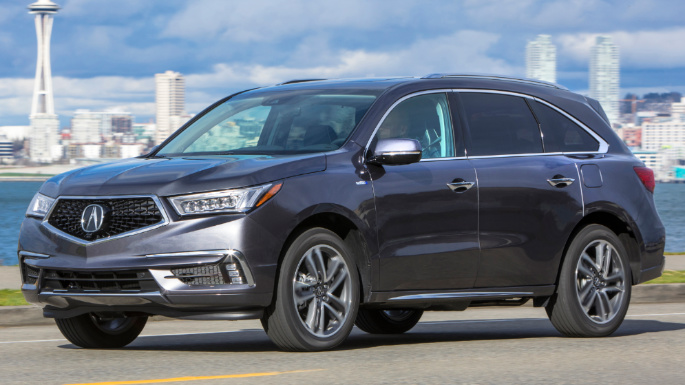 Introduced for 2014 and given a new grille and other updates for 2017, the MDX isn’t the newest face out there, but Acura has done things to drum up some attention – last year with the A-Spec Package variant and this year with the very limited edition PMC. In a world of similar shapes, however, it’s not wrong to say the MDX might blend in a bit. It may not have the detailing of the Lincoln Aviator or the traditional Britishness of the Land Rover Discovery, but it’s certainly familiar to current Acura owners and fans. A-Spec and PMC models add a more aggressive look than the standard models, with larger wheels and blacked-out trim.

Inside, the old and familiar Acura look has been upstaged by the new Acura look found on the smaller RDX SUV. Jumbled infotainment system aside, it’s a high-quality interior that also manages to feel a little sterile. Even in the A-Spec version with Alcantara simulated suede, the MDX doesn’t have the high-class ambiance that one of its German rivals does, nor the Scandinavian-simplicity Volvo, or even the highly detailed Lincoln. At least materials feel more robust than in the Buick and Cadillac. 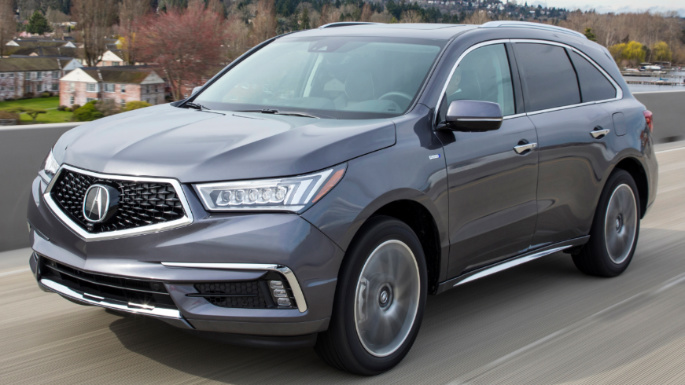 Most MDX models get the 290-horsepower V6, and it moves the SUV reasonably confidently. While it doesn’t have an abundance of power, it’s enough for the Acura when fully loaded. Still, many rivals now exceed the 300-horsepower mark now and don’t need the constant shifting from the MDX’s nine-speed automatic, though the transmission is better here than in some other applications. For more performance, however, the hybrid adds a useful 31 horsepower and a satisfying surge off the line thanks to two electric motors. One thing in the MDX’s favor is that it weighs considerably less than some of its rivals, which can hit the 5,000-pound mark.

The MDX skews more on the side of comfort, as most SUVs of this size do. An adaptive damper system comes on Advance and hybrid models and possibly helps to keep the big Acura composed on twisty roads, as well as the ride in check. Of more assistance is the all-wheel-drive system. The so-called Super Handling All-Wheel-Drive (SH-AWD) available on gasoline models does its best to shift power around to wheels losing traction, not only front and rear but side to side. While not as ponderous as many in this class, a BMW X5 is still the one to beat here. At least the MDX is very quiet at any speed. 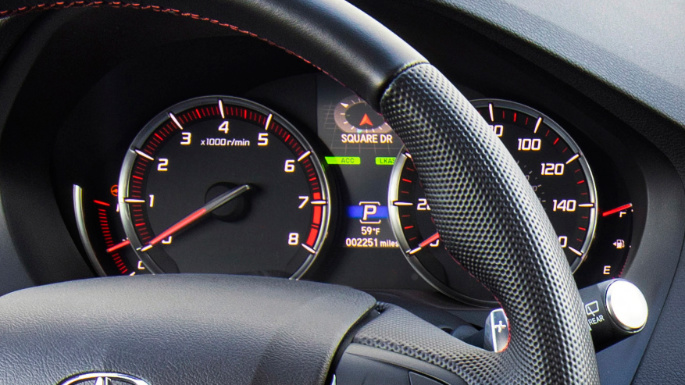 Those numbers are mostly in line with the MDX’s rivals, but most of those have turbocharged four-cylinder engines as base engines. Only the turbocharged six-cylinder BMW X5 edges out the Acura and has more horsepower. But the also-more powerful Volvo XC90 is on par with the MDX, as is the Infiniti QX60 and Lexus RX 350 L. The Land Rover Discovery is also comparable with the MDX, but only equipped with its optional turbodiesel V6 engine.

With the hybrid drivetrain, the MDX is rated at 26 city, 27 highway, and 27 mpg combined. Even though those numbers fall short of the less-powerful Lexus RX 450 L, they’re still good for the class. Most other luxury hybrids are plug-in hybrids and achieve peak efficiency only when fully charged. 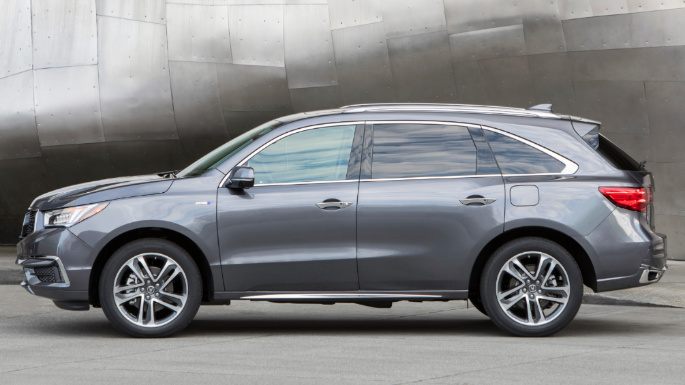 An additional Entertainment Package is $2,000 and adds a 9-inch integrated screen with two wireless headphones, a 110-volt household-style power outlet, as well as second-row window sunshades and heated second-row seats.

And the Technology Package with the Sport Hybrid system adds $3,000.

The Entertainment Package on the Advance adds a 16.9-inch widescreen and an HDMI port.