The Acura MDX is a midsize luxury crossover from Honda's luxury brand. It comes in gas or hybrid versions and offers three rows of seats. It competes with a variety of luxury three-row family crossovers including the Infiniti QX60, Lexus RX L, Buick Enclave, Mazda CX-9 and the Lincoln Nautilus. 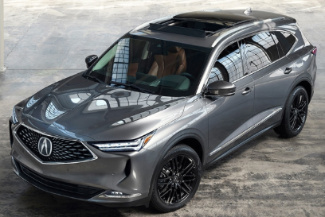 Acura skipped the 2021 model year for the MDX and instead decided to launch the new, fourth-generation redesign for 2022. The exterior of this all-new model features a panoramic sunroof similar to the one found on the RDX and improved drivetrains.

The fifth trim level, the Type-S, comes with a turbocharged 355-horsepower 3.0-liter V6 with standard AWD.

For handling, this all-new MDX model has a double wishbone suspension that features damper forks and aluminum shock towers and lower control arms. The entire vehicle is tougher and has a more heavy-duty construction than previous generations. It features high-strength steel, press-hardened steel, and aluminum throughout the car and is designed to take on harsher conditions and rougher roads.

The interior of the new MDX is designed more like a luxury vehicle and has a 12.3-inch infotainment and navigation system and a 12-inch digital instrument cluster.

The front seats are fit for a luxury SUV and adjustable in 16 different ways and the second-row seating can be removed for even more cargo space. It also has an optional 16-speaker sound system that has four speakers mounted in the roof for optimum sound coverage. 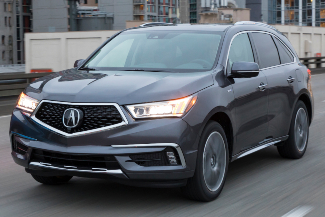 The third generation of MDX began with the 2014 model and it now offered a front-wheel-drive-only model for the U.S. market. The new engine was a 3.5-liter V6 putting out 290 horsepower and featuring variable cylinder management. It was paired with a six-speed automatic transmission for the 2014 and 2015 models but later upgraded to a nine-speed automatic transmission.

All-wheel-drive models improved fuel efficiency slightly with 18 mpg in the city and 27 mpg on the highway.

The MDX has high received scores for safety, including four Good ratings from the Insurance Institute of Highway Safety and six five star ratings out of eight possible from the National Highway Traffic Safety Administration.

Acura refreshed the MDX in 2017; this update featured a new grille (without the chrome bar across the front), LED headlights and more standard safety features such as a driver's knee airbag.

Notably, this refresh included the introduction of an all-wheel-drive only hybrid model with a 3.0-liter V6 engine and seven-speed dual clutch transmission.

In 2019, Acura introduced the A-Spec sport-oriented trim package with 20-inch wheels and dark exterior accents instead of chrome. The powertrain for this package stays the same as the other trims. 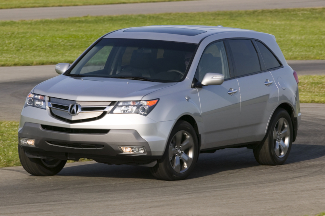 The second generation of MDX came out for the 2007 model year.

Its exterior styling was vastly changed, featuring sharper lines and a redesigned grille. It also had a longer wheelbase than the previous generation and a wider track, despite sacrificing some rearview visibility.

The standard engine was upgraded to a 3.7-liter V6 that put out 300 horsepower and was able to go zero to 60 in 6.5 seconds. It had a fuel economy rated for 16 mpg in the city and 21 mpg on the highway. It was also considered one of Honda's most powerful engines to that point. This engine was paired with a five-speed automatic.

The automatic AWD system was replaced by the more advanced Super Handling All-Wheel Drive, or SH-AWD, which now had an active rear differential, similar to those on high-performance sports cars. The MDX had a towing capacity of 5,000 pounds.

As was common with Acura, the MDX was well-equipped at all levels of trim with features like leather interior, a moonroof and Xenon headlights. Between the model years of 2007 and 2009, there were three available option packages in the Technology Package, Sport Package and Entertainment Package. Each package offered a range of options to appeal to consumers looking for high-tech, sporty driving or entertainment.

There were a few mid-generation upgrades for the MDX. In 2008, an auto-dimming rearview mirror was added. In 2009, navigation upgrades and two new colors were added.

In 2010, the MDX underwent a new facelift primarily to adopt Acura's new grille style that it was using across all models. It also added a six-speed automatic transmission with paddle shifters. The Advance Package added a number of advanced safety options like adaptive cruise control, blind spot monitoring, and a collision mitigation system as well as premium leather seats. 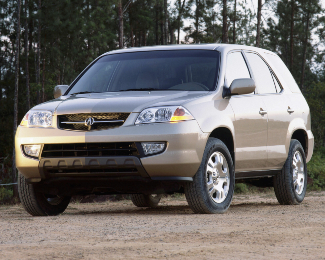 The first generation of MDX debuted for the 2001 model year as an all-wheel-drive crossover SUV.

It was built on a revised Honda Global mid-size platform, which is similar to what's used on the Honda Accord and Acura TL, which are both passenger cars, and the Honda Odyssey minivan.

The standard engine was a 3.5-liter V6 with 240 horsepower paired with a five-speed automatic transmission.

The curb weight of this generation was just over 4,400 pounds with a 106.3-inch wheelbase and eight inches of ground clearance. The cargo area had two extra seats that folded into the floor. Even though the MDX was designed to allow for seven passengers, the third row of seats was on the small side and could only seat two people.

This generation of MDX offered an automatic 4WD system that engaged whenever wheel slipping was detected. It also offered a lock mode for permanent 4WD to climb hills or to get the vehicle unstuck. For normal cruising, the vehicle switched to FWD to increase gas mileage and reduce noise from the drivetrain. The difference between the 4WD auto system in the MDX vs. some other vehicles is that it tries to predict when it will lose traction and then applies four-wheel power. Many other auto 4WD systems wait for an actual loss of traction before sending power.

Acura gave this generation of MDX a slight facelift in 2004 and upgraded the 3.5-liter V6 to 265 horsepower.