The 2019 Audi A7 is a four-door hatchback that is marketed and sold in the premium and luxury vehicle segments. The car was redesigned for the 2019 model year with a new but similar exterior design, overhauled interior technology, and updated powertrain features. The A7 is very closely related to the A6 sedan, sharing much of its underpinnings and engineering.

The car is aimed at new car buyers that are shopping for a German luxury sedan with more usable space and a unique look. The hatchback design and folding rear seats give the A7 the ability to perform many of the functions that people look to crossovers to fulfill, like hauling long or odd-shaped cargo.

The A7's V6 engine uses a turbocharger this year, rather than a supercharger. Audi has upgraded the A7's drivetrain with a new all-wheel-drive system, and a seven-speed dual-clutch gearbox replaces the outgoing eight-speed automatic.

Because of its price and shape, the Audi A7 competes with a range of premium and luxury four-doors. The Mercedes-Benz E-Class, Mercedes-Benz CLS-Class and BMW 5 Series, though they all lack the Audi's hatchback design. Buyers looking to save money might shop for the Kia Stinger, which also sports a similar hatchback design at a lower price point. The Kia also offers a turbocharged V6 engine, available all-wheel-drive, and long list of features.

Buyers might also consider any number of the latest crop of SUV "coupe" models from BMW or Mercedes-Benz, such as the X6 or GLE Coupe. These vehicles take a different approach to the blended vehicle look and may not handle as well, but offer more utility and all-weather capability.

TL;DR The Audi A7's unique shape and hatchback make it stand out in a crowded field of luxury sedan contenders. 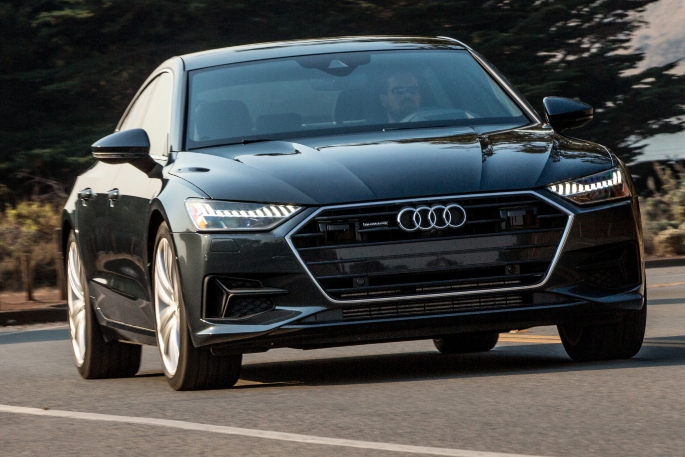 The A7 has received a redesign for 2019, even if the overall shape is similar to the outgoing model. The new look includes sharper exterior styling but retains the model's signature four-door hatchback profile. All-around LED lighting is standard now, as are 19-inch, 10-spoke wheels. A Matrix LED headlight system that adjusts high beams around oncoming traffic and pedestrians is newly available.

Critics praise the A7's sleek lines and sporty profile, noting that the sloping roofline and fastback shape stretches the overall visual appearance of the car. The hatchback, unusual for this type of vehicle, is more functional than a traditional trunk and allows for a larger space behind the back seats and easier loading of bulky items. The grille area has also been praised as blending the required radar and safety tech into a sleek look. 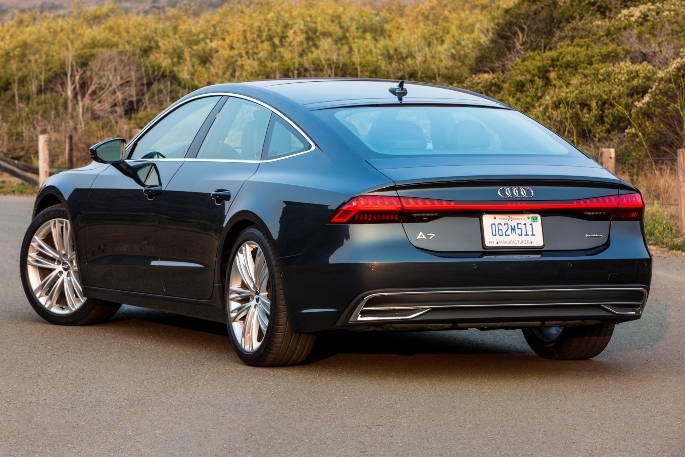 With seating for five people and upscale standard features, the A7 has won critics' praise for a top-notch interior. 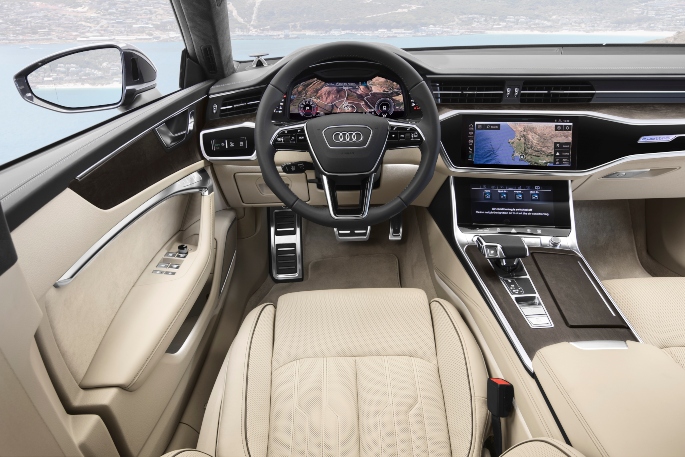 The power steering wheel and seat adjustments are standard, as are heated front seats that can be upgraded to include ventilation. Front seat passengers enjoy generous legroom and an airy feel, thanks to plenty of headroom and large windows in front. Reviewers note that the high level of adjustment in the front seats makes it easy to find a comfortable position for both the driver and passenger. The front seats can also be optioned up to include a massage feature.

The A7's lengthy wheelbase affords plenty of legroom for rear-seat passengers, even taller ones. One notable drawback of the sloping roof is a reduction of rear-seat headroom, but large door openings make entry and exit relatively easy. People using child seats in the rear will find that the low roof makes loading and unloading the seats more difficult than in a traditional car or SUV. Reviewers praise the A7 for excellent outward visibility in the front and sides, but the small rear window makes visibility difficult out of the back. The low roofline impedes rearward visibility further. 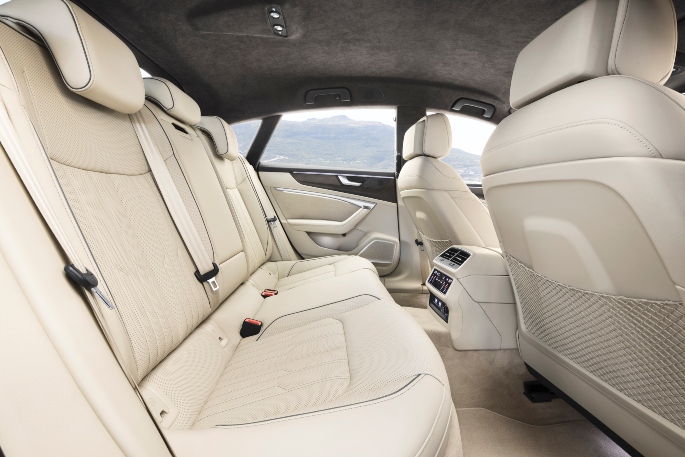 Critics note that the A7's cabin is sparse but refined, with a less busy interior than competing brands like Mercedes-Benz. The interior build and material quality is on par with competitors and should meet buyers' expectations of a vehicle in the luxury segment.

The A7 features a dual-touchscreen infotainment setup that now matches the systems found in other Audi models like the A6 and A8. Critics like the new system's interface, noting that it's easier to use than the previous car's single screen and rotary dial. The new system's displays are well-integrated with the dash and are easily visible in most light conditions.

TL;DR The folding rear seats and hatchback give the A7 SUV-like capability in a sedan-sized package. 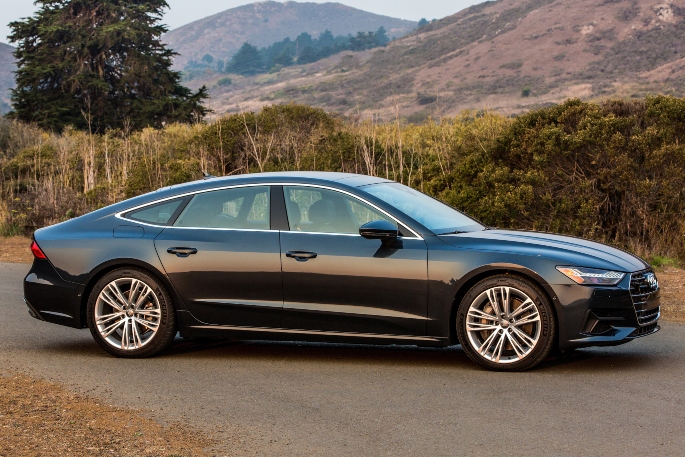 The A7's hatchback design gives it an advantage over more traditionally-shaped competitors in the cargo space category. There is 25 cubic feet of cargo space behind the rear seats, placing the Audi at the top of its class. The rear seats fold, which significantly increases cargo space and usability, especially for longer items. Critics knock the A7's trunk space for being shallow but note that the folding seats help compensate for the lack of depth. A hands-free power liftgate comes as standard equipment, making the Audi much more like an SUV than its competitors.

TL;DR Two screens are better than one in the A7. The new system is more intuitive and easier to use than the mix of physical and screen controls from previous models.

The 2019 refresh brought a new approach to infotainment for the A7. Two screens and a single row of touch-sensitive buttons operate nearly all of the navigation, audio and climate control functions. The only physical button now is the volume knob. 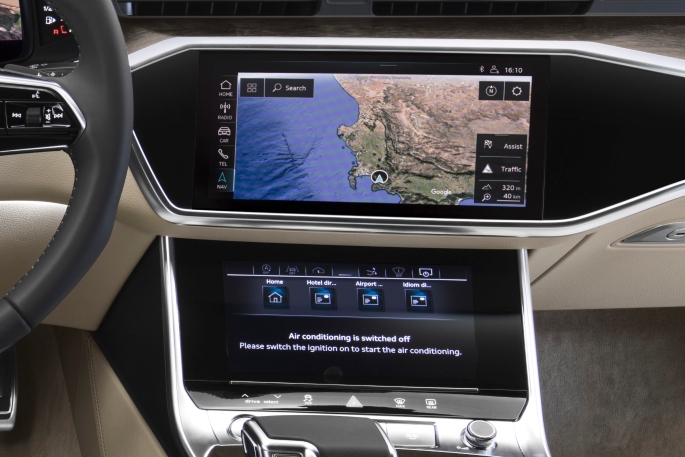 The top screen is a 10.1-inch display that is turned slightly toward the driver and handles things like audio and the standard navigation system. There's a lower display that measures 8.6 inches for climate controls and cabin settings like heated seats.

Reviewers note that the dual-screen system may require a bit more learning time than the previous design. But once the user is acclimated, it makes more sense than a mix of physical and screen controls. They also mention that the touchscreen is not as sensitive as users might expect and requires more pressure to activate than those from other manufacturers.

Some testers deduct points for Audi's decision to split some controls between both screens, criticizing the need to select a menu on one screen and change the setting on the other.

The A7's infotainment system supports both Apple CarPlay and Android Auto. New for 2019 is the addition of wireless Apple CarPlay, which reviewers like for its convenience and ease of use. Android Auto users will have to stick with USB connections for now. Testers also praise the A7's audio system for sounding great, even without the addition of the optional Bang and Olufsen stereo.

TL;DR The A7 has earned good crash test ratings, but advanced driver assistance features are held back for higher trims.

The A7 is available with a wide array of advanced driver assist systems, but for the most part, they are only available on the two most expensive models. The Premium Plus and Prestige trim levels come with Audi's pre-sense 360 system, which uses 24 sensors, radar, cameras, and sonar to alert the driver and help avoid collisions. There's also a top-view camera system with a 360-degree view, adaptive cruise, rear cross-traffic alerts, pedestrian detection, and more.

The A7's standard features were strong enough to earn "Good" ratings from the Insurance Institute for Highway Safety (IIHS) for front and side-impact protection, as well as roof strength and head restraints. The standard crash avoidance features earned the A7 a "Superior" rating. The National Highway Traffic Safety Administration (NHTSA) has not yet rated the 2019 A7.

TL;DR The new A7 is softer than before but retains a sporty attitude and comfortable ride.

Those who have reviewed the A7 give it big points for its ability to mix sportiness, comfort, and utility. Despite being a large vehicle, the car is noted as being agile and composed. Reviewers do notice more body roll and movement when cornering due to Audi's increased focus on the A7's level of comfort. Some state that the car is more usable as an everyday driver because of this, making it more accessible for a larger group of buyers.

The only powertrain available for 2019 is a turbocharged 3.0-liter V6 that makes 335 horsepower. It's mated to a seven-speed dual-clutch automatic transmission and standard all-wheel-drive. Critics who have driven the car aggressively notice that turbo lag is very slight, and that power delivery is smooth. Throttle response is immediate, and the seven-speed gearbox is paired well with the engine to draw out as much power as possible. Audi has added a 48-volt mild hybrid system that is said to boost low-range power. The updated Quattro all-wheel-drive system can shift power between the front and rear wheels, or individually among them to optimize traction.

Testers have clocked the A7 at a 0-60 mph time of less than five seconds, which is very close to the times that were recorded in the previous car. They note that, while the new gearbox is responsive and snappy, there's no noticeable improvement in performance over the old car's transmission.

TL;DR The A7's fuel economy numbers are competitive against the rest of the luxury sedan class, but Audi could've done more with the hybrid system.

The single powertrain in the A7 generates EPA-estimated fuel economy ratings of 22 mpg city, 29 mpg highway and 25 mpg combined. That is on par with others in its class. Critics knock the A7's mild hybrid system for not improving efficiency more, however.

TL;DR The A7's mid-range Premium Plus trim has top-notch features without topping out the price tag.

The A7 Premium Plus has a starting price of $73,375 and comes with Audi's Virtual Cockpit system that displays maps and other information in the gauge cluster, HD-matrix LED headlights, as well as the Bang & Olufsen 3D Premium Sound System. A top-view 360-degree camera system, adaptive cruise control and other driver assistance features, and wireless smartphone charging are also included.

The A7 Prestige has a starting price of $77,275 and adds a head-up display, ventilated front seats, LED/laser headlights, four-zone climate control, and soft-close doors.

TL;DR The A7's in a tough spot because of its price and competition.

The A7 sits in an odd place in the Audi lineup but earns its keep as an excellent performer with top-grade tech and comfort features. Critics have heaped praise on the car, placing it on many top-10 and "must-buy" lists.

The car's premium price slots it into direct competition with the BMW 5-Series and Mercedes-Benz E-Class, both of which are less expensive and have much of the same technologies found in the Audi. However, those who like the style and more versatile design of the A7 may be convinced the price premium is worth it.

If we were buying an A7, our money would be spent on the mid-range Premium Plus trim. It gets the same tech and safety features as the range-topping Prestige trim while saving a few thousand dollars on the sticker price.