The BMW X7 is a large luxury three-row SUV, with seating for up to seven. It’s the largest SUV in BMW’s lineup and features some of the most opulent interior materials, highest levels of technology, and sophisticated off-road equipment.

For 2020, the X7 lineup adds the M50i variant with an additional 67 horsepower compared to the xDrive50i model, as well as upgraded suspension and brake components, 22-inch wheels, and specific styling modifications.

The lineup consists of the xDrive40i and its turbo six-cylinder engine, the xDrive50i and its turbo V8, and the aforementioned M50i. All models come standard with all-wheel-drive and an eight-speed automatic transmission with paddle shifters and sport mode. 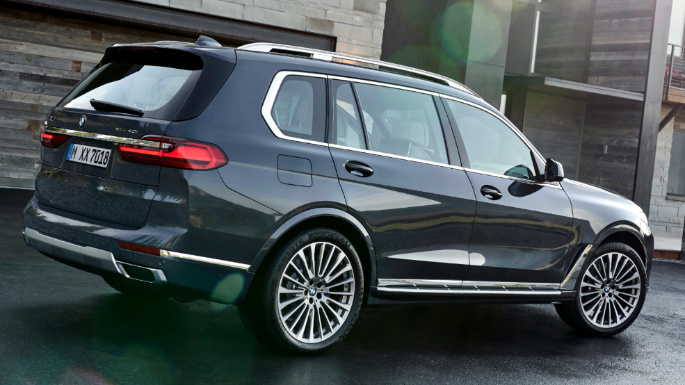 TL;DR: Bold styling may be polarizing, but it makes a statement among its peers. 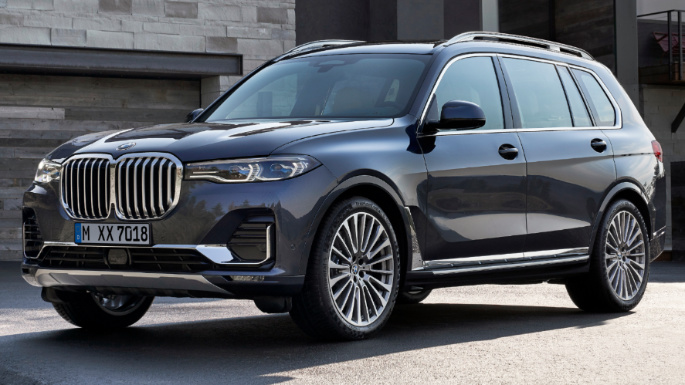 The X7 is the largest SUV BMW has made so far, and the exterior styling does nothing to hide its size.

Most people will notice the oversized take on the traditional BMW grille, which extends well into the front bumper. Some may consider it gallingly large, while others see it as aggressive and fitting of a large vehicle like the X7.

That imposing feeling continues with a very tall roof and upright shape, especially compared to the X5, which was up until recently the company’s largest SUV. That boxy shape noticeably mimics the X7’s immediate peers and helps increase interior space, especially in that third row.

The M50i variant gets a distinctive aerodynamics kit similar to other BMW M models, with a lower bumper design and aggressive side skirts. But all models get wheels no smaller than 21 inches, which is large even for this class of vehicle. 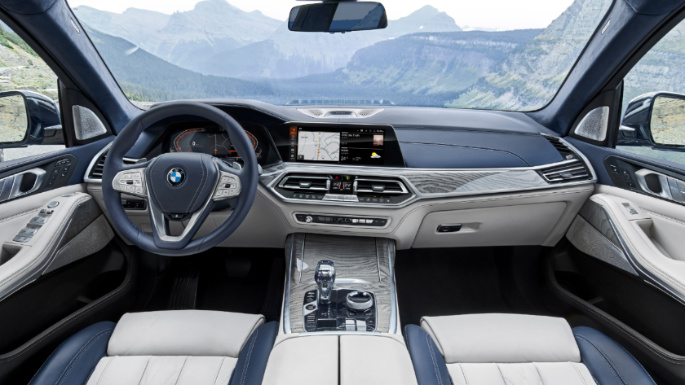 The BMW familial traits are more apparent inside, with a familiar layout and sumptuous materials befitting of a vehicle of this price.

Two 12.3-inch digital displays dominate the interior, one in front of the driver in place of conventional gauges, while the other is responsible for the iDrive infotainment system.

The rest of the interior oozes class thanks to soft surfaces throughout and high-quality materials. A stitched leather-covered dashboard and decorative glass for the gear lever and iDrive controller are options.

The base xDrive40i makes do with standard SensaTec synthetic upholstery for the seats, a choice that’s somewhat out of place in a vehicle that costs nearly $75,000 to start. At least heated 16-way power front seats are standard, and they can be upgraded to include ventilation. A 4-zone automatic climate control system is standard, which for 2020, can be upgraded to a 5-zone unit. 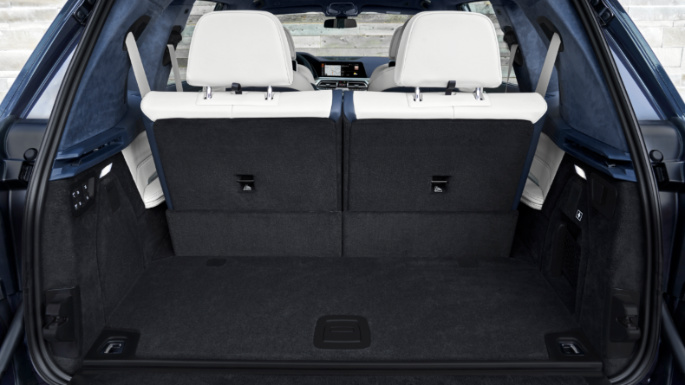 Being as large as it is on the outside, we expected the BMW X7 would provide generous space for passengers and cargo. And being available in three powerful configurations, hauling a lot of stuff shouldn’t be a problem.

All X7s have three rows of seats and a standard capacity of up to seven passengers. Optional second-row captain’s chairs reduce that to six but make it easier for kids to climb through to that third row. The Audi Q7 and Mercedes-Benz GLS max out at seven passengers, while the Cadillac Escalade, Lexus LX 570, and Lincoln Navigator can seat up to eight. Only the Land Rover Range Rover lacks a third-row seat.

With the second and third-row seats folded down, the X7 offers 90.4 cubic feet of space; with all the seats up, that falls to just 12.8 cubic feet.

The Mercedes-Benz GLS has 17.4 cubic feet behind the third row, even if outright space with all the seats folded falls a little short of the X7. The Audi Q7, Lexus LX 570, and Range Rover are substantially smaller than the X7, too. For the most usable space, it’s hard to beat the larger Cadillac Escalade and Lincoln Navigator. And the Navigator has the only third-row seat that’s remotely habitable for adults.

All others either lack head or legroom, including the X7. The second-row seats on this BMW also slide forward electronically to allow people to get into the third-row, but it doesn’t move far enough.

The X7 can tow between 5,400 and 5,950 pounds when properly equipped. That’s similar to most of its rivals, but the Cadillac, Lexus, and Lincoln can tow more.

TL;DR: The X7 comes with the sophisticated iDrive system and a raft of other tech goodies. 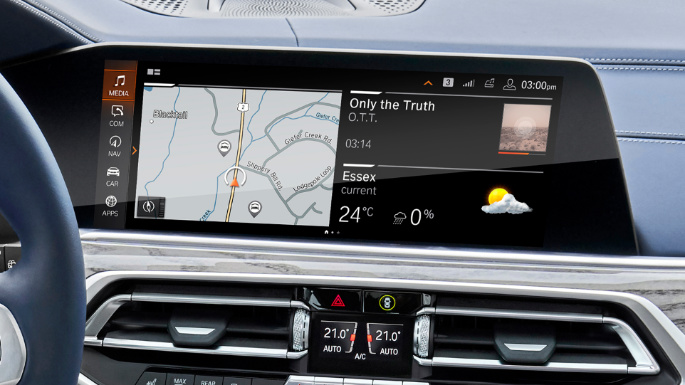 BMW’s latest iDrive infotainment system and numerous other technologies keep the X7 at the top of the class for those looking for the latest gadgets.

At the center of the X7’s infotainment operations is the 12.3-inch display to control iDrive 7.0, the most recent version of the company’s multimedia system. It’s controlled through a rotary knob on the center console, or by touch, voice commands, and even optional gesture controls that allow users to use their hand or fingers to motion if they want to change the audio volume or zoom in on the navigation map, for example.

All X7 models get standard built-in navigation and a wi-fi hotspot.

A digital driver’s display comes standard on the X7, too, in place of physical dials for the instrument panel. The display can be configured to display navigation directions or other infotainment functions right in front of the driver. The display isn’t as lavish as that on the Audi Q7 or Mercedes-Benz GLS, but it’s relatively comprehensive.

Also included is BMW Remote Services, with parking information, remote door unlock, and stolen vehicle recovery. There is a Qi wireless charging pad, as well as USB and USB-C ports. Apple CarPlay is included, but Android Auto is unavailable.

The standard audio system is a 10-speaker unit on the xDrive40i; a 16-speaker Harman/Kardon unit is optional on this model but standard on xDrive50i and M50i. A Bang & Olufsen unit is available on V8 models. 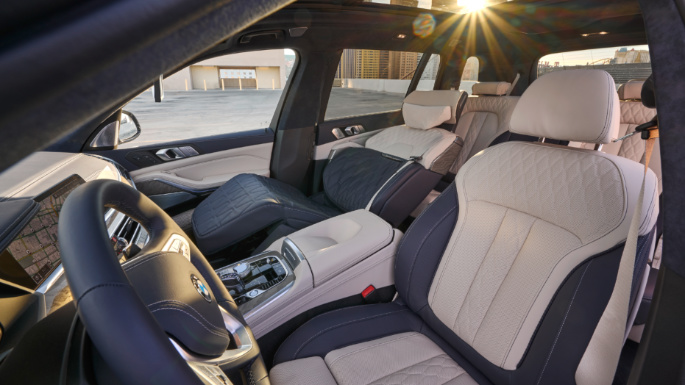 Neither the Insurance Institute for Highway Safety (IIHS) nor the National Highway Traffic Safety Administration (NHTSA) has yet crash-tested the BMW X7.

TL;DR: Stately and refined, but the X7 lacks the expected BMW sportiness. 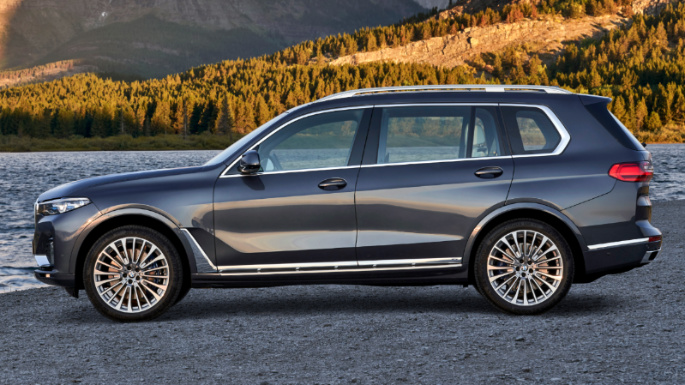 The X7 provides a cushy ride befitting of a luxury sedan, and it has the power of a large sports sedan. But it may leave driving enthusiasts wanting.

The base X7 xDrive40i comes with a 3.0-liter turbocharged six-cylinder engine with 335 horsepower and 332 lb-ft of torque.

All X7s are equipped with an eight-speed automatic and all-wheel-drive.

Power comes on strong on all models, especially on V8 models. All engines are smooth, and the transmission is exceptionally refined. The interior is hushed and free of noise from the outside, other than the faint exhaust sound. Switching the driving modes alters some of the shift points, but the X7 is potent in any mode.

Air suspension is standard and keeps the ride supple despite the 21 or 22-inch wheels. What it doesn’t do so well is keep the tall and large X7 from leaning excessively in corners. It’s generally too softly sprung, more so than the smaller X5, and its heft only further hinders any athleticism. While that’s par for the course among some of its rivals, it may alienate longtime BMW customers. The smaller Audi Q7 or even the Mercedes GLS may be the more sporting options in this class.

The X7 does offer an off-road package that includes various modes for different terrain, as well as a limited-slip differential and a front skid plate.

Those numbers are slightly better than most competitors with their six- and eight-cylinder engines. The six-cylinder Mercedes-Benz GLS 450 is rated at 19 mpg city and 23 highway, for example, although the more powerful GLS 580 bests the V8-powered BMW’s fuel economy. The turbo V6-powered Lincoln Navigator also fares worse in fuel economy than the six-cylinder X7, even in its two-wheel-drive configuration.

However, the Land Rover Range Rover is currently the only model in this class with a diesel option, with an EPA rating of 22 mpg city, 28 highway, and 24 combined, by far the best fuel economy ratings in this class.

TL;DR: Expensive, but so is everything else in this class. 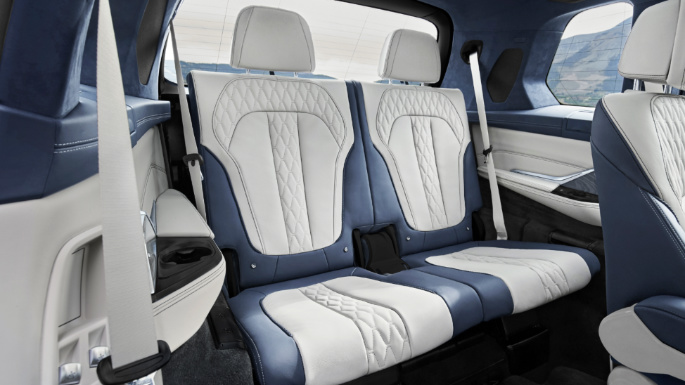 The Executive Package includes those features, as well as additional LED ambient lighting and heated and cooled cupholders.

An Off-Road Package includes various settings for different terrain, as well as a front skid plate and a limited-slip differential.

The X7 xDrive50i starts from $93,595 MSRP. It’s powered by a 4.4-liter twin-turbocharged V8 engine with 456 horsepower and 472 lb-ft of torque, also with an eight-speed automatic and all-wheel-drive. It gains soft-close doors, power rear-seat window shades, gesture control, leather upholstery, the 16-speaker audio system, automated parking assistant and 3-D surround-view camera, and the head-up display.
Options and packages are similar to that of the xDrive40i.

The top-line X7 M50i starts from $100,595 MSRP. On top of the xDrive50i standard features, it adds a more powerful V8 engine that is rated at 523 horsepower and 553 lb-ft of torque. The M50i also includes 22-inch wheels, upgraded suspension, brakes, and differential, Shadowline exterior trim, revised body kit, and front and rear bumpers, and a rear spoiler.

Optional features mirror that of the xDrive50i.

As far as big-dollar SUVs go, there is a lot to like with the BMW X7. And there had better be considering how easy it is to send the price tag into six figures.

The xDrive40i, while lacking the immediate power of the V8 models, is the best buy and can be equipped with nearly all of the features of the more expensive variants. But it’s still easy to watch the price escalate close to $100,000 with various packages. At least the X7 comes with a lavish interior that is universally praised, offsetting the opinion-dividing exterior styling. The infotainment technology, apart from the lack of Android Auto, is top-notch, and the materials throughout are sophisticated.

Third-row seat space should be better for adults, but it’s not the worst in the class. And it’s still disappointing the X7 lacks the handling agility that’s historically been a trademark of BMW’s SUVs.

Those who regularly tow or want the most cargo space will be happier with the American offerings, the Cadillac Escalade or Lincoln Navigator. Buyers searching for a sportier SUV should look at the Audi Q7 or even BMW’s X5. The X7 doesn’t quite beat any of its rivals in all categories, but it does a lot of things well.