Powertrain: A 310-horsepower, 3.6-liter V6 engine with a nine-speed automatic transmission and front-wheel-drive. 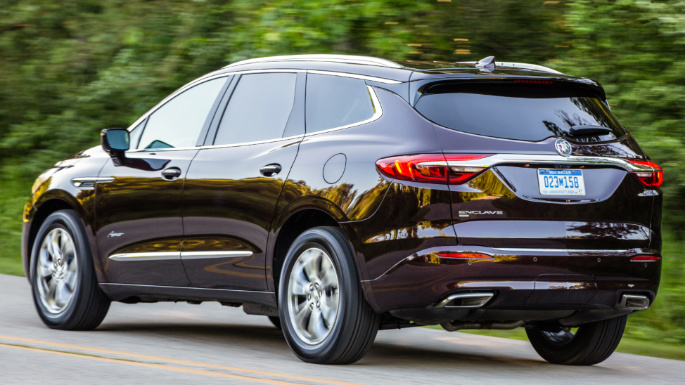 Since its introduction in 2008, the Buick Enclave has appealed to buyers who want a three-row SUV that can seat seven people – and not just four people comfortably and three more squeezed into the third-row seat. The Enclave was one of the first car-based SUVs to be truly spacious inside without being completely supersized. And as a bonus, it drove well compared to other vehicles and helped restore Buick’s image as a brand that was a cut above mainstream brands.

For 2020, the Enclave adds a Sport Touring package on the Essence trim level that includes a new grille design, body-colored exterior trim, and 20-inch wheels. An eight-inch touchscreen infotainment system is now available on all models with navigation and satellite radio, while Premium and Avenir trim levels add four-way power-adjustable lumbar support and a massage function for the front seats.

The 2020 Enclave is offered in four trim levels: Preferred, Essence, Premium, and Avenir. 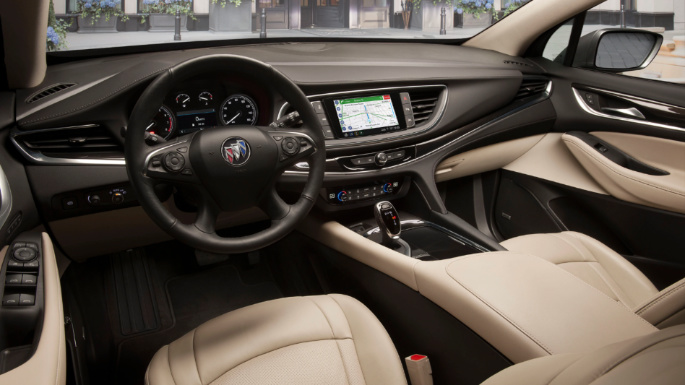 But that driver assistance technology only starts to appear on the $50,000 Premium model, and only the top Avenir model gets adaptive cruise control with more advanced automatic emergency braking, and as part of an option package.

The base Enclave model also lacks blind-spot monitoring with rear cross-traffic alert and rear parking sensors, and many more systems are available on rival models that cost less, or even as standard.

While the Enclave is ultimately safe, it lags behind the competition in terms of technology, especially among premium brands. 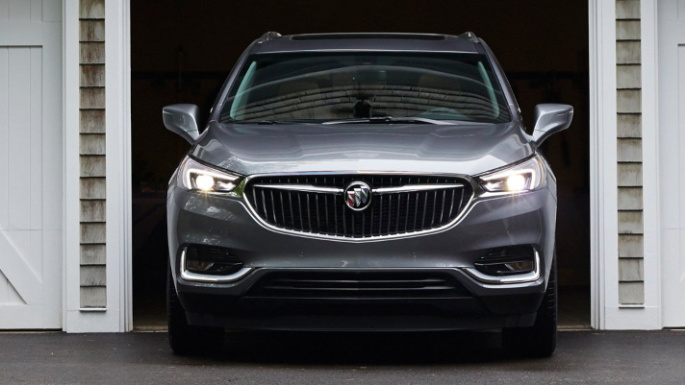 The Enclave sits somewhat between mainstream and luxury three-row SUV models, depending on the trim level. At around $41,000, the base Enclave Preferred is a close match for mid-level versions of the Honda Pilot and Volkswagen Atlas, as well as the related Chevrolet Traverse and GMC Acadia.

The Enclave comes standard with features such as heated front seats, a hands-free power liftgate, heated exterior mirrors, and an auto-dimming rearview mirror. But to get all-wheel-drive, buyers have to step up to an Essence model and spend at least $47,000, while adding leather upholstery and blind-spot monitoring.

But it’s easy to get an Enclave to $50,000 with just a few add-ons, making it on the more expensive end of mainstream three-row SUVs.

The better-equipped Enclave Premium and Avenir models start in the $50,000 mark, but at least include features such as ventilated and massaging front seats, built-in navigation, and premium audio.

A well-equipped Premium AWD is closely matched to an Acura MDX and Infiniti QX60 in terms of price while offering more space. It also looks like a good bargain compared to a Lexus RX 350 L, Lincoln Aviator, or Volvo XC90 T6, even though those vehicles offer a slightly more posh experience. 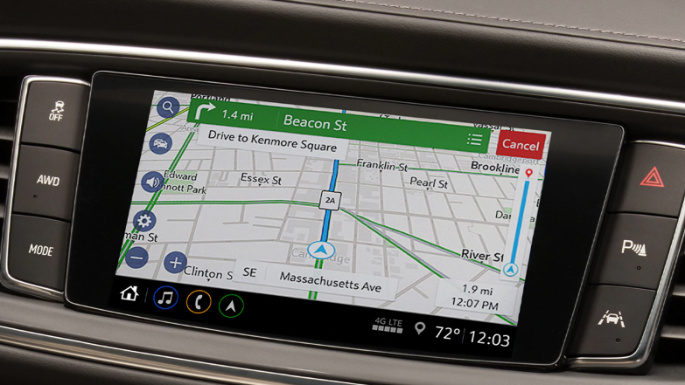 Every version of the Enclave gets an easy-to-use eight-inch touchscreen infotainment system. The screen in the Buick is bright and clear, with large icons on the screen, but also some physical shortcut keys to make navigating menus easier while driving. Apple CarPlay and Android Auto are standard, while there are two USB ports for each row of seats, six in total, and making sure nearly every seat has a place to charge a device.

Built-in navigation is optional on the Essence trim, standard on Premium and Avenir. And all models are also equipped with GM’s OnStar telematics system that includes turn-by-turn navigation and a 4G LTE wi-fi hotspot with subscription, as well as emergency calling services.

Most Enclave models are also available with features such as a 10-speaker Bose audio system and surround-view camera, while the higher-end versions can also be equipped with a rearview mirror and camera setup, which uses the mirror to switch between a physical mirror and a camera image. 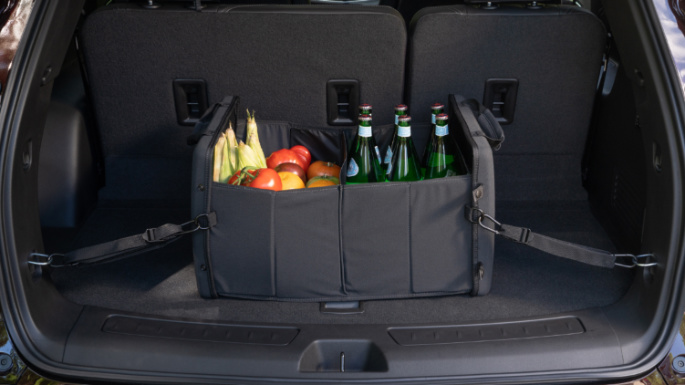 A vehicle as large on the outside as the Enclave is should be equally sizable on the inside, and the Buick doesn’t disappoint. Every model gets seating for seven, with second-row captain’s chairs and a sizable third-row seat for three. Adults will fit in all seats, too, something that’s a rarity in this segment. The second-row seats are mostly supportive, although the lack of an available split-bench seat is an oddity among SUVs. Still, it improves access to the third row, which also folds with one lever.

Even behind that third row, there’s a respectable amount of cargo space for some suitcases or soft bags. Fold the second and third rows down, and the Enclave offers immense cargo capacity, beat only by the similar Chevrolet Traverse, and not by much.

Among midsize SUVs, the Enclave is the most spacious vehicle this side of a minivan. A standard power liftgate with hands-free operation is also a bonus, while Premium and Avenir models get power operation of that third-row seat.

Towing capacity is 5,000 pounds maximum with the optional Trailering Package, which also includes a hitch assist system for the backup camera. That towing capacity is competitive for the class, although more powerful models of the Lincoln Aviator can tow more, as does the Dodge Durango with its optional V8 engine. 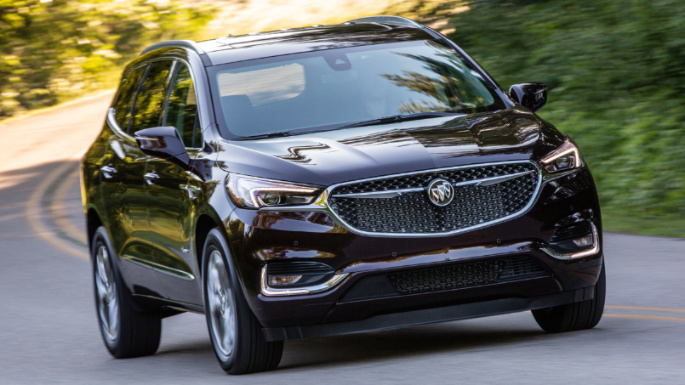 All but the top Avenir model comes standard with 18-inch wheels and plenty of brightwork on the outside, as well as LED headlights and bright roof rails. While that means a high-trim Premium model looks very similar to a base model, there are a number of different grille and wheel options to better personalize the Enclave no matter the equipment level.

Only the base Essence model does without leather upholstery. Unlike premium models, the Essence gets cloth upholstery that looks and feels out of place in a $41,000 vehicle. But power front seats and heated front seats are standard across the board, and Premium and Avenir models also get massaging and ventilated front seats. Still, the interior doesn’t have the ambiance of its premium rivals and feels too much like its Chevrolet and GMC stablemates. An optional power moonroof is available with rear skylights to brighten up the vast interior.

The posh Avenir model gets a bespoke grille treatment and more brightwork on the exterior to set it apart from other Enclave models. The interior also gets a little more attention, with upgraded leather upholstery and a wood-trimmed steering wheel. While it matches the Acura MDX and Infiniti QX60 with its premium look and feel, it can’t match the Lincoln Aviator or Volvo XC90 for true luxury. And at close to $60,000 fully equipped, it feels a bit overpriced. 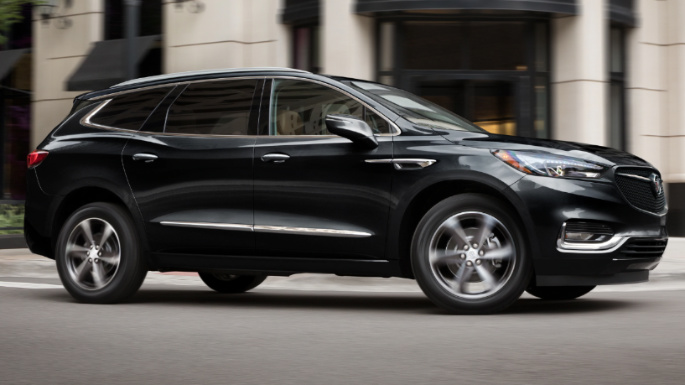 The Enclave’s calling card is a quiet interior and serene ride, and it more than delivers. Every Enclave uses laminated glass and plenty of sound insulation to keep road and wind noise to a minimum, creating Buick’s trademark library quiet cabin, even with the optional 20-inch wheels. It reinforces the Enclave’s premium brand credibility, providing an even quieter cabin than some models such as the Acura MDX and Volvo XC90, and giving the Cadillac XT6 a run for its extra money.

All Enclave models use the same 310-horsepower, 3.6-liter V6 engine with a nine-speed automatic. That number looks adequate on paper, but the Enclave weighs several hundred pounds more than some of its competitors. And other rivals use turbocharged engines that offer more power off the line. The Enclave has enough power, but it never feels effortless like a Ford Explorer or Toyota Highlander, let alone an Audi Q7, BMW X5, or Lincoln Aviator.

Considering it’s a large and tall vehicle, the Enclave’s handling is relatively competent. The ride is soft, but it isn’t couchlike, and there isn’t too much lean in the corners. The top-trim Avenir is available with an adaptive suspension to iron out more bumps, but it doesn’t seem necessary. The Buick’s bulk is most felt in tight spaces, where parking becomes a hassle even with standard rear parking sensors and an available surround-view camera. The visibility isn’t especially great, either, so parallel parking will be a hassle. 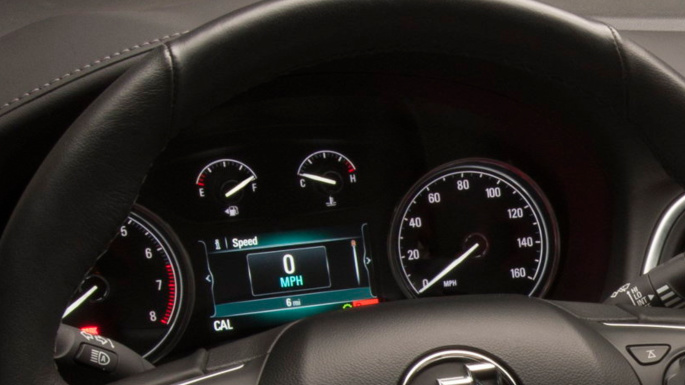 The 2020 Enclave with front-wheel-drive is rated by the Environmental Protection Agency (EPA) at 18 mpg city, 26 highway, and 21 combined. Adding all-wheel-drive drops each of those ratings by one mpg.

The Enclave’s fuel economy is mostly competitive, given its size and standard V6 engine. Automatic start/stop on all versions improves things somewhat. But the Acura MDX, Ford Explorer, Lexus RX, Lincoln Aviator, and Volvo XC90 are all more fuel-efficient and are also available with hybrid powertrains. Buick doesn’t offer electrification of any kind of the Enclave. 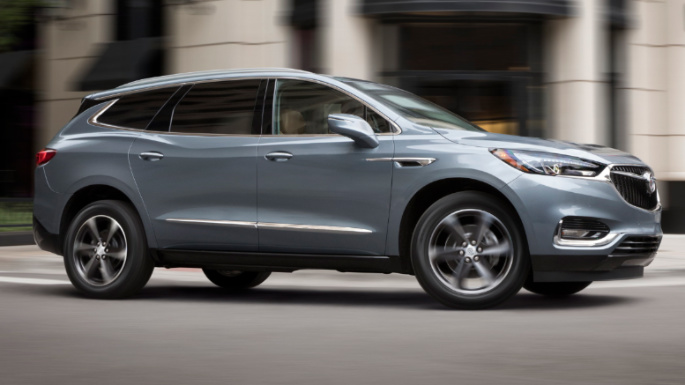 A cargo cover and net, 20-inch wheels, and upgraded paint are options.