Vehicle Type: The 2022 Buick Enclave is a midsize three-row SUV capable of seating up to seven passengers.

Powertrain: Only one powertrain is shared across all Buick Enclave trim levels.

Each model comes standard with a 3.6-liter V6 engine that produces 310 horsepower and 266 ft-lb of torque.

A nine-speed transmission is also standard across the board with front-wheel drive as the default drivetrain for each Enclave model.

All-wheel drive is optional on each trim level for an additional $2,000.

GM updated the Enclave with a mid-cycle refresh for the 2022 model year. They have made subtle styling changes to the lights, wheel options, and bumpers all around. On the inside, the lever-style shifter has been replaced with buttons, and the center console has been updated in the process.

New safety features have also been added to the standard lineup, including blind-spot monitoring, lane-keeping assist, and forward collision. Tech features like adaptive cruise control and a head-up display have been made optional, and Apple CarPlay and Android Auto now have wireless capability.

Lastly, there have been some trim-level updates. The previous base trim, the Preferred, has been dropped from the lineup, making the Enclave Essence the new base trim. The top-of-the-line Enclave Avenir has been given some extra primarily visual luxury touches to further separate it from the rest of the lineup.

Would we buy one? We might. The Enclave is caught between the luxury and non-luxury midsize SUV segments and there's a lot of tough competition in those segments. On its own it's an impressive SUV -- and we love the refreshed styling -- but it has trouble beating some of its competitors. 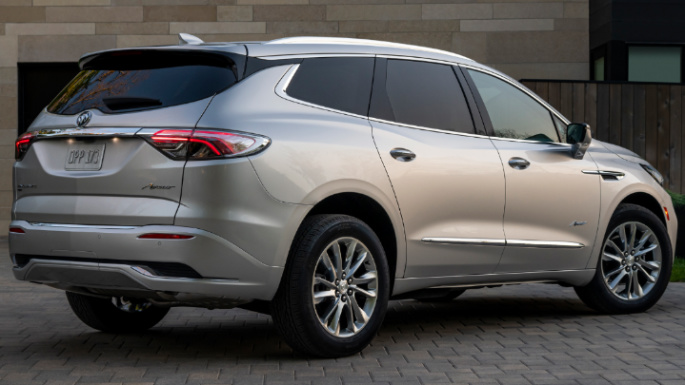 The Buick Enclave is only in its second generation of production, even though it has been on the market since 2008. Its redesign in 2018 has kept it relevant in a tightly crowded midsize crossover SUV segment, and its latest refresh has brought in new standard tech and safety features necessary to be competitive.

It competes against other three-row midsize crossover SUVs like the Kia Telluride, Toyota Highlander, Hyundai Palisade, GMC Acadia, Subaru Ascent, Volkswagen Atlas, Mazda CX-9, Honda Pilot, Chevrolet Traverse, Jeep Grand Cherokee, and Nissan Pathfinder. Despite being GM’s luxury brand, Enclave does not quite keep up with entry-level luxury brands like Acura or Infiniti, and it certainly cannot compete with the likes of BMW, Audi, and Mercedes-Benz.

The Enclave is not a bad SUV, though. It features a superiorly comfortable ride, one of the most spacious interiors in the class, handsome exterior styling, a newly bolstered list of standard features, and comfortable seats in all three rows. It is truly a well-rounded SUV, but when considering its price, buyers may have a hard time not looking at other options like the Hyundai Palisade, Kia Telluride, Mazda CX-9, or Honda Pilot to get more bang for the buck. 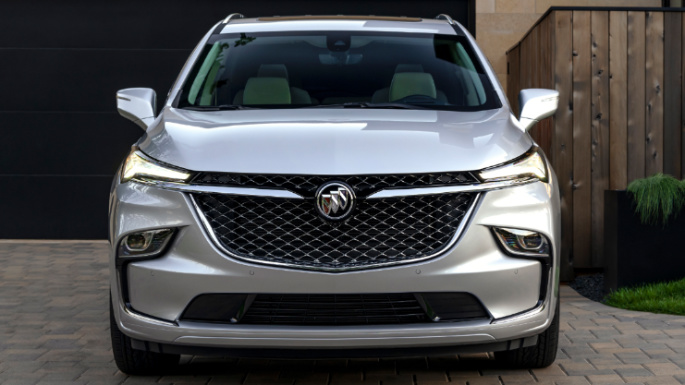 Although the Enclave’s long list of standard features helps it out in the value department, the only other midsize SUV that comes close to its high starting MSRP is the Jeep Grand Cherokee L. It still undercuts the Enclave by about $2,000. The Grand Cherokee L has a higher top-end price, but at baseline, it is also well-equipped, it has a more luxurious interior, and it is generally more capable.

Competitors like the Hyundai Palisade and Kia Telluride have really rocked the midsize crossover SUV segment. They present some of the best new car values across the board, they feature excellent interiors, they offer many of the same tech and safety features as the Enclave, and they undercut its price by thousands.

Other things that bring down the Enclave’s value proposition are its relatively weak resale value and comparatively short warranty. Competitors like the Toyota Highlander, Honda Pilot, Kia Telluride, Hyundai Palisade, and Subaru Ascent have traditionally been much stronger on the resale front in past years despite the Enclave’s well-roundedness. Many also come with longer warranties. 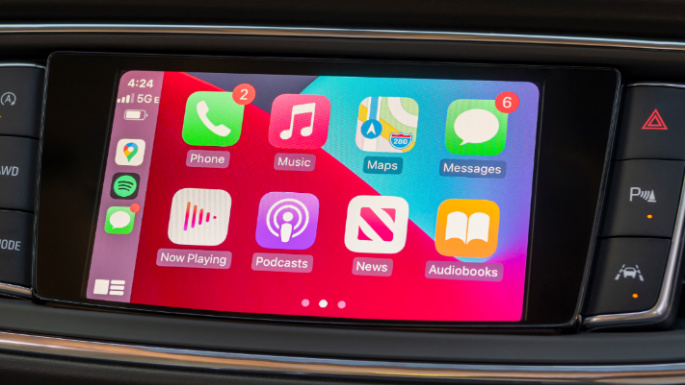 The Enclave does well in the class on the tech features front, especially after its refresh this year. Even though a couple of competitors have bigger and better tech features, the Enclave has a wide variety of standard features most people can use. Its list of optional features is also quite impressive compared to some competitors. 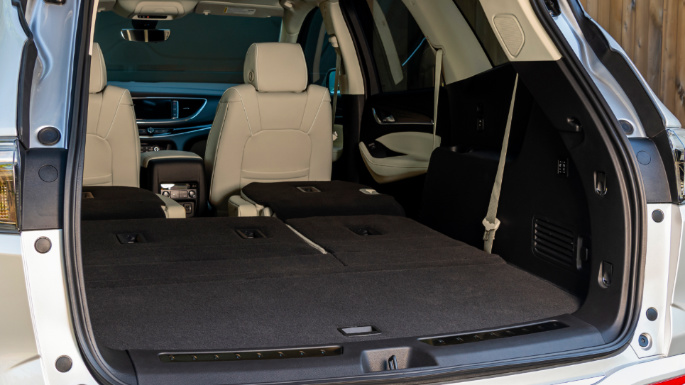 Practicality is where the Buick Enclave thrives. It is one of the largest SUVs in the class with 23.6 cubic feet of cargo space behind the third-row seats and 57.7 cubic feet with the third row folded. Of course, the power liftgate helps when you have a handful of luggage, groceries, or other cargo. The Enclave only misses a perfect practicality score because of its average maximum towing capacity, its seven-seat capacity as opposed to eight, and its responsive but otherwise mundane infotainment system.

The standard second-row captain’s chairs make entry into the third row of seats much easier than would a bench seat. Picking at seven-seat capacity versus eight is just that - picking. And complaining about the infotainment system is the same. The one that comes standard in the Enclave is good without being stellar. Knobs and buttons are also present to bypass some of the layered menus.

A huge benefit of all that interior space is that passengers can be comfortable just about anywhere they sit, including the third row. As one of the larger midsize SUVs, the Enclave is designed to be comfortable for just about anybody in each row. Even larger third-row passengers can easily get by on short trips without wishing they were elsewhere. 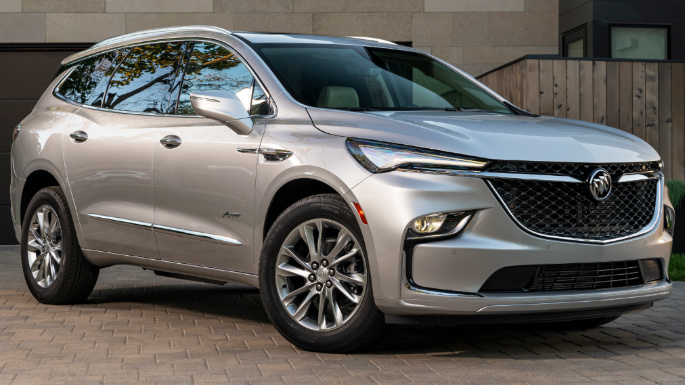 Exterior styling is one element within this category that gets high marks. While subjective, the Enclave is a handsome SUV. Its smooth lines give it character and a refined look without making it look bulbous, and the upgraded 20-inch wheel options give it balance.

The interior is a different story. While everything is accessible and easily laid out, the Enclave’s price tag exceeds what it is able to give. The interior’s quality is lacking compared to less expensive competitors. Fit-and-finish is also a little behind the curve for what you pay.

To get the best out of the SUV, you will have to get into the top-tier Enclave Avenir trim, but even then, it just does not feel as special as it should. Additionally, although its interior design is fairly minimalistic, it feels like it is lacking in overall character compared to competitors like the Mazda CX-9 and Jeep Grand Cherokee L. 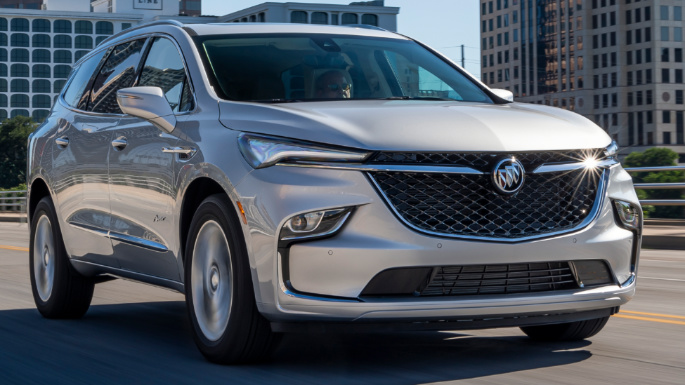 The Enclave’s driving dynamics are nothing to write home about, but it accomplishes what it was designed to do: Transport up to seven passengers from point A to point B in comfort and without any frills. Its 310-horsepower V6 engine is adequate to power a vehicle of its size, but it will certainly not win any races.

Acceleration and braking are both handled without much effort, and handling is also adequate considering the size of the vehicle. The only time confidence is lost is when doing quick maneuvers around a corner, something that will most likely not happen during normal driving.

The nine-speed transmission shifts effortlessly, and the engine is quiet, delivering all passengers to their destination in comfort. This is exactly what the Enclave is designed to do, and there is not any additional flair or gimmicks that accompany any given trip. 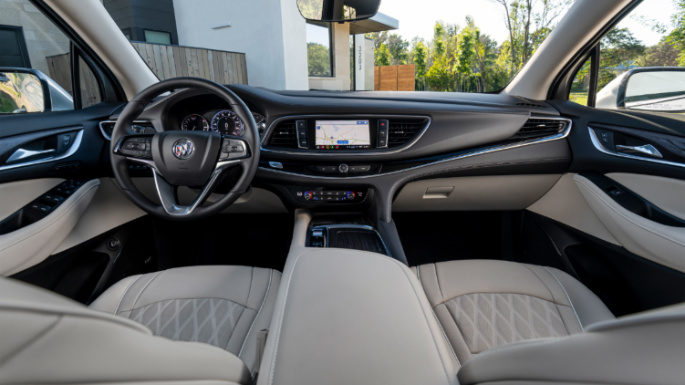 At the time of this review, the NHTSA has awarded the 2022 Enclave a rollover rating of four out of five stars but has not fully reviewed it in other crash tests. The IIHS has more complete ratings, and they have awarded the Enclave a score of good in all evaluated areas except for the child LATCH system ease of use. It earned an acceptable rating.

Optional features include a 360-degree surround-view camera, adaptive cruise control, and a rearview mirror with an integrated camera. 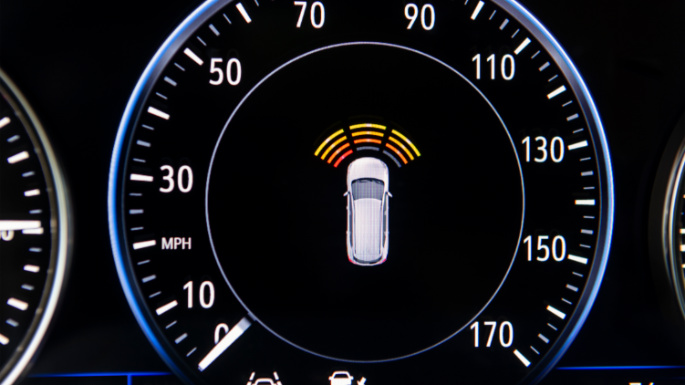 The Enclave’s fuel economy is adequate for the segment, but without any hybrid or electric options, it does not get out of the average range. With only one engine option, fuel economy fluctuates based on the chosen drivetrain.

In our 373 miles of testing an AWD model, we averaged 17.6 mpg -- and that was for an even mix of city and highway driving.

Some competitors like the Jeep Grand Cherokee and Dodge Durango fall below the Enclave’s fuel economy numbers, but many SUVs like the Honda Pilot, Kia Sorento, and Toyota Highlander return much better fuel economy estimates. 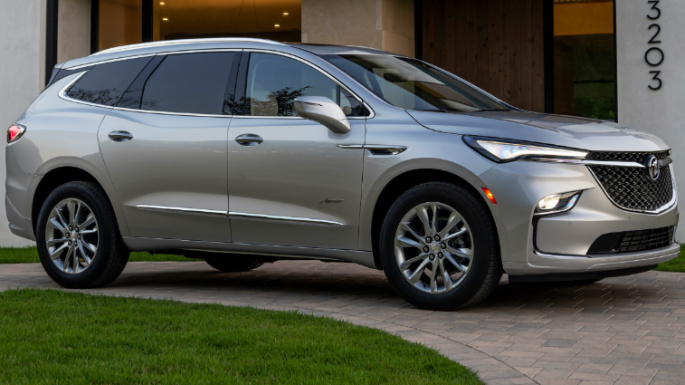 All Buick Enclave models get the same 3.6-liter V6 engine. It produces 310 horsepower and 266 ft-lb of torque and is paired with a nine-speed automatic transmission. Front-wheel drive is standard on all trim levels and all-wheel drive can be added to each for an additional $2,000.

Buyers can choose a number of additional packages including a trailering package, touring package, sport-touring package, floor liner package, interior package, roadside safety package, and cargo package. Many of these options add small details and features that enhance everything from interior styling touches to the grille design to wheel options.

The most notable packages include the sounds and sites package for $1,555, the technology package for $1,450, and the experience Buick package for $2,795. The sound and sites package adds navigation and a 10-speaker Bose audio system. The technology package features adaptive cruise control, a surround-view camera system, a rear camera mirror, a rear pedestrian alert, and enhanced emergency braking. The experience Buick package adds a moonroof and fixed rear skylight.

The Buick Enclave Premium starts at $50,995 with the destination fee included. Adding the AWD option brings the price to $52,995.

The Buick Enclave Avenir is the top-of-the-line trim level, and this is what we tested. The Avenir starts at $56,295 for FWD Avenir models and $58,295 for AWD Avenir models. The $1,195 destination fee is included in both of these prices.

Standard features include everything from the Essence and Premium trim levels plus adaptive cruise control and a panoramic sunroof.

The optional features on the Enclave Avenir are narrowed further by the additional standard features. Packages like the roadside safety package, interior protection package, trailering package, cargo package, and floor liner package are still available, but the Avenir technology package is the most prominent. For $1,595, buyers get adaptive suspension and more stylish LED headlights.