The Buick Enclave is a four-door, three-row, midsize family crossover SUV. It is made by Buick, a near-luxury brand owned by General Motors. It shares a platform with other GM vehicles, including the Chevrolet Traverse and GMC Acadia.

The Enclave was first introduced for the 2008 model year when it replaced two previous Buick SUVs, the minivan-based Rendezvous and the truck-based Rainier. It also replaced the Terraza minivan.

It is currently in its second generation. It sits atop Buick's crossover lineup, with the compact Envision and subcompact Encore models below it.

The Enclave is more expensive than rivals like the Chevy Traverse and the Honda Pilot but cheaper than the Acura MDX and Audi Q7. Other competitors in its class include the Infiniti QX60, Mazda CX-9, Dodge Durango, Lincoln Nautilus, and Volvo XC90. 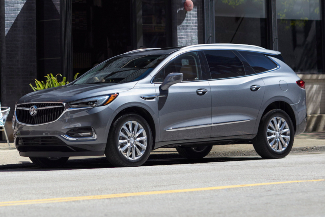 For 2022, Buick gave the Enclave a midlife refresh. Changes to the exterior include modernized front and rear bumpers, redesigned wheels, updated exterior lighting elements, and a revised center console with a new push-button shifter. The top-of-the-line Avenir receives a luxurious boost with an all-new exterior trim, massaging front seats, quilted leather upholstery, and new wood inlays for the cabin.

The rest of the model lineup for 2022 benefits from a host of newly standard driver assistance features, including lane-keeping assist, blind-spot monitoring, automated emergency braking, and automatic high-beams. Optional safety features for 2022 include a head-up display, adaptive cruise control, and a rear pedestrian alert feature.

Finally, the 2022 Enclave welcomes an upgrade to the standard Apple CarPlay and Android Auto, which now have wireless connectivity.

This second generation of Buick's Enclave came on the heels of the release of the newer (and now smalled) Envision crossover. The arrival of the Envision in the lineup meanst Buick could make this new second-generation Enclave larger and more luxurious.

The Enclave is now constructed on a GM platform shared with the three-row Chevrolet Traverse and the shorter Cadillac XT5 and GMC Acadia (unlike the previous generation, GMC made this generation of Acadia smaller than the Traverse and Enclave).

The new Enclave's design is less egg-shaped than the previous generation and now features an upscale profile. The exterior design was more aerodynamic and featured the new Buick mesh grille with chrome wings.

The new engine for this generation is a 3.6-liter V6 paired with a nine-speed automatic transmission to produce 310-horsepower and 266 lb-ft of torque. Front-wheel drive is standard, and intelligent AWD is optional. The latter featured a twin-clutch rear differential, making it an interchangeable AWD system.

The second generation offers four trim levels, including the Base, Essence, Premium, and the Ultra-Premium Buick Enclave Avenir sub-brand. The Base trim offers a fairly loaded interior with captain's chairs in the second row, power front seats, climate control with three zones, a rearview camera, Bluetooth, and a six-speaker sound system.

Outside, the Base trim offers a remote start, power liftgate, roof rails, LED lights, and 18-inch wheels. This trim is only available with front-wheel drive. The Essence trim includes an option for AWD. Inside, it features leather upholstery with a choice of three colors. Optional equipment includes 20-inch wheels and a panoramic sunroof.

This allows for an almost completely flat floor for more convenient hauling. Several additional safety features are also available on this trim, such as automatic emergency braking, front and rear parking sensors, and following distance indicators.

The final top trim of the Enclave is the Avenir trim, meaning "future" in French. The Buick Enclave Avenir is considered a luxury sub-brand of Buick, which the automaker introduced on specific models starting after 2017. These vehicles feature additional exterior upgrades, Avenir logos and badging, and an optional tech package featuring improved suspension and adaptive cruise control. 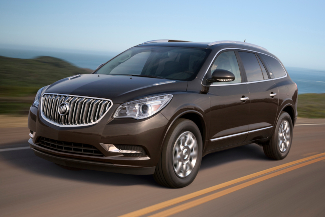 The first-generation Enclave was introduced for the 2008 model year. It was built in both the United States and China. It offered seven-passenger seating as standard, with two captain chairs in the second row. However, a second-row bench seat was an option and increased the seating capacity to eight passengers.

The Enclave came standard with front-wheel drive; however, all-wheel drive was an option. Built on the GM Lambda platform, it shares the same platform with the Chevrolet Traverse, GMC Acadia, and Saturn Outlook.

In its first year, the Enclave offered a 3.6-liter V6 engine paired with a six-speed automatic transmission, which produced 275-horsepower.

Buick upgraded the engine for the 2009 model year to a 288-horsepower, 3.6-liter V6 Spark Ignition Direct Injection VVT. The upgraded engine gave the Enclave a broader torque curve and increased its fuel efficiency. The Enclave was rated at 17 mpg in the city and 24 mpg on the highway for FWD models. AWD models got 16/22 mpg city/ hwy.

The Enclave garnered accolades for its oversized cargo area. It also received praise for its quiet and well-designed interior. Unfortunately, it was criticized for weighing almost 5,000 pounds and for its six-speed automatic transmission's hesitancy in downshifting.

The Enclave received a facelift for the 2013 model year, which included a slightly redesigned exterior with a chrome grille and LED exterior lights, as well as Xenon headlights. The interior added some luxury touches, including softer materials on the dash, chrome and wood accents, a touchscreen infotainment system display, and blue ambient lighting.

Buick upgraded the safety features to include seven airbags and blind-spot monitoring. At the time, the front-center airbag was the first in the industry.