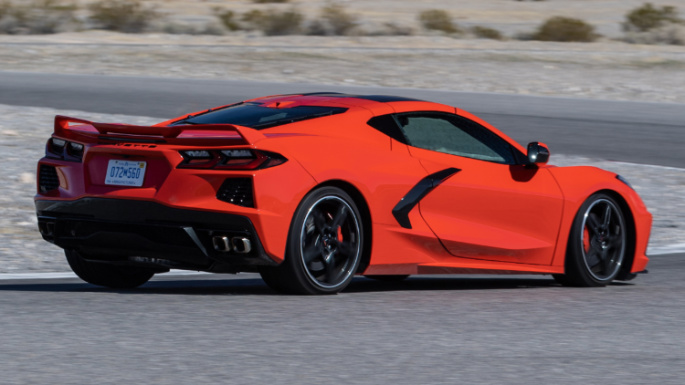 2020 marks the beginning of the new eighth-generation (C8) Corvette.

The new Chevy Corvette Stingray is America’s beloved, high-end sports car that offers a lot of bang-for-the-buck over its European competition, such as the Porsche 911, Mercedes AMG-GT, BMW M4 and Audi's R8. It is also General Motors competition for Ford’s Mustang Shelby GT 500, and Dodge’s Challenger Hellcat.

The new 2020 Corvette is brand-new from the ground up; it rides on a new midengine platform; a first in the Corvette’s long history of front-engine placement and a move that puts the Corvette in the same league as some of the world's best supercars.

The base price is $58,900 for the base 1LT trim without any added options.

Behind the driver sits a 6.2-liter V8 engine producing 490 horsepower in the 1LT, with various trim levels and packages are available to increase performance, both modest power increases and in terms of handling.

The base car comes with heated and vented power seats, a leather steering wheel, LED headlights, heated side mirrors, keyless entry and start, 13 cubic feet of cargo space, a 107.2-inch wheelbase, and a removable hardtop.

Rear-wheel drive is the only option available in 2020.

Additional higher-performance models will be introduced throughout this C8's lifespan, with some likely to top the 1,000 horsepower mark. 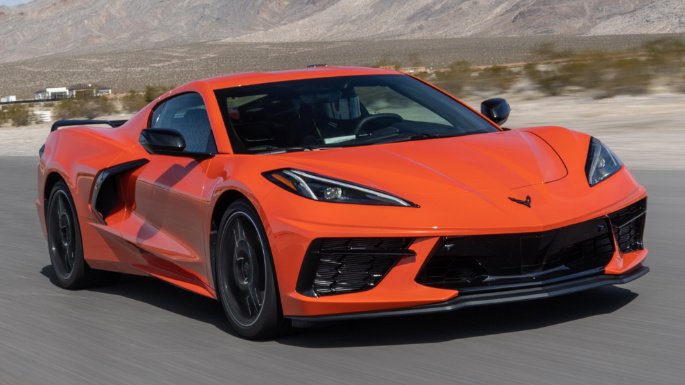 Reviewers generally found the styling to be athletic and resembling design language that is more common on supercars produced by Ferrari, McLaren, and Lamborghini.

Since the 2020 Chevy Corvette is a new generation with a new engine layout, the body dimensions are significantly different from the previous, 2019 C7-generation Corvette.

TLDR: All-new interior that is driver-focused and generally roomy for a 2-seat sports car. 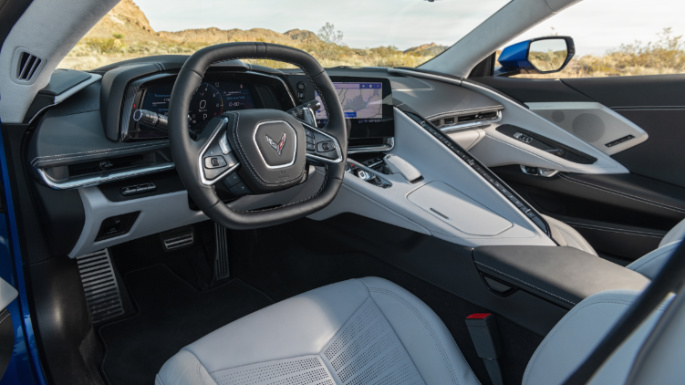 Like the rest of the car, the 2020 Corvette Stingray’s interior is all-new. It features stitched leather and various high-quality surfaces. The steering wheel is squared off at the bottom, which some reviewers found to be motorsports-like, the controls are all driver-focused, and are laid out in a cascading fashion that some reviewers found to be reminiscent of a fighter jet.

Everything comes together as a clean, aesthetically-pleasing package. Carbon fiber trim pieces for the center console, door cards, and more are included on higher trims.

For the performance-minded, there is an available Performance Data Recorder that records driving telemetry, as well as on-board video, for those looking to take the Corvette to the track.

Reviewers also found the interior to be spacious compared to other 2-door sports cars on the market. Visibility is good, with blind-spot monitoring filling in any gaps.

Everyday driving in the more comfortable driving modes like Eco or Touring creates a well-dampened, comfortable ride that some say gives McLaren a run for their money.

TLDR: Lots of space in the front trunk and slightly-unconventional rear trunk for a mid-engine sports car.

Offering 12.6 cubic feet of cargo space -- slightly less than some mid-size sedans on the market -- the C8 offers its passengers more space for road trips and everyday practicality. The rear trunk sits behind the engine, under the rear hood and it was designed to easily hold two golf bags. This is also where the removable hardtop resides with a little room to spare. 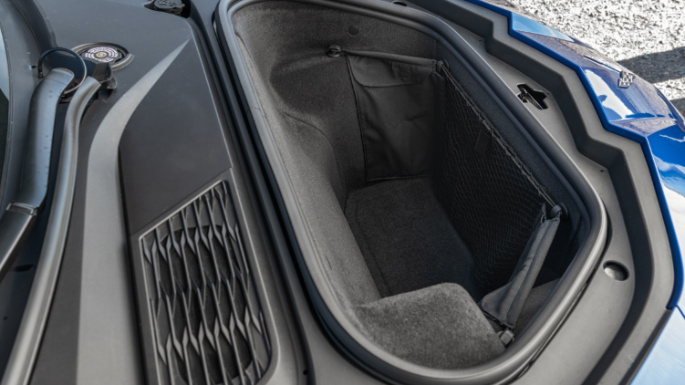 Legroom measures in at 42.8 inches, headroom is 37.9 inches with the roof on (and naturally a bit more with the roof off). This is all thanks to the engine being behind the driver, allowing for more forward space. Reviewers found it to be more spacious than both previous-generation Corvette Stingrays, as well as the C8 Corvette’s direct competitors. 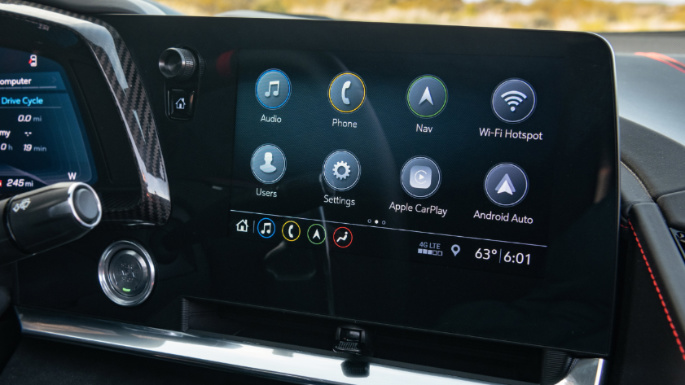 The gauge cluster in front of the driver is a configurable 12-inch digital screen with an available heads-up display for the base of the windshield.

The eight-inch infotainment screen comes with voice recognition, AM/FM radio, both Apple CarPlay and Android Auto as standard, as well as a 10-speaker Bose stereo system. HD radio is also standard, and a three-month trial of XM Radio comes with it from the showroom floor. The Bluetooth can stream up to two mobile devices, and all trim levels come from the factory with 4GLTE hotspot capability.

Reviewers noted that the climate control system was quite good.

Navigation does not come as standard on the base 2020 Corvette, though it does come in the next level 2LT trim, as does a phone charging pad.

Included in the long list of tech options is Chevrolet’s Performance Data Recorder, which allows drivers to record data and video on the racetrack.

An intuitive backup camera is mounted on near the top of the rear hood and feeds to a screen that in higher-trims resides in the rear-view mirror with the press of a button in higher-trim models.

An available GPS-linked nose lift system is available; when the nose lift is enabled to clear high-incline driveways, the GPS location is saved for future reference.

As part of the Z51 package, the Corvette Stingray can be configured into what Chevrolet calls “Stealth Mode,” meant for night-time driving on pitch-black roads. This turns off all displays, including the instrument panel, with only speed, fuel level, and coolant-temperature visible in the heads-up display. 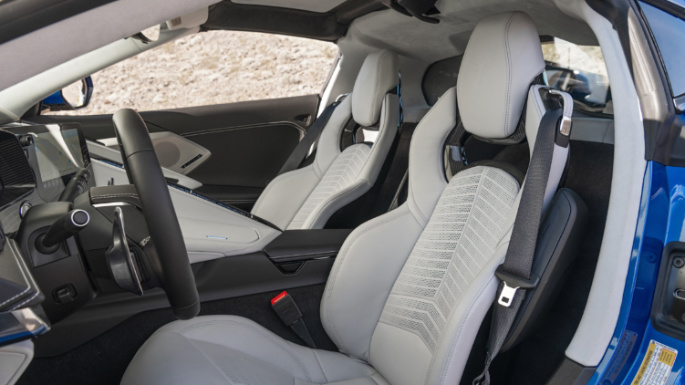 At this time, the 2020 Chevrolet Corvette Stingray has not been crash-tested by the IIHS or NHTSA.

The interior comes equipped with frontal and side-impact airbags on both the driver and passenger side, with Passenger Sensing System to ensure they do not deploy unnecessarily in the event of an impact.

In less-than-ideal driving conditions, the Corvette senses and adapts to road conditions, distributing power accordingly to the rear wheels. Active handling stability control, traction control, and ABS ensure drivers are able to move through poor weather with caution and control.

OnStar connectivity comes as standard across at trim levels, as does a backup camera, rear cross-traffic alert, blind-spot monitoring, and cruise control.

Such technology as adaptive cruise control, automatic emergency braking, and lane-keeping assist are not available.

The 13.6-in front and 13.8-in rear vented disc brakes stopped the 3647-pound Corvette from 70 MPH in 149 feet, a slightly longer space than the previous-generation.

TLDR: Tons of capability and performance, further solidifying it as a bargain over its higher-priced competition. 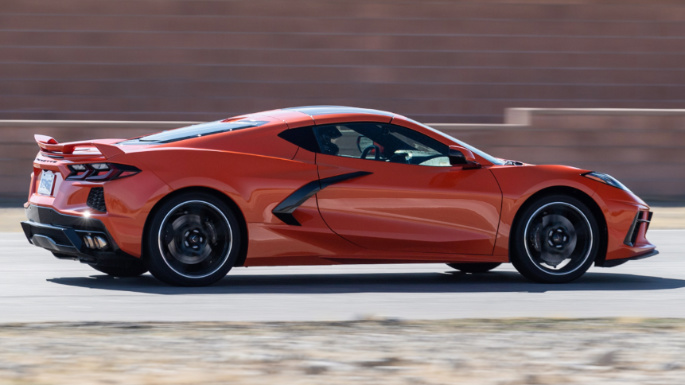 The new Corvette Stingray does not disappoint behind the wheel, giving drivers a mid-engine supercar experience for less than $100,000.

The engine behind the passenger compartment cranks out an impressive 490 horsepower and 465 lb.-feet of torque. That’s pretty impressive for a naturally aspirated, 16-valve, push-rod 6.2-liter V8.

This engine is good for a 0-60 MPH time of 2.8 seconds, according to ‘Car And Driver,’ as well as ‘MotorTrend;’ which helped the C8 Corvette Stingray win ‘MotorTrend’s” 2020 Car of the Year’ award.

The squared, racing-inspired steering wheel, driver-focused controls on the center console, and unobtrusive touchscreen ensure drivers will be at ease behind the wheel of this Corvette.

The eight-speed, dual-clutch automatic transmission may only be the only transmission offered, but it is a quick-shifting unit that holds its own against its competition. Drivers reported that the paddle shifters felt great and were well-positioned too.

There is talk that a manual transmission could be offered in the future to satisfy the three-pedal-loving performance purists around the world but Chevy hasn't confirmed this.

Reviewers noted that the exhaust note can be very quiet. According to ‘Car And Driver,’ it is three decibels quieter at 70 MPH over the previous-generation Corvette.

Just like the previous generation C7, the C8 Stingray features composite body panels and an aluminum chassis to cut down weight and improve chassis rigidity, which translates to better overall handling.

Skidpad grip is impressive: 1.03 Gs, though this is a tad lower than the previous generation’s 1.08 Gs.

With six driving modes available, this Corvette transforms from a comfortable highway tourer to a corner-hunting, race-inspired beast with just the push of a button, thanks to technological improvements like the suspension’s magnetic dampers.

Throttle response is improved, and with the optional FE4 damper package, fine-tuning stability control is possible for those seeking on-track fun.

Reviewers noted that cornering grip was excellent, although steering feel was not as good as a Porsche 911’s or McLaren 720s’.

The overall ride quality was very good across all modes, albeit this generation exhibited more understeer than previous generations.

Thanks to its eight-speed automatic gearbox, the Corvette’s fuel economy is good for a modern, performance V8 engine under the hood of a 3,647-lb. vehicle. Fuel economy is rated at 15 MPG city, 27 MPG highway.

Fuel-saving tech such as cylinder deactivation (known as Active Fuel Management in GM’s catalog) and lower shift points are present when set to Eco mode. This increases overall fuel economy, and drivers are able to keep track of their MPGs with an Eco Index Display in the gauge cluster.

TLDR: With a base price of just $58,900, with many trims and options available. 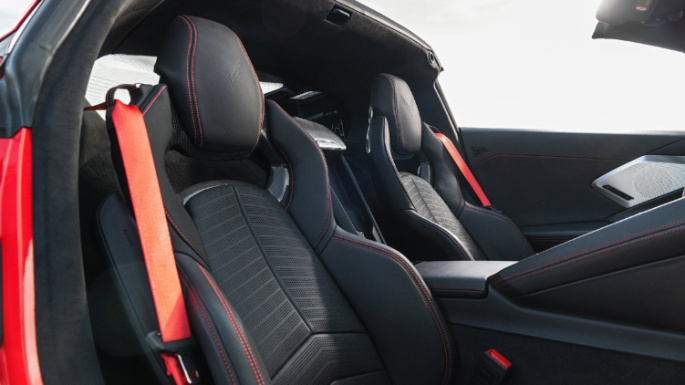 This Corvette C8 starts at $58,900 for the base model 1LT trim, helping solidify its title as a budget supercar. It comes standard with heated and ventilated power leather seats and a leather steering wheel. The LED headlights possess accented daytime running lights, heated side mirrors come finished as color-matched. Keyless entry is standard.

Next up, the 2LT starts at $67,295 and adds the above-mentioned navigation and Bose 14-speaker audio system. It also comes equipped with a front-facing camera to accompany the rear camera making parking a bit easier.

The Performance Data Recorder mentioned above is included, as is the heads-up display. Such conveniences as cargo nets, memory settings for the seats, and a heated steering wheel are also included.

The 3LT starts at $71,945; this is where the most luxury can be found: better-bolstered seats, carbon fiber accents, leather dashboard, leather door panels, and a leather center console. Faux suede replaces substantial plastics as covering the door trim, sun visors, headliner, a-pillars, and various other surfaces.

The $5,000 Z51 Performance Package is for those seeking even better performance, some nice styling upgrades, and is optional on any Corvette trim. On its long list of performance goodies are a louder exhaust system, larger Brembo brakes, an electronic limited-slip differential with a shorter final driving to improve acceleration, and more solid, performance-oriented suspension.

Immediately noticeable styling upgrades include a lower front splitter and bigger rear spoiler. Cooling systems are also improved to meet the needs of prolonged track driving. Tires that are included with the Z51 Performance Package are sticky, track-friendly Michelin Pilot Sport summer tires. Top speed is rated at 184 MPH, too.

Finally, there’s the Corvette convertible, which starts at $67,495 for the 1LT; it’s also available in the 2LT and 3LT trims.

All Corvette trims may already come with a removable roof, but the convertible automatically slides it out of the way with just the press of a button. Cargo space remains the same, it’s a hardtop as opposed to a soft top, and the engine cover is a solid panel as opposed to a window. However, passengers have the ability to roll down the rear window to enjoy the symphony of the 6.2-liter V8 a bit more.

The Corvette has been America’s answer to European sports cars for over 60 years. This latest generation is a major update, and a long-awaited leap forward to maintain its status as an incredible value over the competition.

With a great mix of styling, an excellent infotainment system, ergonomics, lots of cubic feet of cargo space, reasonable fuel economy, and performance, buyers will be able to experience mid-engine, up-until-now-supercar performance for less than $100,000, and with a lot of options tacked on.

Reviewers have reported that they’ve had their hands on 3LT trim Corvettes with the Z51 Performance Package, totaling just under $89,000.