The Silverado is a line of Chevrolet trucks introduced in 1999 as a replacement for the Chevrolet C/K, which had a trim level called Silverado. Along with the similar GMC Sierra, it is available in full-size, chassis cab, and medium duty and has become a popular truck for workers, families, and every day drivers all over the United States.

Over the course of four generations, the Silverado has changed and adapted to all kinds of driving trends and the needs of a wide range of buyers. Since its introduction, it has sold over 12 million units and is one of the best-selling vehicles in the U.S. With continued innovation and stylistic changes, the Silverado is constantly evolving and adjusting to new automotive landscapes. 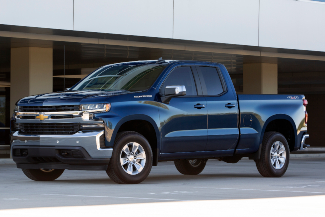 Chevrolet unveiled the fourth-generation Silverado 1500 Chevy truck in mid-December 2017. The redesigned model, which will be available in showrooms from the fall of 2018 (read the review here), features a more sculpted exterior that spots curvy edges, swoopy lines, and headlights that arc inward and integrate into the front grille.

The body and frame are made from a mixture of aluminum and steel that makes the fourth generation as much as 450 pounds lighter than previous-generation models. Fourth-generation models also feature a fresh interior with a centered rather than offset steering wheel.

Crew-cab models have been stretched to give rear passengers 3 inches more leg room, and internal storage has also been enhanced with 24-liter and 10-liter bins under the rear seats and in the rear seat backs respectively.

Buyers can choose from among eight trim levels including a High Country trim with 20-inch aluminum wheels.

In addition to the 5.3- and 6.2-liter V8 engines, Chevrolet added a turbo-diesel 3.0-liter, six-cylinder engine to the powertrain options of the new generation. The diesel engine, like the 6.2-liter V8 engine, is paired with a new 10-speed automatic transmission. With powertrains refined for real-world driving, the Chevy Silverado can tow up to 12,500 pounds.

For 2019 (read the review here), Chevy added an optional 2.7-liter turbocharged four-cylinder engine that makes 310 horsepower; it's paired with an eight-speed automatic transmission.

In 2020 (read the review here), Chevy made the 10-speed automatic transmission and the optional 6.2-liter V8 engine available on a wider range of Silverado trim levels (both features had previously been reserved only for higher-end trims).

In the 2021 (read the review here) model year, the Silverado received updates in tech such as the addition of Apple CarPlay, Android Auto, and standard Bluetooth smartphone connectivity. The 2.7-liter four-cylinder and 3.0-liter DURAMAX diesel options also got an increase in towing capacity and towing technology upgrades like a jack-knife alert and length indicator.

The 2021 1500 Silverado full-size pickup also got the newly introduced six-position tailgate as well as several new color options like Mosaic Black Metallic and Cherry Red Tintcoat. The Crew Cab Standard Box 1500 was also only made available in four-wheel-drive for this model year.

For 2022, (see the full review and video here) the Silverado got new exterior styling including an updated front fascia. Chevy also introduced a special edition off-road version of the Silverado 1500 called the ZR2. They dropped the 4.3-liter V6 from the options, leaving buyers with a choice between the 2.7-liter turbo producing 310 horsepower and 420 pound-feet of torque, 5.3-liter V8, 6.2-liter V8, and the DURAMAX 3.0-liter turbo-diesel, which produces 277 horsepower and 460 pound-feet of torque.

These engines all featured Chevy's 10-speed automatic transmission that was previously only available as an option. It also saw an update on the rear and front suspension dampers and newly tuned springs for better, more responsive handling.

One of the most comprehensive updates for 2022 was in the tech with the addition of a 13.4-inch touchscreen Infotainment system on all models except the W/T and Custom. These base-level trims have the same system as previous model years. This model year also marked the introduction of Chevy's Super Cruise semi-automated driving technology. 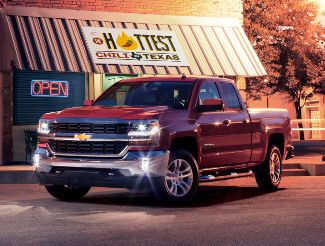 The new models featured a revised steering system that included electric assist for simplified tuning and refined suspensions that increased handling responsiveness. Third generation models also benefited from increased power output. The capacity of the base 4.3-liter V6 engine, for example, was increased from 195 to 285 horsepower.

In addition to the V6 engines, Chevrolet also gave buyers the option of a more powerful 420-hp, 6.2-liter V8 engine. All engines across the powertrain had new technology, including direct injection and cylinder deactivation, which increased fuel economy. Four-wheel drive was available across all generational models.

A six-speed transmission, which became the standard in the new models, replaced the four-speed unit in some of the previous models. These changes led to the Silverado winning North American Truck of the Year in 2014.

Chevrolet made just a few changes to the exterior and interior look of the third-generation model. New trucks had full-width bumpers and sculpted fenders, and the interior got plusher seating, Chevrolet's MyLink touch-screen interface, OnStar, and a new octagonal center stack.

The stacked headlight design was discontinued in a 2016 refresh, and the Silverado got a new front fascia and grille. For this generation, the body construction used more aluminum and high-strength steel to lower the trucks’ total weight. 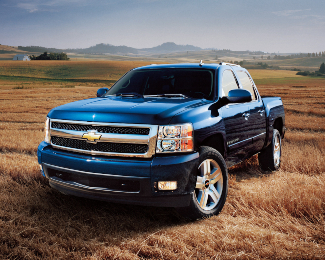 Chevrolet redesigned the second-generation Silverado 1500 to feature a new front frame design, rack-and-pinion steering, and improved fuel economy. Unlike the first generation, which was only available in three trim levels, the second generation had five trims, including the base WT trim and the higher-level LS version. The LS trim added full-power accessories, cruise control, and keyless entry. The crew cab had the option of an extra fuel economy trim.

All V8-powered trim levels got a new six-speed automatic transmission, FlexFuel technology, and electronic stability control. Buyers could choose between two- and four-wheel drive on almost all models. Some of the new safety features that came with the second generation included four-wheel anti-lock disk brakes, adjustable pedals and navigation, and side curtain airbags. 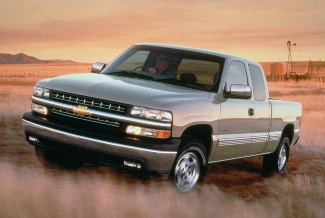 The Chevy Silverado 1500 was first released in 1998 as a 1999 model. The light-duty pickup truck was based on the GMT 800 platform—which General Motors used in suburban and other full-size SUVs—and was designed as a larger and more aerodynamic replacement for the C/K truck.

The first generation had a classic work truck body style that came in three cab styles: regular cab with two doors, extended cab with four doors, and crew cab with four front-hinged doors. Buyers could choose from among three cargo beds: a 69.2-inch short box that only came with the crew cab, a 78.7-inch standard box, and a 97.6-inch long box.

The power options available in the first generation were a 195-hp 4.3-liter V6, a 255-hp 4.8-liter V8 and a 270-hp 5.3-liter V8 engine. Chevrolet introduced several variants of the Silverado 1500 during its first generation, including a 2003 high-performance Silverado SS model that came with a 345-hp, 6.0-liter V8 engine and a heavy-duty series that ran between 2000 and 2007. The Silverado 1500 was the first pickup truck with an automatic transmission with a tow/haul mode.