Powertrain: A 173-horsepower, 2.4-liter four-cylinder engine with 166 lb-ft of torque, front-wheel-drive, and a four-speed automatic. 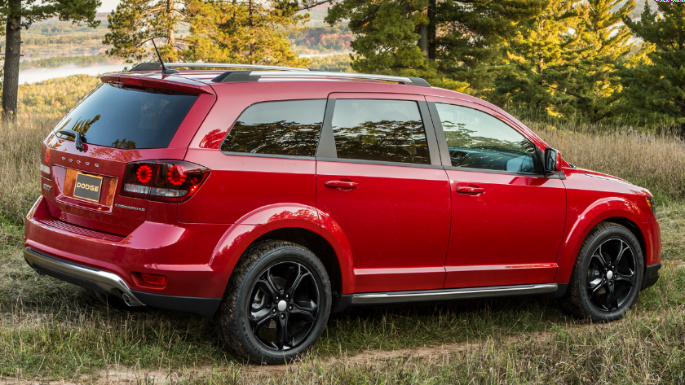 The 2020 Dodge Journey offers a lot of car for the money. It's one of the least expensive three-row SUVs on the market, with standard seating for up to seven passengers. Unlike many other three-rows out there, the Journey has relatively slim exterior dimensions, making it a sensible choice for those who don't always need the bulk of a larger vehicle. Its low price and passenger space mean the Journey fits between the big three-row SUVs and smaller models. But the Dodge Journey has been on the market since 2008, and it shows in numerous ways.

For 2020, the formerly optional V6 engine and all-wheel-drive have been discontinued, and the line has been cut to just two models. All models now get rear parking sensors, and the Crossroad model has a sunroof. Optional equipment packages have been altered, too. The Journey will be discontinued at the end of 2020.

The Journey is available in two trim levels, SE Value and Crossroad. 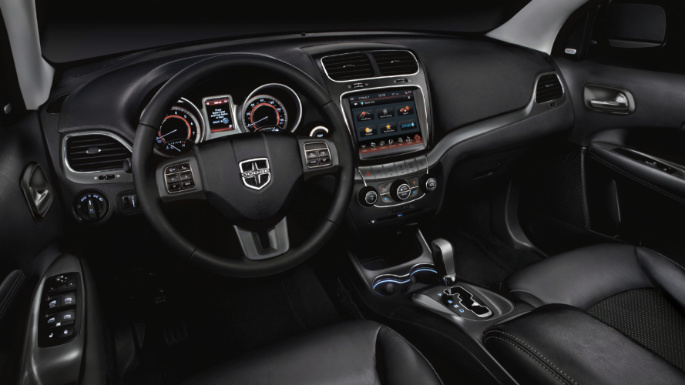 The Insurance Institute for Highway Safety (IIHS) rated the Journey Poor in the small overlap test for the driver's side and Poor for headlight performance. However, all other tests received a Good rating. The National Highway Transportation Safety Administration (NHTSA) gave the Dodge Journey four-stars overall out of five.

Rear parking sensors are now standard, but that's about the extent of the Journey's driver assistance technology. Automatic emergency braking, blind-spot monitoring, lane departure warning, adaptive cruise control, and even rear cross-traffic alert aren't offered. Between this and the Journey's subpar crash scores, it falls far behind modern SUVs for passive and active safety. The Journey does have a full complement of airbags. 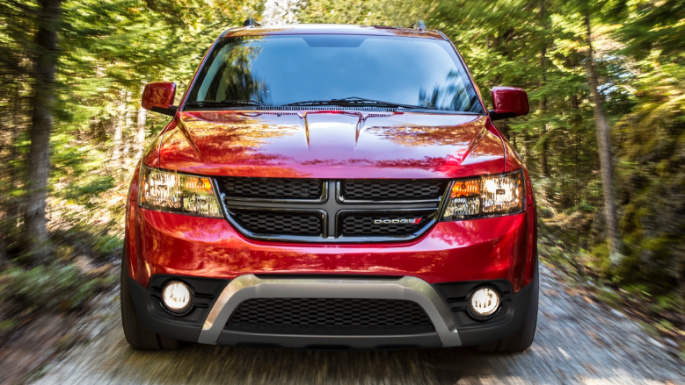 But it takes a big optional package on the SE Value to get Bluetooth, a power driver's seat, a satellite radio, and even a leather-wrapped steering wheel. Alloy wheels are optional. The Crossroad is a little better, as there's a reasonably priced package that includes heated front seats and steering wheel, upgraded audio system, and built-in navigation. Another package adds a rear entertainment system. But it pushes the price well into the territory of newer, better three-row SUVs.

Still, the Crossroad is likely the best route to go with the Journey. Some options, like alloy wheels and Bluetooth, impact the Value's value proposition. Skip the option packages, however. While they include heated seats and navigation, they push the Journey well into better vehicles' price range.

A Mitsubishi Outlander offers more equipment for less money, and the even less-expensive Volkswagen Tiguan provides many features not available on the Journey. Both of those offer all-wheel-drive. The GMC Acadia and Kia Sorento are more expensive to start, but they're larger and better vehicles altogether and likely worth the price. 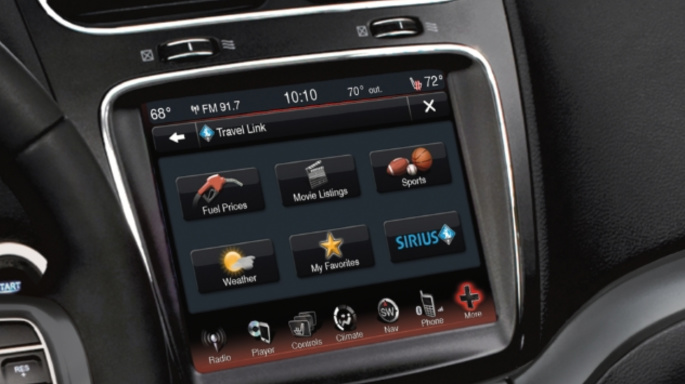 Like driver assistance technology, there isn't much in the way of tech in the Journey. Bluetooth is optional in the SE Value and standard on the Crossroad. The Crossroad also comes standard with the 8.4-inch touchscreen with Fiat Chrysler's UConnect infotainment system, widely regarded to be one of the easiest-to-use systems on the market. Built-in navigation is also an option there, and the 9-inch video screen for the rear entertainment system comes with wireless headphones and a 368-watt audio system. SE Value models make do with a cumbersome 4.3-inch touchscreen to control audio functions, and it looks like it's from the 2000s. At least the optional Bluetooth includes voice commands to control it.

While the Mitsubishi also doesn't offer much in the way of advanced technology, it does come with a touchscreen that includes Apple CarPlay and Android Auto compatibility, unavailable on the Dodge at any price. All of the Journey's rivals include smartphone connectivity, responsive infotainment systems, and Bluetooth as standard. 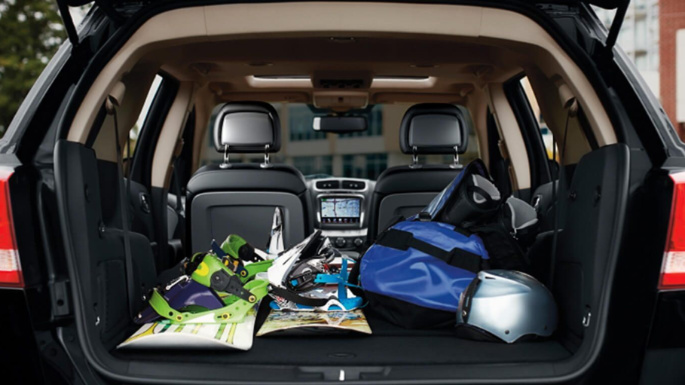 The Journey's big bonus for the price is its standard third-row seat. While it's not the most comfortable place for adults, kids will be comfortable on a trip. It's also easy for them to get back there because the second-row seat moves quickly with the pull of one lever. There isn't much cargo space behind the third-row, but the 50/50 split seat folds down easily, revealing a usable space, even if it isn't as large as some midsize SUVs. And the third-row seat is more comfortable than the ones found in the compact Outlander and Tiguan, which lack enough legroom for those above five feet. Even the Sorento's is no better than the Dodge, and the Acadia's is on the small side for midsize SUVs. It takes a step up to the larger three-row SUVs to get a third-row seat that's habitable for adults and only on short trips.

The second-row seats aren't bad, either. The wide, 60/40 split-folding seat also reclines, although it doesn't slide or fold in a 40/20/40 split like the Sorento. The Journey's boxy shape results in excellent headroom, and legroom is sufficient, too. One neat trick is the bins in the second-row floor that conceal small items from prying eyes. The base of the front passenger's seat also flips to show another small compartment.

For 2020, the Journey goes front-wheel-drive only, limiting its abilities in all-weather conditions compared to all but the four-cylinder Acadia. The maximum towing capacity is only 1,000 pounds. At least the total cargo capacity is a usable 67.6 cubic feet. There are even 11 cubic feet with the third-row up. That bests the Outlander and Tiguan, while the Sorento doesn't have much more space. The larger Acadia, however, has a maximum of 79 cubic feet. But the Journey still has a lot of usable space with a large opening behind the tailgate. It's not power-operated, however. 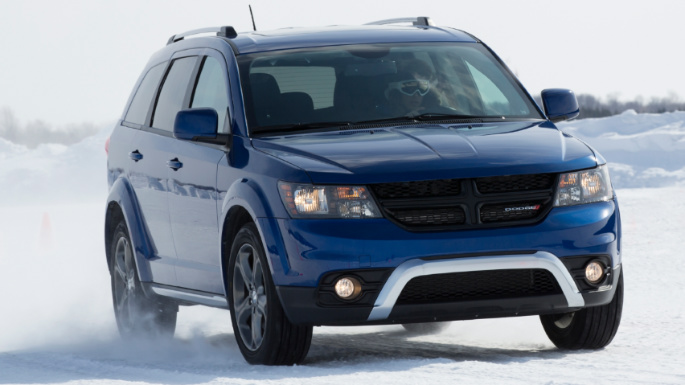 The Journey looks like it's from another decade because it is. There have been few changes since its introduction, and the shape is generally old-fashioned, if functional. The SE Value, however, looks low-rent with its standard plastic wheel covers, and alloy wheels are an option. Crossroad models jazz things up with a faux off-roader front bumper, gloss-black 19-inch alloy wheels, and slightly more brightwork. But that's the Journey's biggest problem.

Interior materials are another sore spot for the Dodge. An abundance of storage bins and the controls are easy to use, but that doesn't make up for all of the cheap-feeling plastic that consumes the cabin. Some surfaces that elbows might rest on are padded, but there are hard plastics for climate control knobs, on the shift lever, and seat adjustments. Some of them aren't very well put together, either. The Crossroad's large infotainment screen at least distracts the eye from the rest of the dashboard and adds some silver trim because the SE Value is particularly dreary with its small audio screen and all-black dash. Crossroad seat materials are a cloth/leather material that's an upgrade over the cloth upholstery on the SE Value. 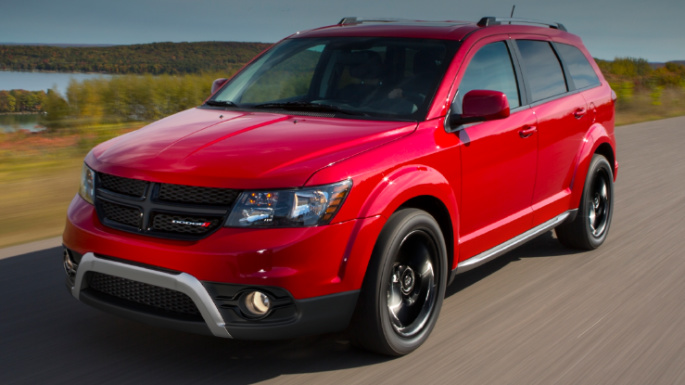 The loss of the V6 option for 2020 puts the Journey in a tough place because it also offered a six-speed automatic transmission. While the 2.4-liter four-cylinder has a somewhat competitive 173 horsepower to its rivals, the dated four-speed automatic transmission can't keep up with demanding acceleration. The engine also clarifies it doesn't like to be pushed, with loud noises emanating from the cabin. The drivetrain in the Journey is simply behind the times and doesn't seem well-suited to the vehicle.

The VW Tiguan has 11 more horsepower than the Dodge, but its small turbocharged engine and eight-speed automatic put the power down more efficiently. While more expensive, it's possible to get a V6 engine for all of the other rivals, and they offer the kind of power likely needed if carrying five or seven passengers is a regular thing.

Handling is another low for the Dodge Journey. Although it's admittedly an SUV and not intended for enthusiastic driving, soft suspension and its heft conspire to make it wallow over bumps and lean in the corners and make it feel larger than it is. In contrast, more modern SUVs have managed to quell some of those attributes.

At least driver visibility on the Journey is good, thanks to its upright design and large windows. Add in its relatively trim size, and it's easier to thread through traffic and park (also with its rear parking sensors and backup camera) than larger three-row SUVs. 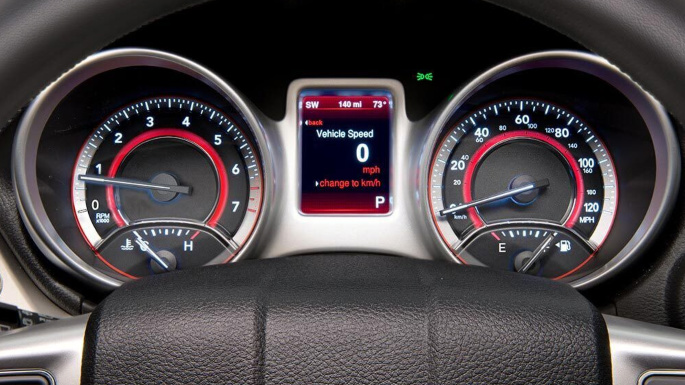 The 2020 Dodge Journey is rated by the Environmental Protection Agency at 19 mpg city, 25 highway, and 21 combined. By contrast, the four-cylinder GMC Acadia is rated at 23 mpg combined, the Kia Sorento and VW Tiguan at 25 mpg, the Mitsubishi Outlander at 27 mpg.

While none of these SUVs post particularly impressive fuel economy figures considering their four-cylinder and front-wheel-drive configurations, the Journey is still the worst. 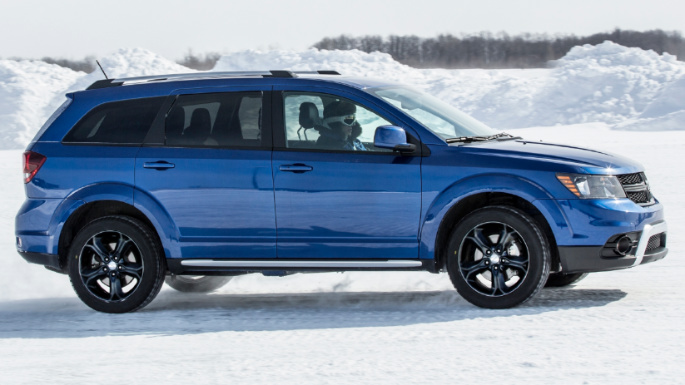