Vehicle Type: A midsize crossover with seating for up to five people.

Powertrain: The 2017 Edge is available with three powertrain options:

The standard unit is a turbocharged 2.0-liter four-cylinder that produces 245 horsepower and 275 pound-feet of torque.

A 2.7-liter EcoBoost turbo V6 is available for Sport models; it produces 315 horsepower and 350 pound-feet of torque.

All Edge models come with a six-speed automatic transmission and front-wheel drive.

All-wheel-drive is available as an option. 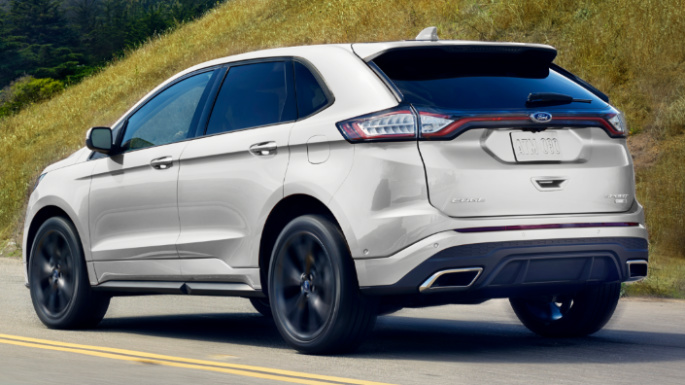 Ten years ago, the Edge made its debut in the Ford lineup as a two-row alternative to the larger Explorer and Flex SUVs. The crossover became a popular choice for buyers that need more space or amenities than a Ford Escape but don’t need the third-row seating option.

Updates for the model year are modest: A new set of 20-inch wheels and a new cold-weather package.

The Edge competes against the GMC Terrain, Volkswagen Touareg, and Nissan Murano.

Because of its size, the Ford could also compete with vehicles like the Honda CR-V and Toyota RAV4. 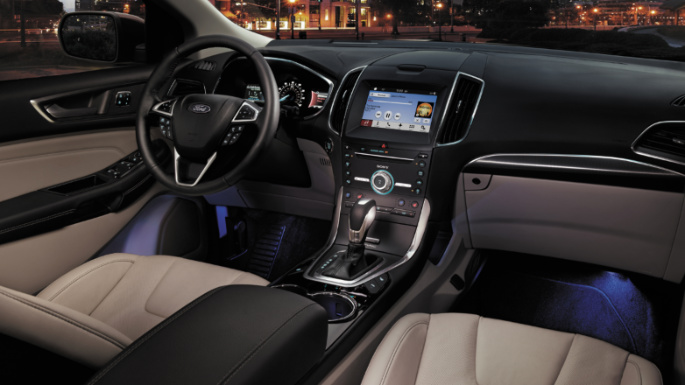 The Edge performed well in crash tests performed by the Insurance Institute for Highway Safety (IIHS). The agency scored the Edge ‘Acceptable’ for small overlap front driver-side crashworthiness, but ‘Good’ in all other crash-test areas. The Edge’s headlights were viewed as a weak spot and were rated ‘Poor.’ Front vehicle-to-vehicle crash prevention was rated ‘Basic’ with the optional safety equipment on board, and the child seat LATCH system ease of use was rated ‘Acceptable.’

Outside of a backup camera, Ford holds back on all of the advanced safety features that people want. Blind-spot monitors, rear cross-traffic alerts, adaptive cruise control, forward-collision warnings, and a 360-degree camera system are all reserved for added-cost options packages. Not even the range-topping Titanium trim comes with the advanced safety features that many drivers want. That’s a disappointment, especially when so many of the Edge’s competitors have opted to include their version of advanced driver assistance systems in at least the top trims of the various crossover models that are on the market today. 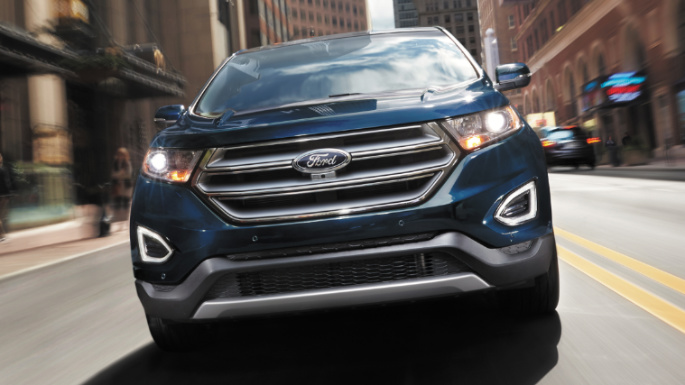 The Edge’s biggest weakness is its value proposition because it gets expensive quickly and does not come standard with desirable safety, comfort, and entertainment features. Its size puts it in competition with a wide variety of vehicles that are priced more competitively and that have more generous standard features. Everything from the Toyota RAV4 to the Acura MDX to the Jeep Cherokee to the Lexus RX have their sights set on the Ford Edge’s territory.

At the top end, the nearly $50,000 Edge sits eye-to-eye with offerings from Lexus, BMW, and others. That sounds like a disadvantage, but the Ford is equipped with clever driving, comfort, and entertainment features that set it apart. The Sport trim, priced just over $40,000 in some configurations, offers adaptive steering and all-wheel drive that make it feet truly sporty, and the powerful 2.7-liver EcoBoost doesn’t hurt, either.

Though it’s aimed at a specific buyer with just two rows of seating, the Edge courts its target market with an excellent interior, strong performance, and sharp styling. For the right buyer, the Ford Edge could be the perfect vehicle to haul a few people and a ton of gear. That said, the Ford’s price could alienate more buyers than the vehicle’s feature set attracts. There are several great crossover options that carry more equipment and better safety scores for a lower price. Some, such as offerings from Kia, Hyundai, and Mitsubishi, have far longer warranties to boot. 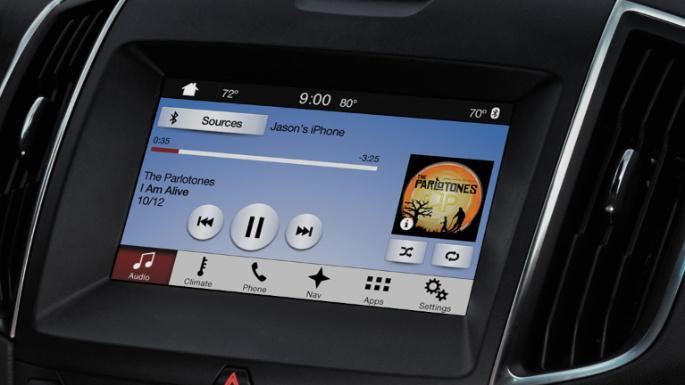 The brand-new SYNC 3 infotainment system is a giant leap forward from the previous MyFord Touch system, which was clunky, lagged frequently, and was not intuitive to use when the vehicle is in motion. The new software is colorful, operates smoothly with the touchscreen interface, and is better at taking voice commands than its predecessor. 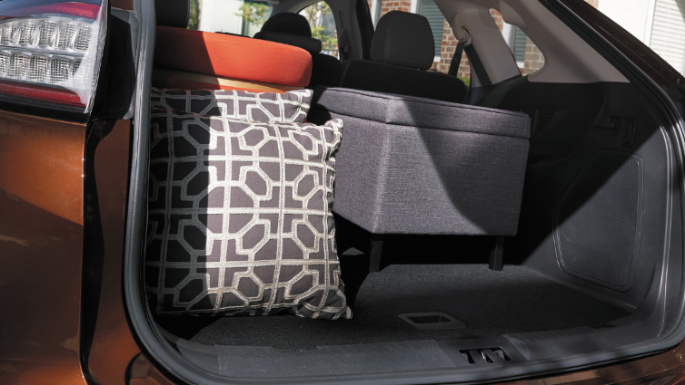 The Edge offers comfortable, spacious seating accommodations for four people, and can squeeze five without too much of a pinch. The front seats are, by far, the best spots in the vehicle, and in higher trims, the addition of leather upholstery and seat heating makes them that much better at carrying people.

Small-item storage space is generous. Ford added several cleverly placed storage areas throughout the Edge’s cabin, which makes the vehicle ideal for parents of small children and for people with a variety of gear to carry around on a daily basis. There’s a large covered bin on the dash, large door storage pockets, center console space for days, and a space in front of the shifter area that is ideal for storing smartphones.

The Edge manages 39.2 cubic feet of cargo space with the rear seats up and 73.4 cubic feet with them folded down. The vehicle’s sloped roof and curvy shape do cut into space in terms of carrying large or wid 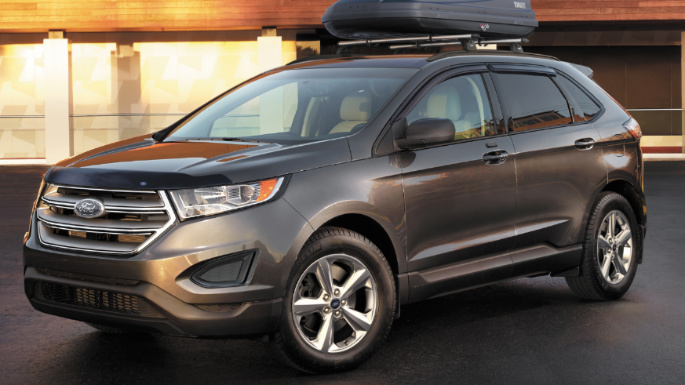 The 2015 redesign brought sharper lines to the Edge’s profile, but its design is clean, modern, and imposing. The grille is prominent but proportionate and flows neatly into the lines of the hood and beltline. Black plastic, of which there is a noticeable amount, is tastefully applied and fits within the overall aesthetic of the vehicle.

Inside, the Edge feels minimalist at first glance. The center stack is, by far, the busiest part of the cabin, where Ford replaced many of the buttons and controls it removed from the previous generation vehicle. Even so, the layout is relatively intuitive and is easy to use.

Higher trims get clever interior tech that allows the gauge cluster to be configurable. This gives the driver the ability to choose what is displayed by the speedometer and tachometer and can change the dash’s appearance significantly in some settings.

Though it’s not the worst, outward visibility could be better in the Edge. The vehicle’s high beltline, small rear window, and large D-pillar (the rear-most pillar) combine to create imposing blind spots and can hamper the driver’s ability to confidently navigate tight spaces, such as parking garages or urban streets. 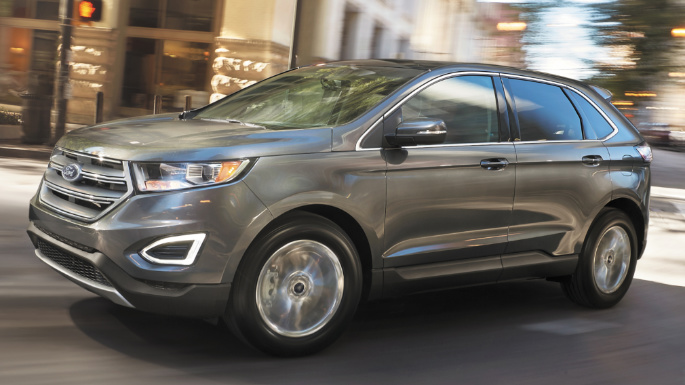 The Edge can feel like three completely different vehicles, depending on which engine is equipped. The base four-cylinder mill is plenty powerful for in-town runs and can propel the Edge to highway speeds with no issues. The 3.5-liter V6 lacks turbocharging but has better high-end power than the base engine, which makes it better for passing and accelerating at speed. The 2.7-liter EcoBoost V6 is full of personality and makes the crossover feel sportier than expected.

The six-speed automatic transmission lacks a few gears compared to gearboxes in some of the Edge’s competition, but it’s a solid performer. Shifts are quick, and the unit willingly downshifts to provide better performance and acceleration.

Edge Titanium and Sport models come equipped with adaptive steering, which changes the level of resistance in the wheel, depending on the vehicle’s speed. That’s helpful for maneuvering through parking lots and tight spots and helps make the vehicle feel more planted and predictable at highway speeds. Braking is similarly confident, though the pedal can feel a bit sensitive at first.

New suspension technology, combined with the Edge’s excellent chassis tuning, yield a car-like ride that remains comfortable in all but the worst conditions. Compared to other crossovers, the Edge feels downright cushy at times.

Most Edge models offer a comfortable and compliant ride, but the Sport model’s stiffer suspension setup makes it less than ideal over broken pavement and potholes. It’s the least comfortable Edge model by a sizable margin but is still quite comfortable by crossover standards. 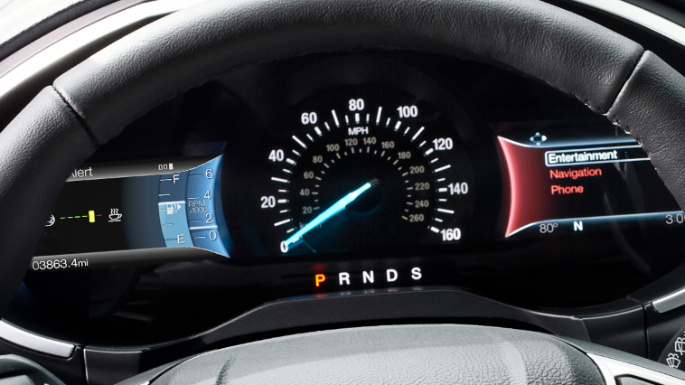 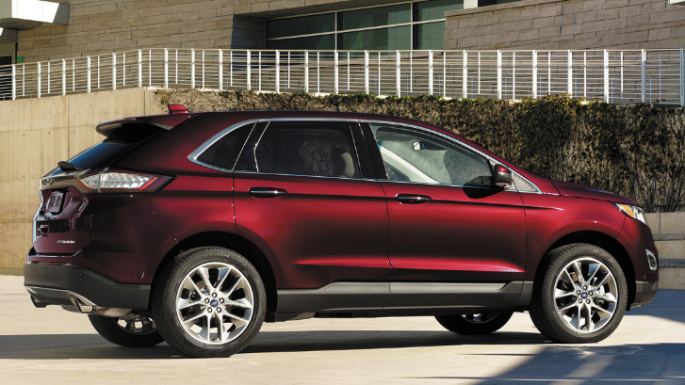 The Ford Edge Titanium has a starting price of $36,495 and comes with a rear spoiler, a power liftgate, dual-zone climate controls, leather upholstery, heated front seats, memory seats, and a power-adjustable driver’s seat and passenger’s seat.

The Ford Edge Sport has a starting price of $41,295 and comes with a 2.7-liter V6 engine, premium synthetic leather upholstery, and AWD.

Several desirable features are held back in added-cost options that can be selected either individually or as part of a package. Safety tech, such as blind-spot monitors, lane keep assist, lane departure warnings, and rear cross-traffic alerts are all available, as are comfort and convenience features such as a panoramic moonroof, a navigation system, and a premium audio system.

If it were our money on the line for a new Ford Edge today, we’d opt for the SEL trim and would add driver assistance tech to the mix. The mid-range trim can be upgraded with the extra features and does not come with the premium-level price tag that the Titanium trim carries. At the top level, the Edge’s price lands too close to what is seen from Lincoln, Lexus, and others, and the Ford just doesn’t deliver the level of luxury, refinement, and desirability to justify the extra dollar amount.