The Ford Edge proves that trends run in cycles. Launched in the early 2000s, the original Edge was one of the first midsize crossover SUVs, sporting car-like styling that sharply contrasted the more traditional-looking Ford Explorer of the time. However, new-car buyers realized they liked the roominess of three-row SUVs like the Explorer more, and interest in the two-row Edge waned.

Yet while market dynamics have changed, the Edge hasn’t. The current second-generation Edge dates back to the 2015 model year, and even a substantial update undertaken for the 2019 model year is quickly receding in the rearview mirror. The Edge now sits between the much newer Explorer and Ford Escape in the automaker's SUV-heavy lineup.

Aside from some new tech features, the 2021 Ford Edge doesn’t get many significant changes, so we can evaluate it based on our experience with previous model years. As with the 2020 model year, trim levels include SE, SEL, ST-Line, Titanium, and ST. 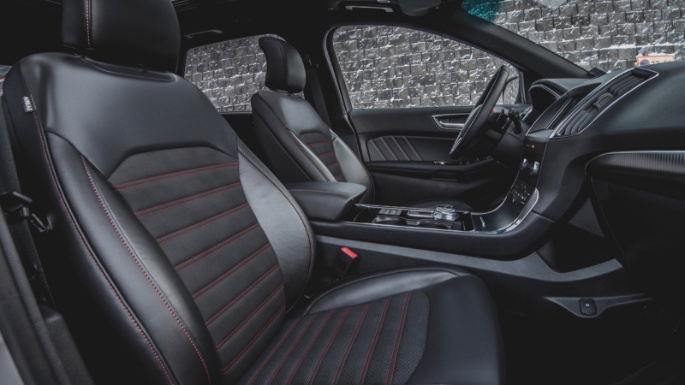 Styling hasn’t changed much since the 2019 model year, when Ford gave the Edge a refresh to bring its exterior in line with more recent designs. That refresh worked surprisingly well, nicely integrating the current Ford look with the carryover Edge body shell. Today, the Edge is a cleaner-looking alternative to the overwrought styling of the Chevy Blazer or Hyundai Santa Fe.

Edge Titanium models get an extra splash for chrome to denote their higher-level status, while the Edge ST trim gets a blacked-out grille, standard 20-inch wheels, and a body kit. Ford also offers the Edge ST-Line, with the same exterior styling features as the ST, but without that model’s performance upgrades and higher price tag.

The interior is where the Edge is starting to show its age. The design doesn’t seem as fresh as the exterior, and it’s been awkwardly tweaked over the years to accommodate new features, like a larger touchscreen. Titanium models get leather upholstery, while ST models get sporty front seats with added bolstering and a leather-wrapped steering wheel, both with contrast stitching. 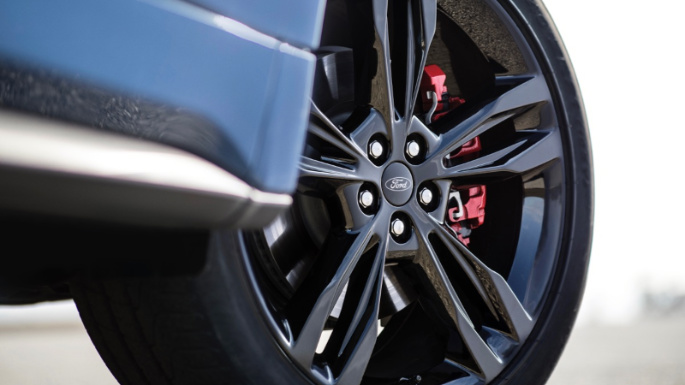 Most Edge models use a 2.0-liter turbocharged EcoBoost four-cylinder engine, which produces 250 horsepower and 275 pound-feet of torque. This engine is available with only an eight-speed automatic transmission, with standard front-wheel drive (FWD) or optional all-wheel drive (AWD).

The Edge ST raised a few eyebrows when it arrived for the 2019 model year. Some car enthusiasts weren’t happy to see the ST badge—previously applied to the Focus ST and Fiesta ST hot hatchbacks—on the liftgate of an SUV. Yet Ford claims the Edge ST isn’t a cynical marketing exercise, saying its engineers benchmarked performance SUVs like the Porsche Macan during development.

Based on previous drives of the ST, we think the Porsche comparison is a bit of a stretch, but this sporty Edge isn’t a bad car to drive, especially considering that none of its competitors emphasize performance. We’ve also found the Edge to be impressively refined for a vehicle based on an aging platform, although past experience showed the turbo-four engine in non-ST models to be a bit sluggish.

Ford quotes maximum towing capacities of 3,958 pounds for the base FWD four-cylinder Edge, 4,122 pounds for four-cylinder AWD models, and 4,525 pounds for the V6-powered Edge ST. Those are respectable numbers, but the Honda Passport and Volkswagen Atlas Cross Sport are both rated to tow 5,000 pounds when equipped with AWD and, in the VW’s case, the optional VR6 engine. 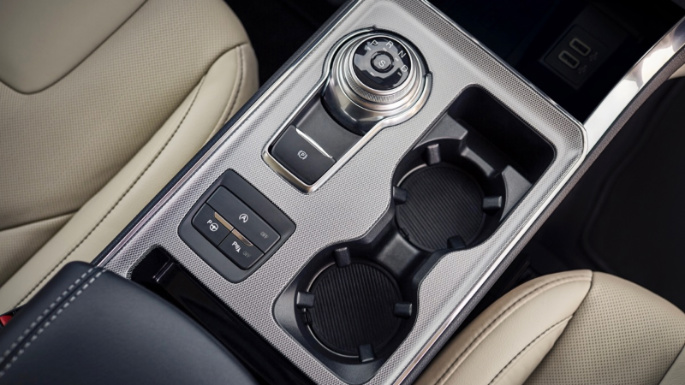 The five-seat Edge remains competitive on interior space, boasting the most rear-seat headroom among the current crop of two-row midsize crossovers. Legroom in both the first and second rows is behind only the Hyundai Santa Fe. Dual-zone automatic climate control is standard as well.

Ford’s ubiquitous rotary shift knob was designed to free up space on the center console, but the narrow width of the console itself means the available space is still only about average. The raised console does leave room for a storage nook below, but it can be difficult to reach, and its out-of-the-way location means items place there will probably be forgotten easily. 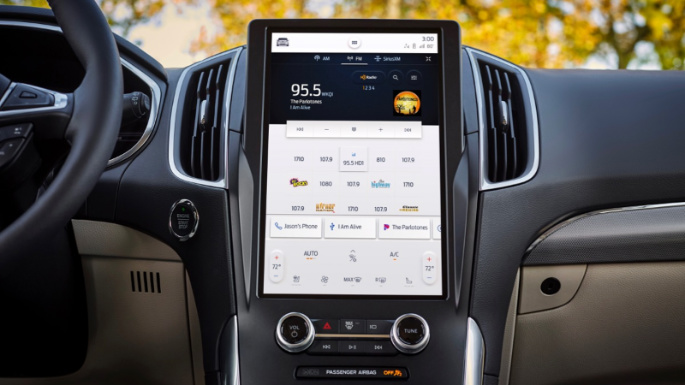 Ford has kept the Edge up to date on tech. For 2021, the crossover gets Ford’s latest Sync 4 infotainment system, with standard wireless Apple CarPlay/Android Auto and a 12-inch touchscreen. Bluetooth, SiriusXM with 360L satellite radio (with a three-month free trial), and a built-in 4G LTE WiFi hotspot are standard as well. Edge ST models also get a 12-speaker Bang & Olufsen audio system.

While the driver doesn’t need to plug in for Apple CarPlay and Android Auto connectivity, the Edge features four USB ports. Two rear USB ports, including one USB-C, were added for the 2021 model year.

We haven’t driven a Sync 4-equipped Edge, but our experiences with Sync 4 in other recent Ford models were positive overall. The simple graphics and straightforward menu layouts should be easy for new users to acclimate to. It’s also worth noting that not all competitors offer wireless Apple CarPlay and Android Auto. 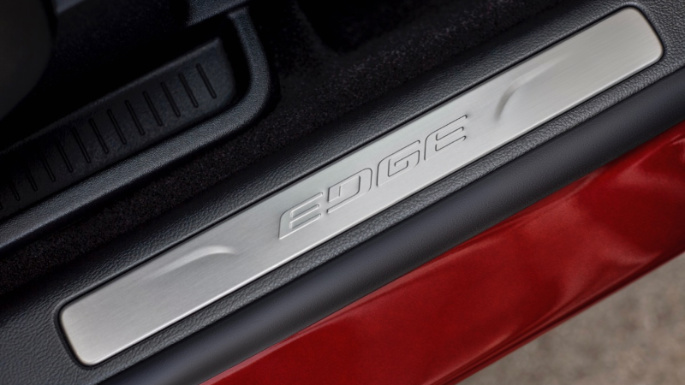 The 2021 Ford Edge is an Insurance Institute for Highway Safety (IIHS) “Top Safety Pick.” It scored the top “Good” rating in all IIHS crash tests, and the top “Superior” rating for front crash prevention tech in vehicle-to-vehicle situations. However, the Edge got a lower “Advanced” rating for vehicle-to-pedestrian front crash prevention tech, an “Acceptable” rating for LATCH child-seat anchor ease of use, and “Acceptable” and “Poor” headlight ratings (depending on trim level).

In addition, adaptive cruise control (with stop-and-go and lane centering) is standard on all but the base Edge SE trim level, along with Evasive Steering Assist. This automatically adds more power assist when swerving to avoid obstacles. 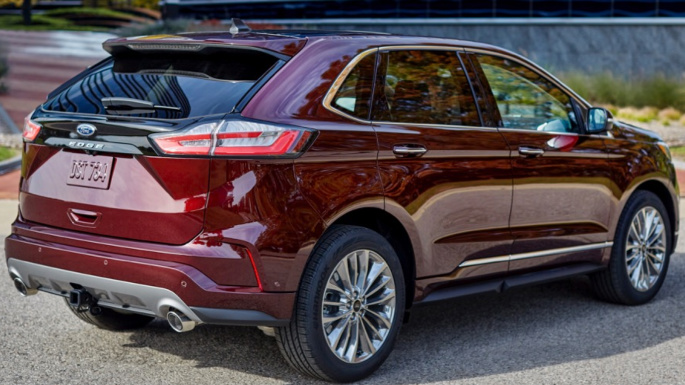 While the Edge is starting to show its age in some places, it remains a competitive midsize crossover SUV. Ford has kept pace with tech developments, and the Edge keeps up with newer rivals on interior space. So while it may not be the newest vehicle in its competitive set, the Edge is still worth a look.