This same engine is tuned for 400-horsepower on some higher trims of the Expedition. 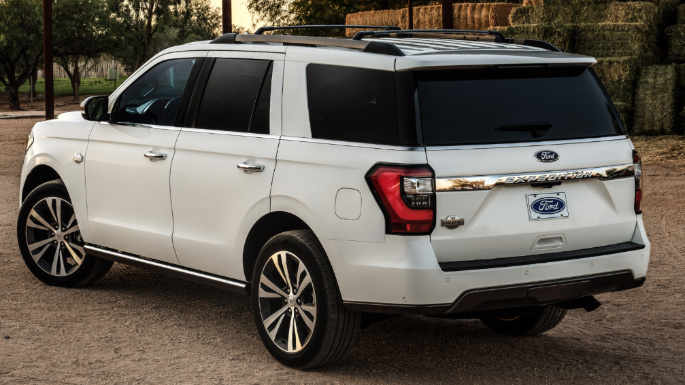 The 2020 Ford Expedition is another entry in the full-size SUV segment.

Rivals for the Expedition are the Chevrolet Tahoe, Chevrolet Suburban, GMC Yukon and Yukon XL, Nissan Armada, and Toyota Sequoia. Higher-end versions of the Expedition can also be compared to the Cadillac Escalade, Infiniti QX80, Lexus LX 570, Toyota Land Cruiser, and the related Lincoln Navigator.

Last redesigned for 2018, the Ford Expedition adds a King Ranch trim level just below the top-level Platinum model. It adds 22-inch wheels, upgraded leather upholstery, and some exterior trim revisions. All models now get the Ford Co-Pilot 360 suite of driver assistance technology features, which include automatic emergency braking with pedestrian detection and forward collision warning, blind-spot monitoring, automatic high beam assist, and lane-keep assist, among other features. A wireless smartphone charging pad is now standard on Limited and higher trims and optional on the XLT. Platinum models get additional leather trim on the dashboard and door panels.

The 2020 Expedition is available in four trim levels, all of which can be had in standard length or extended Max formats. 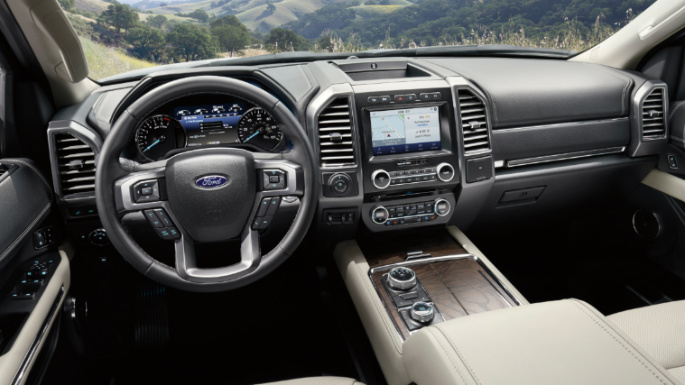 The National Highway Traffic Safety Administration (NHTSA) awarded the 2020 Expedition its highest five-star rating in overall crash protection. The Insurance Institute for Highway Safety (IIHS) has not yet tested the current-generation Expedition.

Optional on Limited models, and standard on the King Ranch and Platinum, the Co-Pilot 360 Assist package adds adaptive cruise control with stop-and-go assist. While the Lexus and Toyota models include many of these features as standard, most versions of the GM SUVs make them options, and sometimes only on higher-end models. 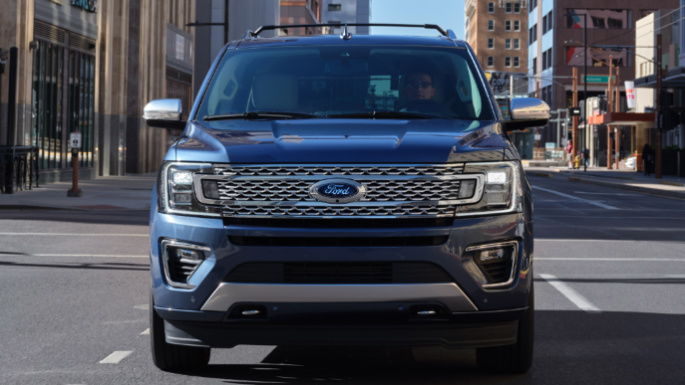 The base Expedition XLT starts at an already-hefty $55,000 before options. At least it’s well-equipped from the start, with standard 18-inch alloy wheels, 8-passenger seating, power driver’s seat, power-folding third-row seat, and the expected infotainment system and smartphone connectivity, as well as the raft of driver assistance technology.

It’s easy to option up an XLT with expensive packages and four-wheel-drive, however, putting it close to the entry price of the better-equipped Limited model, which adds leather upholstery, parking sensors, built-in navigation, and a power liftgate. And while the Expedition is more expensive than the corresponding Nissan Armada or Toyota Sequoia models, it’s less expensive than the Chevrolet and GMC rivals.

But the Expedition makes more sense in XLT and Limited models. When fully optioned, an Expedition Platinum exceeds $86,000, which is largely what a well-equipped Lincoln Navigator costs. The Lincoln has more power than the Expedition, as well as a much nicer interior and finishes more in line with the price tag. That price also secures a Toyota Land Cruiser, which is better off-road, and a Land Rover Range Rover or Lexus LX 570 isn’t much more expensive. 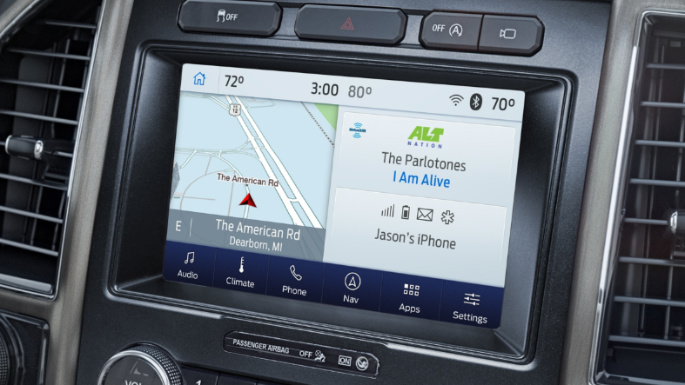 All Expedition models get an 8-inch touchscreen infotainment system using Ford’s Sync 3 system. A wi-fi hotspot is also included for over-the-air updates. Built-in navigation is optional on the XLT and standard on other models, and it also includes voice activation and SiriusXM Travel Link. Four USB ports are standard, although most versions are available with another package that adds two more USB charge ports for third-row passengers. A 110-volt, household-style outlet is also standard on Limited and higher trims, and optional on the XLT, as is a wireless smartphone charger.

While the Sync 3 system is relatively straightforward to use and is supplemented by numerous physical knobs and buttons that are large and well-marked, the infotainment system has some confusing menu layouts, and the system is awash in somewhat muted colors that make it harder to differentiate icons at a glance. The Chevrolet and GMC use clearer systems with brighter colors that make the icons more discernible. At least the Ford’s processor is reasonably quick and can keep up with the demands of systems such as Apple CarPlay and Android Auto. 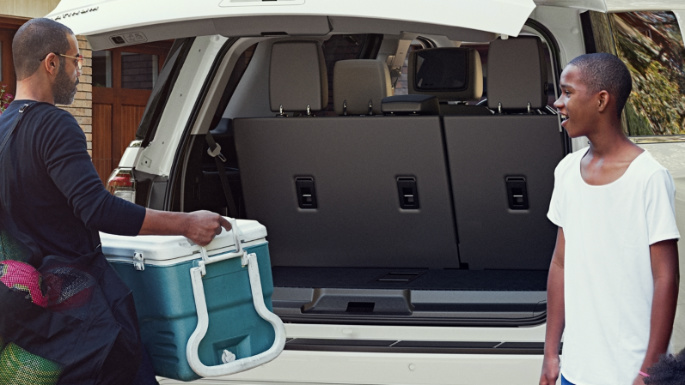 The Expedition’s seats also fold flat into the floor, unlike the Chevrolet, Cadillac, and GMC models that have an elevated load floor that robs overall interior space, or the Toyota Land Cruiser that has third-row seats that fold up against the sides of the interior, also stealing some overall space. The Lexus LX 570 offers a third-row seat as an option, limiting the standard seating capacity to five. Legroom is also better in the Expedition than most of its rivals.

With the heavy-duty trailer package, the Expedition can tow a maximum of 9,300 pounds, slightly more than the Cadillac Escalade and Lincoln Navigator. That towing capacity drops to 9,000 pounds on the longer Max models. 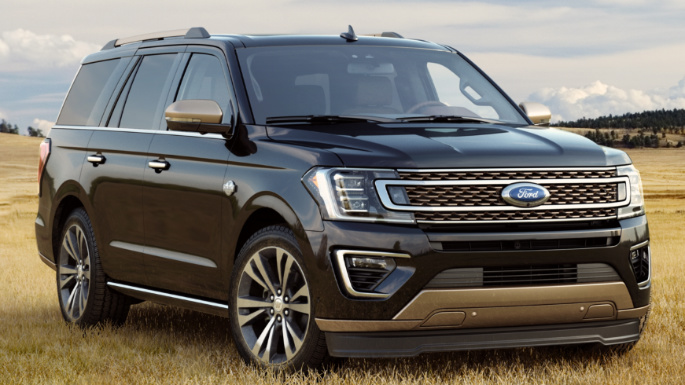 Last updated for 2018, the Expedition looks like an evolution of the design it’s used for several years, even though it was vastly changed under the skin. That’s not necessarily a bad thing for traditional full-size SUV buyers, and the various trim levels and appearance packages change up the Expedition’s exterior styling enough for some personalization.

XLT models come standard with 18-inch wheels that seem to drown amid the Expedition’s vast body panels, but most other versions come with 20 or 22-inch wheels.

As you might expect, even the standard-length Expedition is cavernous inside. The wide interior may be imposing for some shorter drivers who have to reach across the equally wide center console, but most controls are within easy reach. All models have running boards as standard equipment, while they deploy electrically on Limited and higher trim levels. There are no fewer than 15 beverage holders, too. Longer Max models are extremely spacious inside with generous room for cargo behind the third-row seat. 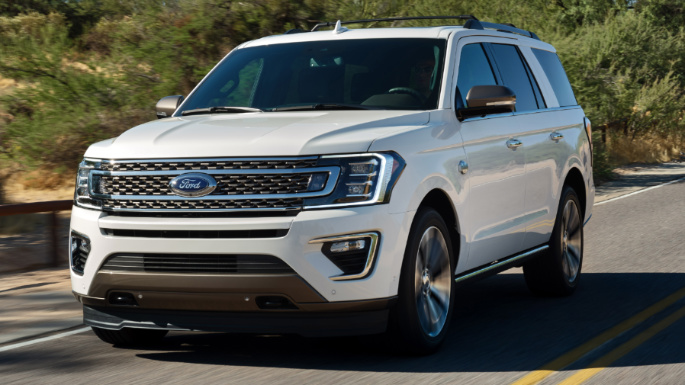 A 3.5-liter twin-turbo “Ecoboost” V6 engine is the only option on the Expedition, always paired with a 10-speed automatic transmission. Most models get a 375-horsepower version of the engine, while the Platinum trim gets 400 horsepower.

No Expedition is particularly wanting for power, however, as there’s an abundance of torque available right off the line. The transmission does its best to keep the power on tap, but it’s no smoother than the eight-speed automatics found on numerous rivals. Some drivers, however, might miss the sound of the V8s offered on rivals, however, and some of those vehicles don’t have a fuel economy penalty over the Expedition’s V6.

There’s no hiding the Expedition is a large vehicle, and even though the Ford shed some weight in its redesign, it hardly feels agile. That’s especially the case with the longer Max models, which are the longest vehicles Ford makes now. At least the Expedition’s independent rear suspension makes for a more composed ride, and slightly sharper handling than the Chevrolet Tahoe and GMC Yukon can offer, even if it doesn’t have the refinement of a similarly sized luxury SUV. 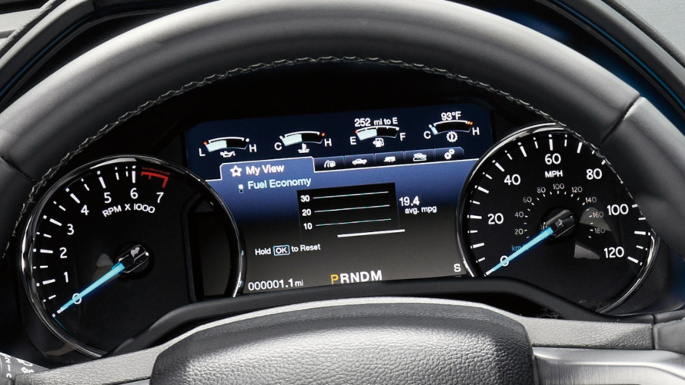 With its V6 engine, the Expedition is slightly more efficient in EPA tests than the marginally less powerful Chevrolet Tahoe and GMC Yukon with the base 5.3-liter V8 engines. The Toyota Sequoia and Nissan Armada can only muster 15 mpg combined, while the Toyota Land Cruiser fares worse at 14 combined. The Cadillac Escalade has roughly the same fuel economy as the Expedition, however, and has more horsepower from its larger V8 engine. 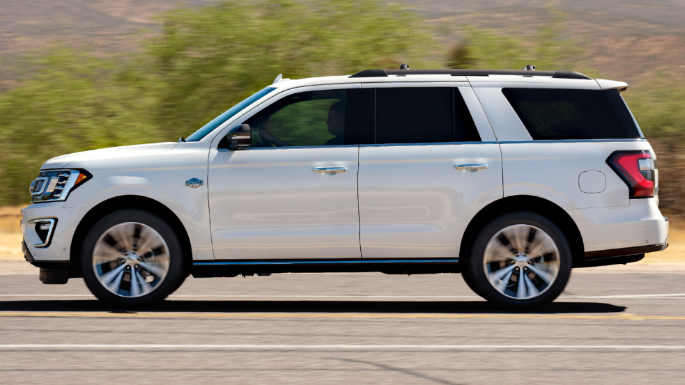 The 2020 Ford Expedition XLT starts from $54,505 MSRP including $1,695 for destination charge, and rises to $78,660 for a Platinum Max model. There are four trim levels for the 2020 Expedition, all of which are available in regular-length or extended Max body styles, as well as available with four-wheel-drive.

Package 301A adds a panoramic moonroof and adaptive cruise control, while Package 302A also includes 22-inch wheels, surround-view camera, LED headlamps and fog lights, and an automated parking assist system. Package 303A adds all of these features as well as the Stealth Edition package, with 22-inch wheels and gloss black exterior trim and red interior stitching accents.