The Ford Explorer was introduced in 1990 and quickly became a fixture on American roads. This SUV helped popularize the SUV in general, and it inspired numerous competitors, most of which would go on to replace passenger cars as the family vehicles of choice.

Over the years, the Explorer has evolved significantly, from a truck-based two-or-four-door to a three-row SUV and even a car-based hybrid. 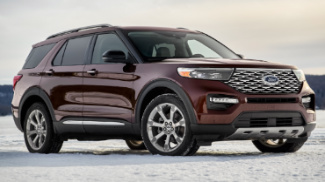 After one generation on a front-wheel-drive platform, the 2020 Ford Explorer ushered in standard rear-wheel-drive again. But it wasn’t a truck, as it remained car-based, and three rows of seats were standard. Its styling even resembled the outgoing model, even if it was slightly longer and slightly lower.

Base models received a 2.3-liter turbo-four with 300 horsepower, while a 3.5-liter turbo V6 made 365 horsepower. The Explorer ST performance model made 400 horsepower with the same 3.5-liter engine. But the most interesting model was the new Explorer Hybrid, with a 3.3-liter V6 and electric motor that made 318 horsepower.

New features included a wifi hotspot and vertically-oriented touchscreen with Ford’s Sync 3 infotainment system. Other elements like automatic emergency braking, blind-spot monitoring, and lane-keep assist were made standard on all models. 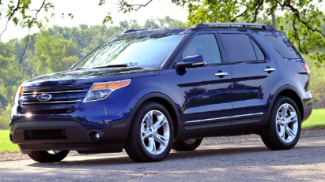 The Explorer returned with a completely new design. Loosely based on the Taurus sedan, the fifth-generation Explorer was car-based and front-wheel-drive for the first time, although an all-wheel-drive system remained available.

The design was significantly sleeker than before, although it grew longer and wider. Six or seven seats were available.

A 3.5-liter V6 with 290 horsepower was the initial engine, but a 2.0-liter turbocharged engine with 240 horsepower soon became available, another first for the Explorer.

The upgraded Explorer Sport introduced a 3.5-liter turbocharged V6 with 365 horsepower and standard all-wheel-drive, along with blacked-out trim and large wheels.

For 2016, the Explorer gained a more powerful 2.3-liter turbocharged four and a new Platinum variant with a turbo V6. 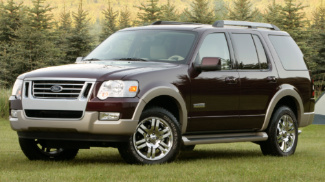 Inside, the interior was altered with revised trim and new options such as navigation and Ford’s SYNC connectivity system. Power running boards were another new feature, along with power-folding rear seats and side curtain airbags, which were eventually made standard.

The 4.0-liter V6 and five-speed automatic returned, but a new 4.6-liter V8 with 292 horsepower and a six-speed automatic was introduced. This would be the last Explorer with an optional V8. 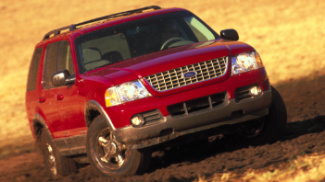 The third-generation was a complete redesign for 2002 and marked a significant change from the preceding models. The body grew significantly, with a taller and longer shape and tougher appearance. This was to accommodate a wider track and new independent rear suspension to make a third-row seat optional for the first time.

The Explorer Sport returned, based on the previous model, and only through 2003.

V6 and V8 engines returned, along with rear or four-wheel-drive and a permanent all-wheel-drive system. A five-speed manual was briefly offered, but most versions received a five-speed automatic.

Along with an updated interior, the revised suspension not only allowed for an optional third-row seat to increase capacity to seven passengers but significantly added to overall cargo space. 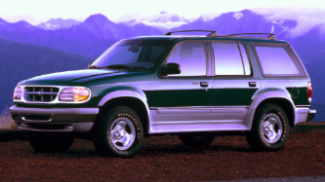 The Explorer was revised for 1995. It was still based on the previous model but had notably rounder styling that was again similar to the company’s car lines.

The 4.0-liter V6 returned but now featured either 160 horsepower or 210 horsepower, depending on the version. It also used a new five-speed automatic. Another addition was a 5.0-liter V8 engine with 205 horsepower and an all-wheel-drive system.

A two-door Sport model continued, as did four-door models in XL, XLT, Eddie Bauer, and Limited variants. All models gained dual airbags for the first time, along with a new dashboard and new seats. Later in its run, side airbags were made available, as well as a load-leveling rear suspension and rear parking sensors. 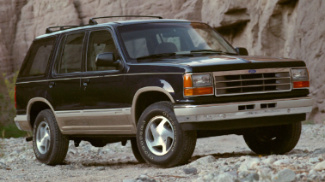 The Explorer debuted in 1990 for 1991, replacing the two-door Bronco II. It offered a car-like interior over a pickup truck platform. While it was closely related to the Ranger pickup truck, the Explorer had different exterior styling that was more reminiscent of one of Ford’s cars, and it was significantly larger than the old Bronco II.

Available as the two-door Explorer Sport or the four-door model, each model received a 4.0-liter, 155 horsepower V6 engine and either a five-speed manual or four-speed automatic. Rear-wheel-drive was standard, but push-button four-wheel-drive was an option.

Initial models were a base XL model, the XLT with more chrome and equipment, and an Eddie Bauer model with two-tone paint. Later, a Limited trim would arrive with features such as automatic headlights, auto-dimming mirror, and a trip computer.