Powertrain: All Ford Raptors are powered by a twin-turbo 3.5-liter six-cylinder engine which makes 450 horsepower and 510 lb-ft of torque.

Power is routed to all four wheels via a 10-speed automatic transmission and standard all-wheel drive.

Ford released an all-new Raptor for the 2021 model year, no major changes were made for 2022. A V8-powered Ford Raptor R is rumored to be on the way sometime in 2022. 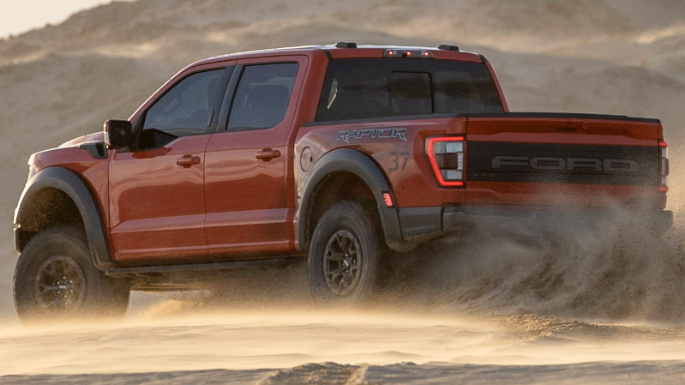 The Ford F-150 Raptor pioneered the category of Baja ready trucks straight from the factory. It is designed to be an ultra-capable vehicle for high-speed off-roading, without the need for modification or upgrading. The impressive specs include FOX 3.1 off-road shocks with position-sensing dampers and remote reservoirs. Other high-performance off-road features include optional bead-lock capable wheels, underbody skid plates, BF Goodrich all-terrain tires, and a re-engineered front frame to better absorb the blows of off-road driving.

The Raptor is aimed at buyers who want one of the most capable off-road trucks on the market, whether or not they plan to use those capabilities or not. Plenty of Raptors will never see so much as a dirt road, but that does not mean the truck can not handle real off-road conditions. Ford was smart enough to give the Raptor plenty of styling upgrades as well. Drivers of a Raptor are unlikely to be confused with someone in just a regular F-150.

The segment has become more crowded recently with the introduction of the Ram TRX, another no-holds-barred off-road truck, which is equipped with a 700-plus horsepower supercharged V8. Buyers in this segment may also consider the Jeep Rubicon 392, Toyota Tundra TRD Pro, or Chevrolet Silverado Trail Boss. The only true competition for the Raptor is the TRX. The upcoming Bronco Raptor and rumored Ranger Raptor may attract some buyers who traditionally would have gravitated to the F-150 Raptor. 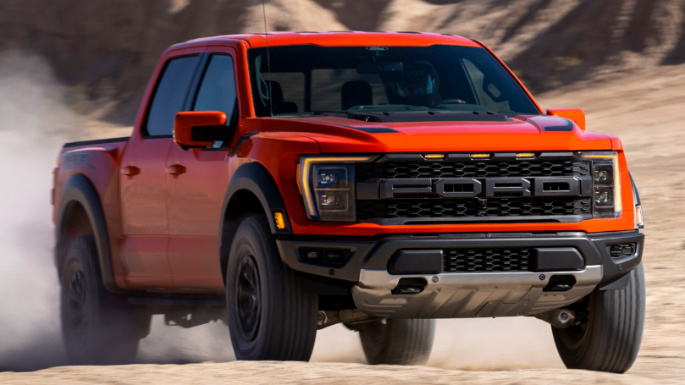 The twin-turbocharged 3.5-liter EcoBoost V6 delivers plenty of power, running to 60 miles per hour in just over five seconds, and through the quarter-mile in under 14. For high-speed off-roading, the Raptor has the oomph to get airborne or shred the sand dunes. That said, it is not nearly as silly-fast as the TRX which rockets to 60 in under four seconds, thanks to its 702-horsepower supercharged V8.

Brakes, steering geometry, and suspension have been dialed in with this extreme off-roading in mind. The Raptor soaks up large bumps and even small jumps without becoming unsettled.

Yet for all its supposed off-road prowess, we were particularly impressed with how well-mannered and comfortable the 2022 Raptor is on the road.

A five-link coil-spring rear suspension replaces rear leaf springs from the previous generation and delivers a better off- and on-road ride.

The interior is as comfortable for five passengers as pretty much any full-sized SUV. Head, hip, and legroom are plenty for most adults regardless of where they are seated. The off-road suspension also delivers a supple ride when driving on the pavement.

The upright windshield and large windows give the Raptor excellent visibility. The high hood and beltline do compromise visibility close to the truck, so be extra careful looking out for children or small objects near the truck.

The Raptors exhaust note is improved in the newest iteration. Sure it doesn't quite have the character of a growly V8, but it's been smartly tuned by the gearheads at Ford to give off a hearty, athletic sound. Ford carefully designed the new 3-inch exhaust system, including a trombone loop, to create a more enjoyable soundtrack. It sounds more like a twin-turbo V6 sports car than a burly off-road truck. 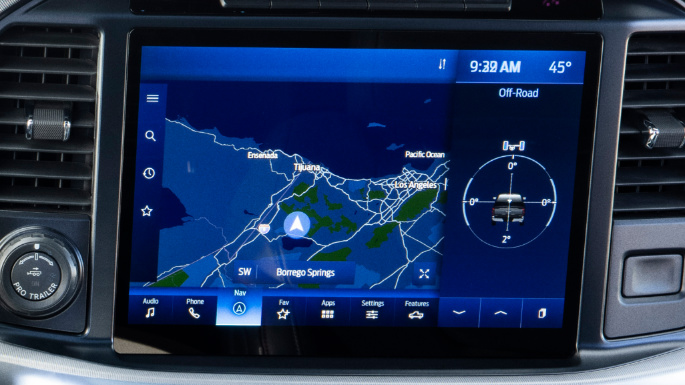 The Raptor includes a massive 12.0-inch touchscreen to run the infotainment system. Ford's Sync 4 user interface is well regarded for its intuitiveness and ease of use.

The Raptor makes good use of physical buttons as well, with key features controlled by knobs. Steering wheel-mounted buttons and voice controls also make it easy to control the system. 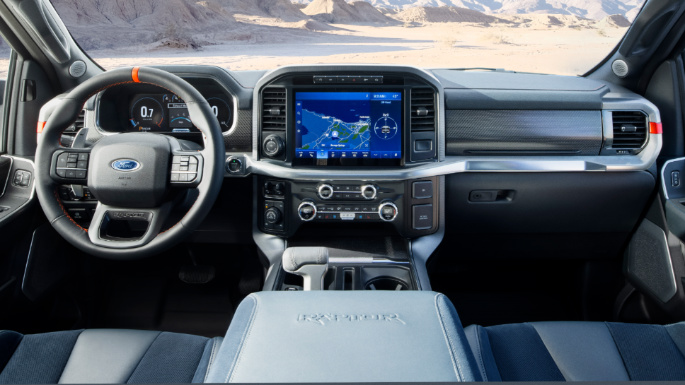 The Ford F-150 on which the Raptor is based received a Top Safety Pick designation from the Insurance Institute for Highway Safety (IIHS).

The Raptor offers more standard safety tech than its main competition, the TRX. 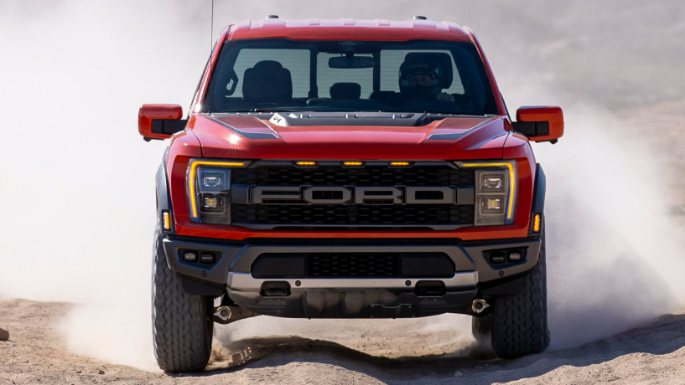 It is difficult to call a nearly $70,000 truck a value, but the Raptor delivers more off-road and on-road usability and features than the Jeep Gladiator (MSRP $76,395)or Toyota Tundra TRD Pro ($68,500) for less money. The TRX has a livelier engine and comparable off-road capability, but costs a minimum of $78,675.

The Raptor delivers more for your money than anything in the ultra-offroader category and has a nicer interior, more safety features, better on-road ride, and better gas mileage.

Even when maxing out the options list, the Raptor slightly undercuts the competition feature for feature.

Our only gripe is that a moonroof or sunroof isn't standard; for this kind of money and with all of the other features Ford packed into the truck, a sunroof should be gratis.

The Raptor uses a high-output version of a proven F-150 drivetrain, so it is not unreasonable to expect a reliable drivetrain. Tires and other wear parts are likely going to be more expensive than a normal truck, so be prepared for a higher cost of regular maintenance. 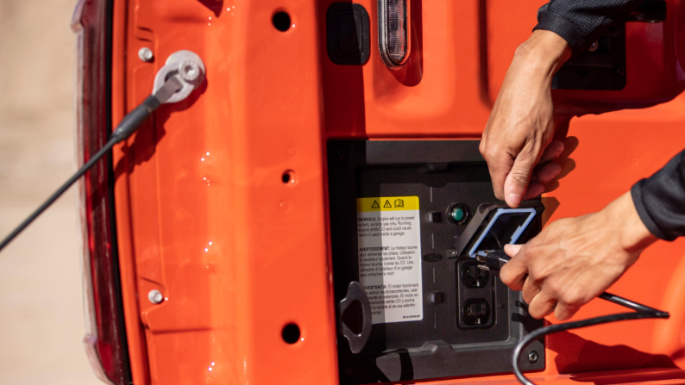 The F-150 Raptor moves 5 adults and their gear around in relative comfort, on- or off-road.

For a normal full-size truck, the Raptor loses some capability due to its softer suspension and heavier off-road equipment. There is still plenty of hauling power for most needs with a towing capacity of 8200 pounds and a payload rating of up to 1400 pounds.

The Ram 1500 TRX can tow up to 8,100 pounds and has a payload capacity of 1310 pounds. The Raptor bests the more powerful Dodge in both categories.

When factoring in the weight of fuel and five adult passengers, the payload rating doesn't leave a lot of room for heavier gear, like loaded down coolers or an ATV in the bed.

The maximum towing and payload of the normal F-150 can be as high as 12,700 pounds and 3,250 pounds respectively when properly equipped.

The lone bed and cab configuration means a comfortable interior but limits the Raptor to a 5.5-footbed. An available onboard 5.2-kW generator adds practicality back into the smaller bed, with the ability to plug-in tools and a TV for tailgate parties. 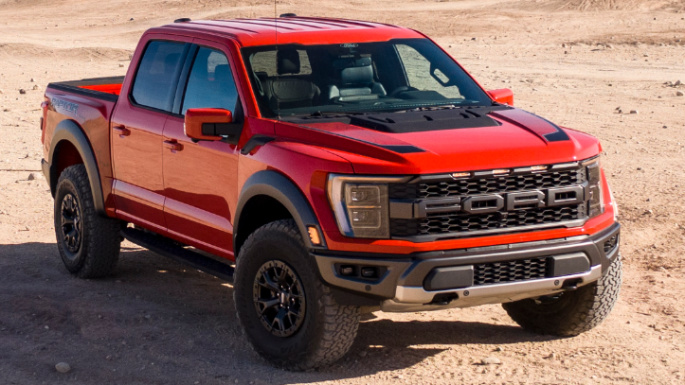 The exterior of the F-150 Raptor distinguishes it from the regular F-150. The hood, grille, fenders, wheels and tires, tailgate applique, and exterior lighting let you know this is a hardcore off-road vehicle. The current Raptor is only available in SuperCrew configuration with four full-sized doors.

Inside, the interior is largely similar to that of the F-150, and that is a good thing. Changes include a unique steering wheel with a red stripe at the top center. Also different than the normal F-150 are the seats. Recaro-designed front seats hold driver and passenger firmly in place for more extreme maneuvers but are comfortable even for long trips.

The quality of the F-150's interior is class-leading in both material choice and ergonomics. Everything is pleasant to the touch and where it should be. The Raptors upscale interior is near-luxury in every way.

Overall, the Raptor delivers on the promise of being both a luxury truck and a Baja-ready off-roader. The TRX is similar, but more gimmicky and overstated in every way. The Raptor is more serious in its attitude than any of the competition. 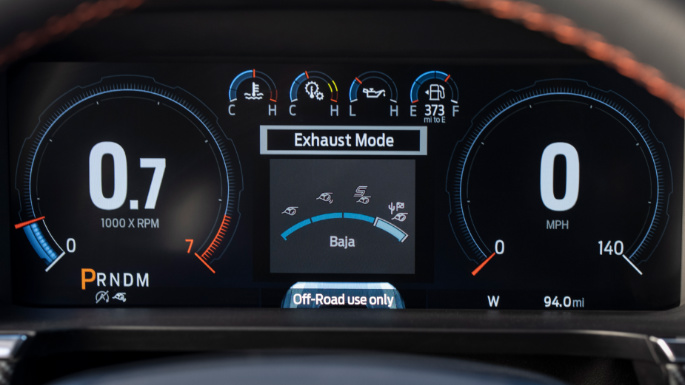 With 35-inch tires, the EPA estimated the Raptor should return 15 MPG in the city and up to 18 on the highway. Upgrading to the 37-inch tire package drops fuel economy to 14 MPG city and 16 highway. This is by no means good but does compare favorably to other off-road-oriented trucks.

The Ram TRX gets EPA estimated fuel economy of 10 MPG city and 14 on the highway. Some reviews have indicated real-world mileage in the single digits.

The best-rated full-sized four-wheel-drive truck for fuel efficiency is the Ram 1500 equipped with a 3.0-liter Diesel V6 at 29 MPG highway and 21 city.

Though most buyers in this segment are not concerned with fuel economy, the Raptor edges the competition slightly but is no match for the fuel economy of hybrid and diesel full-sized trucks. 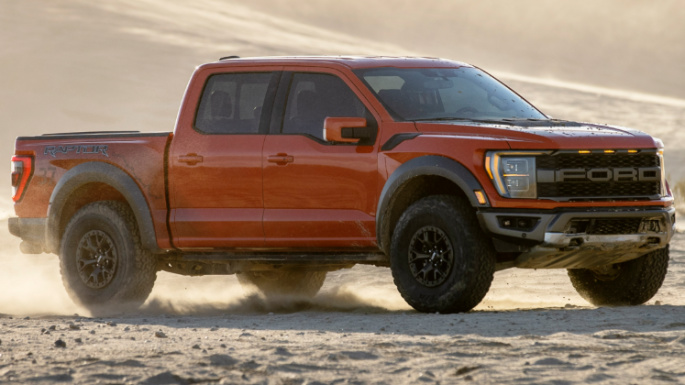 There is only one trim level for the Ford F-150 Raptor, which starts at $67,070 including destination charges. For that price, you get a twin-turbocharged 3.5 Liter V6 with 450 horsepower, a unique off-road-oriented suspension with FOX shocks, 35-inch all-terrain tires, 17-inch wheels, and underbody skid plates. Trail Control off-road cruise control, all-wheel-drive, and selectable drive modes are also included.

Inside the Raptor includes all-weather floor mats, a 12-inch touchscreen, leather seating surfaces, heated and ventilated Recaro-designed front seats, and upfitter switches for adding your own power accessories. A trailer hitch is standard equipment, as are Ford Co-Pilot 360 safety features.

A Carbon Fiber Interior package adds racy bits to the interior for $995 or a Blue Interior Package adds blue accents to the upholstery, shift knob, dash, and doors for $2,395.

Adding more luxury to the Raptor might mean checking the box for the Moonroof and Tailgate package, which includes a twin-panel moonroof and power tailgate with a built-in step and work surface.

If it were our money, we would spec the Raptor with the High package largely to get the better stereo. We would keep the standard tires, and avoid the moonroof.