The Fusion is Ford's midsize family sedan that's currently in its second generation. It's one of the few models in its class to offer optional all-wheel-drive and a lineup of turbocharged EcoBoost engines were introduced well ahead of many rivals' turbo engines. It competes against models like the Toyota Camry, Honda Accord, Nissan Altima, Chevy Malibu and Volkswagen Passat. 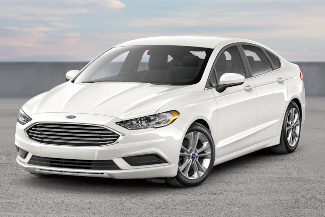 Completely redesigned in 2013 on Ford’s CD4 platform, Fusion had an entirely new appearance that won praise for its refined, stylish and upscale look.

An automated parallel-parking system and adaptive cruise control were now offered as options in addition to forward-collision warning and an automated braking system. Ford also added other new options including a lane-departure warning system with lane-keeping assistance and automatic high beams as well as an improved infotainment system and USB ports for music.

Fusion models could still be had with either front- or all-wheel drive, but the latter was only available with the turbocharged 2.0-liter engine. Also, a manual transmission was only offered on the base-model Fusion SE. MacPherson struts replaced the previous double wishbone suspension in front, with multi-link suspension in the rear.

Ford made relatively minor changes to the 2014 Fusion. The turbocharged engine changed from 1.6-liters to a 1.5-liter 4-cylinder. The Hybrid got a new base-level S model, and three new options were added to all trims. These include inflatable seat belts, heated rear seats and ventilated front seats.

In 2015 there were only two changes: the backup camera became a standard feature, and the manual transmission was eliminated from the lineup.

For the 2017 model year, Ford gave the Fusion a mild facelift and added a new turbocharged 325-hp 2.7-liter V6 engine. Ford also enhanced the adaptive cruise control system, improved the parking-assistance system and the pre-collision braking system to be sensitive enough to detect pedestrians. A rotary-style automatic transmission shifter was added. A Platinum trim level was added at the top of the lineup, and it featured distinctive wheels and upgrades to the Fusion’s interior space.

2019 models also received a minor facelift. Active safety features that had been optional on some models were made standard on all Fusions. SE and higher trims received the 1.5-liter EcoBoost turbo engine as standard equipment. The short-lived Platinum trim was dropped, making the Titanium the highest trim. 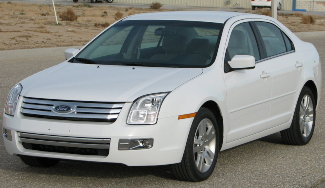 The first Fusion was built on Ford’s CD3 platform and offered with two engine choices. A 160-horsepower, 2.3-liter 4-cylinder came with either a five-speed manual or automatic transmission. An optional 220-horsepower, 3.0-liter V6 was paired with a six-speed automatic.

The first Fusion models were all front-wheel drive. Anti-lock brakes were optional, and so were side-curtain airbags and traction control. There were three trim levels. The basic S had air conditioning, a CD player and cruise control in addition to keyless entry and some power accessories. The midlevel SE model had all of that plus a power driver's seat, audio controls on the steering wheel and a better audio system. Options included such things as leather seats, a sunroof and a 6-disc CD changer. The higher-end SEL model had larger alloy wheels and automatic climate control, with options like heated seats and auto-dimming mirrors as well as automatic headlights.

In 2007 Ford added front-side and side-curtain airbags as a standard feature on all models of the Fusion. Also added at this time were new options including a built-in navigation system and Sirius satellite radio capability, aux jacks, and an anti-theft perimeter alarm.

V6 models had the additional option of all-wheel drive. The 6-disc CD changer became standard on the SE model in 2007. Also, SE and SEL models had a new front passenger fold-flat seat as standard equipment.

A Sport package made its debut, adding upgrades like 18-inch alloy wheels and an improved suspension as well as interior and exterior trim differences.

2010 brought the first-generation Fusion's most significant update. The interior and exterior design got a complete makeover that gave the model a more refined look.

This was also the year Fusion Sport came out, with a 263-hp 3.5-liter V6 engine, darkened front grille, 18-inch allow wheels and rear spoiler. Some new safety options became standard as well, including a backup camera and a blind-spot monitoring system as well as a rear cross-traffic alert system.

In 2011 Ford added the MyKey system and introduced a manual-shift mode for the automatic transmission, in addition to HD Radio and rain-sensing windshield wipers.