Vehicle Type: The Ford Mustang Mach-E is an electric crossover with seating for five people.

Price Range: The Ford Mustang Mach-e ranges in price from $43,995 to $66,000, which includes destination, but is before options or taxes.

Powertrain: The Ford Mustang Mach-E is offered with both rear- and all-wheel drive and with a standard- or extended-range lithium-ion battery pack.

The Mach-E Select with rear-wheel drive has an EPA-estimated range of 230 miles, which changes to 211 miles with all-wheel drive.

The Mach-E First Edition is offered only with an extended-range battery and AWD for a total of 270 miles.

The Mach-E California Route 1 comes with rear-wheel drive and an extended-range battery for 305 miles of range.

The GT and GT Performance Edition both get an extended-range battery and all-wheel drive. 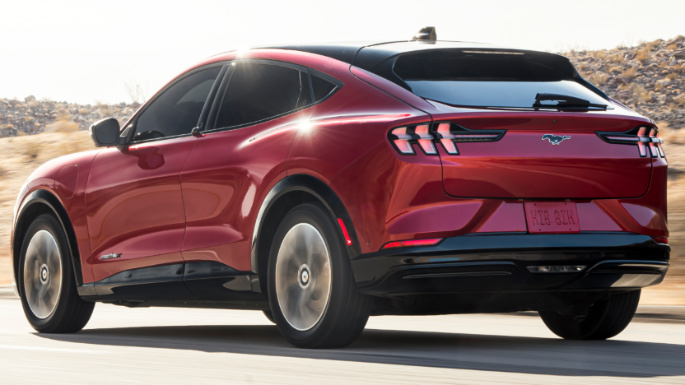 A Ford Mustang by any other name would still be a Ford Mustang, or at least that’s what the automaker’s marketing team and engineers are hoping. The Mustang Mach-E is the first fully next-generation electric crossover from Ford, and though it wears the pony car-inspired name, the excitement it delivers is much more about efficiency and technology than it is about big power and performance - though there is some of that here, too.

The Mach-E is all-new for 2021 and competes with vehicles such as the Volkswagen ID.4, Kia Niro EV, and Hyundai Kona Electric. The vehicle is targeted at new-car buyers that want an efficient and usable electric crossover with the backing of a major legacy automaker. Even in its most expensive form, the Mach-E undercuts performance EVs from automakers such as Porsche by tens of thousands of dollars, which may help it attract EV hopefuls from the premium space.

Ford made waves with the Mustang Mach-E because of its name. Some felt that naming an electric SUV after the muscle car tarnished the Mustang family name, but most who have driven the Mach-E feel that its performance and technology help it live up to its namesake in more ways than one. 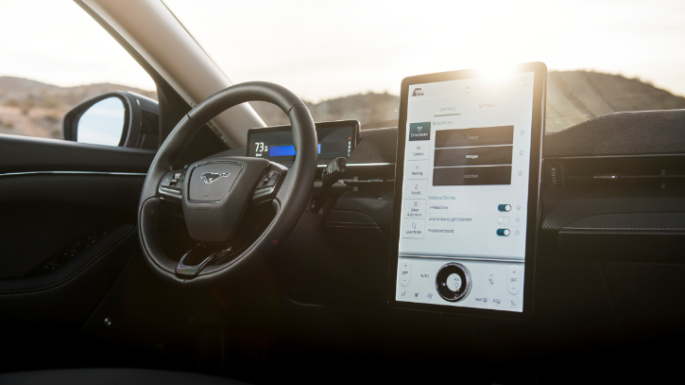 The Ford Mustang Mach-E earned a 2021 Top Safety Pick award from the Insurance Institute for Highway Safety, which includes Good ratings in all crashworthiness categories, a Good or Marginal rating for headlights, and Superior scores in both front crash prevention categories. The National Highway Traffic Safety Administration (NHTSA) has not yet rated the Mach-E. 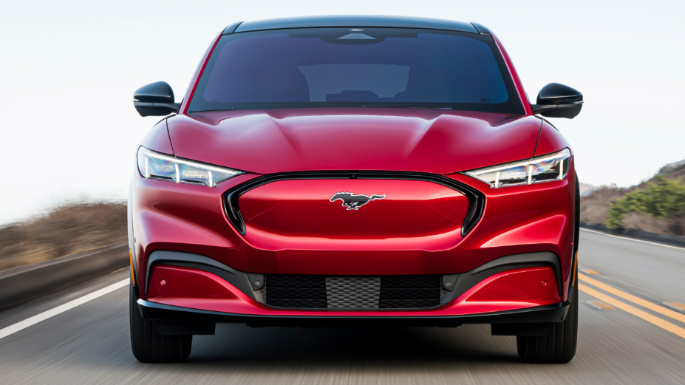 The Mach-E can become expensive, but it doesn’t have to be. The value proposition is strongest with the base Select trim, with rear-wheel drive. The entry-level trim gets most of the best tech goodies and offers a decent range without the big price penalty that higher trims bring. There may also be tax credits or incentives available, both at a federal and state level.

The mid-range Premium trim sports a 300-plus-mile range and more of the features that buyers want. It’s also not outrageously priced, though it will crest $50,000 with options. Those numbers are still more approachable than the Tesla Model Y and represent a good deal of value.

Buyers wanting performance as a priority over range can opt for the Mach-E GT, which starts at over $60,000. It’s the quickest, but far from the most efficient, of the Mach-E group. 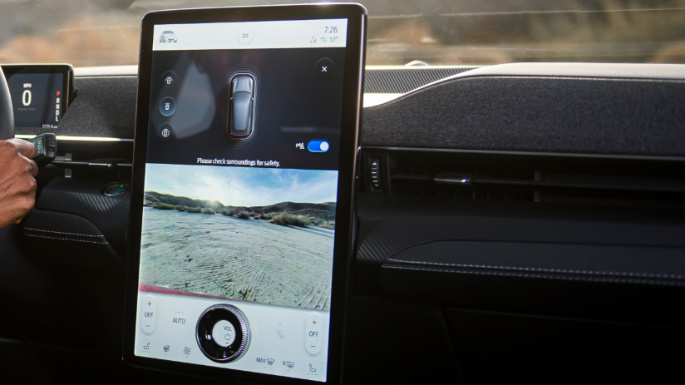 We can blame Tesla for pushing other automakers into the big-screen infotainment game, but it’s hard to deny that massive displays aren’t cool, even if a bit distracting. The 15.5-inch touchscreen in the Mustang Mach-E dominates the cabin, and in its vertically-oriented position atop the dash, can be seen from any seat in the house. It runs SYNC 4 infotainment software, which can take advantage of the screen real estate by running two apps at once. There are also over-the-air OTA updates, which allow Ford to add new features and update existing functionality over time.

Standard features include navigation, steering wheel-mounted controls, wireless device charging, selectable driving modes such as Unbridled and others, a rotary gear selector, and a 10.2-inch digital gauge display. The Mach-E's navigation system can deliver directions to the closest charging stations, further helping avoid range anxiety and the likelihood of not finding a charger on time.

Available features include a hands-free liftgate, a B&O sound system with ten speakers, and a 360-degree camera system. 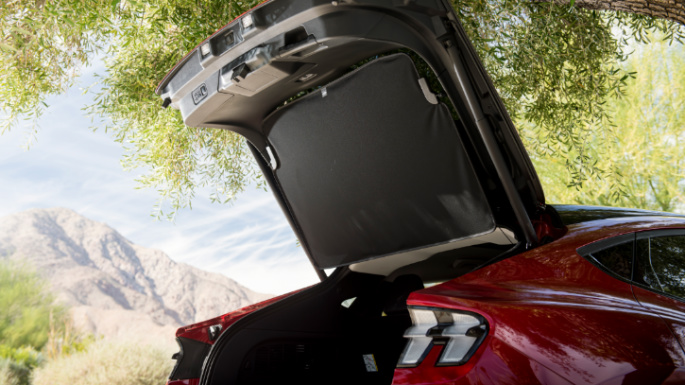 Despite its sporty name, the Mach-E is a crossover at heart. That means a large, open cargo space, which measures 29 cubic feet with the rear seats up and 60 cubic feet when they are folded down. Adding to that, the Mach-E features plentiful small-item storage and a large center console storage space.

Interior space is generous for passengers in both rows of seating. This makes it practical to carry at least four, and sometimes five, adults for longer distances comfortably.

Thanks to its EV design, the Mach-E has a front trunk, or frunk, that offers an additional weather-tight storage space outside of the cabin. It’s a little difficult to access the space since it has to be popped open like a traditional hood, but the extra storage is worth the hassle. 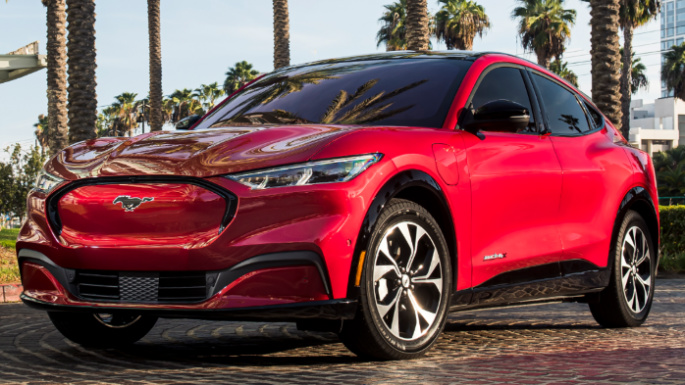 Ford could’ve gone any number of directions with the Mach-E’s styling and design, but the automaker opted to walk the line between futuristic and retro styling, which it has done with great success in nearly every other recent Mustang model. The Mach-E’s "coupe"-like external lines are curvy and give it a smooth overall shape, but strong lines and sharp angles bring an aggressive look.

The Mach-E’s cabin is tech-forward but still feels enough like a normal car that any driver can feel comfortable. The large touchscreen display offers excellent views of vehicle status and controls, and the inclusion of a small digital gauge display in front of the driver is a big benefit over some EV designs, which rely entirely on the touchscreen.

Ford positioned the Mach-E’s battery pack under the passenger compartment, which allows it to open up the cabin for an airy and spacious feel. The rear seats are roomy and offer great head and legroom, while the entire vehicle provides excellent outward visibility. 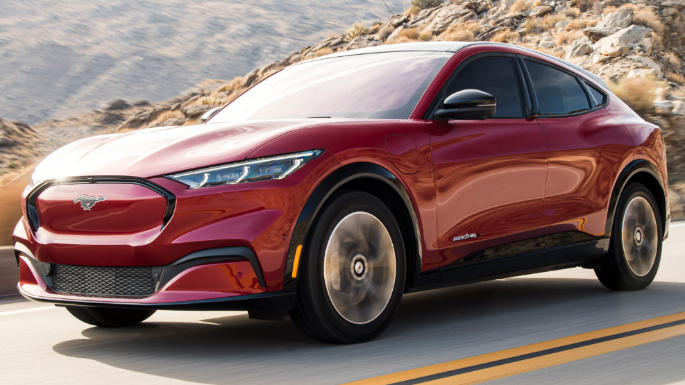 Electric cars can feel harsh and unrefined over bumpy roads, because of their weight and battery positioning. The same is true for the Mach-E, but its suspension and sound-deadening materials do a good job at keeping the worst sounds and vibrations out of the cabin. Silence from the electric powertrain and the minimal amount of wind and road noise that make their way into the cabin add up to a relaxing and peaceful driving experience.

Despite its name, the Mustang Mach-E is not as thrilling as its gas-powered counterparts. To be fair, it’s quick and handles well, but the Mach-E is best when used as a frugal commuter car instead of a rowdy performance SUV. Even so, specs for the Mach-e GT, which extend to 480 horsepower and over 600 lb-ft of torque, indicate one quick zero-emissions vehicle. 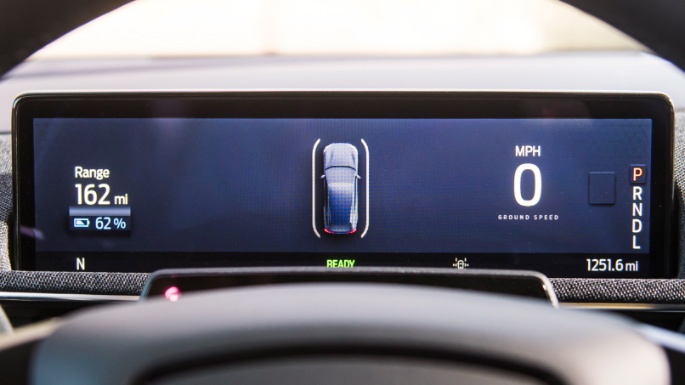 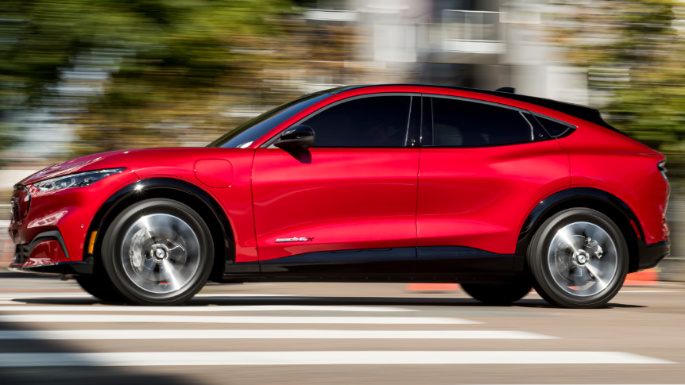 The $51,500 Mach-E California Route 1 gets CA1 badging, an extended-range battery, and rear-wheel-drive.

The $61,000 Ford Mustang Mach-E GT gets the extended-range battery pack and more powerful electric motors. Stepping all the way up to the Mach-E GT Performance Edition drives the MSRP to $66,000.

If we were shopping for a Mach-E today, we’d opt for the mid-level Premium trim and add a few extras. Even with the long-range battery and all-wheel-drive, the Mach-E Premium’s price tag remains quite reasonable. The trim also brings several desirable features, such as a panoramic glass roof, and all-wheel-drive greatly improves traction and stability in poor weather conditions.