A twin-turbocharged 3.3-liter V6 engine that produces 365 horsepower, with an eight-speed automatic and rear-wheel drive.

All-wheel drive is optional with both engines.

The most noticeable change to the G70 for 2022 is its refreshed exterior and interior styling. These changes help align the G70's appearance more with new Genesis sedans and SUVs. Split headlights and taillights lead the style updates.

Several standard features have also been added, including a larger 10.25-inch touch screen, heated front seats, a navigation system, a rear-seat safe exit system, and a rear-seat reminder system. It lets you know when a child or pet could be left in the back seat. In addition, the manual transmission option has been dropped for this year.

Would we buy one? Absolutely! You're missing out if you skip over the G70 because it isn't a BMW, Mercedes-Benz, or Audi. 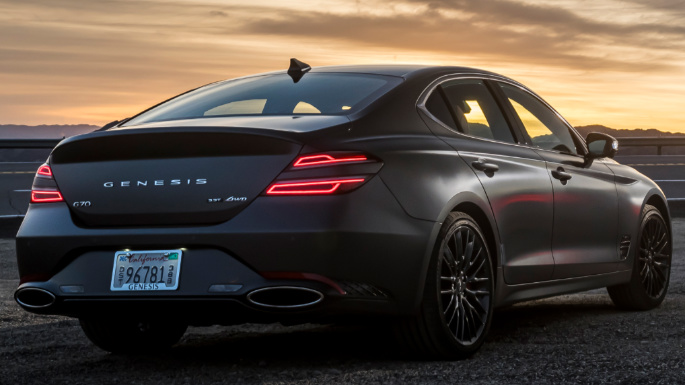 This is only the G70's fourth year on sale, and its 2022 mid-cycle refresh has only helped keep it competitive. In addition, its stellar performance, excellent build quality, value for the money, and surprisingly luxurious feel have given competitors pause as it has helped somewhat reset the bar for what a luxury car should be.

Even though it is a little more well-rounded, it does not quite attain the level of luxury that the G70 and many of its rivals offer.

Despite not having the brand recognition of most of its competitors, Genesis' parent company, Hyundai, has done an excellent job outfitting the entire Genesis lineup with appealing features to would-be luxury vehicle buyers. Further bolstering its appeal, the G70 and other Genesis models get a superb 10-year/100,000-mile powertrain warranty. 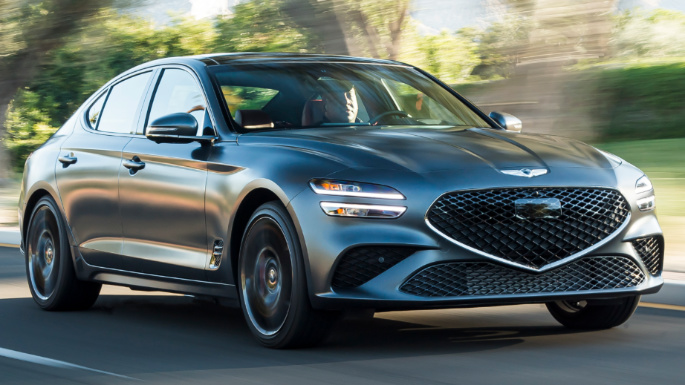 The G70's engine options give it plenty of power, but the larger twin-turbo V6 stands out from many competitors. Its standard rear-wheel drive, sharp handling, and firm suspension push it towards being a sports sedan rather than a luxury cruiser. Competitors like the 3 Series and CT5 offer specific performance variants within their lineups, but they cost thousands more than the V6-powered G70.

Deleting the manual transmission that was only available with the base 2.0-liter turbo engine is slightly disappointing for some. But when we tested it several years ago, we came away underwhelmed by the feel of the shifter so we're all probably better off just having the automatic transmissions to contend with.

Plus, the eight-speed automatic is smooth and quick to shift. The 113-horsepower advantage the V6 has over the turbo-four should also be more than enough to keep any enthusiast happy.

With 365 horsepower and 376 lb-ft of torque and launch control, the twin-turbo V6 can power the nearly two-ton car to 60 mph in under five seconds, according to Genesis. Braking is solid and linear, especially in the 3.3T Sport Prestige trim with the Brembo brakes. And ride quality is not compromised for spirited driving, as the G70 soaks up bumps quite well.

Overall we found the driving experience in the G70 quite thrilling, certainly more fun than an Audi S4, Mercedes C-Class, and possibly even the BMW 3 Series. Only the Alfa Romeo Giulia is better from behind the wheel in this segment. 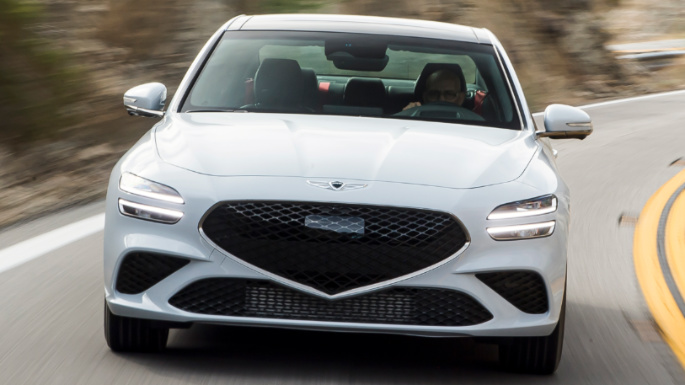 The value offered by the Genesis G70 makes it stand out from the rest of the segment. It carries a lower starting price than many of its rivals with more standard features, offers a powerful twin-turbocharged V6 engine, and comes with a better warranty than any other competitor.

Many standard technology features, including the added heated front seats and new driver assistance safety systems, help it stand out even further. Its interior is also one of the best in the class, an area usually led by Audi and BMW.

For around $45,000, the Genesis G70 comes with all-wheel drive and a 365-horsepower V6 engine. A comparably priced Audi A4 does offer more cargo and passenger space, all-wheel drive, and better fuel economy. Still, it can only muster 261 horsepower, doesn't offer as many driver-assist features, and isn't as engaging to drive. 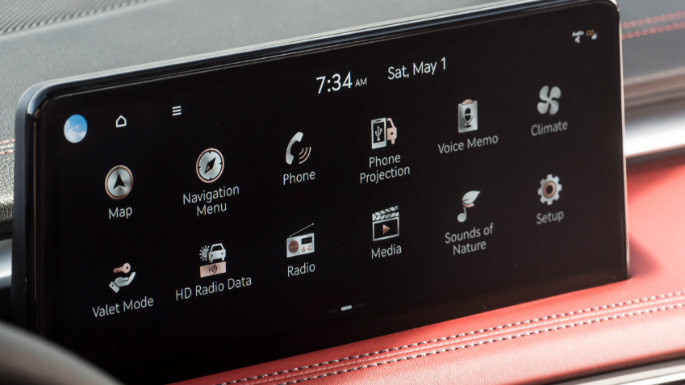 The G70's tech features align with segment competition, especially with Genesis' addition of a new standard 10.25-inch touchscreen. Many competitors have smaller touchscreens, but competitors like the BMW 3 Series and Audi A4 come standard with a large digital gauge cluster that compliments their comparably sized touchscreen displays.

Most competitors offer comparable tech features, while some have additional niceties like heated rear seats in the BMW 3 Series and massaging front seats in the Cadillac CT5. 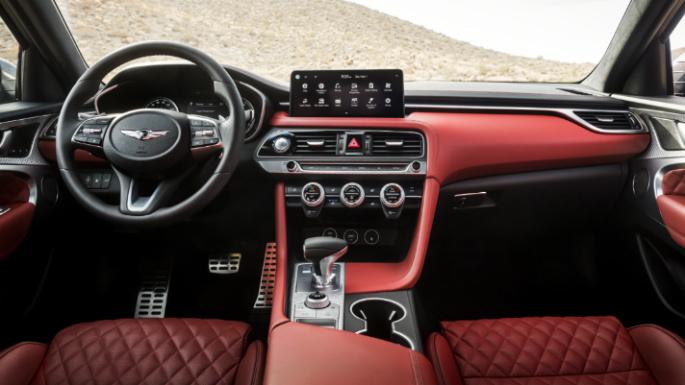 The 2022 Genesis G70 is a very safe car. It has earned a Top Safety Pick+ award from the IIHS. The only area in which the IIHS has not awarded it the highest rating of superior is in its vehicle-to-pedestrian safety system, in which it has been awarded the second-highest rating of advanced. Unfortunately, the NHTSA has not yet rated the G70.

With a comprehensive list of standard safety features, only a few additional features are available on the higher 3.3T trim levels. These include a head-up display, parking sensors, and a 360-degree surround-view camera system. 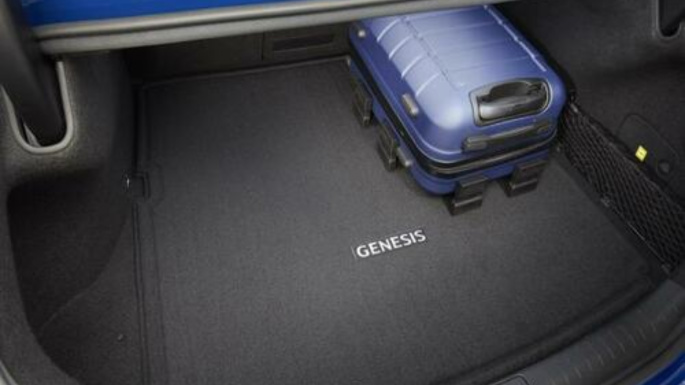 Even though the G70 is classified by the Environmental Protection Agency (EPA) as a compact car, its cargo capacity and passenger space are lower than average compared to most competitors. Interior cubby space is also somewhat limited. There are just 10.5 cubic feet of space in the trunk, with an additional 3.5 cubic feet if you fold down the back seats. The Audi A4 features 12 cubic feet of trunk space, the BMW 3 Series offers 17 cubic feet in the trunk, and the Lexus IS has 10.8.

All the seats in the G70 are comfortable and well-bolstered, but rear-seat passengers have to contend with limited legroom and headroom. That could be dismissed based on the car's overall size, but most competitors offer more spacious interiors. At least the front seats are more welcoming to taller passengers.

Despite its shortcomings, the G70 makes up some points with its available all-wheel drive, a feature common within the segment but usually included by a hybrid powertrain. Also aiding in its practicality score is its simple interior layout and easy-to-use infotainment system, which is surprisingly uncommon in the class. 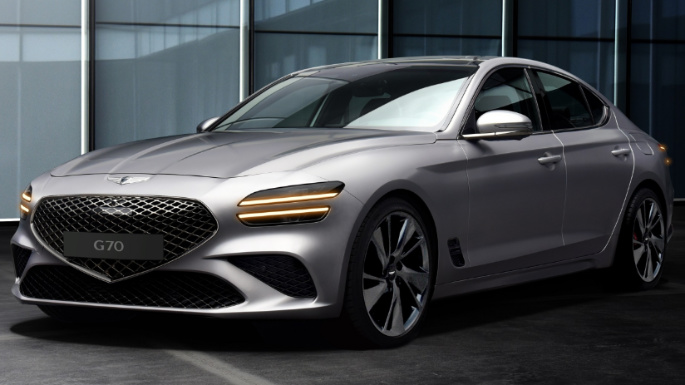 The G70's exterior styling combines sporty and luxury elements to produce an attractive vehicle. Its 2022 refresh has brought it closer to the appearance of the larger and more luxurious G80 sedan, but its low, fairly wide stance makes it look athletic as well. In addition, the large grille is not egregious and does not detract from its appearance like some competitors.

The G70's interior is perhaps more attractive than its exterior. It is simple, but everything is thoughtfully laid out. High-quality materials and soft-touch surfaces cover just about everything with a hint of sportiness, similar to the exterior. Leather upholstery comes standard on all but the base model trim, with higher-grade Nappa leather on the highest trim levels.

Our only gripe was that while we appreciated the larger infotainment screen that was introduced for 2022, the cabin is starting to show its age, relative to some of the newer entrants in this segment and their more tech-heavy approach. 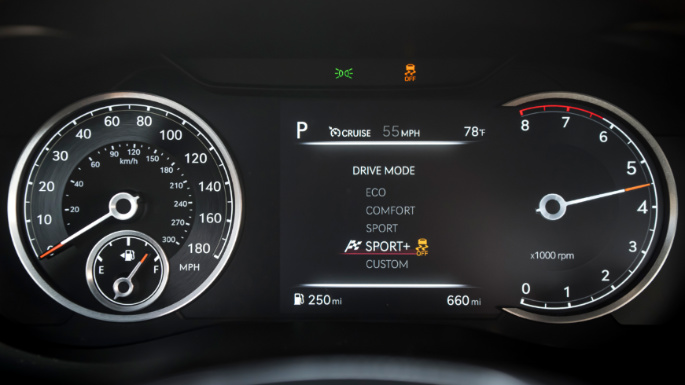 With the base engine and rear-wheel drive, the G70 returns EPA estimates of 21 mpg in the city and 31 on the highway. These numbers drop to 20 mpg city and 28 highway with all-wheel drive.

The 3.3T rear-wheel-drive models dip to 18 mpg city and 27 mpg highway, and adding all-wheel drive pushes it down further to 17 and 25 city and highway, respectively.

These are among some of the worst EPA estimates in the class as many competitors begin offering hybrid, plug-in hybrid, and electric options throughout their lineups.

Front-wheel drive Volvo S60 models return EPA estimates of 26 mpg in the city and 35 mpg on the highway with a standard 48-volt mild-hybrid system (and the S60 is available as a plug-in hybrid). The Audi A4 returns 25 city and 34 highway with its standard all-wheel drive and 2.0-liter turbocharged four-cylinder engine. 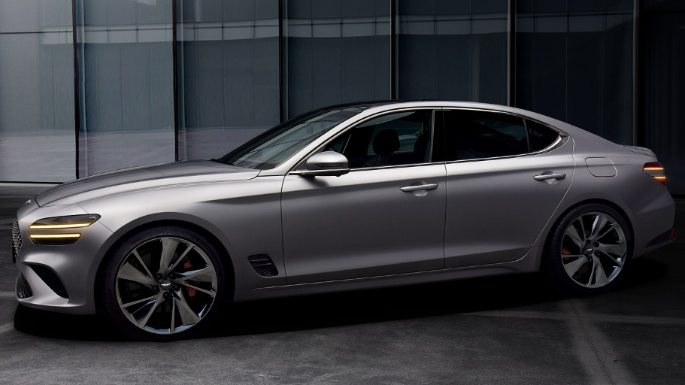 The base Genesis G70 2.0T starts at $38,870, including the destination charge. All 2022 G70s come standard with an eight-speed automatic transmission and rear-wheel drive. All-wheel drive is optional and also adds a heated steering wheel.

This is probably the trim we'd prefer; it has all of the goodies you want in a luxury sport sedan (and then some), at a super-competitive price.

The Genesis G70 3.3T Sport Prestige costs $51,475. It includes Nappa leather upholstery, a microfiber suede headliner, a head-up display, a surround-view camera system, a heated steering wheel, Brembo brakes, and a limited-slip differential. This was the model we tested.