Powertrain: Front and rear electric motors for a combined output of 234 kW and 314 horsepower with all-wheel drive and a 77.4 kWh battery pack

Front and rear electric motors for a combined output of 320 kW and 429 horsepower, with all-wheel-drive and a 77.4 kWh battery pack.

The Genesis GV60 is a new vehicle for 2023. It’s the brand’s smallest SUV and also its first all-electric vehicle. It's largely based on the same platform as the Hyundai Ioniq 5 and the Kia EV6 (all three brands are share a parent company).

Would we buy one? Probably. The GV60 is an accomplished first EV for Genesis, and Hyundai has proven its electric expertise as an automaker. However, it’s on the pricier end for vehicles of this size, and the Hyundai Ioniq 5 and Kia EV6 are better valued. 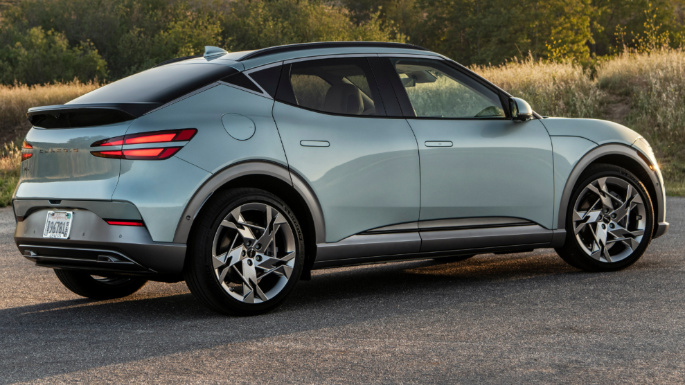 The Genesis GV60 is not only a new type of vehicle for the emerging luxury arm of Hyundai but also the brand’s first electric vehicle. It shares many pieces from the corporate E-GMP platform with the Hyundai Ioniq 5 and Kia EV6. Still, the Genesis gets its own styling inside and out, more standard equipment, and upscale materials to let it battle with other small luxury SUVs — electric or not. 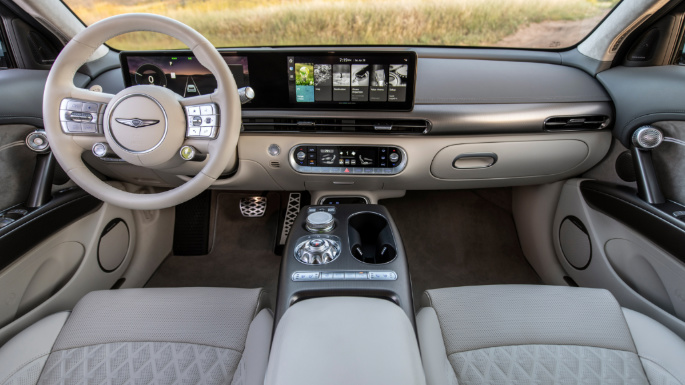 Less-typical driver-assist technology includes a blind-spot view monitor in the instrument panel that lets drivers see precisely what’s in the vehicle’s blind spot when the turn signal is activated. Remote park assist is also included, which allows the car to move short distances in a parking stall or on a street space.

And the rear occupant alert and safe exit assist let drivers know if a child might be left in the back seat, while the safe exit prevents passengers from opening the rear doors into traffic.

The GV60 has not yet been tested by either the Insurance Institute for Highway Safety (IIHS) or the National Highway Traffic Safety Administration (NHTSA). 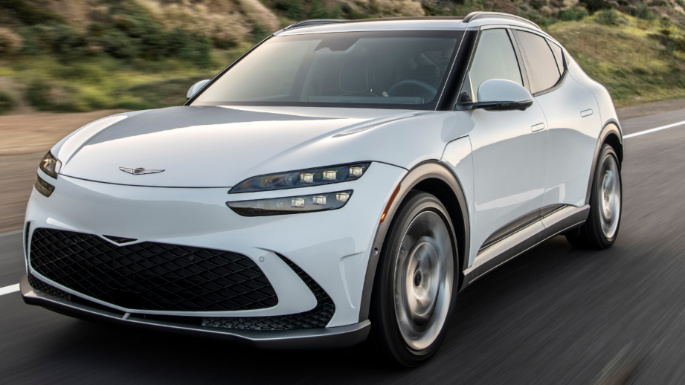 As the spec sheet suggests, the GV60 is powerful even among powerful electric SUVs. While the lower-powered Advanced and its 314 horsepower isn’t the strongest EV around, it’s more than adequate given the GV60 isn’t that large. However, the Performance and its 429 horsepower — with a boost mode that produces 483 horsepower for up to 10 seconds — is decidedly quick enough to contest any Model Y or Mustang Mach-E, let alone any internal combustion model.

While EVs can be quick off the line, they’re not inherently good when the road stops being straight. However, the GV60 holds its own in adventurous driving, giving a good impression of a performance hatchback. The Performance trim’s electronic limited-slip differential and electronically adaptive suspension have their work cut out putting all of the power down and dealing with large 21-inch wheels, but it all seems to work together. 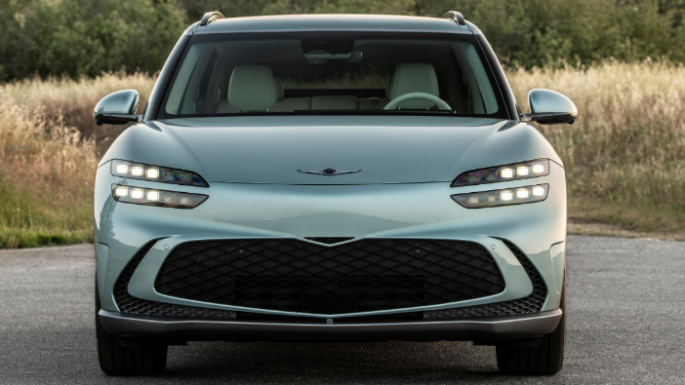 The GV60 comes in two versions with different power ratings and mild differences in equipment. Yet, for just under $60,000 before EV incentives, even the least expensive GV60 looks pricey against small EV SUVs. And that’s also factoring in the generous 10-year/100,000-mile powertrain warranty when buying new.

But the base GV60 Advanced is well-equipped with a slew of standard driver-assist tech, a Bang & Olufsen audio system, panoramic roof, and so many other features that there aren’t any options other than metallic paint.

That said, while the more powerful GV60 Performance looks impressive on paper with its 429 horsepower and extensive equipment list, it’s too much money when the larger Audi E-tron and Jaguar E-Pace are nearly as well equipped and cost only slightly more. And the Volvo C40 and XC40 Recharge models have almost as much power and range for about $9,000 less.

And it doesn’t help that the closely related Ioniq 5 and EV6, while not carrying premium branding, are also significantly less expensive than the GV60, as is the Mustang Mach-E in a high-performance guise. 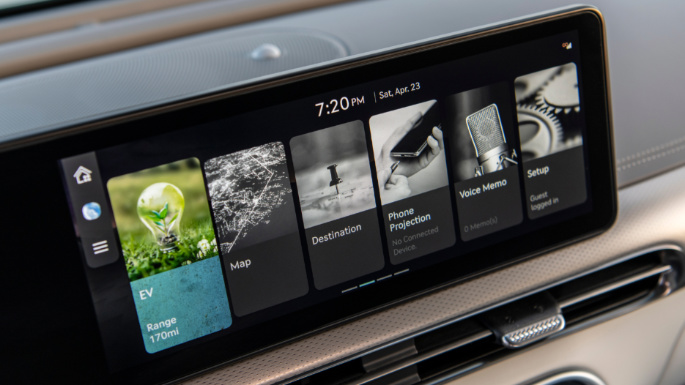 The standard dual 12.3-inch displays for the gauge cluster and climate and infotainment systems may not look as dazzling as the dual displays on the Mercedes-Benz EQB or have the overall dominance as the Tesla Model Y’s 15-inch display, but it works better than both. They’re also reasonably responsive, though the GV60 relies on them more than the Ioniq 5 or EV6, which have more physical switches and shortcuts.

As the GV60 is highly equipped, every model comes with a head-up display, high-end Bang & Olufsen audio system, wireless smartphone charging, and a fingerprint and facial-recognition system that lets you unlock and start the vehicle without the key remote. It’s an interesting feature but raises some privacy concerns that will undoubtedly be debated on all new cars in the future.

Apart from the fingerprint and facial recognition system, the GV60 breaks little new ground for in-car tech. And it’s missing some features that are increasingly common on new cars of all prices, such as wireless Apple CarPlay and Android Auto connectivity. But it also executes the technology better than some rivals. 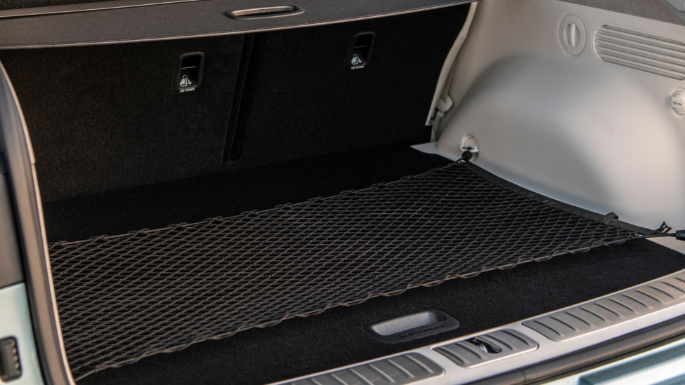 Despite its tidy exterior dimensions, the GV60 sits somewhere midpack among its EV rivals and is slightly roomier than other small premium SUVs. There’s a good 24 cubic feet of cargo space with the rear seat up, which expands to almost 55 cubic feet with it down. That’s about what the Q4 E-tron offers, less than a Model Y, but more than an XC40 Recharge.

But the GV60’s sleek styling doesn’t do it favors for outright usefulness. The coupe-aping roofline limits the shape of what goes into that cargo space, as it does on many modern SUVs. The EQB will also offer a (small) third-row seat that will stretch overall capacity, too, something unusual for any electric car.

At least there’s a reasonable amount of interior and center console storage, and it’s easy enough to see out of the front of the vehicle. Standard all-wheel-drive helps its case over others with a single-motor powertrain, but the 2,000-pound maximum towing capacity falls behind the Model Y and Q4. 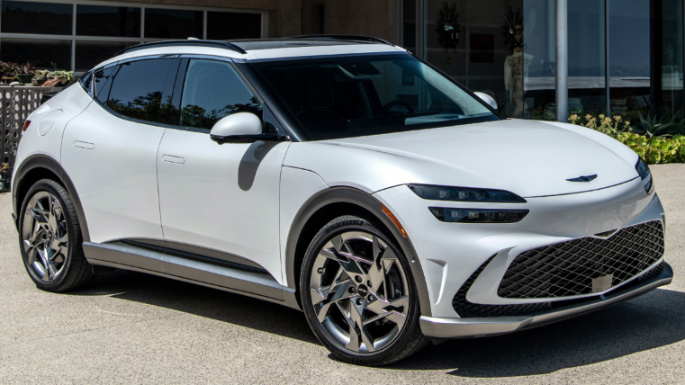 Even though it’s similarly sized to the related Ioniq 5 and EV6 that both have relatively long wheelbases, the Genesis GV60 looks different enough thanks to being shorter in length yet about the same height as the Hyundai, with dimensions that look more hatchback than small crossover SUV. And even alongside the rest of the Genesis line, the GV60 stands out instead of being a GV70 or GV80 copied at 75%. It looks odd without the prominent Genesis grille, but it’s more distinctive than the norm for SUVs this size.

The interior owes a little more to the rest of the Genesis line. It’s a clean design, and Hyundai’s corporate layout for the infotainment, climate, and instrument panel controls is about as straightforward as it gets from a premium brand. That’s why it’s unfortunate that the materials aren’t quite to the standard of other Genesis models, which is noteworthy considering the GV60’s lofty price even after incentives. However, the rotating crystal sphere that turns into a gear selector when the car is on is a decadent touch.

The Environmental Protection Agency (EPA) rates the GV60 Advanced AWD at 95 MPGe combined city/highway, the electric equivalent of miles per gallon based on range and kilowatts per hour used. The Performance AWD model is rated at 90 MPGe. While that’s on par with the Q4 E-tron, C40 and XC40 Recharge, and certain versions of the Mustang Mach-E, it’s behind more efficient rivals like the Tesla Model Y.

The GV60 Advanced is EPA-rated at up to 248 miles on a full charge, and the Performance 235 miles. Again, that’s slightly better than the 408-horsepower Volvo EVs and 295-horsepower Q4. But the Mustang Mach-E offers different battery sizes that can take up to 300 miles on a charge, and the Model Y Long Range AWD is rated at 330.

The GV60 supports 800-volt DC fast charging, but you’re not likely to find such a charger in the US soon. However, the 11-kWh onboard charger is better than some in this segment. 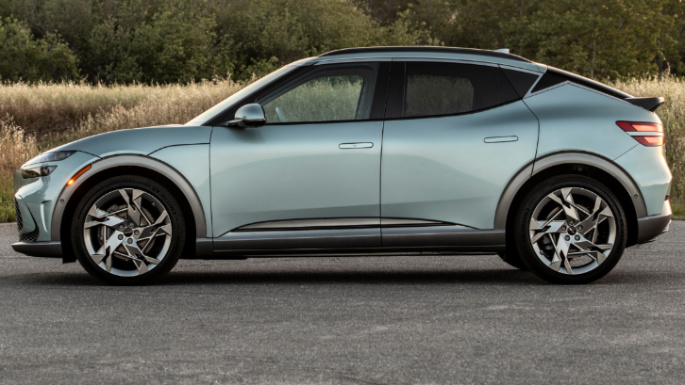 The 2023 Genesis GV60 is priced from $59,985 to $68,985 MSRP, including the mandatory $1,095 destination charge, but before any local and federal EV incentives. It comes in two trim levels that have two levels of power. All versions use a single-speed transmission and have dual electric motors with all-wheel-drive. And the only factory option is metallic paint.

We would pick the Advanced model because it includes many desirable features for its somewhat lofty asking price, placing it in direct competition with top-level versions of the Audi Q4 E-tron and Volvo XC40 Recharge, where the Genesis competes well for range or power. But the Performance model, at an additional $9,000, is no match for high-level trims of the Ford Mustang Mach-E, BMW iX, and Jaguar E-Pace, despite its power and list of features.