Powertrain: The base offering is a 193-horsepower, 2.5-liter four-cylinder engine with a nine-speed automatic transmission and front-wheel-drive. 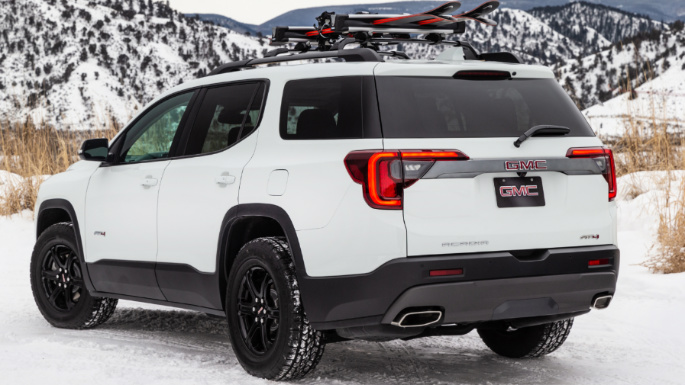 The GMC Acadia is another entry in the midsize SUV segment, offering five or seven seats and serving as a viable family vehicle or a versatile package for those who need to alternate between space for cargo or passengers.

A revised exterior design is the biggest news for 2020, with new LED exterior lighting, new wheel designs, and minor interior changes. All models use a new infotainment system with an eight-inch touchscreen.

The new off-road-oriented AT4 model features its own styling details, with standard all-wheel-drive and a more rugged appearance.

All models get a new nine-speed automatic transmission in place of a six-speed unit, along with a redesigned center console that now uses an electronic shifter to free up space.

A 230-horsepower, 2.0-liter turbocharged four-cylinder engine, a head-up display, and a rearview camera mirror will also be available. 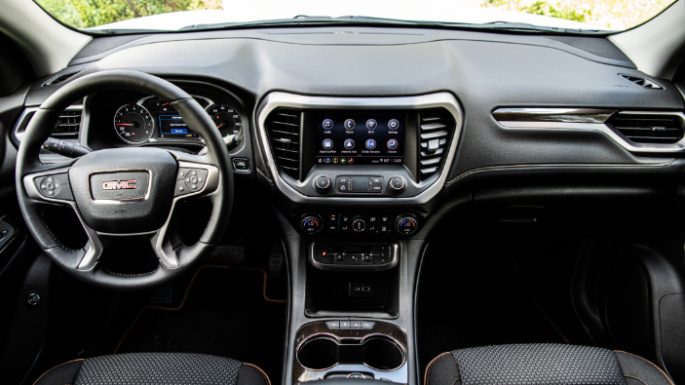 The National Highway Transportation Safety Administration (NHTSA) awarded the 2020 Acadia a five-star rating in overall tests, its highest score. The Insurance Institute for Highway Safety (IIHS) gave the Acadia high marks in crash tests, as well as crash avoidance with its available driver assistance technology. But it was not awarded a Top Safety Pick rating when many of its rivals were.

All 2020 Acadia models receive blind-spot monitoring, rear cross-traffic alert, rear parking sensors, and OnStar telematics with emergency calling. But it requires a big step up to an SLT model to get automatic emergency braking with forward-collision warning and pedestrian detection, and a lane-keep assist system. Adaptive cruise control is also only available on the top Denali model.

Rival automakers do a better job of democratizing these driver assistance systems across the model line, and an increasing number of them make at least automatic emergency braking standard. 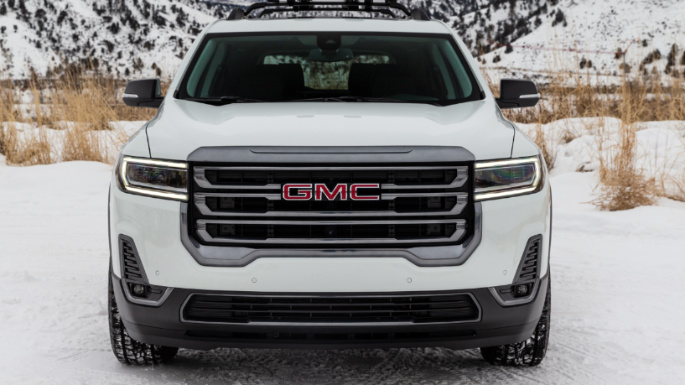 The Acadia starts reasonably enough at just under $31,000. The base SL model is also fairly well-equipped with items such as seating for up to seven passengers, alloy wheels, tri-zone automatic climate control, and Apple CarPlay and Android Auto. But it’s only available with the base four-cylinder engine and front-wheel-drive, mostly because it’s targeted at the fleet market (think rentals).

Fully loaded, an Acadia Denali comes in at just under $50,000, putting it on par with top versions of the Honda Pilot and Volkswagen Atlas, while higher than a Kia Sorento. Considering it’s on the smaller end of the three-row SUV scale, however, the Denali and the AT4 models are somewhat overpriced.

An Acadia SLT with the V6 and all-wheel-drive and driver assistance technology still comes in around $45,000, and that’s still on the high end. The larger Hyundai Palisade and Kia Telluride are better equipped for that price, while the much larger Buick Enclave and Chevrolet Traverse aren’t much more money than the Acadia. 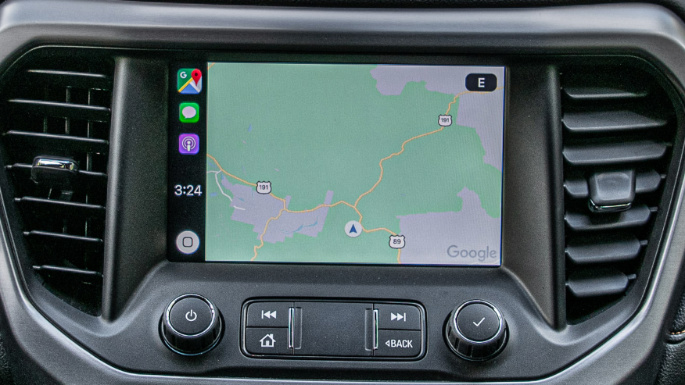 The Acadia comes standard with an eight-inch touchscreen infotainment system using GMC’s IntelliLink setup. A 4G LTE wi-fi hotspot is also standard, as well as up to five USB ports, including USB-C ports. This means no one should be fighting for a place to charge electronic devices. A household-style three-prong outlet is also available on most models, as is a wireless charging pad.

Built-in navigation comes on SLT and higher trims that can also work with an OnStar telematics subscription. Revised for 2020, the system can also use a cloud-based database for predictive navigation, as well as be set up with common destinations based on the driver’s settings. It’s also one of the clearest systems on the market. A standard Teen Driver system can allow different keys to be programmed with speed restrictions and audio volume limits for new drivers.

A head-up display is available on SLT and higher trims, while Denali models come with a highly configurable 8-inch driver information display in the instrument panel, although it’s not as configurable as the digital gauges found on the Explorer and VW Atlas models. Also available is a surround-view camera and a rearview mirror that can also display a camera image at the flip of a switch. 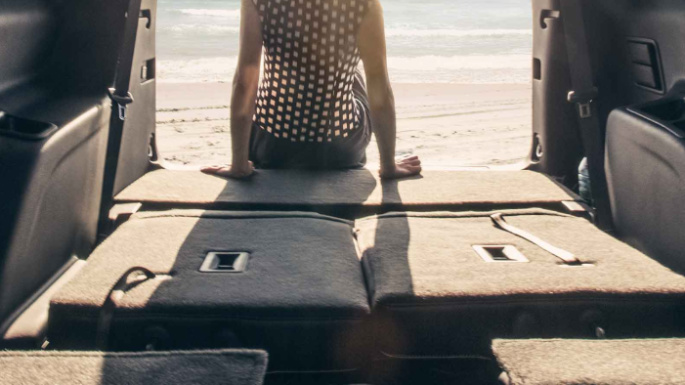 While it’s pitched against other three-row SUVs, the Acadia can be equipped with five, six, or seven seats depending on the model. Only the AT4 does without a standard third-row seat, but at least it’s a no-cost option.

SLT and Denali models come standard with second-row captain’s chairs that reduce capacity to six. And the Acadia is already at somewhat of a disadvantage in terms of passenger space, offering less than many rivals such as the Ford Explorer, Subaru Ascent, and even GM’s own Buick Enclave and Chevrolet Traverse – where there are up to eight seats and adults can sit happily in the third row.

The Acadia also doesn’t have the cargo space of some larger rivals, but it’s not too far off of models such as the Dodge Durango and Honda Pilot with all of the seats folded. The second-row lacks the versatility of a 40/20/40 split bench found in the smaller Kia Sorento, though.

Towing capacity is 4,000 maximum on V6 models, but just 1,000 on four-cylinder versions. Even that 4,000-pound limit pales in comparison to some rivals, especially the Durango when it’s equipped with an optional V8 engine. 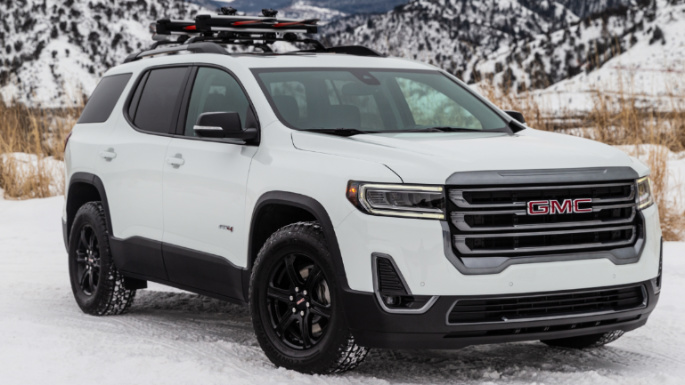 SL, SLE, and SLT models largely share the same exterior styling, save for some minor details. The AT4 gives off more of a rugged appearance with a black grille and off-road tires, while the Denali gets its own grille design similar to that of GMC’s other Denali models, as well as more chrome and larger wheels. This means there’s an Acadia to suit numerous tastes.

For the most part, the Acadia’s interior is easy to use and well-designed. The infotainment system is one of the easiest to use in the industry, with clear graphics and a responsive interface, and the physical controls for basic audio and climate functions are easy to reach.

A new center console design increases the space for storage, but it comes with an unnecessarily complex set of buttons for the shifter rather than a traditional gearshift.

And even on the top-level Denali models, the interior quality isn’t anything special. Base models feel the most bargain-basement, disappointing in the wake of the interior design found in vehicles such as the Mazda CX-9. 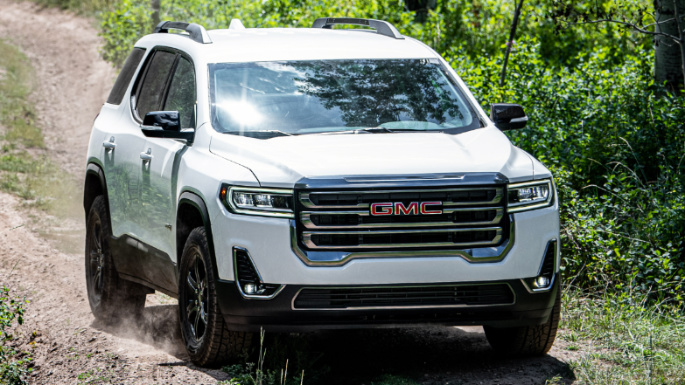 The base engine for the Acadia is a 193-horsepower, 2.5-liter four-cylinder engine that’s standard on SL and SLE models and only with front-wheel-drive. That’s good because it’s not really powerful enough to move the Acadia with much authority, and especially deficient when loaded with seven passengers.

The 230-horsepower, turbocharged 2.0-liter four is better, but the 310-horsepower, 3.6-liter V6 is really the engine that’s best-suited for this vehicle, and it hardly gets worse fuel economy than the four-cylinder models.

The Acadia’s smaller size compared to some of its rivals doesn’t necessarily pay off in making it drive like a smaller vehicle. While it’s no less athletic than the typical midsize three-row SUV, it never feels particularly car-like to drive. The ride can also be floaty at times, and bumps can be noticeably felt on models with larger tires.

An adaptive damper control system for the suspension on Denali models helps smooth things out a little more.

One thing the Acadia’s size does do for the driver is to make it more maneuverable in city traffic and when parking. Being nearly a foot shorter than a Chevrolet Traverse makes it more livable in areas where street parking is the norm.

AT4 models get a more sophisticated all-wheel-drive system with settings for different terrain in a bid to give it more off-road capability. While it can handle more than some rivals, it lacks the adjustable suspension options and genuine prowess of a Jeep Grand Cherokee.

Acadia models with all-wheel-drive also offer selectable presets for different road conditions, as well as a setting to lock the system in two-wheel-drive for improved fuel economy. 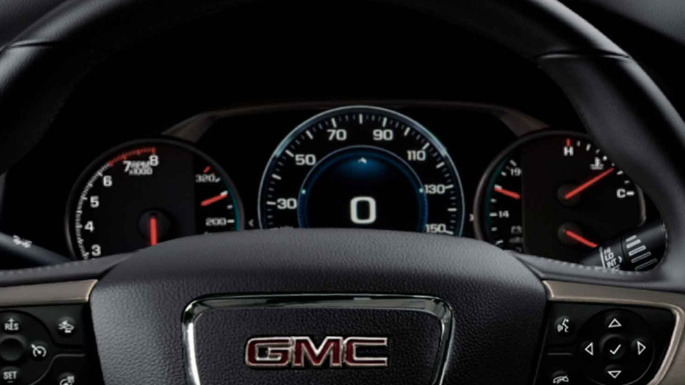 The Environmental Protection Agency (EPA) rates the 2020 GMC Acadia with the 2.5-liter four-cylinder engine at 21 mpg city, 27 highway, and 23 combined.

The turbocharged, 2.0-liter four with standard front-wheel-drive is rated at 21 city, 28 highway, and 24 combined, while all-wheel-drive versions fall one mpg in highway and combined ratings.

The Acadia with the V6 engine and front-wheel-drive is rated at 19 mpg city, 27 highway, and 22 combined, while AWD variants drop those figures to 18 city, 25 highway, and 21 combined.

The Acadia has competitive fuel economy for its class, but it’s nothing particularly exceptional. Considering its low horsepower rating, the 2.5-liter engine doesn’t deliver fuel economy figures that are considerably better than the much more capable V6 engine.

V6, however, is more thirsty with fuel than a similarly powerful Toyota Highlander. That’s what makes the 2.0-liter turbocharged engine the best compromise in terms of fuel economy and power, even if it’s just as fuel-efficient as the larger and more powerful Ford Explorer with its turbo four-cylinder. GMC also doesn’t offer any electrified version of the Acadia to compete with the Explorer and Highlander hybrids. 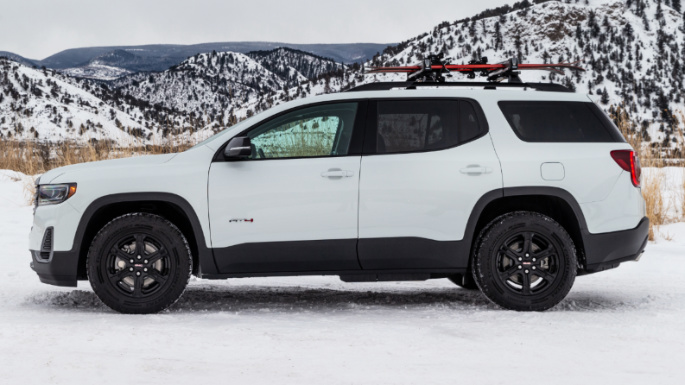 There are no factory options for the SL.

The Acadia SLE starts from $34,995 MSRP. It adds to the SL’s features 18-inch wheels, compact spare tire, and first and second-row floor mats. All-wheel-drive with the 230-horsepower turbocharged 2.0-liter four-cylinder engine or the 310-horsepower, 3.6-liter V6 is optional.

A panoramic moonroof is available with the V6 engine, as are second-row captain’s chairs. Other options include a trailering package, wireless charging pad, and a rear-seat entertainment system with or without a built-in DVD player.

Leather upholstery is optional, as is a third-row seat with either a second-row bench or captain’s chairs, trailering package, and Driver Alert package. A wireless charging pad, rear entertainment system, and 20-inch wheels are also standalone options.

The Technology Package includes a rear camera mirror in the rearview mirror, exterior camera washer, adaptive cruise control with a low-speed setting, a head-up display, full-speed automatic emergency braking, and a surround-view camera. The Denali Ultimate Package adds those features as well as the trailering package, panoramic moonroof, and adaptive ride control. The moonroof and trailering package are available as standalone options, as is a second-row bench seat and a rear-seat entertainment system.