When it comes to buying a new pickup truck, the possibilities are endless, thanks to several configurations available for the segment of pickup trucks.

Most of today's new trucks have abandoned their workhorse roots to become luxury vehicles with all the options; however, some cost upwards of six figures, and not all offer four-wheel-drive.

If you are looking for a vehicle with the ability to go off-road like a Jeep Wrangler but with the stellar size and versatility of a work truck, then look towards a 4x4 pickup truck. If you don't want the six-figure new car sticker price of the latest truck models, then there are a few cheap 4x4 trucks out there delivering genuine four-wheel-drive capability and pure ruggedness for those off-the-beaten-track adventures.

If you are willing to sacrifice the niceties of heated and cooled front leather seats, self-parking features, and fancy infotainment systems for pure off-road enjoyment in a cheap 4x4 truck, then check out our list below of the best used 4x4 trucks under 5000 dollars. 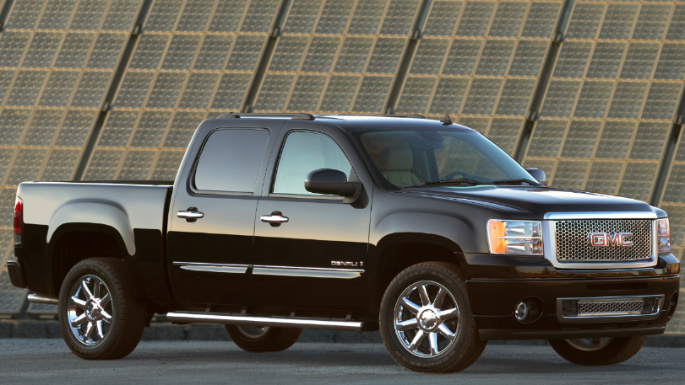 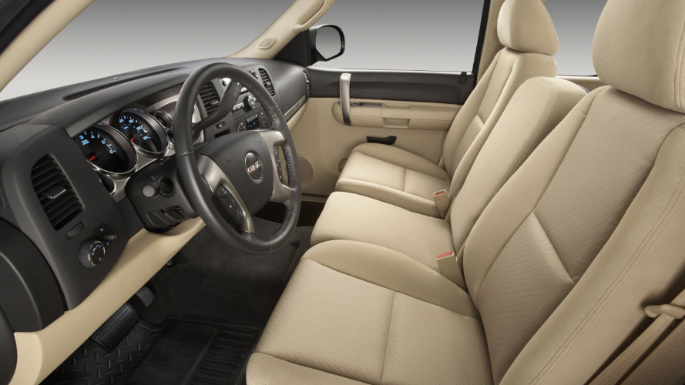 The 2007 GMC Sierra 1500 offers one of the best combinations of power, handling, and comfort in its class for that model year. It also boasts a long list of standard safety and convenience features, including Bluetooth and a touchscreen navigation-sound system.

Long regarded as the twin of the Chevy Colorado, the 2007 GMC Sierra is available with one of three cabs, six engines, three cargo beds, five suspensions, and a choice of two- and four-wheel-drive models. The 195-horsepower 4.3-liter V6 engine and the 295-horsepower 4.8-liter V8 engine options with four-wheel-drive are more than adequate for work truck applications and off-road driving. They can be found around the $5,000 mark for a used vehicle. 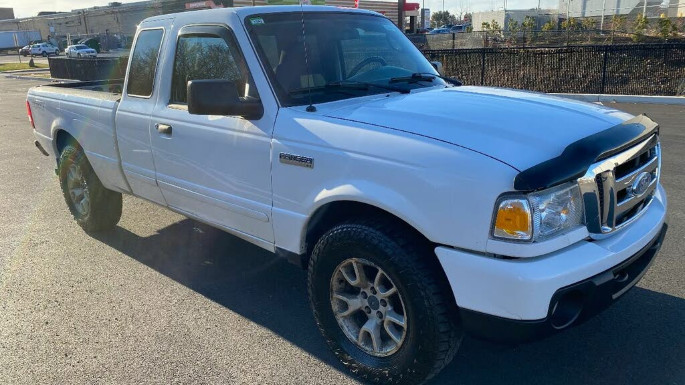 If you want a compact pickup truck that is inexpensive to operate and own, then the 2008 Ford Ranger is one of the best cheap 4x4 trucks. It competes well against similar rivals thanks to numerous upgrades, rock-bottom pricing, and fresh styling for its era; however, it does fall behind the GMC Canyon and Chevy Colorado with less horsepower. 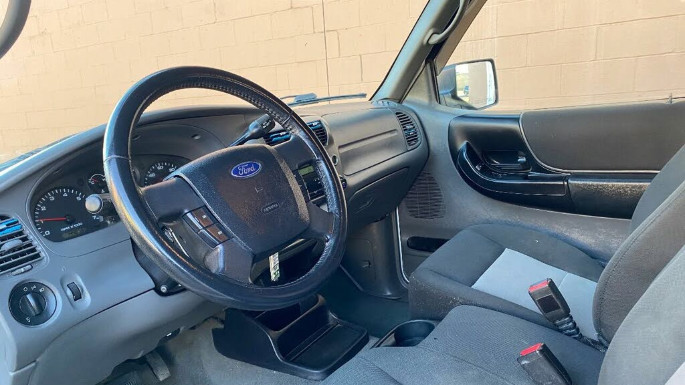 If you are a fully-fledged off-road enthusiast or looking for decent towing capability, Ford offers two powertrain options for 2008 around the 5,000 dollar mark. The first is a 148-horsepower 3.0-liter V6 engine and the 207-horsepower 4.0-liter V6 engine. Both configurations can be paired with four-wheel-drive, and you can pick up an excellent condition 2008 Ford Ranger for around $6,400. 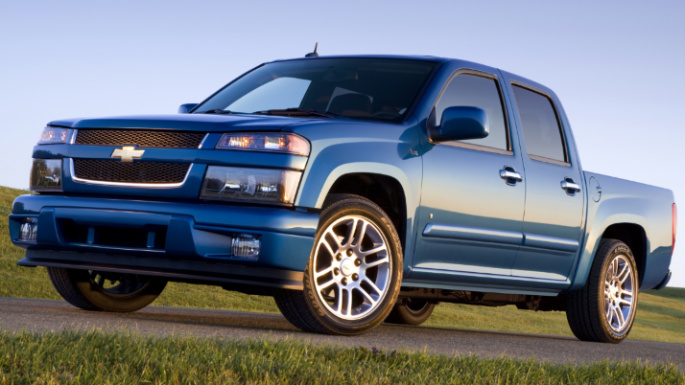 The 2007 Chevrolet Colorado is a compact pickup truck available in three body styles, including a regular cab, an extended cab, and a crew cab with four standard doors. A near-twin of the Colorado is the GMC Canyon. The Colorado delivers a good-looking and practical exterior, a solid crash test performance, and excellent pickup truck handling. While it may not share the same interior comfort as other rivals in its class, it does come in as one of the cheapest 4X4 trucks. 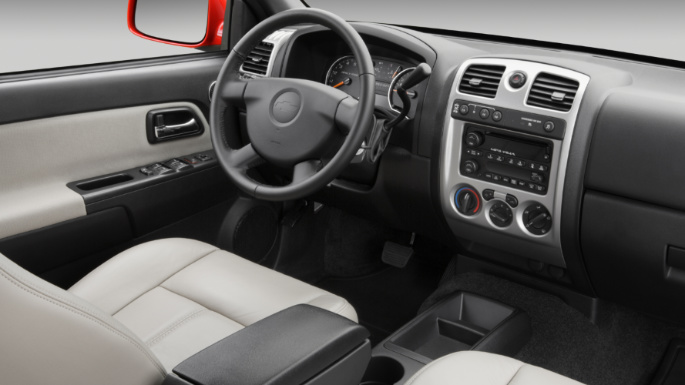 According to Kelley Blue Book, "The little Colorado makes an attractive alternative for those whose truck use tends to be more recreational than occupational." So, if you don't mind giving up luxury seating and top-of-the-line technology, the 2007 Colorado will tick the boxes as an off-road, hauling, and towing choice.

Two engines are available for the 2007 model, including a 185-horsepower 2.9-liter inline-four engine with 195 lb-ft of torque (more than any four-cylinder engine offered in a pickup truck) and a 242-horsepower 3.7-liter inline-five engine. All four-wheel-drive models feature a dual-range transfer case with push-button controls and an optional rear differential. 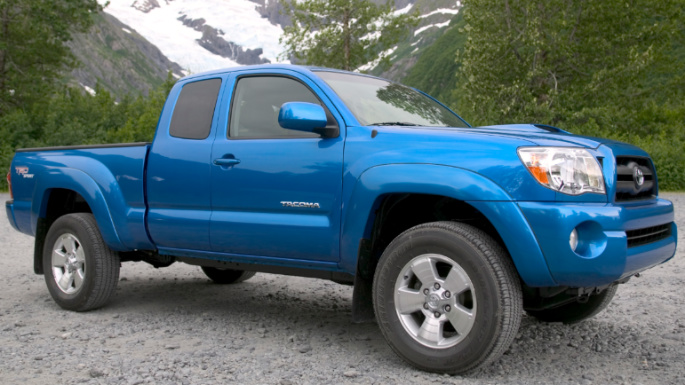 The 2007 Toyota Tacoma is a great all-around pickup truck that holds its value well among used cars in its category. It impresses with its refined standard powertrain combinations, proven history of reliability, excellent crash test score, and impressive off-road capabilities. 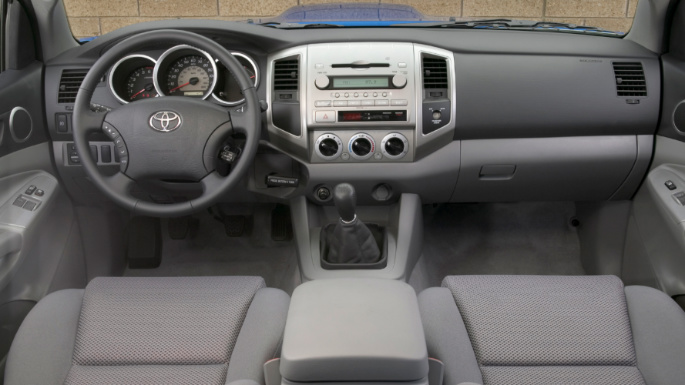 The Tacoma has many reviews raving about its practicality and reliability for its class. Kelley Blue Books notes, "When it comes to reliability in this segment, many organizations rank it at the top of its class." BusinessWeek adds to the positive review and shares, "Tacomas have such a strong reputation for quality and reliability that late-model used ones often sell for almost as much as new vehicles." Fortunately, you can find a 2007 Toyota Tacoma for an MSRP of $5,275.

This capable pickup is larger than the Ford Ranger but smaller than the Dodge Ram. Powering the Tacoma is a 159-horsepower 2.7-liter inline four-cylinder engine that pairs a manual transmission with its four-wheel-drive option and a 236-horsepower 4.0-liter V6 engine, which offers four-whee-drive with either manual or automatic transmission. Both engines feature Toyota's VVT-i technology (Variable Valve Timing with intelligence). 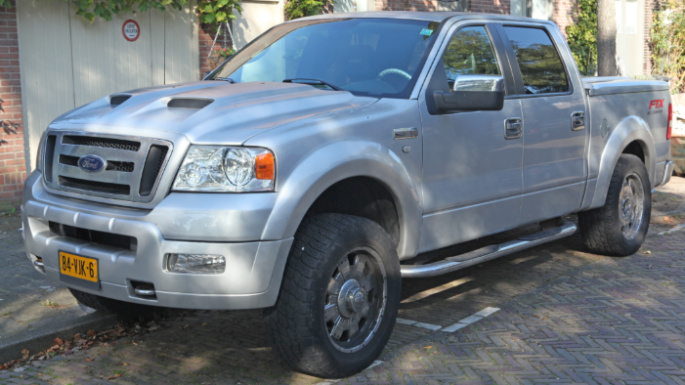 The Ford F-150 is a full-size truck that has been the best-selling pickup truck for years on end. It also makes the used car market rich with examples from the late 1990s and early 2000s. The home-grown pickup has won more than 30 awards since it introduced the 2004 model, including North American Truck of the Year. 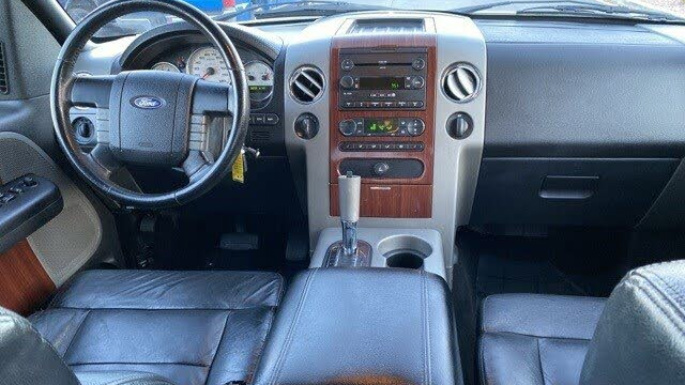 For the 2005 model year, the Ford F-150 offers the widest variety of body configurations for its era and three engine choices, including a 4.2-liter V6, a 4.6-liter V8, and a 5.4-liter V8. The best 4x4 truck in the lineup is either the XLT SuperCrew 4X4 5.4-liter V8 automatic or the FX4, a unique off-road model sharing the same engine as the XLT but with the addition of more off-road features. Both can be had around the $5,000 price range for a 2005 model.

Aftermarket support allows you to turn just about any F-150 into a street cruiser or even a more rugged off-road machine. In addition, Ford F-150 XLT and Lariat models provide enough amenities for non-tuners to enjoy some luxury features like leather seating. Setting it apart from other rivals is its impressive towing capacity of 9,900 pounds. 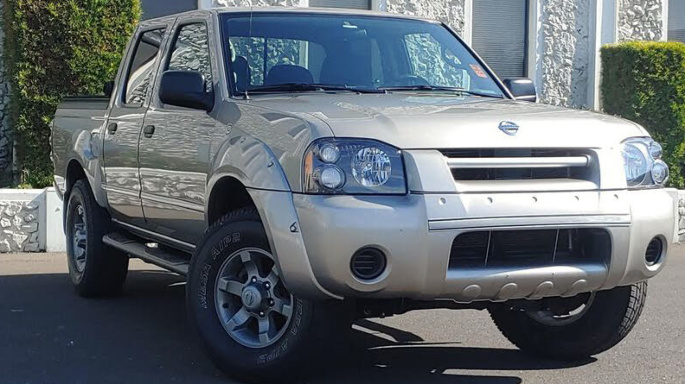 The Nissan Frontier is the Tacoma's primary used compact pickup truck rival. They are usually a little less expensive comparatively because they do not have quite the reliability record of the Tacoma. Still, early-2000s models are better known for lasting well over the 200,000-mile mark without issues. 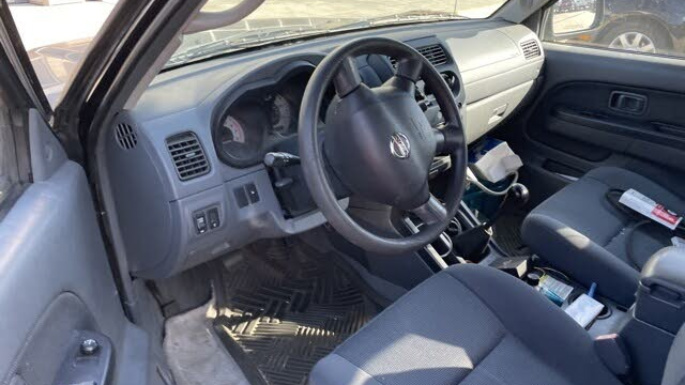 Nissan's unwillingness to update its simple design is a testament to how well it has held up over the years, but it also means that the used market is rich with decent examples around and below the $5000 mark. For that, the truck offers surprisingly good off-road capability and seating for up to five passengers. There are few trucks that offer a comparable blend of modern styling, high-tech features, and all-around versatility like the Frontier.

Engine choices include a 143-horsepower 2.4-liter four-cylinder, 180-horsepower naturally aspirated V6 and a 210-horsepower supercharged 3.3-liter V6. Four-wheel-drive is only available on the V6 trucks, while the remainder of the models offers rear-wheel-drive as standard. 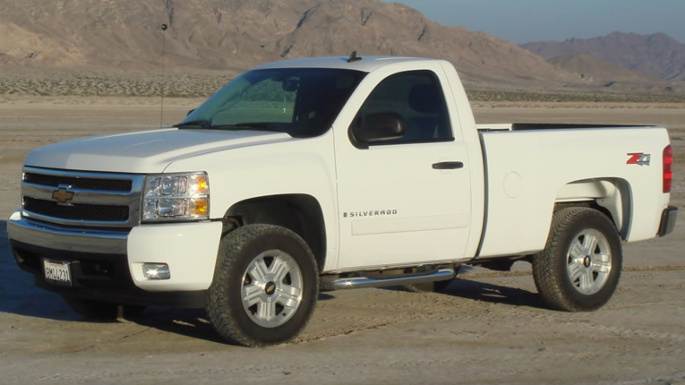 The Chevrolet Silverado 1500 is a full-size truck that was redesigned for the 2007 model year to better compete with rivals in its class. While most rivals of that decade sacrificed an outdated cabin for more work truck capability, or vice-versa, the Chevy Silverado changed its previous flaws and offered a combination of both. Its cabin features improved quality materials, while the exterior of the half-ton pickup welcomed updated styling. 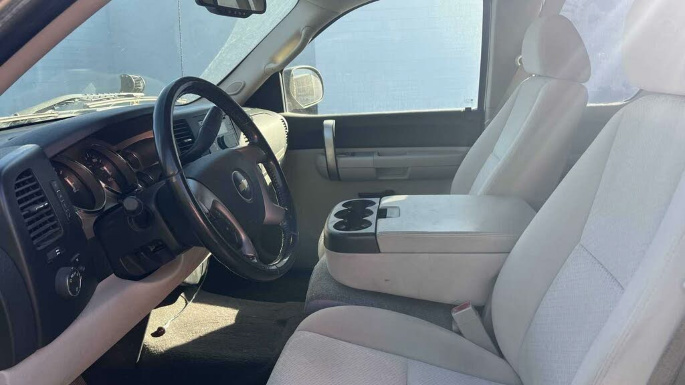 A strengthened frame and redesigned suspension contribute to the Silverado's impressive towing capacity of 10,500 pounds, which was class-leading at the time. While Chevy nailed all the significant features, the four-speed automatic transmission remained instead of the more robust six-speed units found in rivals like the Cadillac Escalade and GMC Yukon Denali. 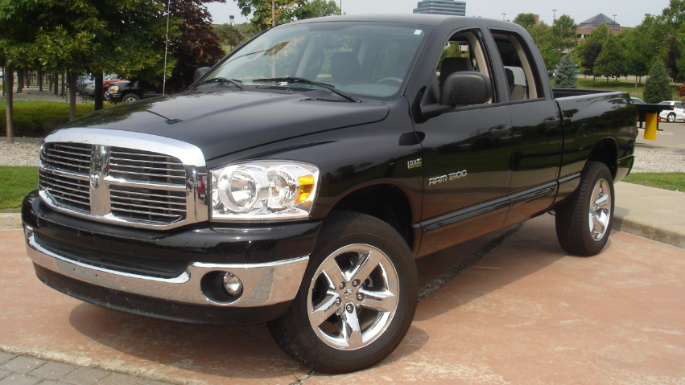 Nowadays, Ram Trucks is a separate brand consisting of trucks and commercial vehicles. However, the Dodge Ram 1500 fell completely under Dodge, its parent company. Second-generation models, model years 1994-2001, are the most plentiful and make up most of the Ram 1500s at the $5,000 price point, but some newer models can be found in excellent condition for just above $5,000, including the 2007 model year. 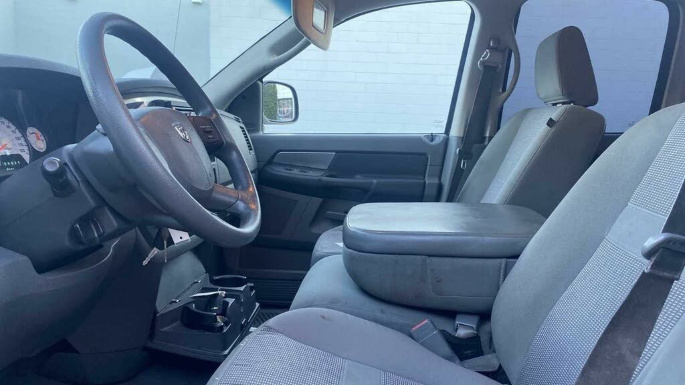 With an available 345-horsepower 5.7-liter HEMI V8 engine, the 2007 Dodge Ram 1500 is one of the most potent pickups for its class of full-size trucks. Other engines for the lineup include a 215-horsepower 3.7-liter V6 and a 235-horsepower 4.7-liter V8. Only the V8 engines are available with four-wheel-drive.

If its Hemi engines aren't enough to separate it as one of the best cheap 4X4 trucks, then its Mega Cab's cavernous and plush interior will become the crowd-pleaser, converting the pickup into a family vehicle capable of everything a work truck can do, including hauling, towing and off-roading. 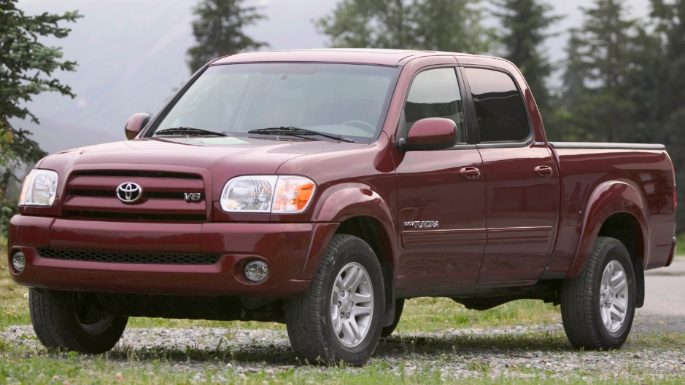 If you take everything commendable about the Toyota Tacoma and make it a little bit larger, the result is the Toyota Tundra. It is a full-size truck that is not as popular as the Ford F-150 or Chevy Silverado, but it keeps up with them, especially in terms of reliability. Because its resale value remains high, it is difficult to find one in recent years for $5,000, so you will need to do your homework to find one that isn't too old and fits just within budget. 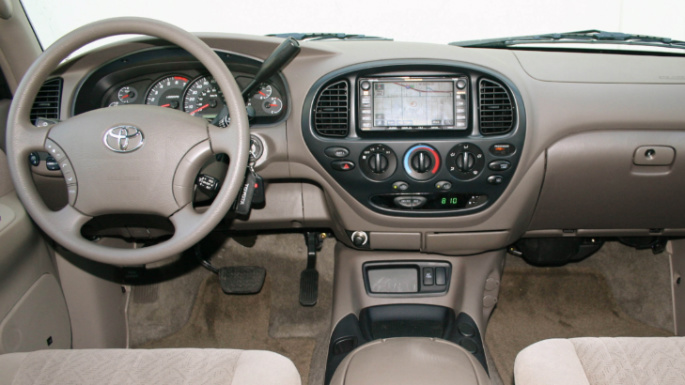 The 2005 Toyota Tundra comes close as one of the most recent years around the 5000 mark. According to Edmunds, one in outstanding condition will fetch a trade-in price at a dealership of $6,625, but you can get a clean one for $5,900 if you are lucky. The 2005 model year also addresses the previous generations' power deficit and adds more powerful engines to the lineup, including a 245-horsepower 4.0-liter V6 and a 282-horsepower 4.7-liter V8. SR5 models offer the option of two-wheel drive or four-wheel-drive; however, the standard drivetrain is rear-wheel-drive.

The Toyota Tundra is one of the lightest trucks in its class, which helps make it one of the most fuel-efficient too. Its 4WD version receives EPA ratings of 13 mpg city and 17 mpg highway. 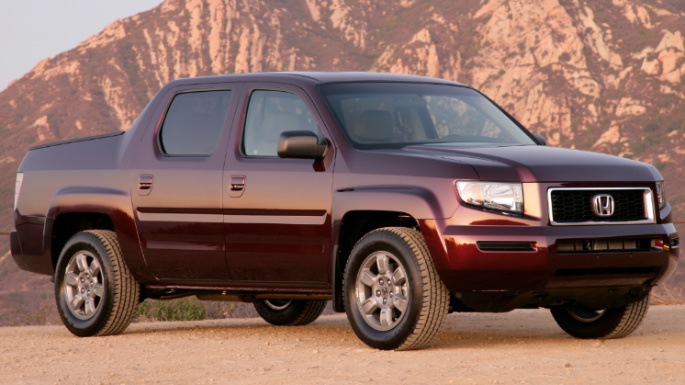 Many truck purists consider the Honda Ridgeline a lesser pickup truck than the Chevy Silverado, Dodge Ram 1500, and the Ford F-150. That's because it's built on a unibody frame, like a car or minivan, and can only tow 5,000 pounds. However, the Ridgeline was designed for those who wanted to transition from a car or minivan into a pickup truck. 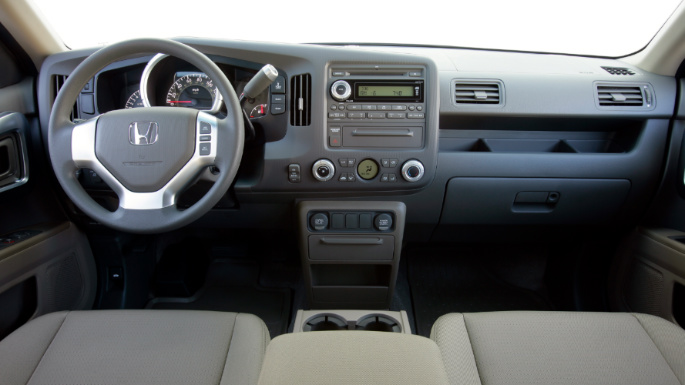 It shares its pickup truck and SUV combination body style with the Chevrolet Avalanche, making some of its capabilities less than those of both actual trucks and SUVs. It features the same Jeep Wrangler-like off-roading capability with an all-wheel-drive system that Honda calls VTM-4, which can send variable torque to the wheels that need it, as well as a locking rear differential.

Even though many traditional truck enthusiasts are not fond of the Ridgeline, it provides good ride quality, Honda reliability, and a decent fuel economy. It was also highly rated by many different reviewers when it first debuted.

The 2008 mode year is one of the most recent years that fall just below the $5,000 sticker price with its one-of-a-kind, lockable in-bed trunk, and standard four-wheel-drive. Under the hood is a 247-horsepower 3.5-liter V6 engine. 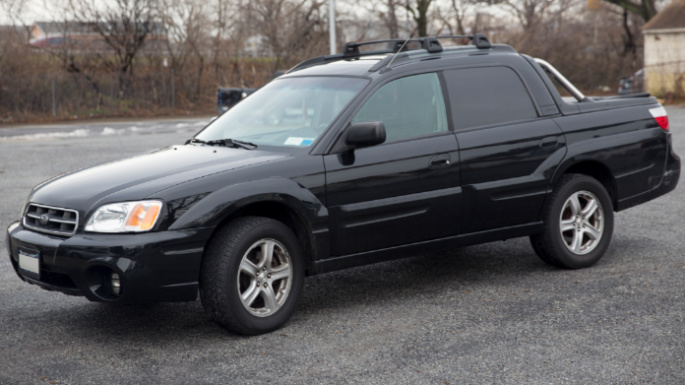 The Subaru Baja may only just make the cut for consideration as a pickup truck, but still, it definitely deserves a place as one of the cheapest 4x4 pickups available. Generally speaking, it is a car-based crew-cab pickup. It may not be a body-on-frame vehicle, but drivers benefit from Subaru's symmetrical all-wheel-drive, making off-roading a breeze in almost all conditions. 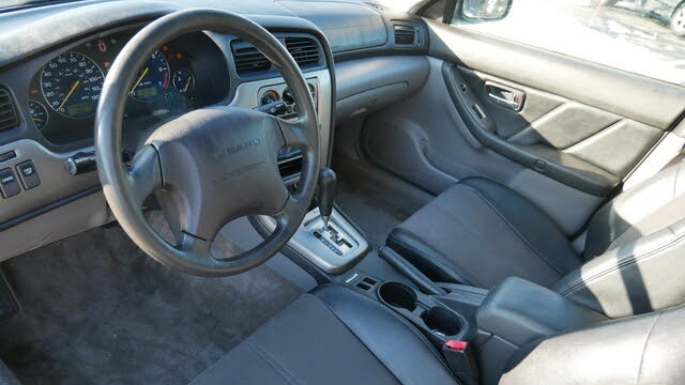 There is no locking differential system available like traditional pickups, but it offers an impressive grip on questionable surfaces with a capable and adaptive AWD system that most pickups cannot match. Under the hood is either a 165-horsepower 2.5-liter, four-cylinder engine or a Baja Turbo option that is turbocharged to produce 210-horsepower.

You could find a Subaru Baja for as low as $3,400. However, it may be a difficult task since the 2006 model year marks the last year of the iconic Baja.