SUVs With the Best Gas Mileage for 2021

SUVs and fuel-efficiency do not usually go hand-in-hand. But increased regulations concerning fuel economy have pushed automakers to marry the most popular vehicle segment to better gas mileage. Not only has the gasoline-electric hybrid SUV has become much more popular, but gasoline-powered SUVs have also risen the ranks for better fuel consumption.

It's a good thing for the consumer and the environment. Not all SUVs are lumbering leviathans anymore, as some not only use engines with as few as three cylinders, but many are also available with a hybrid powertrain, and they can be as fuel efficient as a compact car. Some don't even impose a significant price premium over a gasoline-only SUV and can save drivers money in a relatively short amount of time. Here are 12 fuel-efficient SUVs. 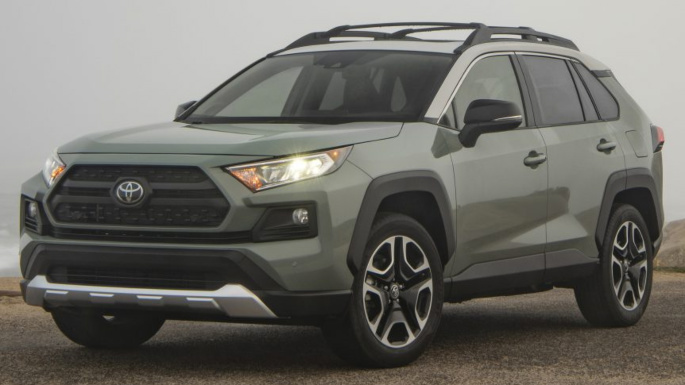 To millions of buyers, the Toyota RAV4 compact SUV is an ideal vehicle. It has tons of cargo room, a comfortable ride, an easy-to-use infotainment system, and several awards to its name. It comes standard with a 203 horsepower, 2.5-liter four-cylinder gasoline engine, and an 8-speed automatic transmission, with either front or all-wheel-drive. The hybrid model comes with two electric motors, a 2.5-liter four-cylinder engine, all-wheel-drive (AWD), and 219 total horsepower. For 2021, the new RAV4 Prime is a plug-in hybrid electric vehicle (PHEV) with 302 horsepower and an EPA-estimated 42 miles of electric-only range. 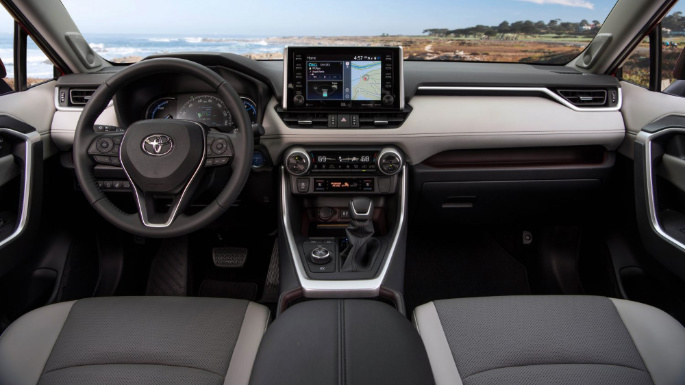 Regular RAV4 models start at just over $26,000, while RAV4 Hybrid pricing starts at $2,500 higher. Standard features on both models include a continuously variable automatic transmission (CVT), a Wi-Fi hotspot, Apple CarPlay and Android Auto connectivity, and a host of driver assistance features. 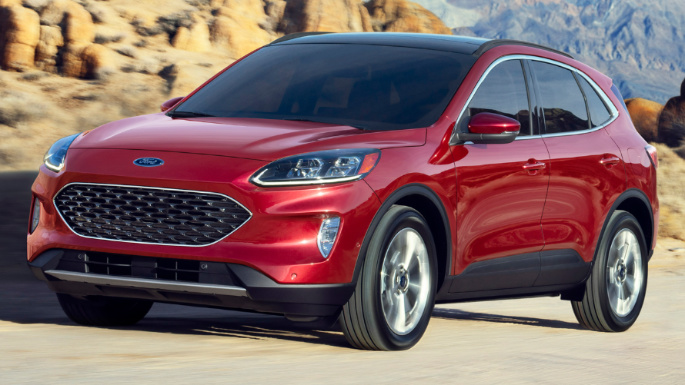 The Ford Escape was redesigned for 2020, and the Escape Hybrid made a return after an eight-year absence. Though competing in a crowded segment dominated by models like the RAV4, Honda CR-V, and Hyundai Tucson, Ford is a strong player as the Escape has been a popular SUV for 20 years. 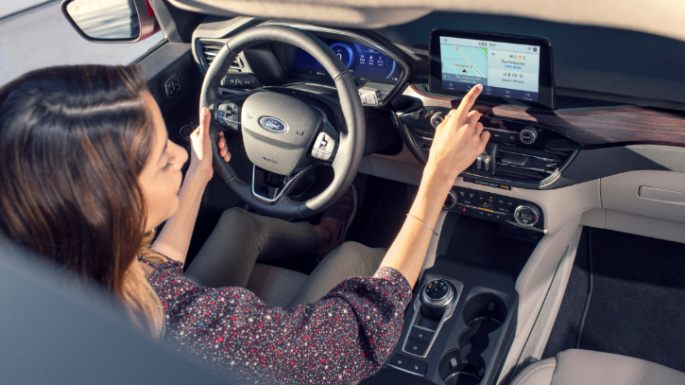 Opting for the gasoline-only Escape will cost buyers about $25,000 to start. For that price, they get a 1.5-liter turbocharged three-cylinder engine with 181 horsepower, an eight-speed automatic transmission, and a combined city/highway fuel economy rating of 31 mpg. The more powerful 250-horsepower, 2.0-liter turbo four doesn't hurt fuel economy too much in exchange for significantly improved performance, however.

The Ford Escape Hybrid starts at nearly $28,500 but comes with more standard features than the base gasoline model. An electric motor and a four-cylinder engine help the Escape hybrid achieve 200 total system horsepower, 44 mpg in the city, and 37 on the highway. A PHEV version is also expected in 2021, starting at around $34,000 before electric vehicle incentives. 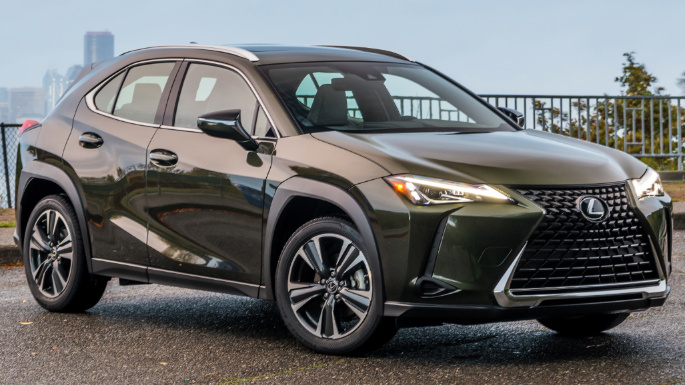 The Lexus UX and UX Hybrid are part of the ever-growing small luxury SUV segment, but both models pack a punch despite their small size. Both offer a comfortable ride, a well-appointed interior, a generous list of standard features, plentiful available driver assistance tech, and a reasonably strong reliability record. 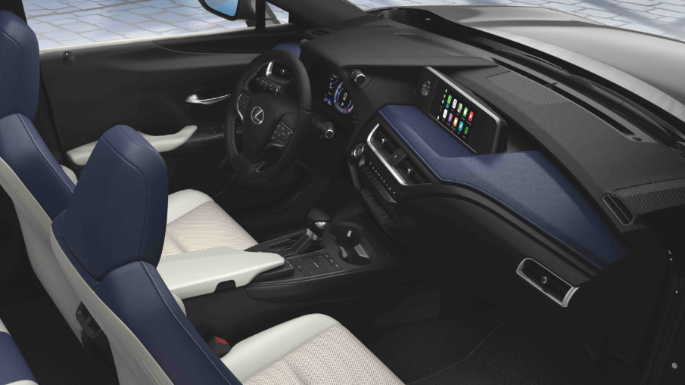 Its small size brings pluses and minuses to the equation, however. The UX's cargo capacity and performance are lacking compared to the competition, but its small size benefits its fuel economy. The gasoline-only UX 200 returns EPA estimates of 29 mpg in the city and 37 mpg on the highway with its 168-horsepower 2.0-liter four-cylinder engine and standard front-wheel-drive (AWD is optional). The UX 250h hybrid one-ups the gasoline version by getting 42 mpg and offers more power (181 horsepower) and standard all-wheel-drive. But every UX lacks the power of similarly priced rivals like the Volvo XC40 and BMW X1.

Both models send power to the wheels through a continuously variable automatic transmission (CVT), which exacerbates the sound coming from the hard-working engines. The hybrid comes standard with all-wheel drive from its four-cylinder engine working with two electric motors. Pricing starts at around $33,000 for the UX 200 and just over $35,000 for the UX 250h hybrid. 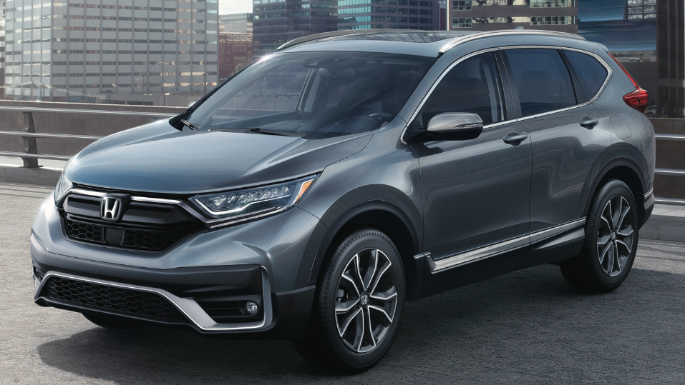 Honda is known for its practical and reliable vehicle across the board. The CR-V is well-known as one of the most practical choices in a segment full of versatile vehicles. It has one of the largest cargo spaces in its class, has a comfortable and spacious interior, and aggressive pricing makes it a good value. 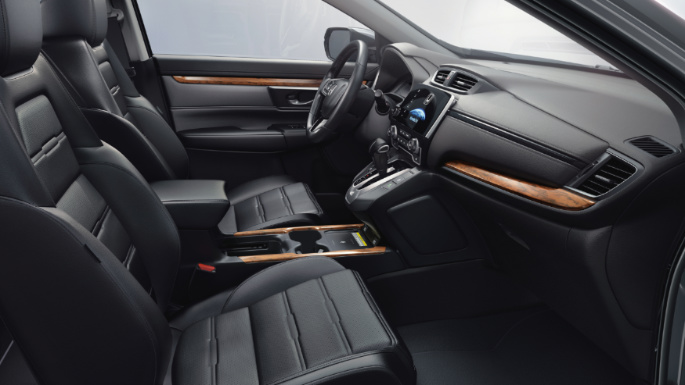 The 2021 CR-V comes in hybrid and non-hybrid versions, with both models returning excellent fuel economy estimates. Gasoline-only versions return 31 combined miles per gallon, while hybrid models get 40 miles per gallon in the city and 35 on the highway. Even though the hybrid's EPA estimates are not as good as many competitors, the total CR-V package remains excellent.

Just under $25,500 will get buyers into a front-wheel-drive CR-V with a 190 horsepower four-cylinder engine. An extra $5,000 will put buyers into a CR-V hybrid model with standard all-wheel drive, two electric motors, 212 horsepower, and a CVT transmission which is also standard all trim levels regardless of powertrain selection. 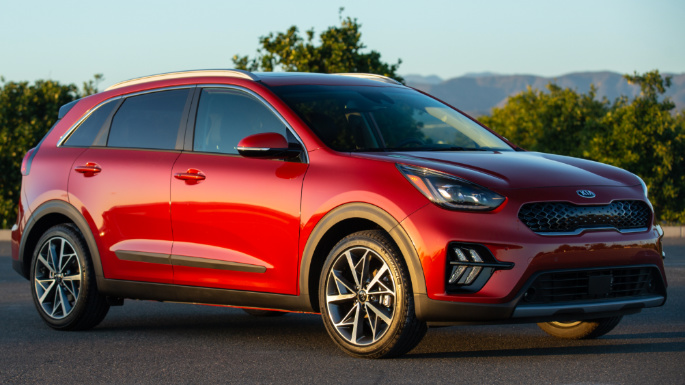 The Kia Niro stretches the definition of an SUV. While it offers much of the practicality of models like the CR-V and Escape, it lacks an all-wheel-drive option and doesn't have much more ground clearance than a standard hatchback. However, the Niro achieves impressive fuel economy figures: 53 mpg in the city and 48 miles per gallon on the highway. A plug-in hybrid version is also available with up to 26 miles of range. 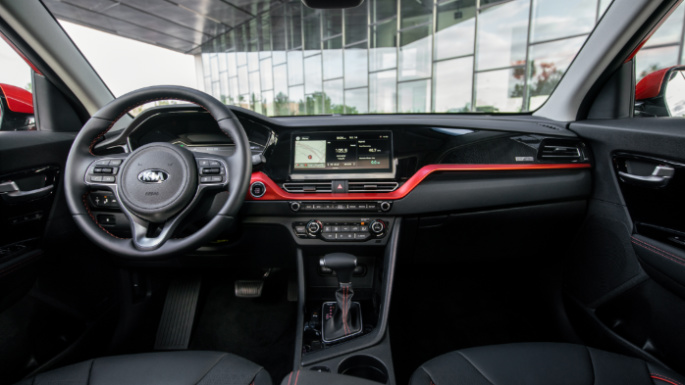 Niro hybrid and PHEV models get a 1.6-liter gasoline engine and an electric motor producing a total system output of 139 horsepower. That is relatively low compared to other models, but its quick-shifting six-speed dual-clutch automated transmission helps make it feel a little quicker than it is. Its relatively agile handling also makes up for its lack of outright speed.

Another party piece the Kia brings is its low starting MSRP of $24,650 (the PHEV is about $5,000 more to start). While interior materials won't give off the impression of luxury, standard features like Apple CarPlay and Android Auto connectivity, an 8-inch touchscreen display, dual-zone climate control, and an array of driver assistance technologies help make up for it. 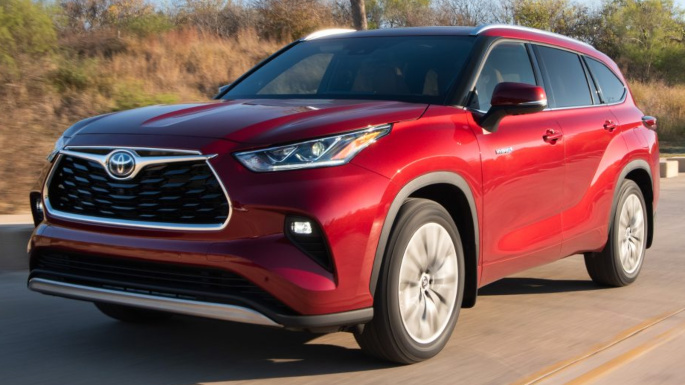 Buyers who need a three-row midsize SUV and also seek good fuel economy have an excellent choice. The Toyota Highlander Hybrid offers seats for up to eight passengers with a standard third row and provides a large cargo area with the seats folded down. 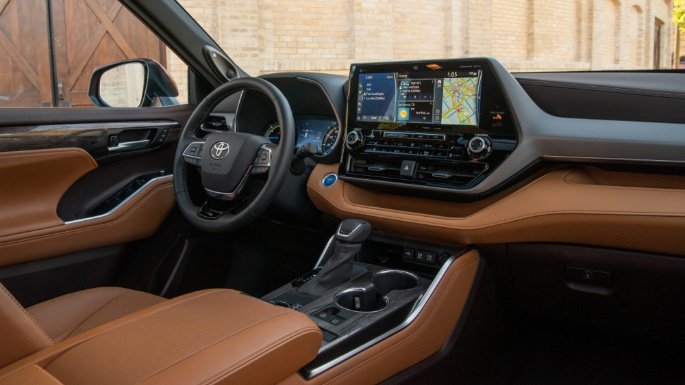 As expected, EPA estimates of 36 mpg city and 35 mpg highway are slightly lower than that of smaller SUVs. But a high-quality interior with standard Apple CarPlay and Android Auto connectivity, an 8-inch infotainment touchscreen display, a Wi-Fi hotspot, adaptive cruise control, automatic emergency braking, and lane-keeping assist keep the Highlander Hybrid in the running and put it ahead of other three-row SUVs. 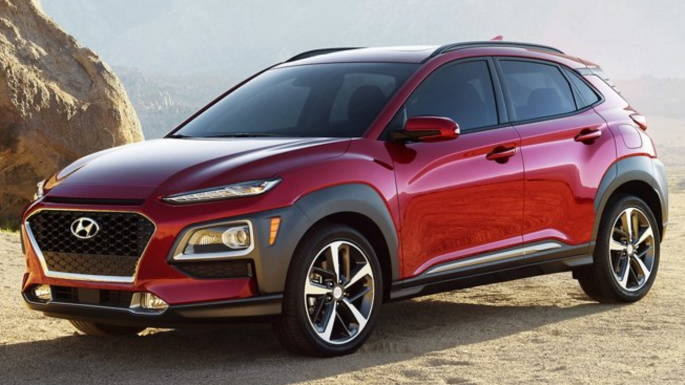 Combine a low starting MSRP of around $20,500, 19.2 cubic feet of cargo space, a classy interior, and a solid list of standard features, and you get the Hyundai Kona. The subcompact crossover SUV falls short of competitors in overall cargo and passenger space, but those are comparatively minor drawbacks given all that it does offer. 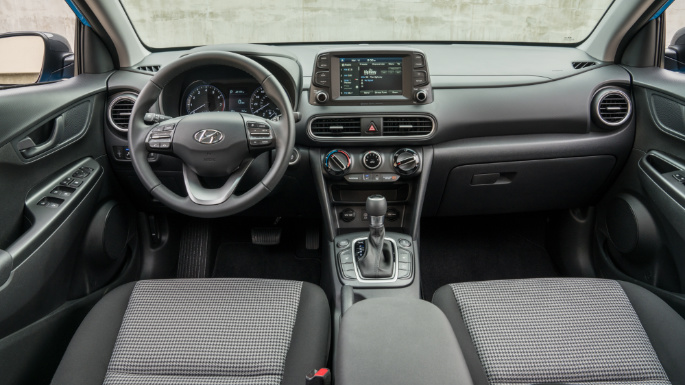 Its standard powertrain is a 2.0-liter four-cylinder engine and a six-speed automatic transmission, sending power to the front wheels. For more performance, a 1.6-liter turbocharged engine is available with 175 horsepower. All-wheel drive is also optional.

That base engine produces EPA estimates of 27 mpg in the city and 33 mpg on the highway. But the optional turbo engine brings city gas mileage up by 1 mpg, although highway mileage drops by the same amount. Still, the Kona's low price and pleasing design and driving characteristics add to its appeal. 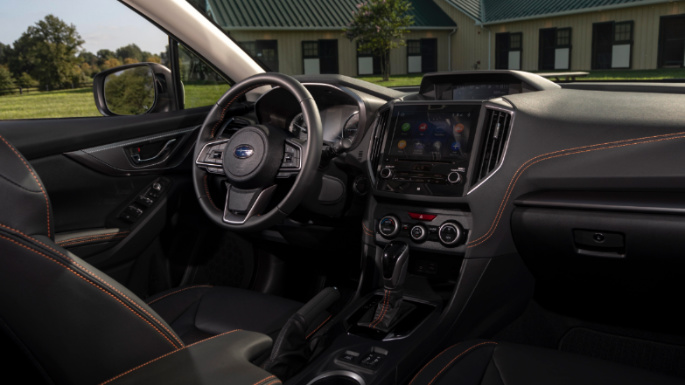 The small Subaru Crosstrek is faithful to the brand's commitment to rugged, simple vehicles. Its standard all-wheel-drive system provides some off-road capability that many other SUVs lack while not severely hurting wallets at the pump. The standard Crosstrek even comes standard with a six-speed manual transmission, a rarity among all new vehicles in 2021. 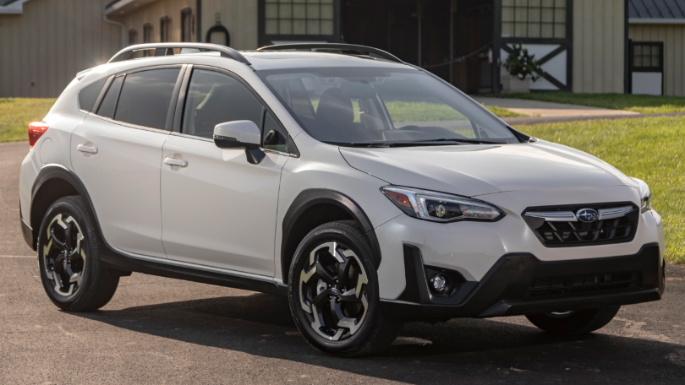 Base gasoline-only models, starting around $22,300, come with a 2.0-liter four-cylinder producing 152 horsepower. Limited and new-for-2021 Sport trim levels get a newly available 2.5-liter engine with 182 horsepower. And the Crosstrek Hybrid, starting at $35,145, uses the 2.0-liter engine and two electric motors for a total output of 148 horsepower. And as a plug-in hybrid, it can run on electric power only for up to 17 miles.

The most fuel-efficient Crosstrek achieves 28 mpg city and 33 on the highway. Opting for the PHEV nets a 35 mpg combined rating. 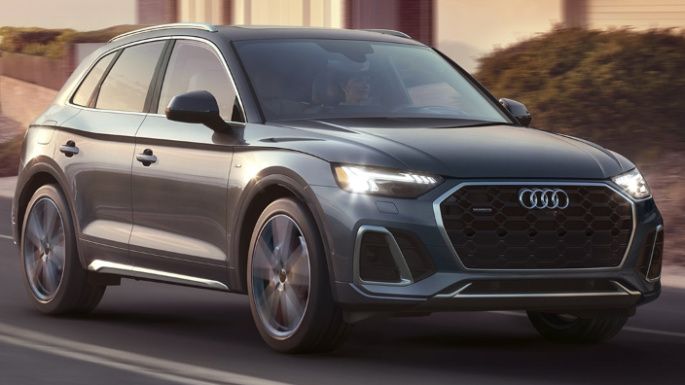 Buyers who want an efficient SUV with a bit of luxury will likely find that the Audi Q5 55 TFSI e plug-in hybrid will hit the spot. It strikes a balance of luxury, comfort, and performance for around $53,000 before incentives. A styling and infotainment system upgrade for 2021 has helped keep the Q5 fresh. 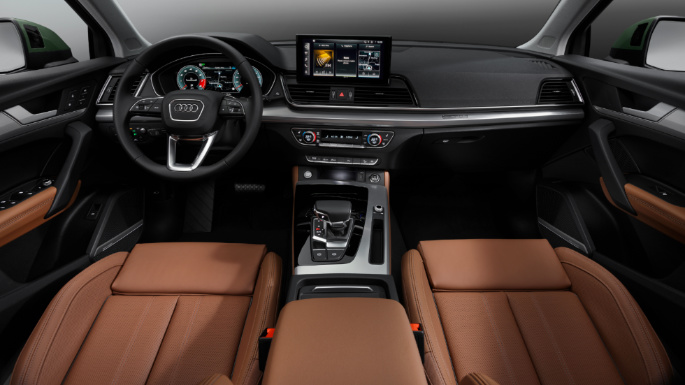 Power goes to all four wheels with Audi's Quattro all-wheel-drive system. A 2.0-liter turbocharged engine and an electric motor team up to produce 362 horsepower and a seven-speed dual-clutch automatic transmission complete the powertrain setup. An all-electric range of 19 miles and a combined city/highway estimate of 27 mpg in hybrid mode aren't outstanding compared to the likes of the Volvo XC90 Recharge PHEV, but they're better than the gas-only models.

Standard features include a digital instrument panel, Apple CarPlay and Android Auto, rear cross-traffic alert, automatic emergency braking, and lane departure warning. As a bonus, the battery pack does not eat up any valuable cargo space, which can't be said for every model on this list. It adds to the luxuriousness and livability of the Q5. 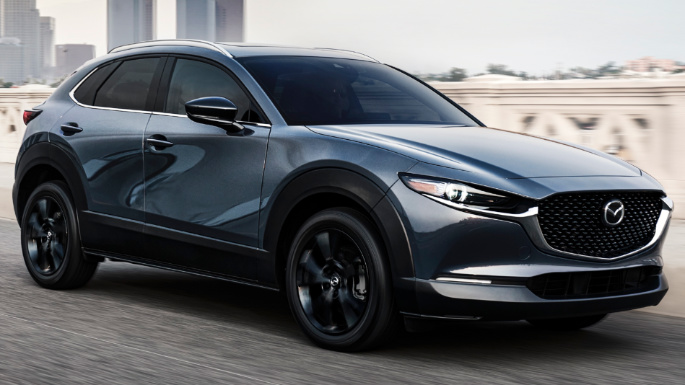 Mazda has a reputation for making cars that are fun to drive without pumping gobs of power into their engines. That allows for more driving pleasure while also conserving fuel and money at the gas pump. The CX-30 continues that tradition by returning EPA estimates of 25 mpg in the city and 33 highway. 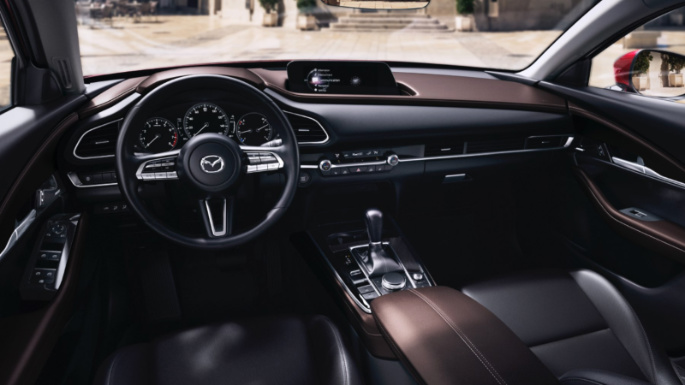 This small SUV produces a class-leading 186 horsepower from its four-cylinder engine, sending its power through a six-speed automatic transmission and to the front wheels. All-wheel-drive is optional with this engine but standard on the newly available 250-horsepower turbocharged model.

The downside of the CX-30 is its relatively small cargo capacity and passenger space compared to competitors. However, it's made up for by its extensive list of standard driver-assist technology, its lengthy standard features list, its affordable starting price of about $22,000, and its classy interior. 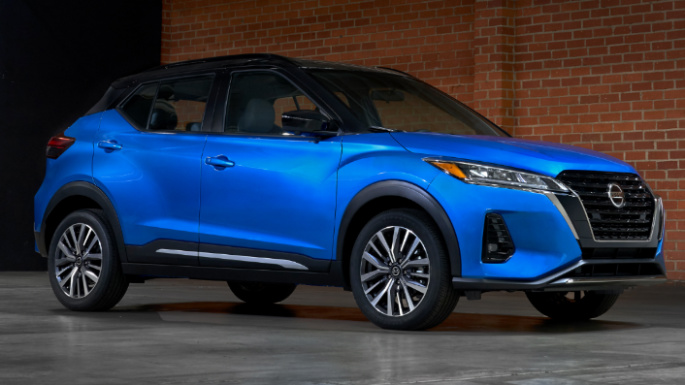 The Nissan Kicks is designed to cater to the younger vehicle buyer. It offers thousands of customizable color combinations, a sub-$20,000 starting MSRP, Apple CarPlay and Android Auto connectivity as standard features, and over 25 cubic feet of cargo space. 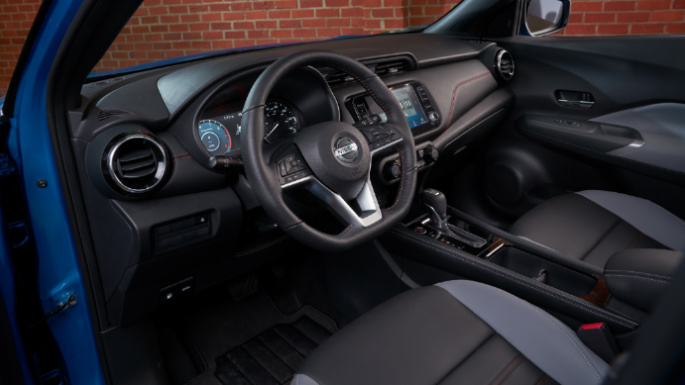 A four-cylinder engine produces 122 horsepower through a continuously-variable transmission, but a front-wheel-drive is the only drivetrain option. Its small size and CVT work together to deliver 31 mpg in the city and 36 on the highway, better fuel economy ratings than many other non-hybrid SUVs.

The Kicks will not set any land speed or acceleration records, but it will satisfy just about anyone's around-town needs regarding overall practicality, standard tech features, and ample second-row passenger room. And that makes it not only a vehicle for young drivers but drivers of any age who want a practical and efficient SUV that's also an excellent value. 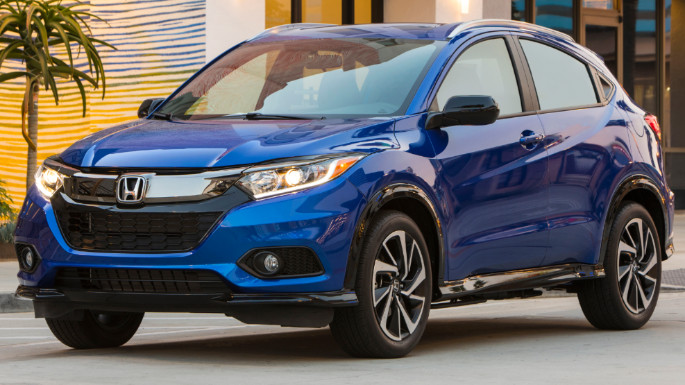 The Honda HR-V is designed to follow in the CR-V's larger footsteps. It makes the most out of its small size by offering up to 24.3 cubic feet of cargo space with the rear seats up, putting it near the top of the segment. Honda's second-row Magic Seat increases practicality even more. In addition to cargo space, passengers are treated to a roomy, comfortable interior. 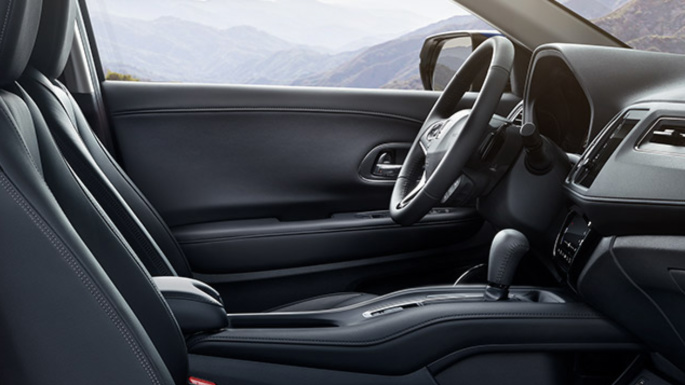 Power comes from a 141 horsepower 1.8-liter four-cylinder engine. It makes adequate power with the CVT, the only transmission choice. Front-wheel-drive comes standard, and all-wheel-drive is optional. EPA fuel economy estimates are as high as 28 mpg in the city and 34 mpg on the highway.

Pricing starts at around $21,000, but it has fewer standard features than several others in the class. Still, the HR-V has performed well in crash tests with high ratings, and it's an efficient and practical package.