2020 pushed many consumers to become more budget-conscious, so it's likely you're exploring ways to cut car costs and your gas bill at the same time. If this is the case, owning a fuel-efficient hybrid should be at the top of your list.

A hybrid car uses a combination of a gasoline engine and an electric motor to get the most out of every gallon of gas used. They are fuel-efficient and great for the environment.

The best part is that there's a wide variety of good used hybrid cars on the market.

To help you stretch your dollars even further, we have put together a list of used hybrid cars under $10,000 to help make your decision a little easier. 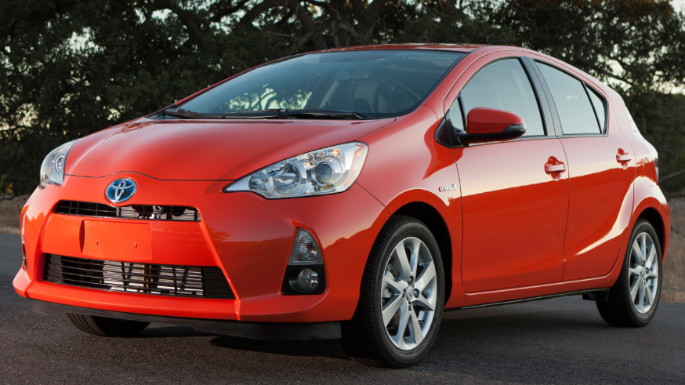 Toyota's legendary Prius was the first mass-produced hybrid car. This compact hatchback has a four-cylinder engine and an electric motor that together produce 134 horsepower and an exceptional fuel economy of 49/46 mpg city/highway. Matched with high reliability scores and good safety ratings, it is easy to understand why it's considered one of the best used hybrids today. 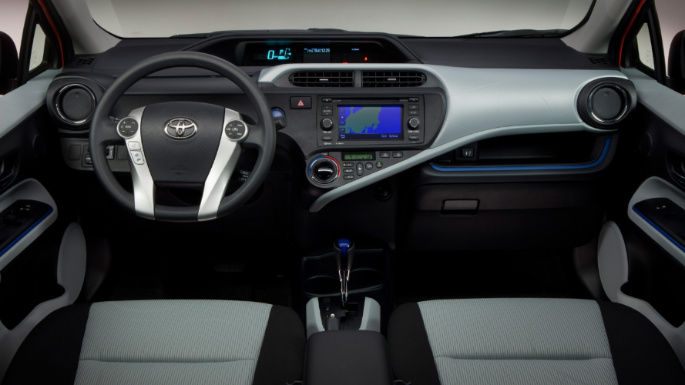 The five-seater Prius is comfortable and offers a roomy 21.6 cubic feet of cargo space when the rear seats are upright. All 2013 Prius models come standard with a touchscreen infotainment system, Bluetooth, and USB. Several packages, such as the Advanced Technology Package, can be added if you are looking for additional technology and safety features, including a backup camera and adaptive cruise control.

At below the $10,000 price range, this used hybrid will take you comfortably from one place to another, but it is not as quick as its competitors in its class like the 2013 Ford C-Max Hybrid. 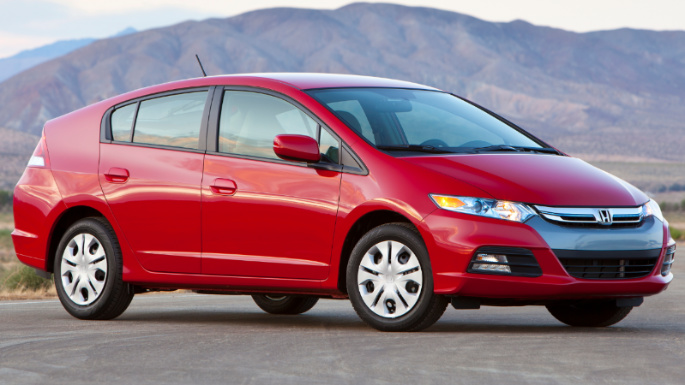 Following the production of the Toyota Prius was the Honda Insight, which was launched in 1999 in Japan and the United States. The brand offers several appealing hybrid options, including the most versatile of all its models - the 2013 5-door hatchback Honda Insight.

The 2013 Honda Insight has advanced powertrain technology paired with a continuously variable transmission (CVT). The Insight is powered by a 1.3-liter four-cylinder engine and an electric motor, which together produce 98 horsepower. 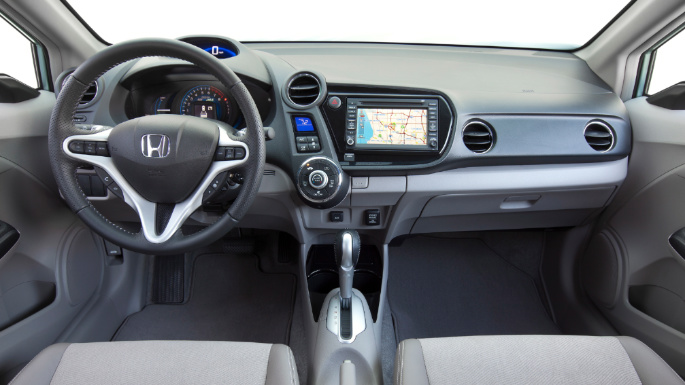 It has a great fuel economy with an EPA-estimated 41/44 mpg city/highway. The Insight also has a push-button start feature that helps conserve fuel because it shuts down the engine when the car stops.

Many reviewers praise the Honda Insight for its athletic handling, communicative steering, and body control, especially against rival hybrids in its class. Its contemporary design offers comfort, which is enhanced by standard features such as automatic climate control. 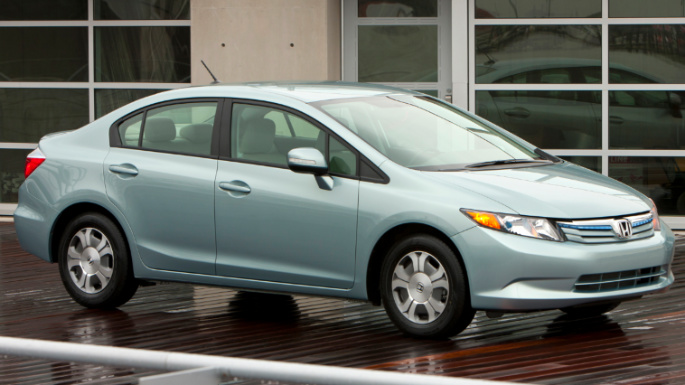 The 2012 Hybrid Honda Civic is backed by the typical reliability standards you can expect from Honda, and just like the gas Honda Civic, the Hybrid is comfortable and fun to drive. Plus, the hybrid model gets 44 mpg combined fuel economy. 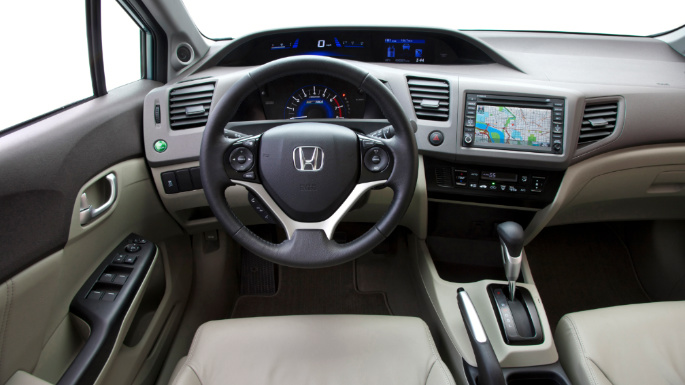 The 5-seater compact car comes standard with front-wheel-drive (FWD) and an automatic gearbox, paired with a four-cylinder engine and an electric motor. The 110-horsepower output may seem minimal, but it is adequate for daily driving and gets an EPA-estimate of 44/44 mpg city/highway. The spacious cabin and comfortable ride will surely distract you from the lower speed offerings.

You will be able to find used 2012 Honda Civic Hybrids below $10,000 with the base model offering a six-speaker audio system, USB port, power windows, and Honda's 5-inch i-MID audio display screen. Other available features include a voice-controlled navigation system and heated front seats. 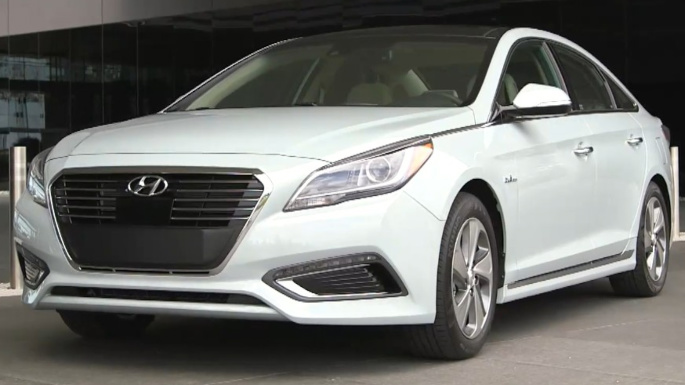 If you are looking for a practical mid-size sedan with a solid safety rating, loads of interior space, good warranty coverage, and the fuel benefits of a hybrid, then a 2016 Hyundai Sonata Hybrid would be a great option.

The Hyundai Sonata Hybrid is still a relatively new entrant in the market of hybrid cars, especially under the $10,000 price range, so you'll likely have to find one with quite a few miles on it. 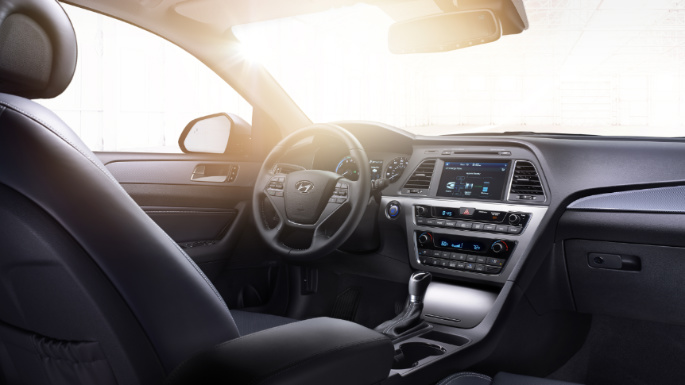 Both the Hyundai Sonata Hybrid and the Sonata Plug-in Hybrid are available in three trim levels, with the Limited trim offering leather seats with unique stitching.

The 2016 Sonata Hybrid has a four-cylinder engine and an electric motor that together produce 193 horsepower. The six-speed automatic transmission is standard and shifts smoothly. The shift from gasoline power to electric is also seamless and highly responsive. The gas mileage is in line with its rival hybrid counterparts and gets an EPA-estimated 38/41 mpg city/highway. 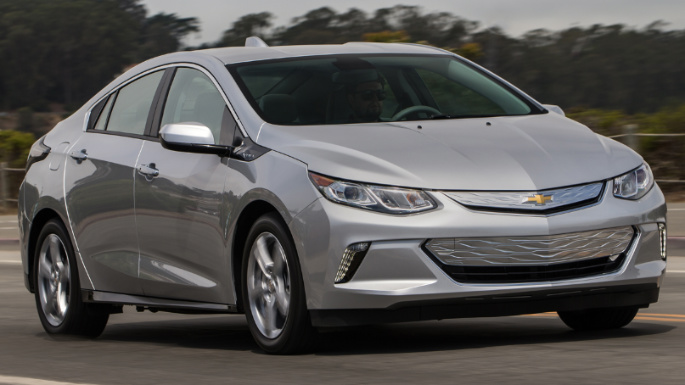 The 2016 Chevrolet Volt is a plug-in hybrid that offers many of the benefits of an electric vehicle but without the fear of running out of electric power. You can charge the Chevrolet Volt if you want to drive on electricity alone. Thereafter, it works like a normal hybrid car that uses a combination of an electric motor and a gasoline engine. 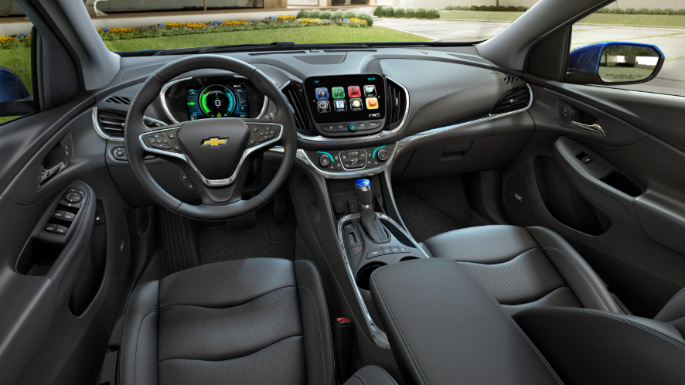 The 2016 Volt has a battery pack and two electric motors that produce 149 horsepower together for the hybrid car. Once the battery is depleted, a four-cylinder gas engine with 101-horsepower kicks in to help charge the battery and occasionally propel the car. The Volt has an all-electric range of 53 miles, which is a longer range than many other plug-in hybrids offer. When running on gasoline alone, the Volt gets a combined 42 mpg.

The Chevrolet Volt is one of the best used hybrids under $10,000 thanks to its excellent all-electric driving range, sporty handling, refined cabin, and great safety scores. The Volt also boasts excellent brakes for a hybrid in its class. 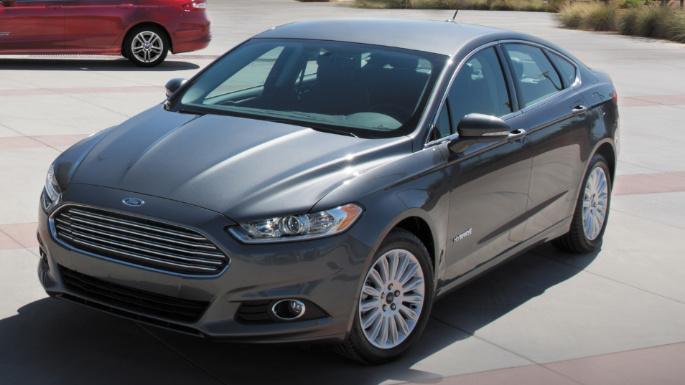 The 2016 Ford Fusion Hybrid stands out as one of the best used hybrid cars under 10000 because of its smooth powertrain, athletic handling, and contemporary interior that is comfortable and spacious. The option of the plug-in hybrid version is the Ford Fusion Energi, which gives you 20 miles on all-electric power before changing over to the gas engine. 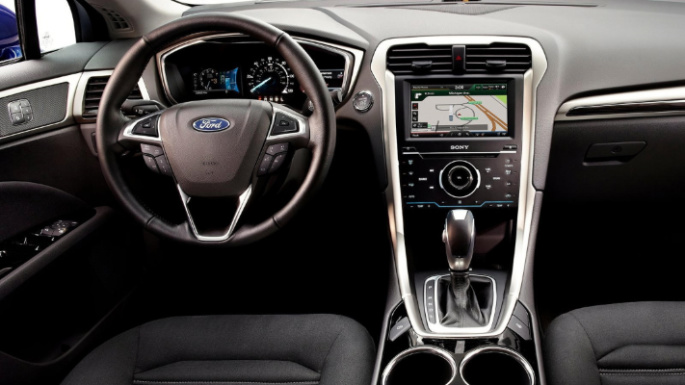 The 2016 Fusion Hybrid has an electric motor and a four-cylinder engine that together produce 188 horsepower. A CVT powers the powertrain, and the transition between electric and gas is seamless. While it handles highways well, this mid-size sedan hybrid is better suited for local driving. It earns an EPA-estimated 43/39 mpg city/highway, which is great fuel efficiency among its rival hybrids. 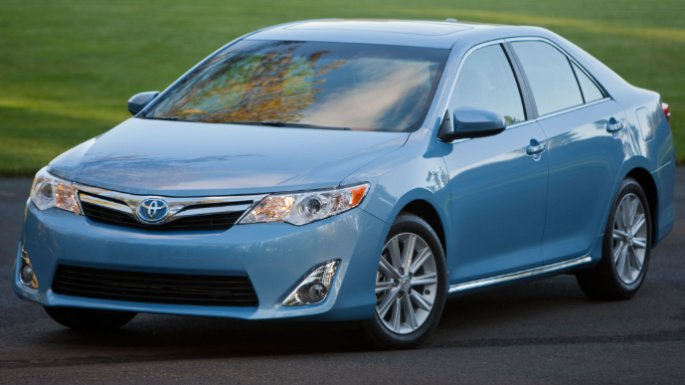 If you want to drive a hybrid car with great fuel economy but still want to feel like you are driving a normal family sedan that is quiet, reliable, and spacious, then a Toyota Camry Hybrid is a great choice.

The 2015 Toyota Camry Hybrid has a competitive powertrain that generates more horsepower than its rivals like the Ford Fusion Hybrid. The 2015 Camry Hybrid has a four-cylinder engine and an electric motor that together produce 200 horsepower. The transition is smooth from electric to gasoline power, and this hybrid sedan is not shy to accelerate quickly with its offering of ample power for all driving conditions. 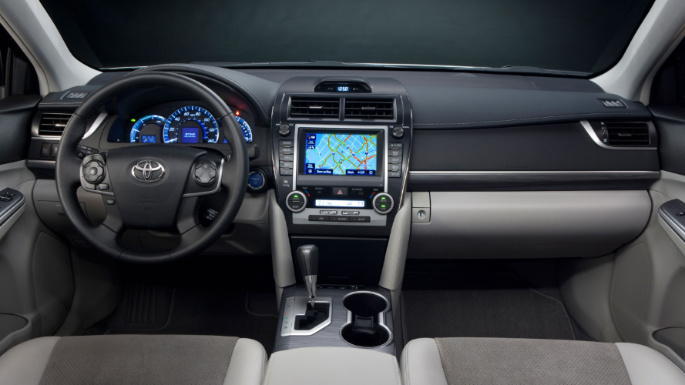 Standard features include a rearview camera, satellite radio, proximity keyless entry, and a push-button start. You can also opt for available features, such as the sunroof and upgraded Entune system with navigation. 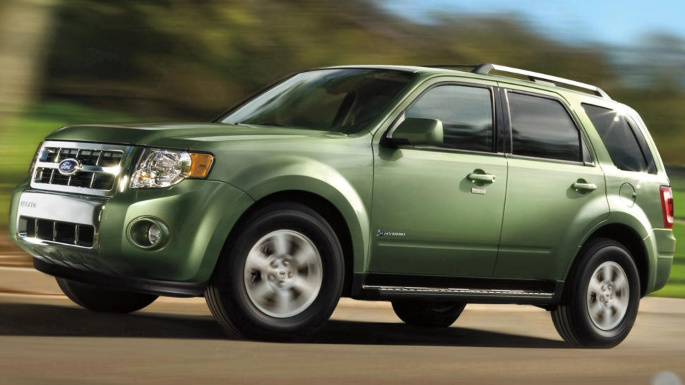 While it's no minivan, the 2012 Ford Escape Hybrid does offer more than enough room for the whole family. The best part about this used hybrid car is that you do not have to give up light off-roading or versatility for the sake of going green. The 2012 Escape Hybrid is a compact SUV with all the benefits of a hybrid car, and it has a much lower price tag than many rivals.

CVT and FWD come standard with the 2012 Ford Escape Hybrid; however, there is the option of an AWD (all-wheel-drive) model. Seating five people, the Escape Hybrid is powered by a four-cylinder engine and an electric motor which combine to produce 177-horsepower. 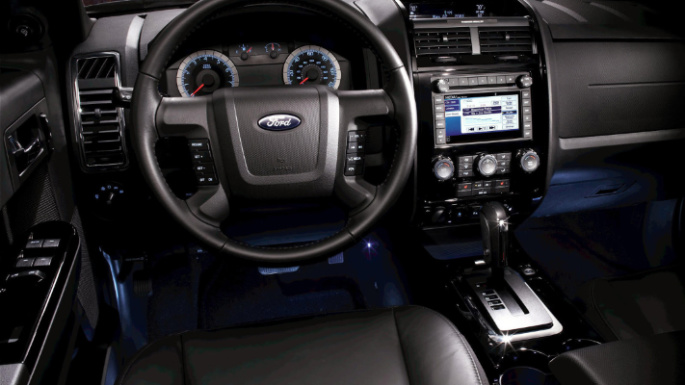 While you get to enjoy the benefits of an SUV with plenty of legroom and headroom, you get the hybrid benefits of a great fuel economy. You will get up 34/31 mpg city/highway, which is excellent for a compact SUV in its class.

For less than $10,000, you will get some great standard features, including dual-zone climate control Ford's voice-activated SYNC system. 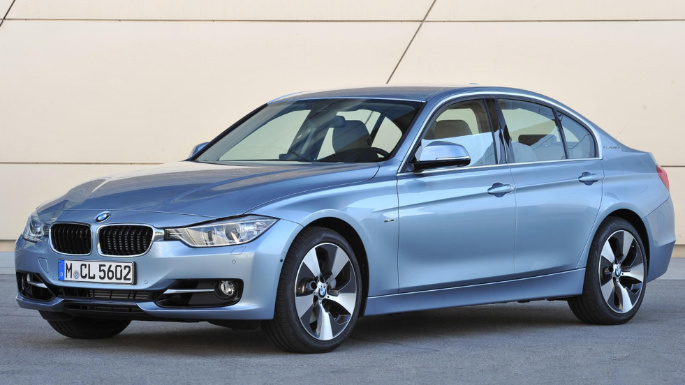 The 2014 BMW 3-Series Hybrid offers the great handling and dynamics that you would expect from the BMW brand. This luxury hybrid sports sedan makes its way onto our list of best used hybrid cars under $10,000 thanks to its powerful acceleration, excellent safety features, spacious cabin, and turbocharged engine.

The 3-Series hybrid sits in a league of its own with its six-cylinder TwinPower turbocharged engine and electric motor, which combined produce 335 horsepower. This 3-Series can accelerate up to 45 mph on just electric power alone for up to 2.5 miles. 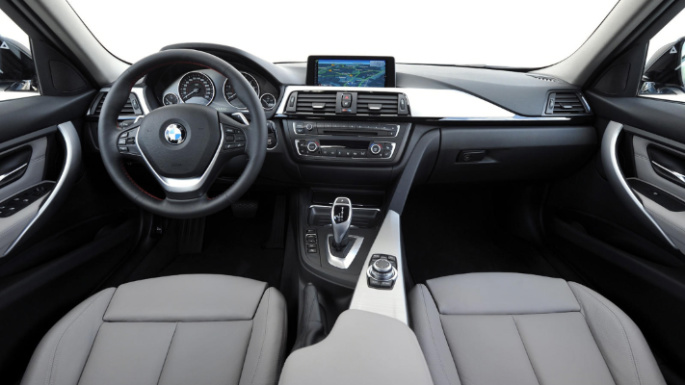 As you can imagine, with more of an emphasis on its driving characteristics, the fuel efficiency is not great given that it's a hybrid. The 3-Series Hybrid gets an EPA estimate of 25/32 mpg city/highway.

Offsetting the less-than-stellar fuel economy are the standard features, which include a moonroof, HD radio, iDrive infotainment system, and dual-zone climate control. 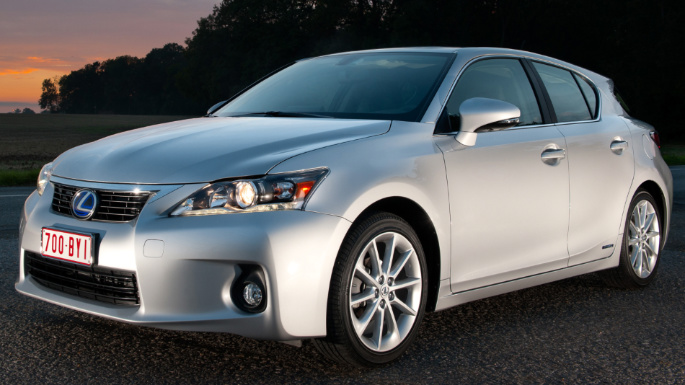 If you are looking for a luxury hatchback without the expense of a big fuel bill, then the 2012 Lexus CT 200h is definitely worth looking at. Falling just below the $10,000 price range, you will enjoy the luxury and reliability of the Lexus brand and the fuel economy of a hybrid car.

Powered by a four-cylinder engine and an electric motor, the CT 200h has a total output of 134-horsepower. 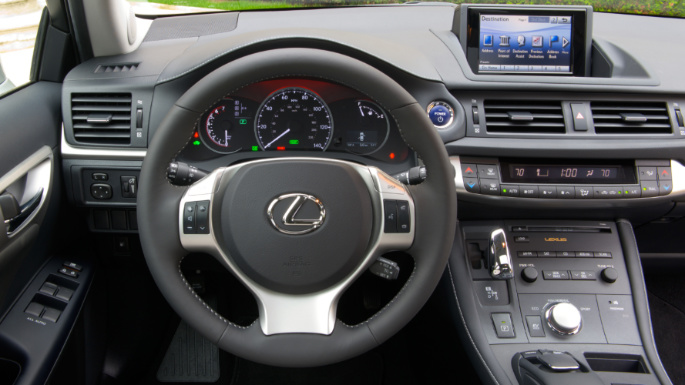 The hybrid gas-electric powertrain was taken from the Toyota Prius, while it shares the same overall length as the Audi A3 wagon. In fact, its profile from all angles looks very similar to the body style of the Audi.

While its acceleration is a little slow, it definitely impresses with its sporty handling and great fuel economy, which has an EPA-estimate of 43/40 mpg city/highway.

Standard features include leather seats, proximity keyless entry, and a push-button start. If you choose the CT 200h F Sport, then you will enjoy 17-inch alloy wheels, a big rear spoiler, and firmer shocks.