With environmental concerns and the price of gas rising, hybrid vehicles are more popular than ever before. With their fuel-efficient powertrains and low-maintenance operation, buying a hybrid is a great, socially responsible financial decision. While hybrids may have been more expensive when they first hit the market, their price has steadily come down and this is even more true for older models.

The more advanced technology behind hybrid batteries means that they are able to last longer and give better performance, even at higher mileage. Because of this, a used hybrid car can still have many years ahead of it and offer you reliable performance in the process.

Knowing about some of the best used hybrid vehicles available for under $5,000 can help you make the right choice and save some money in the short term and long term. 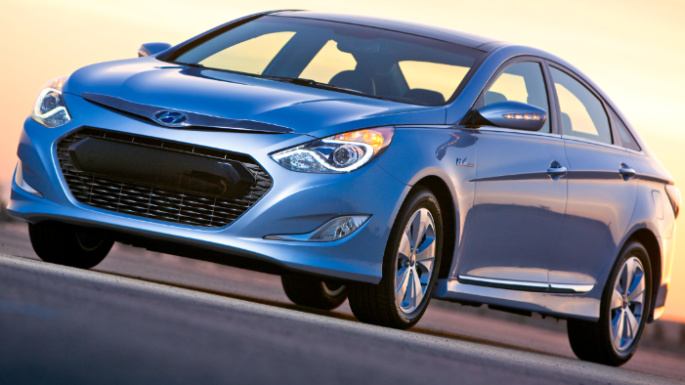 The Hyundai Sonata is a family sedan with distinctive styling and a roomy interior that comes in a hybrid version for people who want to save a little money and help the environment. The suspension on the Sonata is well-known for being incredibly well-balanced and responsive with tight steering feel that is perfect for city driving. The 2.4-liter four-cylinder gas engine is combined with an electric motor for a total output of 206 horsepower and 193 pound-feet of torque and it gets an EPA-estimated 38 combined MPG. 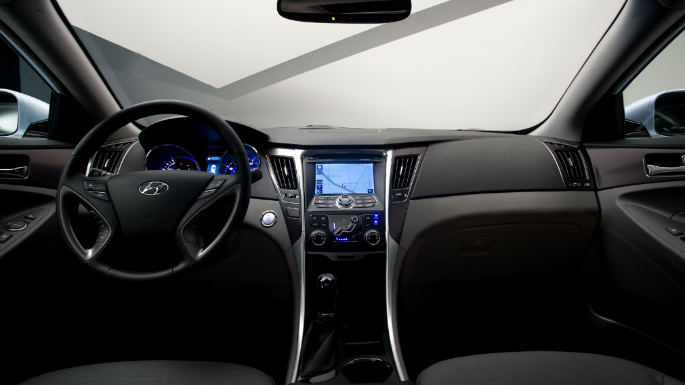 One of the major benefits of the Sonata Hybrid is its suite of safety features. These include traction and stability control, full-length side curtain airbags, and antilock brakes. The Sonata also has a top-five rating for crash protection as well as a top safety rating from the Insurance Institute for Highway Safety. The interior is roomy and stylish with a 7-inch touchscreen display that controls all the navigation and phone connectivity functions. The back seat is also big enough to seat three people, albeit with a little bit of cramping. 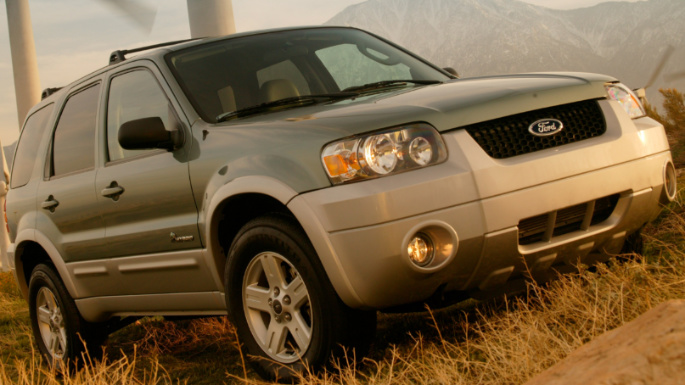 For those looking for a little bit more cargo capacity and capability in off-road situations, the Ford Escape Hybrid is a fantastic choice that is available for under $5,000. This all-wheel-drive small SUV is a budget-friendly alternative to some of the larger crossovers that feature some of the same specs. 2005 was the year Ford replaced the smaller gas engine with a 2.3-liter four-cylinder putting out 153 horsepower. The AWD system is electronically controlled and incredibly capable for such a small, unassuming vehicle. 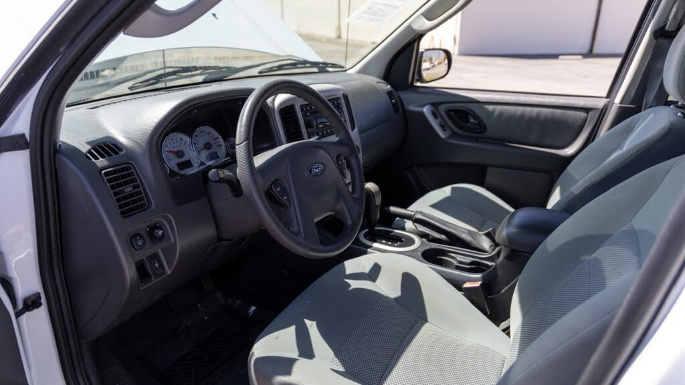 2005 also saw the addition of the Safety Canopy System, which offers additional protection in the event of a rollover crash. It was also improved in the way of frontal impact protection, making it a safe option for people who are concerned about the lightweight body style. The back seat of the Escape Hybrid also featured full three-point seat belts, which is an excellent feature that isn’t available in every two-row SUV. If you are looking for safety and fuel economy, the Escape Hybrid could be an excellent choice. 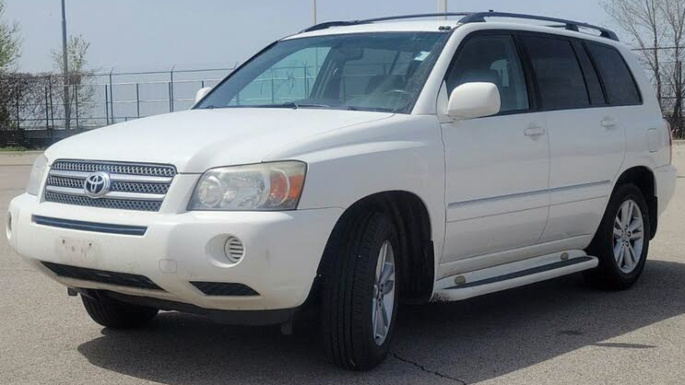 If you are in the market for a family SUV that isn’t a gas guzzler, the Toyota Highlander Hybrid is an excellent choice. This seven-passenger hybrid was the first of its kind and can be found for less than $5,000. The Highlander Hybrid gets 28 MPG city and 33 MPG highway, which is less than other hybrids available but it also features more power than most. With a 3.3-liter V6 putting out 268 horsepower and featuring a towing capacity of 3,500 pounds, this is a hybrid SUV with heavy-duty capabilities. 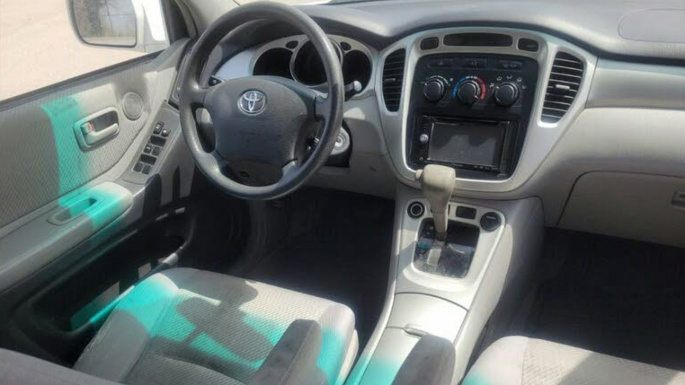 The Highlander Hybrid has a large suite of standard safety features including anti-lock brakes with Electronic Brakeforce Distribution and BrakeAssist as well as stability and traction control. It is also available in an AWD version that features three electric motors, one of which is dedicated solely to the rear wheels for when power is at a premium. The interior features incredibly comfortable seating, plenty of cargo space, and 10 cup holders as well as lots of storage space and cubby holes, making it perfect for a large family that wants to save money at the pump. 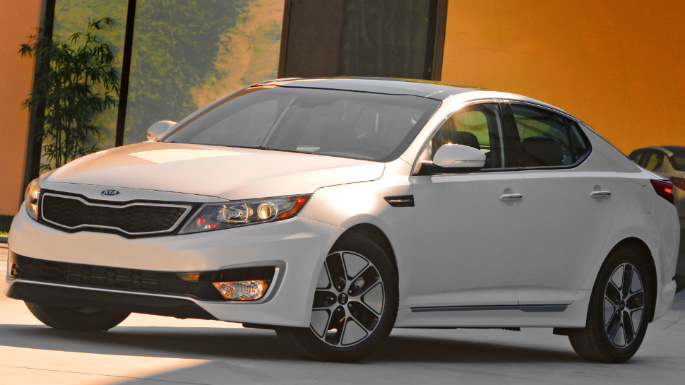 The Kia Optima Hybrid is a mid-size sedan with a sportier look and a quicker, more responsive suspension than you would expect from something slightly more engaging than a minivan. The Optima features a similar design to the Sonata with the addition of some features that make it a better deal for the price. The hybrid is powered by a 2.4-liter four-cylinder engine and an electric motor that have a combined power output of 206 horsepower and 193 pound-feet of torque. This powertrain is capable of a zero to 60 time of 8.9 seconds, putting it fairly high in the running for quickest in its class and model year. 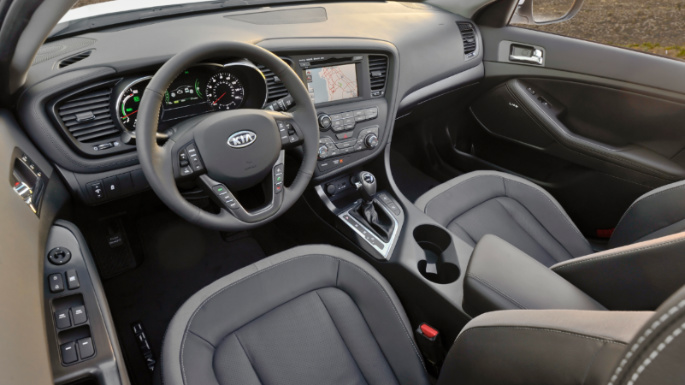 The Optima Hybrid has several safety features including an optional rearview camera and standard hill start assist. It also received a five-star rating in government crash tests as well as the top rating from the Insurance Institute for Highway Safety for frontal and side-impact crash tests. The interior is also impeccably designed with lots of soft-touch materials and a build quality that would rival a new car. 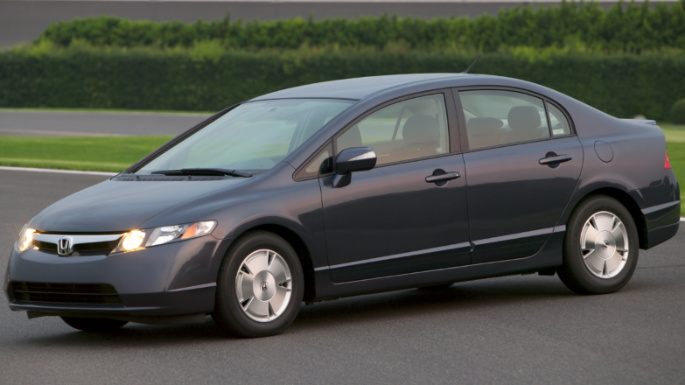 For fans of the high-quality, dependable vehicles made by Honda such as the Honda Accord or Honda Insight, the 2006 Civic Hybrid is everything you could want. Ever since the Civic was first introduced in 1973, it has remained a staple of the economy car world. The Civic Hybrid features some of the best hybrid fuel economy available in this price range. With an EPA-estimated 50 combined MPG, the 1.3-liter powertrain puts out 110 horsepower running through a continuously variable automatic transmission, also known as a CVT. 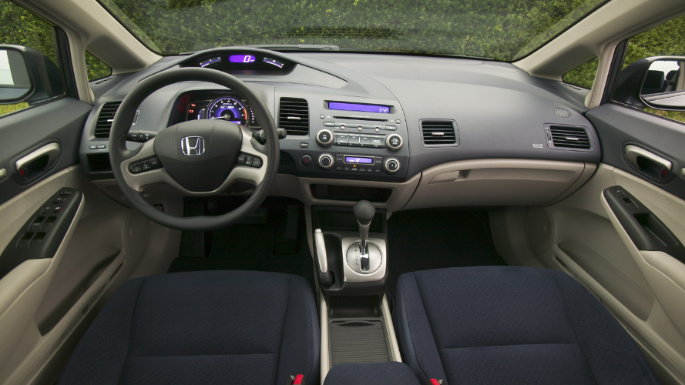 While the Civic has never been known for its luxurious features, the Civic Hybrid is comfortable and fairly roomy, even in the coupe version. The rear seatback is split in 60/40 and the front seat features steering wheel-mounted audio controls and a moonroof. While the styling is not as radical as the hatchback version, it is still a decently handsome vehicle that has all the qualities you would want from your hybrid on top of the extra gas mileage you can get from it. 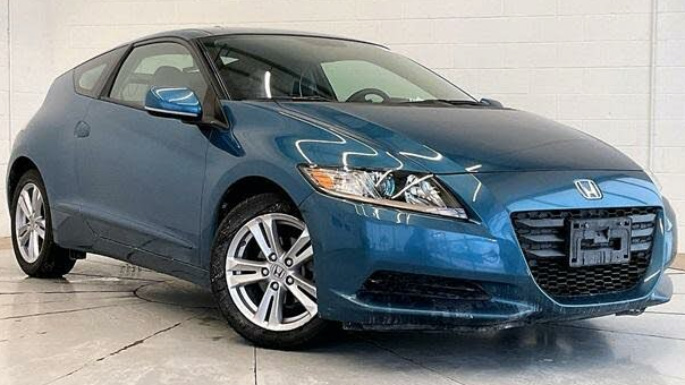 If the Civic doesn’t have the sporty look you are in the market for, the 2011 CR-Z Hybrid should scratch that itch. In a vehicle class that is more known for its efficiency and practicality, the CR-Z brings a little bit of fun into the mix. The suspension in the CR-Z is tuned and designed to be smooth and responsive and the steering is quick enough to be incredibly fun to drive. The powertrain features a 1.5-liter four-cylinder gas engine along with an electric motor that puts out a combined 122 horsepower and 128 pound-feet of torque. 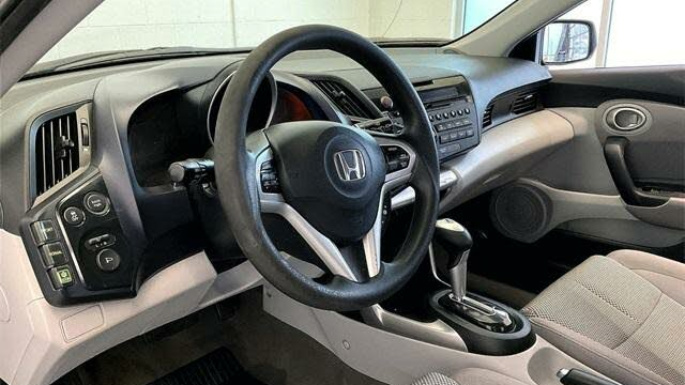 The interior of the CR-Z is more or less what you would expect from a sporty two-door car with just the two front seats and a rear parcel shelf in the back. If you are looking for a family vehicle, this won’t be your best bet. However, the dashboard is futuristic and stylish, just like the unique exterior and it offers a lot in the way of base features. The 16-inch alloy wheels are sleek-looking and it comes with automatic headlights and Bluetooth connectivity. 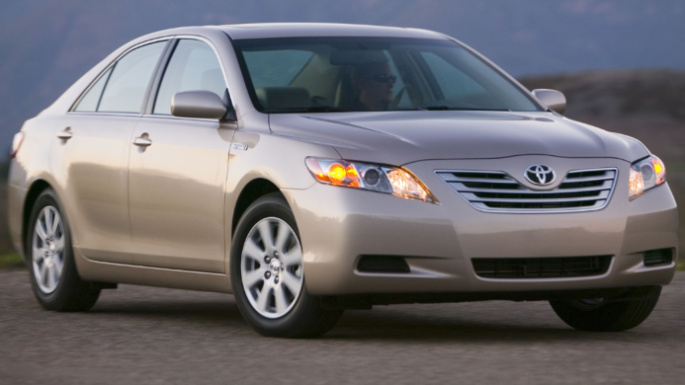 The Toyota Camry is one of the most legendarily reliable vehicles on the market and the hybrid version is no exception. This classic family sedan has enough space for five passengers and the 2007 model year redesign brings a hint of style to the table. The Camry Hybrid features a 2.4-liter four-cylinder engine and high-torque electric motor powertrain that produces 187 combined horsepower and 199 pound-feet of torque. With an EPA-estimated fuel economy of 40 MPG city and 38 MPG highway, it is an efficient and practical vehicle for people who want that dependability. 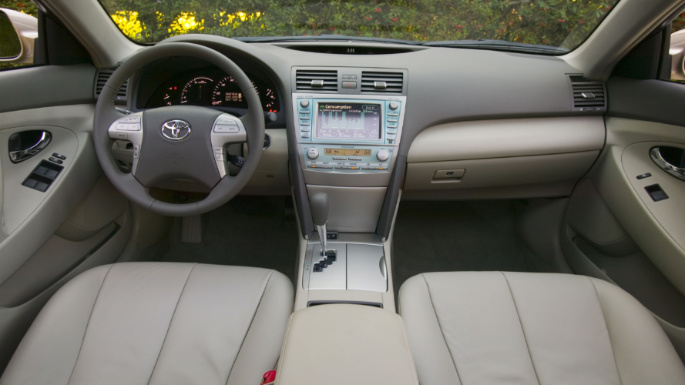 The Camry Hybrid comes with many standard safety features including seven airbags, brake assist technology, and a tire-pressure monitor. The cabin is designed for commuters and families and a test drive will help confirm that it is one of the more comfortable sedans on the market. There are lots of compartments and small spaces for storage, which helps free up even more space in the seating area. 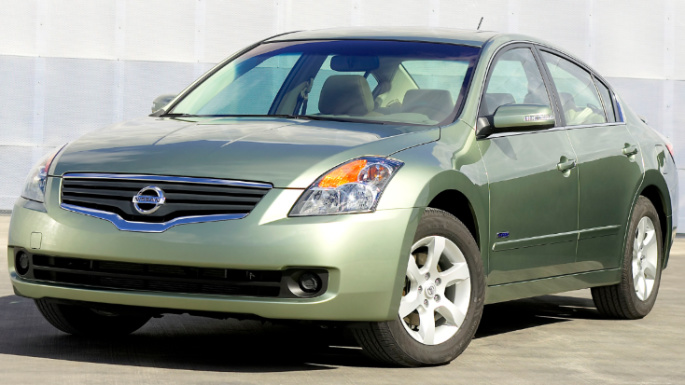 The 2009 Nissan Altima Hybrid is a relatively powerful and sporty hybrid sedan that is perfect for those who want a little bit of fun with their family car. The powertrain in the Altima Hybrid is a modified 2.5-liter four-cylinder putting out 158 horsepower that is combined with a 40-horsepower electric motor with a torque output of 199 pound-feet. The almost 200-horsepower combined drivetrain is more powerful than most other hybrids in its class, which is understated by its practical styling. That being said, the Altima still gets an EPA-estimated 34 combined MPG, giving you the fuel economy you want to go along with the high performance. The Altima Hybrid was given the highest scores possible from both the National Highway Traffic Safety Administration and the Insurance Institute for Highway Safety, making it a great choice for families and commuters who want to reduce their emissions while staying safe. The interior also features materials that are of a higher quality than other vehicles in its category and has lots of cubbies and bins for storage. The steering is also tight and responsive with a ride quality that feels quick and precise. 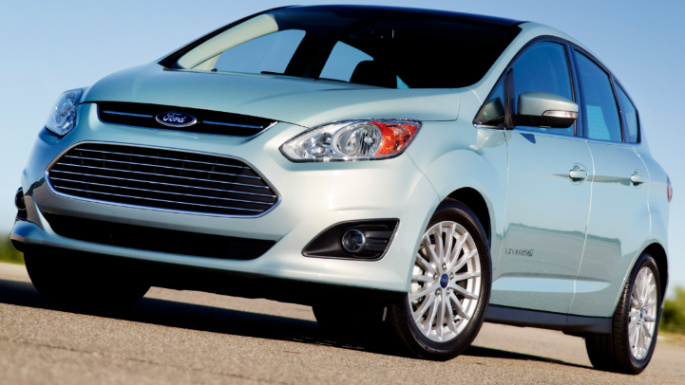 Ford’s compact hatchback hybrid is a wonderful combination of crossover performance and hybrid fuel economy. The C-Max is a “best of both worlds” type of vehicle that could be a good fit for almost any type of driver. In terms of hybrid used cars, it is also one of the newer models you can get for under $5,000, making it a great choice for people who need economy in every sense of the word. With a 2.0-liter four-cylinder engine and a lithium-ion-powered electric motor, the C-Max puts out 188 total horsepower and it has a quicker zero to 60 time than almost any other hybrid on the market. 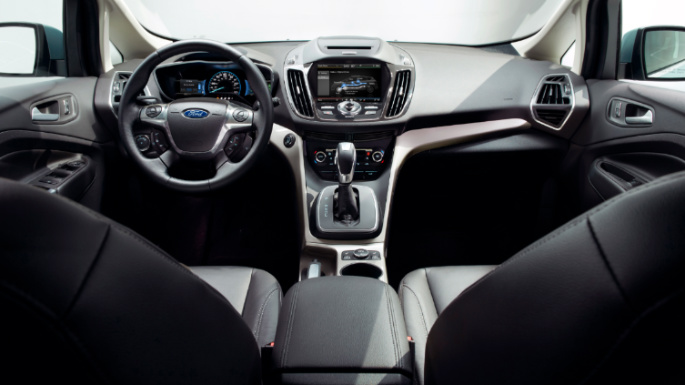 The safety features that come standard with the C-Max include stability and traction control and 911 Assist, which will call for help in the event of an accident. It is also tuned to be incredibly responsive and has a short stopping distance, giving you better overall control. The interior has a reduced cargo space due to the battery but is still big enough for adults and has enough headroom to be comfortable. 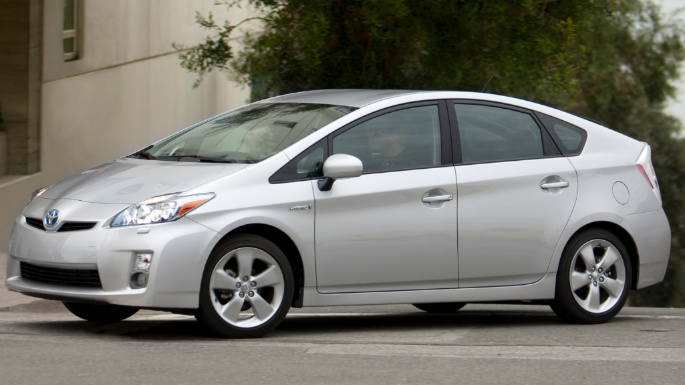 Perhaps one of the most well-known hybrids on the market, the Toyota Prius is an efficient and practical vehicle for people who are looking for a dependable hybrid. In 2010, the Prius was redesigned and revamped with a newer, sleeker look. All the trappings of the classic Prius are still there, though, with a 1.8-liter four-cylinder gas engine and two electric motors putting out a combined 134 horsepower and getting a combined 50 miles per gallon. It also has a zero to 60 time of 10.1 seconds, which is a bit quicker than other hybrids in its class. 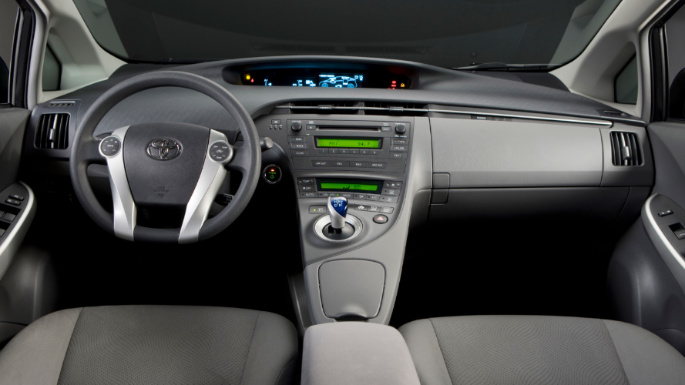 The Prius is also notoriously safety-conscious with antilock disc brakes on all four wheels and traction and stability control. The cabin is incredibly quiet and comfortable and the suspension has a tight, responsive feel that can almost be described as sporty. The steering is electronically controlled as well, which makes for a fun driving experience that also gives you great maneuverability in parking lots and tight corners. One of the most interesting features, though, is the ability to select between different driving modes for different situations, which include normal EV, eco, and power.

Finding the right hybrid within your budget can be difficult, especially if you don’t know what to look for at the used car dealership. Fortunately, there are quite a few award-winning hybrids available for under $5,000, many of which will still be under the manufacturer’s battery warranty. This allows you to get more out of your used hybrid and keep it running for many years of quality service for a lot less money.