Best and Wildest Car Colors for 2021

It’s not just you: There’s a reason every car on the road is seemingly some form of white, black, or gray. According to the 2020 Color Popularity Report from PPG Industries, a leading paint supplier, 64 percent of new cars sold in 2020 were considered one of those three colors, white being the most popular car color — again. Automakers have adjusted accordingly, and some of the most popular vehicles on the market have color schemes reminiscent of an “I Love Lucy” rerun. Factors such as resale value for consumers and used car speculators, and not stocking unpopular paint colors for dealers have tilted the color choices over the years.

Some automakers, however, live in Technicolor, offering some dazzling examples of automotive colors. And they’re not all special order paints on exotic cars, although nearly every high-end company will paint a car just about any color for the right price. But even some popular and firmly mainstream vehicles offer bright colors, elaborate painting methods, and even two-tone combinations. 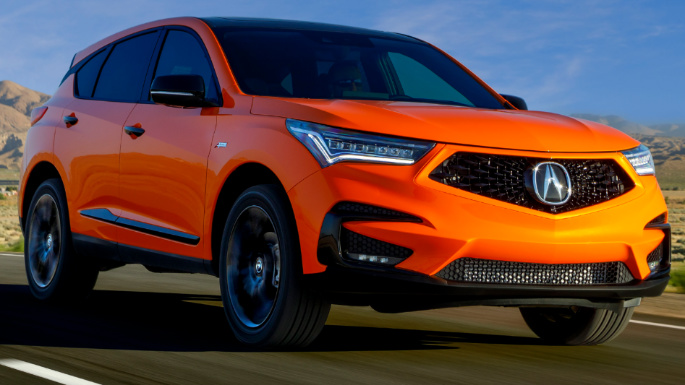 The Acura Performance Manufacturing Center in Marysville, Ohio is responsible for producing the revived NSX supercar, but it’s since been extended to special editions of the brand’s more everyday vehicles. Last year, the three-row MDX and TLX sedan were offered as PMC Editions and painted in a red also available on the NSX. This year, the two-row RDX SUV gets the PMC treatment and the Thermal Orange paint that’s a $1,000 option for the supercar. PMC cars are assembled in the NSX’s handbuilt area and get special treatment to the finishes, even if there isn’t more performance manufactured in. Still, when has an Acura SUV looked this interesting? 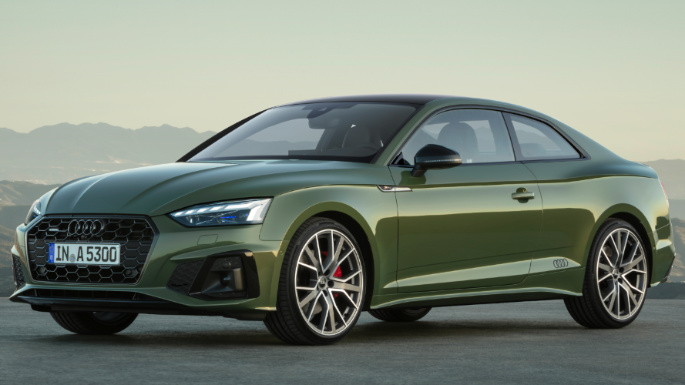 Green on cars was nearly left for dead after some unfortunate variations of teal in the 1990s, but it has staged something of a comeback in these gray times. Audi offers various shades of green across its wide model range, but District Green is perhaps the most green paint job it offers right now. Not a dark green, but not exactly a military green, it’s an unusual shade that won’t be to everyone’s tastes. But then that’s part of what makes it interesting. And it’s offered on cars with very different shapes, from coupes and convertibles to SUVs. 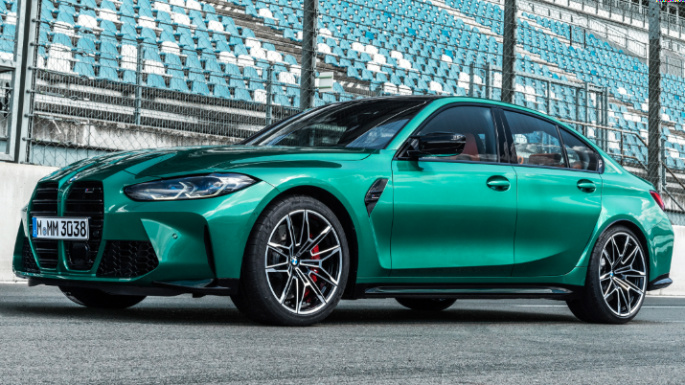 One way to preoccupy yourself while coming up with opinions about the BMW M3 and M4’s controversial new grille is to look at the color selections. The company’s compact performance coupe and sedan pair typically offers a more interesting paint lineup than the standard 3 Series and 4 Series, with bright reds and yellow. For 2021, however, the star of the palette is Isle of Man Green, a deep-ish shade that’s already rich on its own and looks sharp in every situation, but is really set off by all of the gloss black trim on the exterior. It’s good enough to wipe out hangups on the rest of the car’s design. Another way to get around the looks is to drive the M3 or M4. But then it’s harder to enjoy the paint. 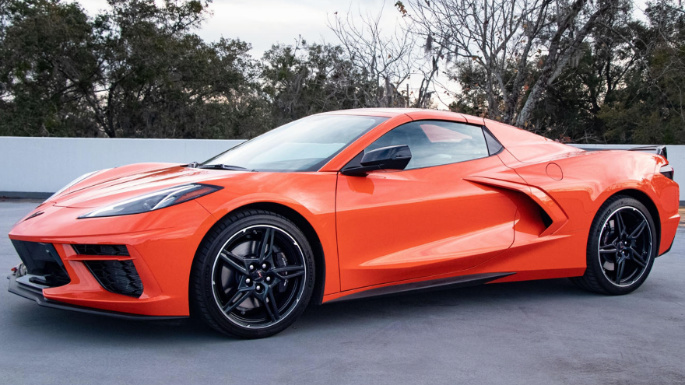 It doesn’t usually take a color to make a Chevy Corvette stand out, especially not the mid-engined C8 Corvette Stingray. But of the colors offered on the 2021 model of America's entry into the supercar stakes, Sebring Orange continues to separate itself from the typical red or white (or blue, for that matter) Corvettes. The especially metallic paint shimmers more in the light than some of the other choices, too, but it also doesn’t smother all of the details on the Corvette’s new exterior, with creases and subtle bulges. Better still, it isn’t yet another one of those red cars with two seats. Ferrari does that well enough on its own. 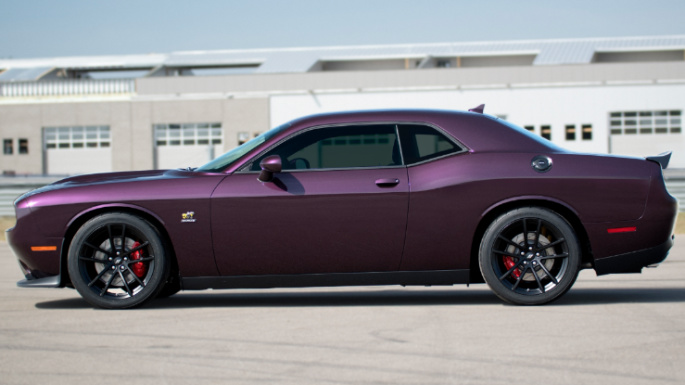 Not only are the Dodge Charger and Challenger muscle cars known for rather outrageous exterior color options, they’re also known for characterful names. If it isn’t implied already, Hellraisin is a purple hue available on pretty much every one of the extensive lineups of each car, from V6s to a slew of V8s that get incredibly powerful. And there are plenty of other unusual hues to choose from, along with various decals, to make it unlikely to pull up next to an identical Dodge. 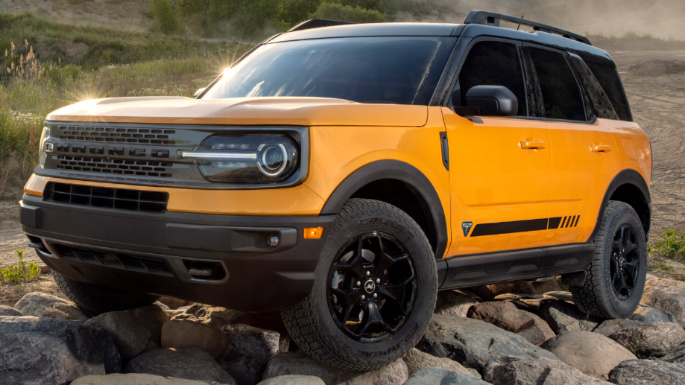 Ford’s typically reserved car paint selections are starting to give way onto models other than the Mustang. And the 2021 Bronco Sport compact SUV is perhaps one of its most audacious designs in years. Each trim level on the Bronco Sport is seemingly crafted around a personality rather than a group of equipment, and the bold colors include Cyber Orange. With the available black roof and pillars, the bright color makes the Bronco Sport’s styling stand out even more among similarly sized and priced SUVs — even if there might be some explanation that it’s not the eagerly awaited big Bronco. But Cyber Orange is also offered on the Ranger midsize pickup, giving that mainstream model similar character to that Ford Mustang muscle car. 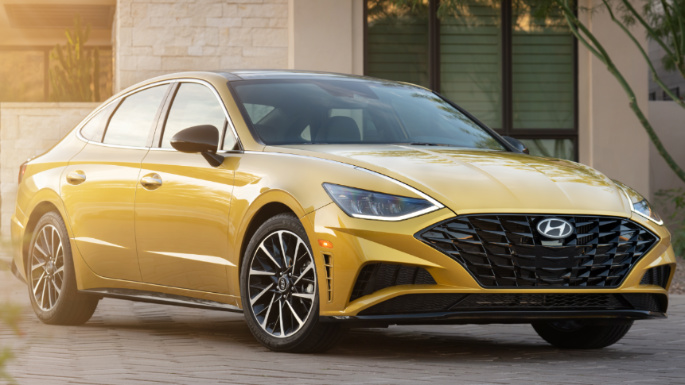 As if the most recent iteration of the Hyundai Sonata weren’t head-turning enough, it’s also available in a pretty bold shade of golden yellow. Glowing Yellow, rather, is offered not only on the mid-grade SEL Plus trim, but also on the N Line semi-performance sedan, with its 290-horsepower, 2.5-liter turbo engine shared with the Kia K5 GT, 19-inch wheels, and distinctive exterior trim. The Sonata already had a striking shape, and the Glowing Yellow paint makes it look far different than an average midsize sedan. 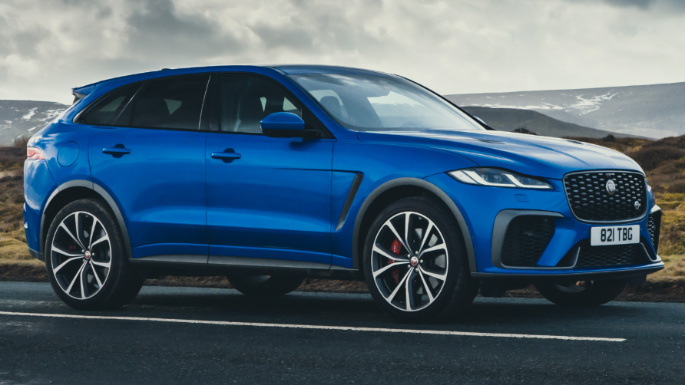 Jaguar is best-known today for its luxury sedans (and SUVs), but most of its existence has been as a sports car brand. After a few years in a wasteland, the sporting heritage has returned on its existing models. Velocity Blue, found on the F-Type sports coupe and convertible and the 550-horsepower F-Pace SVR SUV, represents one of the breaks with the stodgy sedan tradition. Available through Jaguar Land Rover’s Special Vehicle Operations and the Premium Palette, the highly finished blue matched the highly capable performance-oriented versions of these cars. 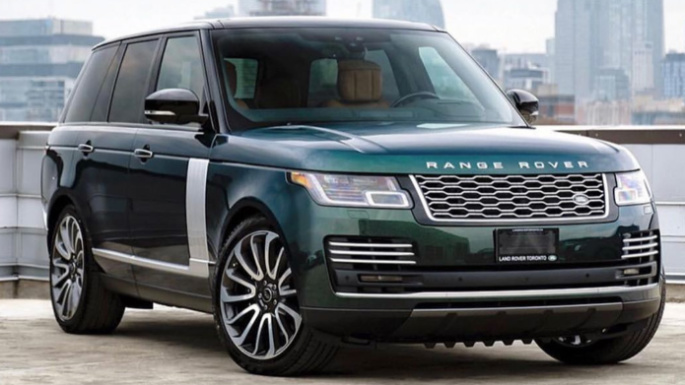 There’s something regal about a dark green Range Rover and Land Rover knows this. While the Royal family might specify its own shade, Land Rover offers commoners a different take on the classic color. Spectral British Racing Green takes a color first used a century ago on racing cars and makes it more vibrant. ChromaFlair paint technology allows it to go from teal and blue to various shades of green depending on the light. It isn’t the original, but just because something is remastered doesn’t make it bad. Be warned: It’s an astonishing $9,200 extra, and to have it in a “satin matte” finish is another $2,850. 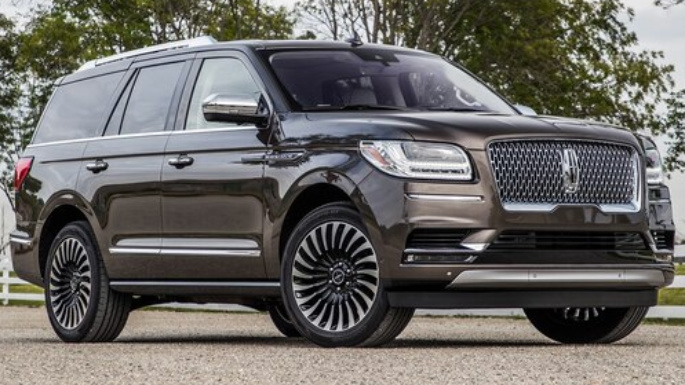 No longer a Ford afterthought, Lincoln’s designs have been significantly stepped up in recent years, and now its entire lineup and only similar to other Lincolns. But it’s easiest to distinguish the massive Navigator full-size SUV, and it’s today’s best representation of the old land barge Lincolns. With that in mind, think of Chroma Molten Gold as a 2020s interpretation of 1970s brown. Available on the ultra-luxurious Navigator Black Label, the metallic gold goes above and beyond to make sure it doesn’t blend into any fleet of black cars for executives (or Uber Lux users). Its ability to catch the light and look more alive than any gold or brown paint also captures that high-end design element the rest of the Navigator pulls off very well.

Available on all 2021 models 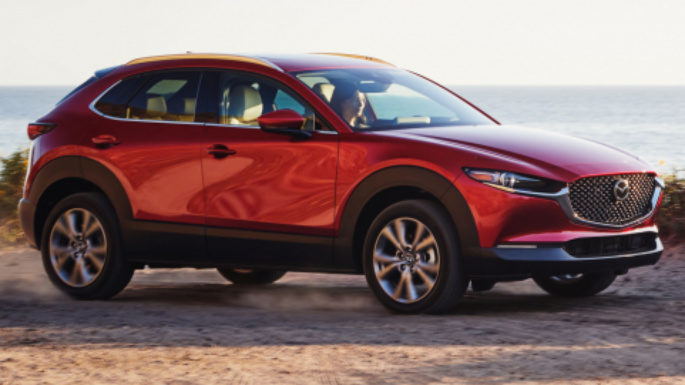 Mazda’s cars might offer more muted exterior colors now that the company is trying to march its image higher up the brand ranks, but the Soul Red paint offered across its lineup might be its most premium color. The vivid red is enhanced with a special process that Mazda says brings out that enhances the metallic red color in the way it would on a hand-painted concept car — but it’s offered on all models from the least-expensive Mazda CX-3 crossover to the MX-5 Miata RF and the large CX-9 three-row SUV. A $595 option on every model, but well worth it. 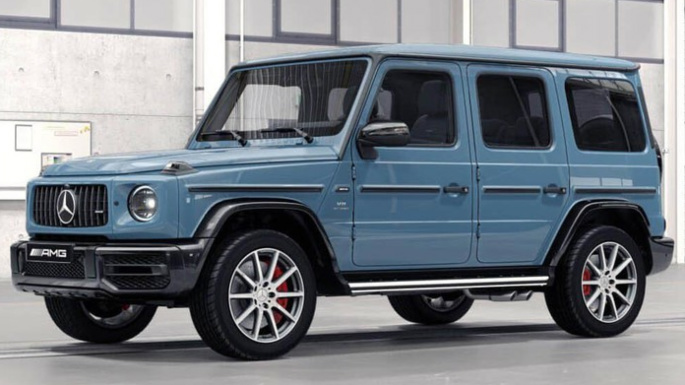 An imposing vehicle in any color, the Mercedes-Benz G-Class has loose roots as a military vehicle, which is why so many of them look good in muted greens and grays, or even United Nations-esque white. Subsequently, the “G-Wagen” is also a status symbol of wealth and flamboyance, which is why so many of them are silver or black. A shame, considering Mercedes offers a dozen G Manufaktur Paints that are more distinctive than the standard list. One of those colors is China Blue, a pale blue that’s a very close reproduction of a classic 1970s Mercedes hue. It’s a $6,500 option, but when a G-Class starts $132,800, does it really matter? Officially, China Blue is special order from the factory and only for the G-Class. But put enough money in the right hands and the factory could be persuaded to paint other Mercedes cars in this gorgeous shade.

Available on Kicks and Sentra 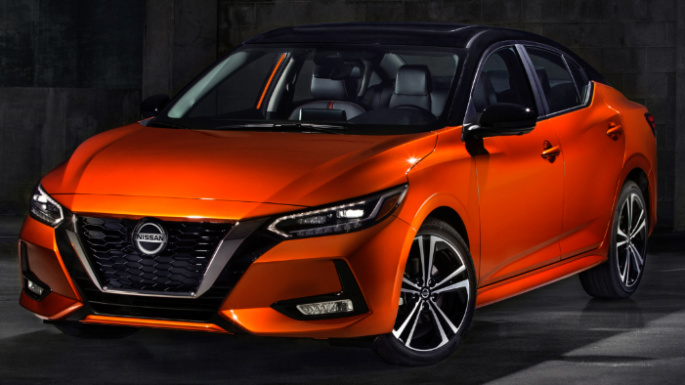 It wasn’t long ago that Nissan’s mainstream models were staid cars that refrained from anything adventurous to appeal to the widest possible audience. That strategy wasn’t winning new fans, so it’s been bolder with its designs, first with the 2020 Sentra and now with the revised 2021 Kicks. Both start at less than $21,000 and cover the popular compact sedan and small SUV classes, but add unusual design touches. That includes available two-tone paint schemes, including Monarch Orange with a Super Black roof. It gives off a Mini Countryman impression on the Kicks, but the Sentra comes off as distinctive from any of its rivals. 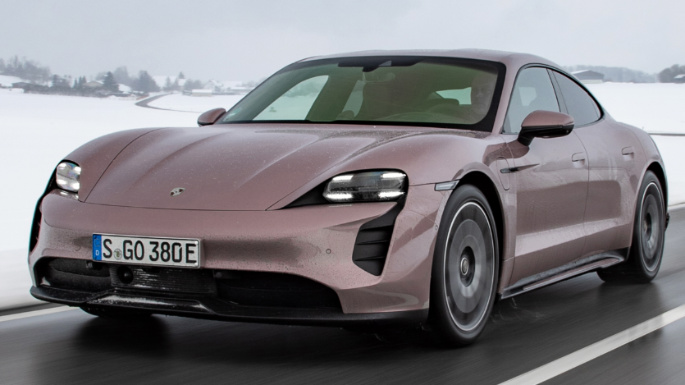 Porsche is another brand that will let customers have their cars in pretty much any color possible, yet it still offers a wide choice of factory colors on each of its models. The Taycan is the company’s serious entry into the performance electric car market currently dominated by Tesla, so it’s interesting that Porsche officially offers it in a color named after a smoothie. Whether you think Frozen Berry looks pink or purple or something else is beside the point, because it’s always good to see any Porsche that isn’t silver, red, or black. Just don’t call it “Rose Gold.” 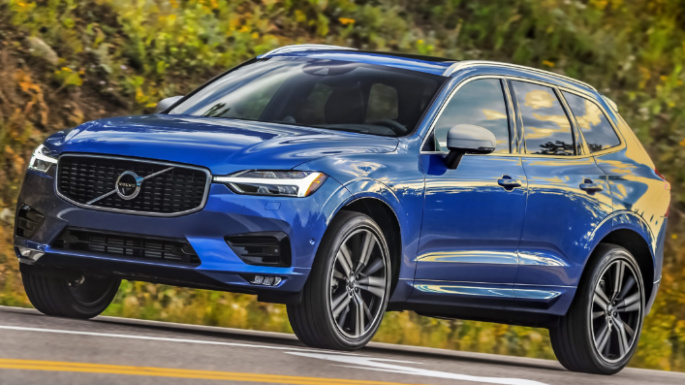 Volvo’s most recent angle has pitched the brand more upscale and to those who value minimalist style and calm over the brash personality of some rivals. Still, the brand can’t escape its old sporting intentions and the Bursting Blue paint offered on some R-Design versions of its vehicles harks back to that. While R-Design models don’t offer any performance upgrades over other trim levels, they do get larger wheels and gloss black exterior accents that change the typically subdued appearance of the V60 wagon and XC60 two-row SUV into something far more striking. And the funky little XC40 crossover gets funkier.