The Least Fuel Efficient Cars You Can Buy Right Now

Electric vehicles may be the talk of the industry right now and moving forward, but we're still living in a golden age for gas-powered, high-horsepower exotic supercars, muscle cars, hypercars, and yes, even SUVs. But with all this power comes equally poor gas mileage.

But which vehicles are the most thirsty at the pump? To find out, we rounded up the top gas-guzzlers across the industry. Check them out: 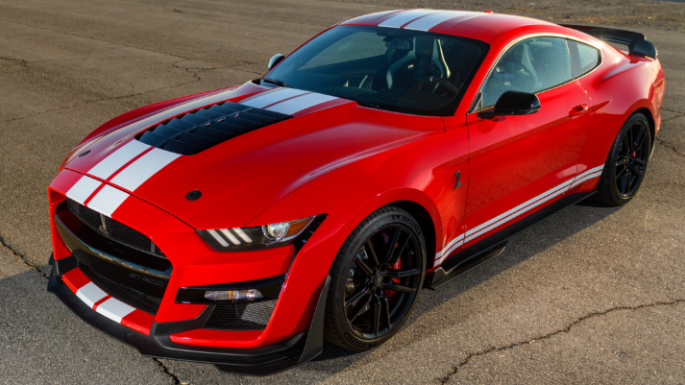 The Ford Mustang has many variants and trim levels that have been developed over the years and have been popular for generations. Among the most popular is the Shelby GT500, which is equipped with Ford's 5.2-liter V8 engine producing a massive 760 horsepower and 625-lb ft of torque (check out our review of the GT500 here). This iconic muscle car utilizes a rear-wheel-drive (RWD) based powertrain paired with a seven-speed automatic transmission. 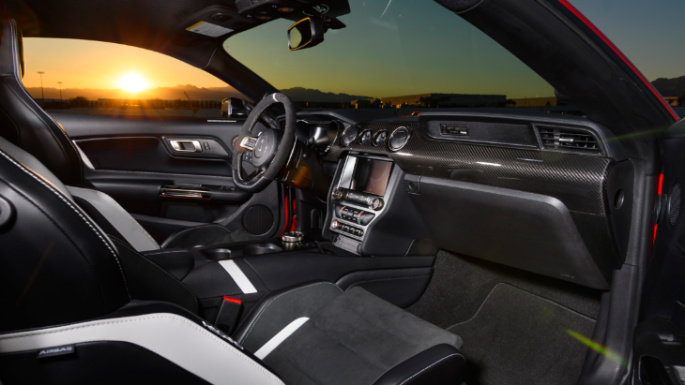 Producing 760 horsepower comes at a cost, however, and in the case of the Shelby GT500 that cost is inefficient fuel economy with an EPA estimated mpg of 12 mpg city and 18 mpg highway. While the majority of Shelby GT500 buyers are not concerned about paying higher gas prices, the GT500 ranks among the least fuel-efficient vehicles you can purchase in 2021. 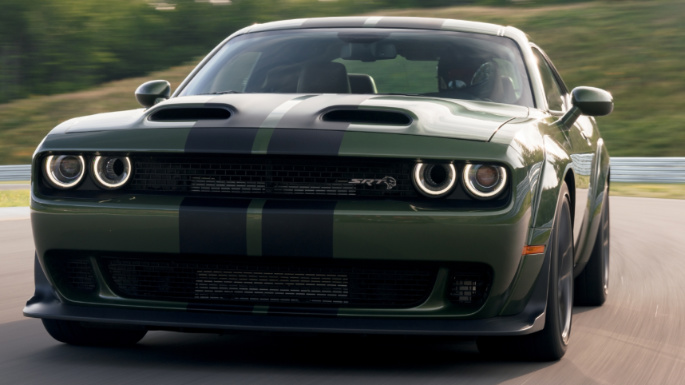 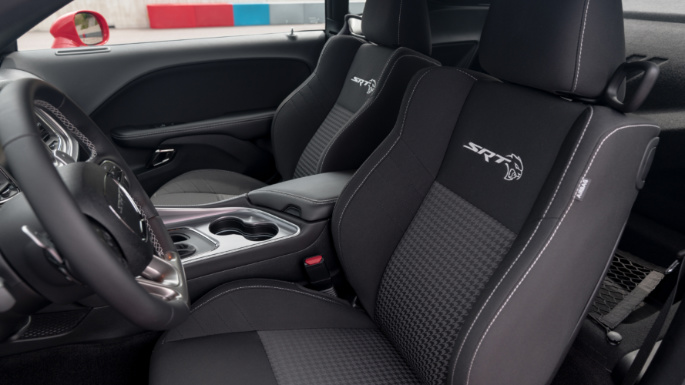 The Challenger SRT Hellcat Redeye features an optional eight-speed automatic transmission creating a powertrain that launches the Redeye from 0-60 miles-per-hour (mph) in a short 3.6 seconds. With performance at the forefront of design, the Redeye suffers from poor fuel economy rating 13 mpg city and 22 mpg highway. 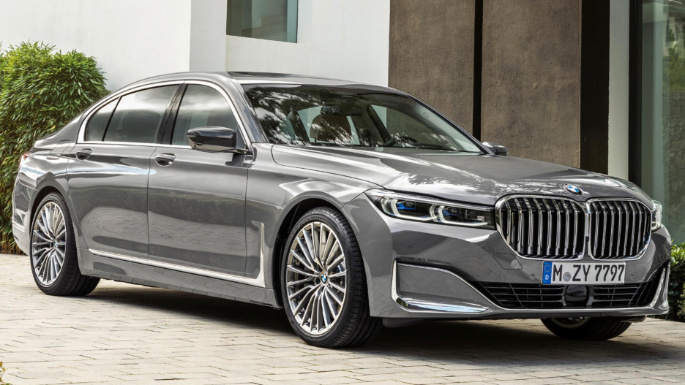 The BMW seven series is a top-of-the-line vehicle model produced by BMW. The seven series offer a spacious interior and luxuries reserved for the seven series models. The M760i xDrive Sedan model seven series BMW is powered by a monstrous twin-turbo V-12 engine producing 600 horsepower and 627 lb-ft of torque. 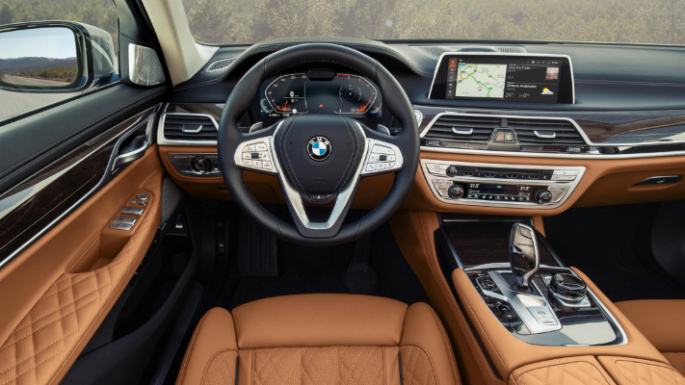 The M760i xDrive is an all-wheel-drive (AWD) drivetrain platform ran by an eight-speed automatic transmission with an optional manual mode. As you can imagine the large engine drinks fuel and with a gross weight of 6,261 pounds the M760i's mpg sits at 13 mpg city and 20 mpg highway. The BMW seven series offer standard luxuries such as rear parking sensors, a surround-view parking camera system, and hands-free park assist among many more. 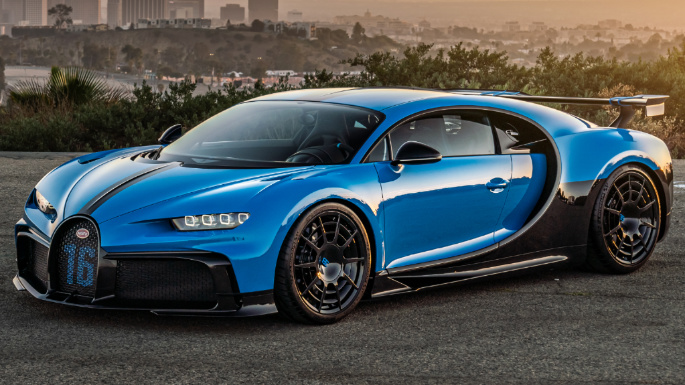 The Bugatti Chiron Pur Sport is the definition of performance over everything. The Pur Sport's EPA ratings in 2020 were tied for absolute worst combined fuel economy at 11 mpg and now in 2021, the Pur Sport is in the running again for lowest fuel economy with an additional rear spoiler causing the mpg to drop to 10 mpg combined. 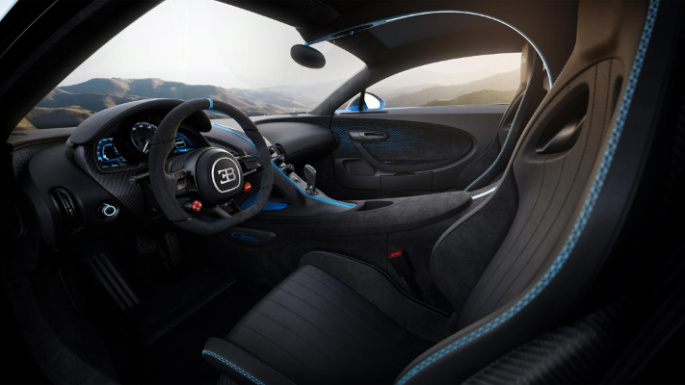 This $3.6 million machine was built for speed, specifically for the track; with Bugatti wanting to create an apex-focused track car. The Bugatti Pur Sports' quad-turbo 8.0-liter W-16 engine produces 1,500 horsepower and 1,180 lb-ft of torque.

All of this power is transferred to the wheels via an AWD drivetrain paired with a seven-speed dual-clutch automatic transmission. To put the Pur Sports' EPA rating of 8 mpg city and 13 mpg highway into perspective, this hypercar would run completely out of fuel before a Toyota Prius would burn three gallons. 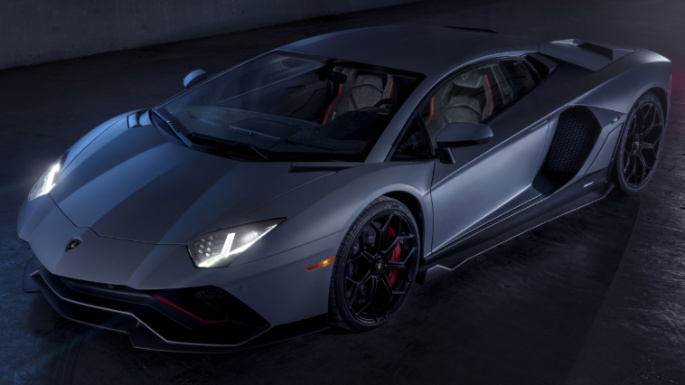 More fuel-efficient on the highway than a Bugatti Chiron Pur Sport, the Lamborghini Aventador scores an EPA estimated mpg of 9 mpg city and 15 mpg highway in both the roadster and coupe variants.

The Aventador is powered by a V-12 engine producing 759 horsepower and 531 lb-ft of torque. The V-12 engine is mounted in the middle of the vehicle to help weight disruption and the drivetrain relies on Lamborghini's AWD platform to put the power to the road. 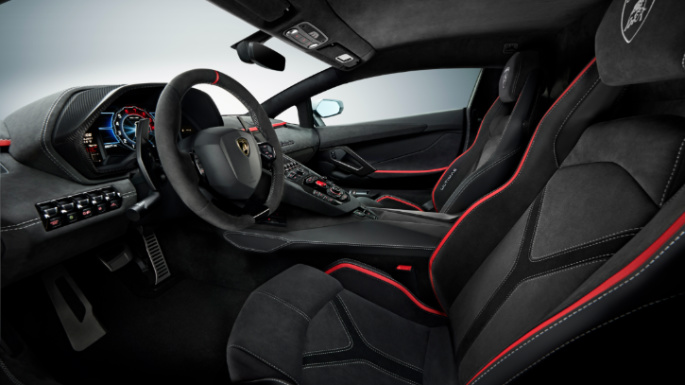 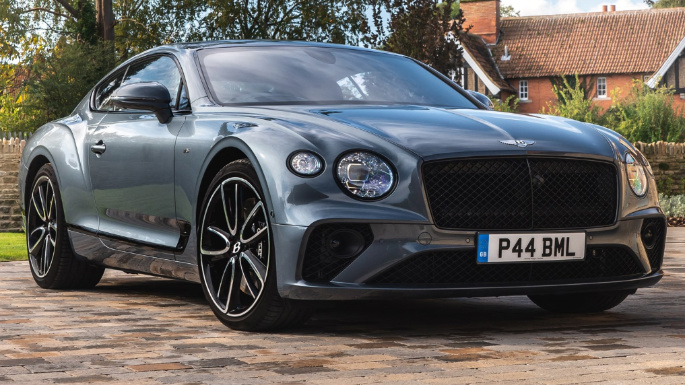 The Bentley Continental GT shares a similar pricing universe as the BMW M760i or the exotic Lamborghini Aventador, so it might as well share those models' awful fuel economy too, right? The Bentley scores extremely low in EPA estimated mpg at 13 mpg city and 22 mpg highway. 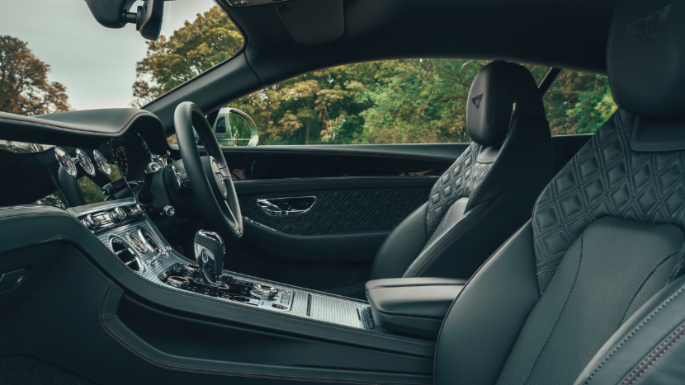 The Bentley Continental GT is in a class of its own when compared to these other vehicles, however, due to its 626 horsepower twin-turbo 6.0-liter W-12 engine and eight-speed dual-clutch automatic transmission.

The differences do not end with the engine as the Bently Continental GT has a luxurious interior offering standard features such as leather seats and fine woods throughout the cabin. 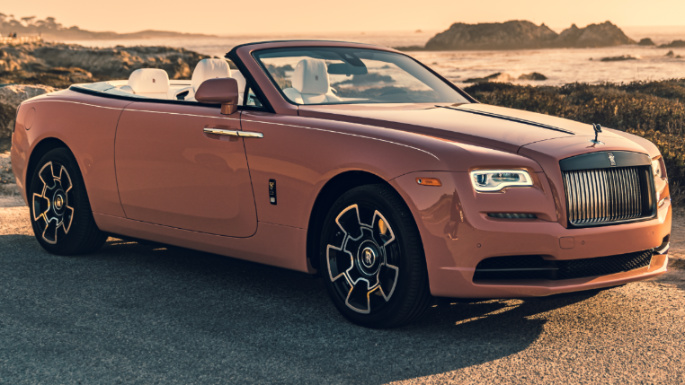 Rolls-Royce is synonymous with luxury but luxury begets weight and weight can greatly affect a vehicle's mpg. The Rolls-Royce Dawn is by far the heaviest vehicle on our list weighing in at 6,700 pounds of gross weight. 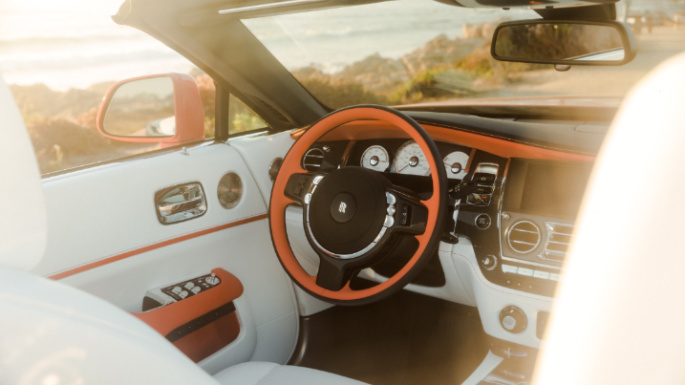 The Rolls-Royce Dawn offers a 6.6-liter V12 engine producing 569 horsepower and 605 lb-ft of torque, all of which are needed to launch the heavy luxury vehicle from 0-60 in 4.3 seconds.

The mighty Rolls-Royce V12 is matched with an eight-speed automatic transmission and designed with a rear-wheel-drive (RWD) drivetrain layout. Although the engine has great performance figures, the pure weight of the vehicle draws on the fuel efficiency of the Dawn, which ultimately scores an EPA rating of 12 mpg city and 19 mpg highway. 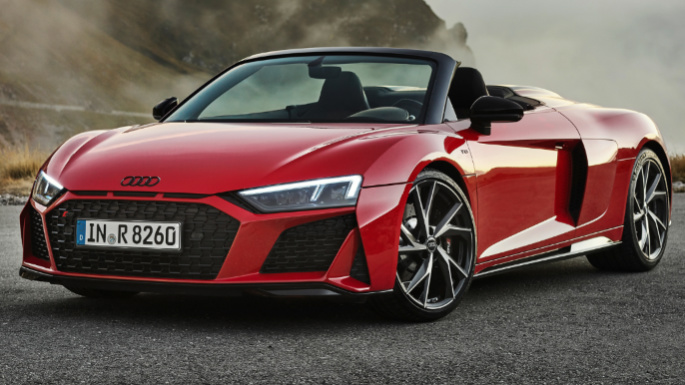 The Audi R8 Spyder is offered with either an RWD as standard or an optional AWD drivetrain system, with the RWD variant offering better MPG and better handling. 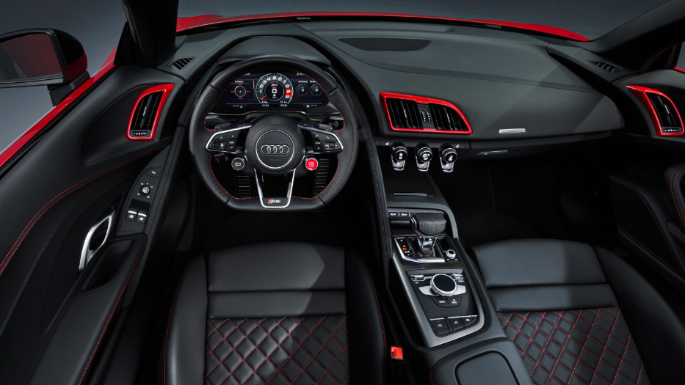 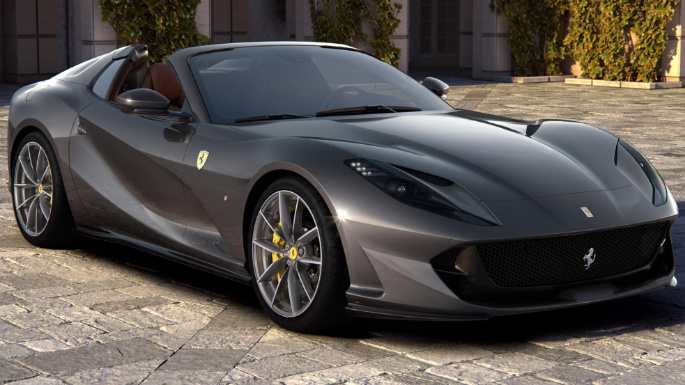 Last and certainly not least is the Ferrari 812 GTS, a topless version of the Ferrari 812 Superfast. It's rated by the EPA at 12 mpg city and 15 mpg highway. That said, no one buys a Ferrari for eco-friendly gas mileage saving reasons, they buy them for speed and excitement. 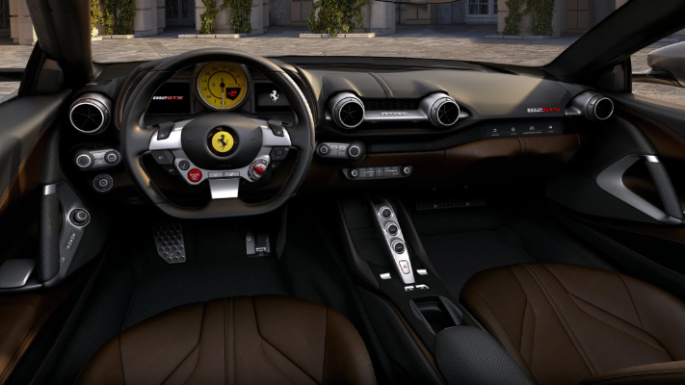 The Ferrari 812 GTS is a front-engine, RWD two-door convertible built with a 6.5-liter V-12 producing 789 horsepower and 530 lb-ft of torque. The 812 GTS utilizes a seven-speed twin-clutch automatic transmission that enables the 812 GTS to sprint to 60 in an impressive 2.7 seconds, with a top speed of 211 mph.

When considering purchasing a new vehicle, the majority of the population are concerned with the Environmental Protection Agency's (EPA) miles-per-gallon (mpg) rating. With fuel prices on a never-ending fluctuation, the mpg of a vehicle is one of the largest selling points automakers have in 2021. Such a large selling point in fact that automakers have invested in the development of electric vehicles as interest has increased over the years in the United States.

The United States is slow in growth in the EV market compared to countries such as China and Europe, but none the less the EV market is growing in the United States. Companies such as Tesla have made electric vehicles desirable to the general public and have had great success with their vehicle sales such as their Tesla Model S providing a great alternative to hybrids such as the Toyota Prius Prime and Honda Accord Hybrid.

For some buyers, however, fuel economy is an afterthought; if a thought at all. In the world of sports cars, supercars, hypercars, and luxury automobiles fuel economy is rarely even discussed. Rolls-Royce is a great example in that their entire lineup of vehicles is fuel-inefficient. For exotic cars with horrible fuel economy, however, they are often driven much less than everyday mass-produced vehicles thus producing less of a negative environmental impact than more fuel-efficient daily drivers. No matter your preference of vehicle, this is a list of the least fuel-efficient cars on the market today.