Most Expensive Cars to Insure in 2021 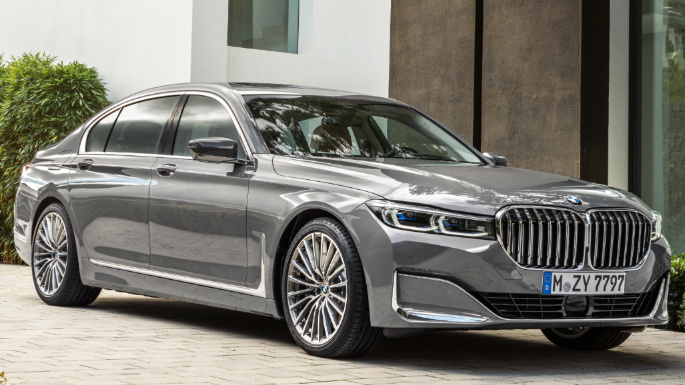 BMW's flagship executive sedan is an expensive car, with an MSRP that reaches nearly $87,000. With versions of the car available with a twin-turbo 4.4-liter V8 engine, the high-performance, high-horsepower German luxury car is one that begs to be driven quickly. 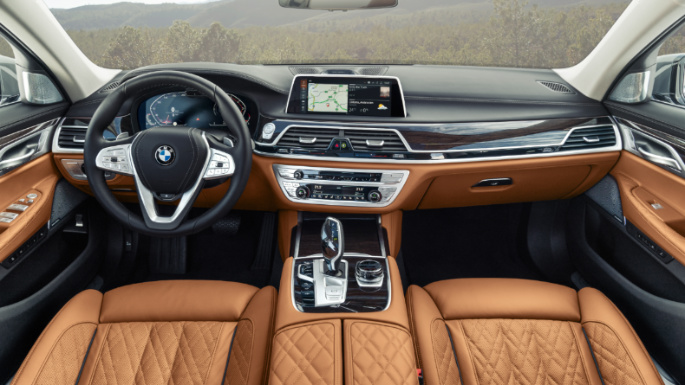 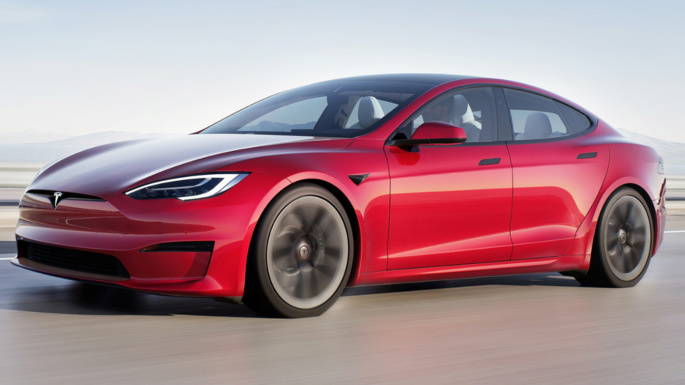 The Tesla Model S was the brand's first real mainstream car and remains its flagship, even as other models like the Tesla Model X Performance get plenty of time in the spotlight. The electric luxury vehicle is expensive to purchase and repair costs are high. 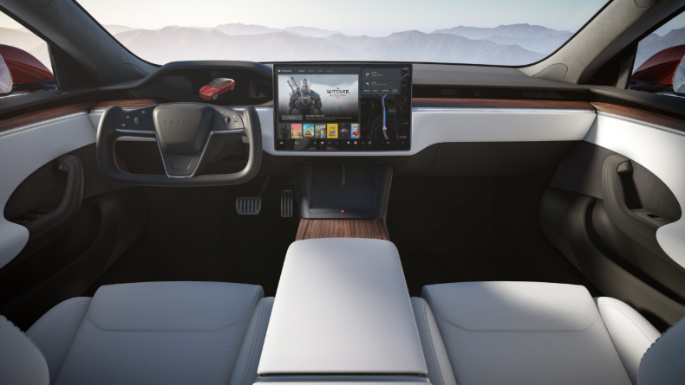 Complicating issues further is the fact that Tesla is notoriously tight with who it allows fixing its vehicles, and if the car's batteries are damaged in a crash there's a chance the whole thing could end up totaled. This is a big reason why insurance coverage for Tesla is so expensive. 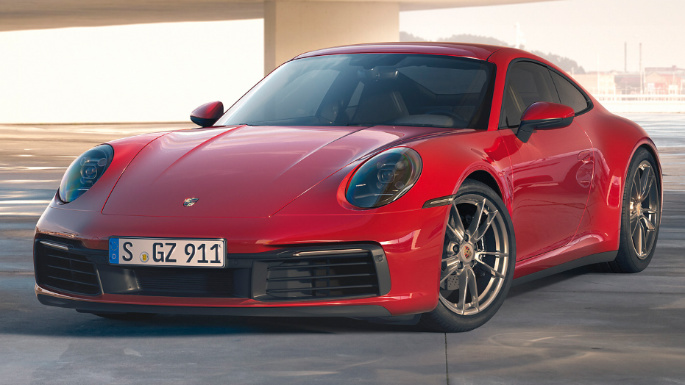 It should come as no surprise that one of the world's premier sports cars is also one of the most expensive to insure. The legendary sports coupe is well known to insurance companies as an expensive car that people like to drive fast. 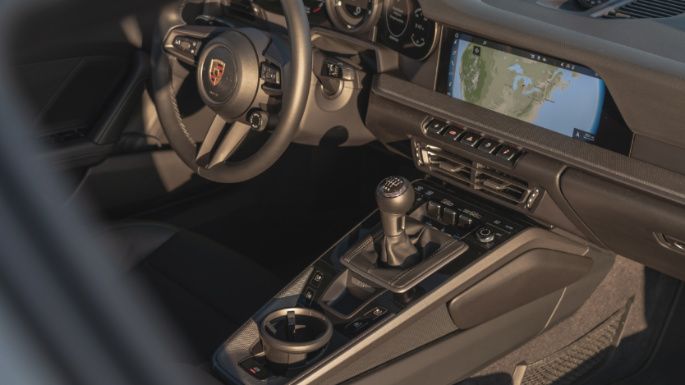 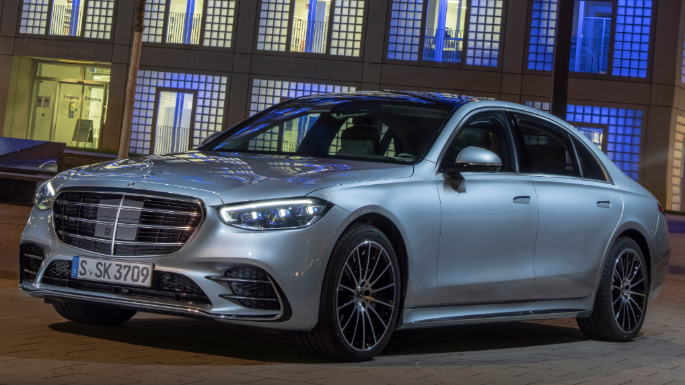 The Mercedes-Benz S-Class is a flagship sedan with cutting-edge technology and a price tag that puts it in truly exclusive territory. Despite having some of the most advanced safety features and a luxurious driving experience, buying an insurance policy for an S-Class is not a cheap endeavor. 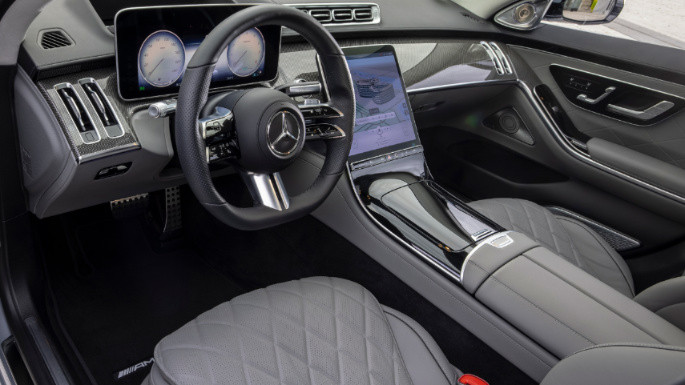 The S-Class has a price that starts at just shy of $110,000 and climbs from there. True to form for Mercedes, the car's options can add several thousand dollars to the bottom line, but most buyers will opt for them anyway because they are what makes the car so special. Because of this, replacement and repair costs for the car can be astronomical, as replacing even a simple body panel can end up being painfully complicated. 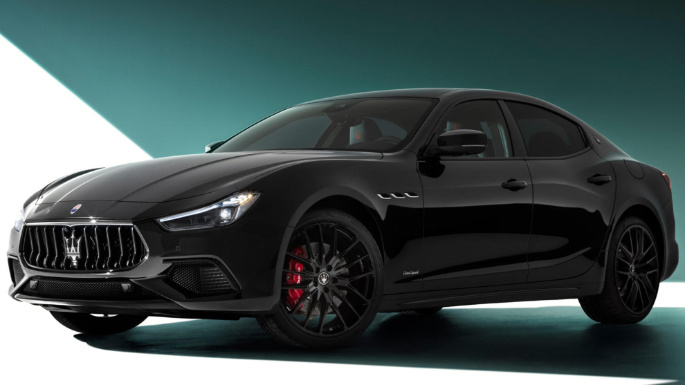 The Ghibli may be the "lesser" of Maserati's two sedans, but that does not stop it from being one of the most expensive vehicles to insure. The Ghibli's base price lands around $75,000 and climbs from there to a much higher amount. That, combined with its striking performance and high costs to repair make it a nightmare when it comes to auto insurance rates. 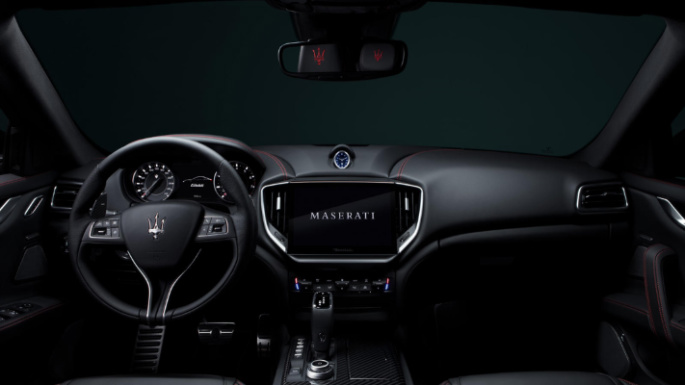 The Ghibli's base engine is a twin-turbo V6, where many of its competitors require buyers to step up a trim level or two for the more powerful engine. At the top end, the Trofeo model offers a twin-turbocharged V8 with 580 horsepower, adding to the cost of car insurance for the Ghibli. 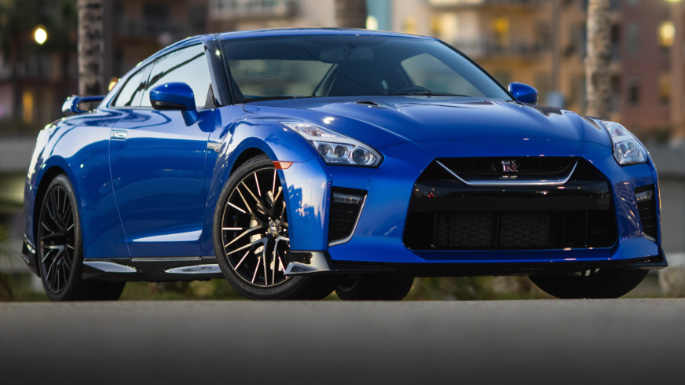 The GT-R is Nissan's ridiculously powerful four-wheel drive sports car that offers scorching performance and insurance costs that match. Because of the car's hand-built construction, repair costs can be astronomical, so even drivers with good credit scores and impressive driving records will see car insurance quotes that might be shocking. 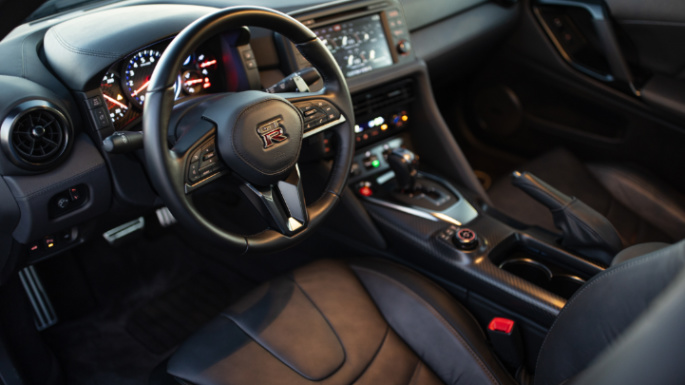 The 2021 Nissan GT-R's price tag has ballooned over the years to the point that now it's in line with other supercars. The cost for a new GT-R starts well over $100,000 and can grow to well over $200,000 in the right configurations. That's why the GT-R is in the top five vehicles for the most expensive average rates. 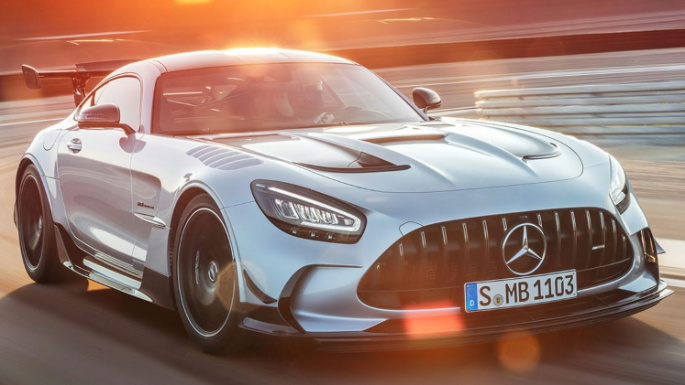 The Mercedes-AMG GT coupe is one of the most exclusive - and expensive - vehicles in the German automaker's catalog. As a result, the GT lands at number four on our list for the most expensive cars to insure. Beyond its sticker price, which starts at $120,000, the GT is massively powerful, with 523 horsepower from its hand-crafted twin-turbo AMG V8. 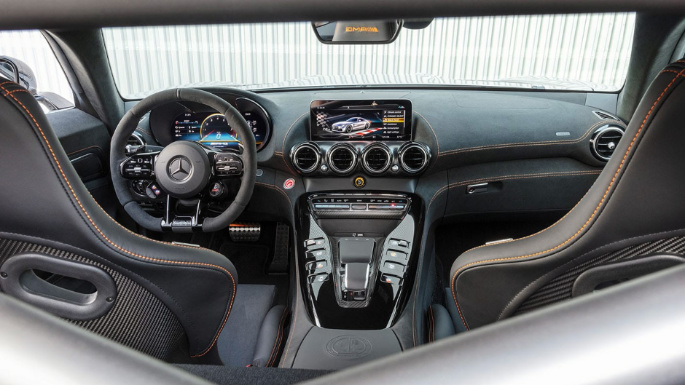 Like the GT-R, the reason car insurance premiums are so stout for the AMG is that many of its components are hand-made or are very expensive to reproduce. When a driver files an insurance claim for one of these cars, it won't be cheap for the insurance company, so they have to cover their risk with higher premiums. 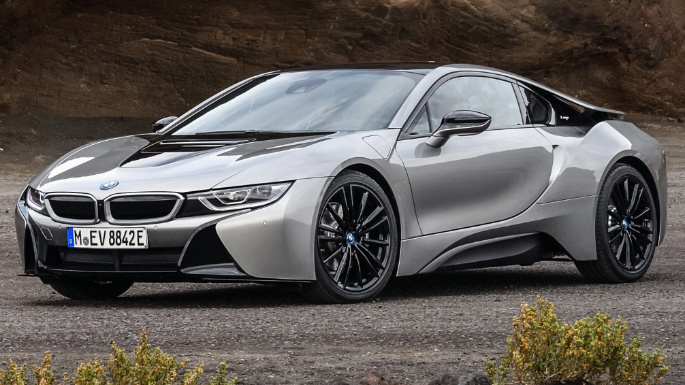 The BMW i8 may be on its way out as the automaker plans other models for its all-electric future, but that doesn't mean it's not an impressive car. The i8's $150,000 price tag covers a unique turbo-three engine paired with a battery pack and two electric motors that produce 369 horsepower. The car's progressive design and complicated bodywork contribute to its repair costs and make it far from the cheapest car to insure. It lands at number three on our list. 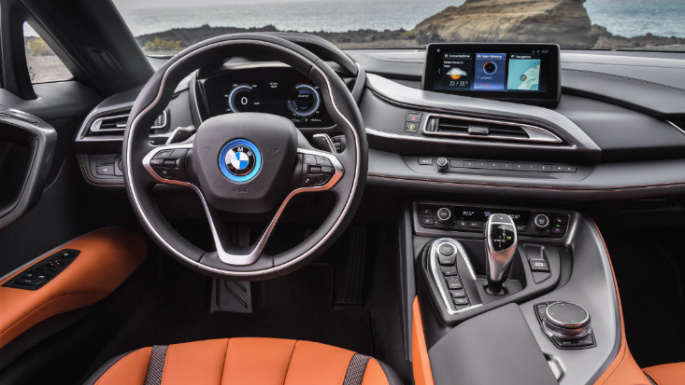 The i8 features only two seats and has almost no room for cargo, but that's not really the point of an over-the-top performance car. Its exotic butterfly doors and powerful drivetrain make it a car that people want to drive fast, and insurance companies are ready with high car insurance rates to cover their risk. 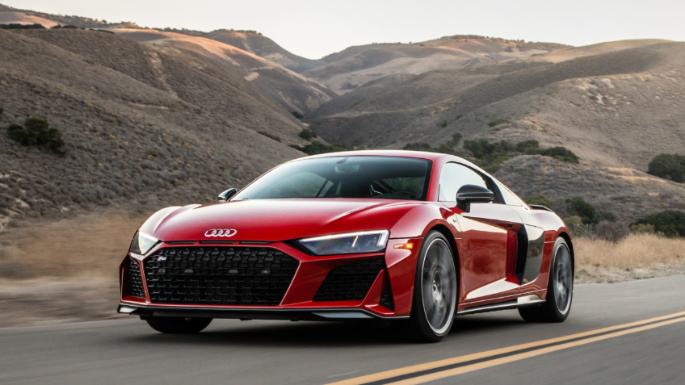 Audi's supercar is a triumph for the brand and has been around for several years now. The car is brutally quick, looks the part of a true supercar, and carries an MSRP that backs up both of those statements. That's why the national average for car insurance premiums on the car places it at number two on the list of most expensive cars to insure. 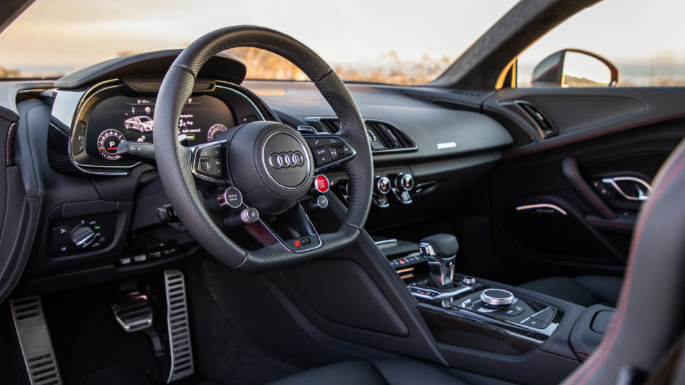 The mid-engined R8 comes with a 5.2-liter V10 engine that absolutely screams, with up to over 600 horsepower sent to all four wheels. The quick coupe is known for its performance, so it's not one that insurance companies are going to look the other way on covering. 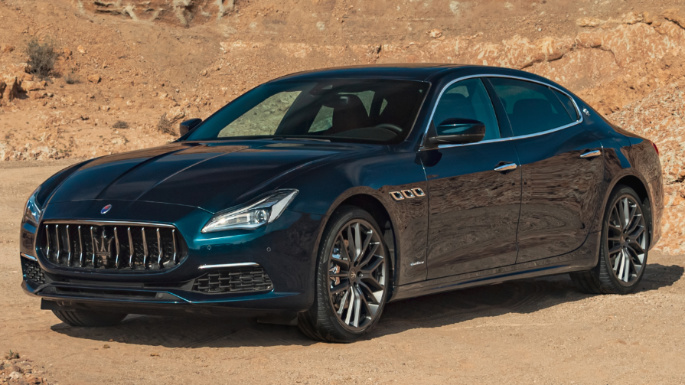 The Maserati Quattroporte is an Italian masterpiece of a sedan and has the impressive performance to back up its ultra-luxe price tag and styling. It's the most expensive car to insure on our list, which is likely due to that price tag and performance. It's probably also due in part to the fact that the car is expensive to repair and not all that common. 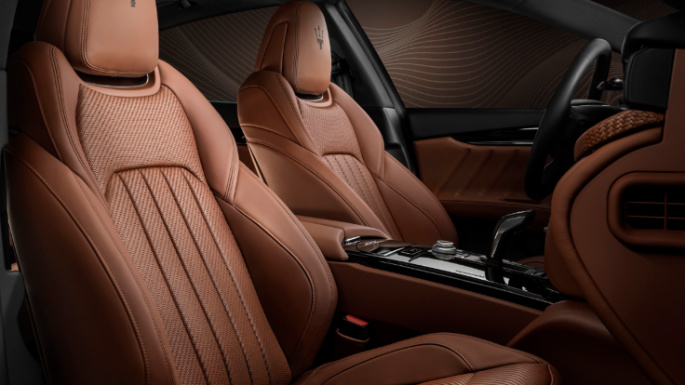 Like the Ghibli, the Quattroporte can be had with a V8 engine that lays down 580 horsepower for a top speed of 203 mph and a 0-60 mph time of just 4.2 seconds. Those are huge numbers for any car, let alone one with four doors and seating for five adults.

What are the cheapest cars to insure?

At the opposite end of the spectrum from the cars above, there are several vehicles that cost a fraction of these to insure. These vehicles are typically far less expensive and do not carry the levels of performance of the exotic and rare vehicles above. We've compiled a list of cheapest cars to insure here.

Vehicles such as the Honda CR-V are a great example. The average cost to insure the CR-V is just over $740 every six months, which is a far cry from some of the rates of the cars above. The CR-V is also a solid vehicle and makes a great minivan replacement for families that don't want to be seen in one.

Car insurance companies also love vehicles such as the Subaru Crosstrek, Chrysler Pacifica, the Toyota RAV4, and others. In some cases, a cheaper vehicle doesn't always mean cheaper insurance rates, for one reason or another. Dodge and Chevrolet are both in that category, as both offer (or recently offered) affordable cars, but neither makes the list of cheapest cars to insure.

What Can You Do To Lower Your Insurance Rates?

Insurance companies look at several factors when making rate determinations, and though the exact methodology differs from company to company, the overarching ideas are the same across the industry. The absolute best thing you can do to lower your insurance rates and keep them that way is to maintain a clean driving record. Speeding tickets, at-fault accidents, citations for driving under the influence, and more are all great ways to end up with painful insurance rates.

Shopping around is another way to lower your insurance rates. Many companies offer incentives and discounts for buying multiple policies, combining car insurance policies with other coverage, such as homeowners insurance, and more. You never know when you're paying too much until you start checking around.

You may be able to lower the amount of coverage you carry on your vehicle, but be aware that you'll be on the hook to pay for any repairs that your insurance does not. This includes property damage and injuries to the other park involved in an accident if you are at fault. This is best for vehicles that are older or that do not need full coverage. You may also find that you are required to carry full coverage insurance on a vehicle that you are financing because the bank wants to be sure that it will recover the money it has tied up in your vehicle if you crash it.

Increasing the amount you are willing to pay for a deductible may help lower your insurance rates as well. If you opt for the lowest deductible possible, it means your insurance company is on the hook for more money if you get into an accident. Since insurers exist solely to make money, they are not excited to let you slide away without paying your fair share. If you opt for a higher deductible plan, you may be eligible for a discount or lower rates, but be aware that you'll have to shell out more cash if you get into a wreck.

Finally, you can keep your car insurance rates low by selecting a vehicle that is reasonably priced, and that comes with a good amount of safety features. Car insurance companies look at vehicles with these features and sometimes offer lower rates because of them.

Buying a new car is exciting, and can be one of the most important purchases you make in your lifetime. As you already know, you are walking into an expensive situation with almost any vehicle purchase, and there are costs that you may not be thinking of when you walk onto a dealer's lot. There are sales tax, dealer fees, registration fees, and many other "gotchas" that come along with the car purchase, not to mention local taxes, such as excise taxes or others.

Car insurance is another cost, and it's one that you are not going to be able to get away from. It is illegal in almost all circumstances and in almost all states to drive without car insurance, and the penalties for being caught without it are not worth the money you would save skipping out. The problem is that car insurance rates are all over the map and can vary greatly from place to place and - more importantly - from vehicle to vehicle.

Insurance premiums rely on many factors that include the vehicle owner's driving record, the car's replacement costs or repair costs, the driver's age, and much more.

A 40-year-old male typically pays less than an 18-year-old male, for instance, and one driving the least expensive car will have an annual insurance premium that is less than that of someone driving a brand-new Nissan GT-R. In some cases, an expensive insurance rate can come down to the car's engine size and performance, which are both pretty good indications to the insurance company that the driver is planning on driving fast.