Most Reliable Used Cars for 2021

When determining the reliability of a vehicle many factors are included in the overall score of the vehicle. Different automotive scoring agencies have varying criteria in which they use to arrive at a final reliability score. J.D. Power and Associates use factors such as driving experience, dealership experience, and resale value to determine a vehicle's reliability score.

Consumer Reports utilizes a long list of 17 different trouble areas that they inspect and compile information on over 12 months to determine the mechanical reliability of a vehicle. There are also accompanying safety ratings provided by the Insurance Institute for Highway Safety (IIHS) for most vehicles.

All reliability scores mentioned in this article are based on the J.D. Power and Associates Vehicle Dependability Study (VDS) rating or the J.D. Power Predicted Reliability rating. J.D. Power and Associates utilize a point system of zero to five, with five being the highest reliability rating possible for any vehicle. Below is a list of the 12 most reliable used cars for 2021 and will not include any minivans, compact SUVs, large SUVs, crossovers, or pickup trucks. 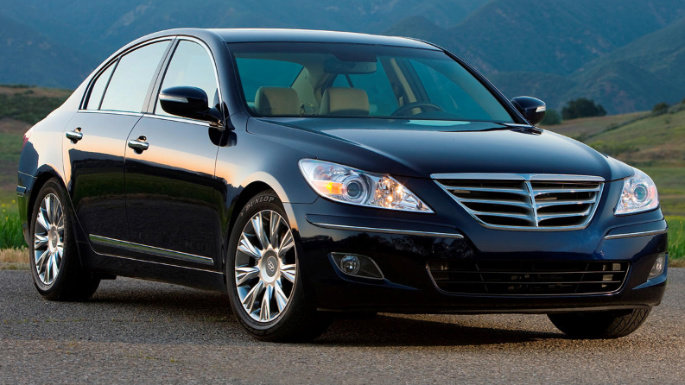 The Hyundai Genesis was introduced to the US market in 2008 and broke onto the scene as a great midsize vehicle offering both luxury and performance. The 2009 model year of the Genesis offered more standard safety features along with more engine options than its previous model year. The 2009 Genesis is a great used car choice as it provides a multitude of benefits for a small price. 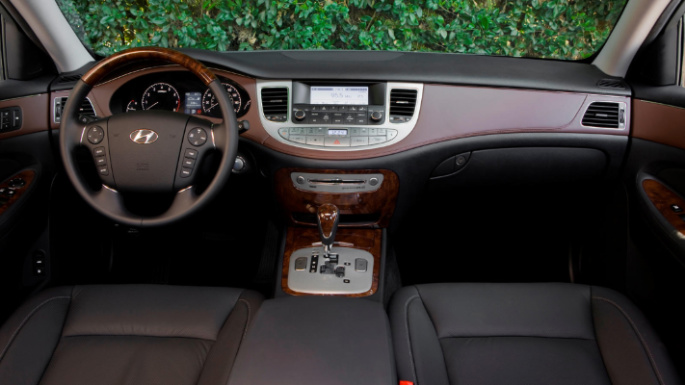 The 2009 model year Genesis is offered in rear-wheel-drive (RWD) only and has multiple engine options ranging from 290 horsepower to 368 horsepower. The Genesis seats five comfortably and has a reliability rating of five points, making Genesis among the best in the midsize luxury car class. The miles-per-gallon (mpg) rating is dependent on engine choice but ranges from 17-18 mpg city and 25-27 mpg highway. 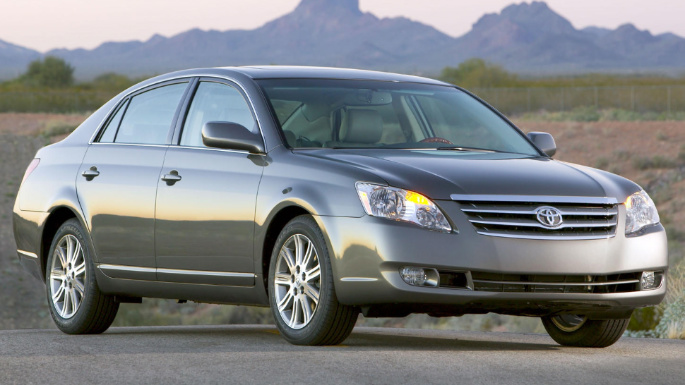 The Toyota Avalon is offered in front-wheel-drive (FWD) and is paired with a single-engine option that produces 268 horsepower. The 2010 model year has a redesigned interior, creating a more comfortable ride and allowing space for five. The Avalon produces high safety scores with an overall IIHS safety rating of "good". Cargo space in the Avalon is limited, however, as the rear seats do not fold down limiting space to the 14.4 cubic foot trunk. 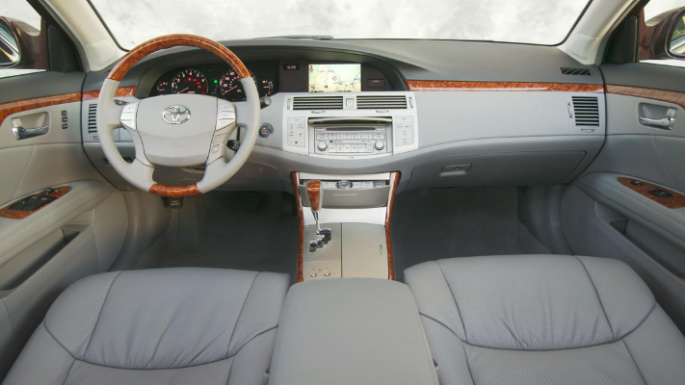 The Avalon has an overall reliability rating of five points, making it among the best in the large car class. The engine offered in the Avalon is fuel-efficient offering 19 mpg city, and 28 mpg highway. With an interior that feels luxurious, and great reliability and safety ratings, the Avalon is one of the best-used cars you can purchase today. The Avalon is comparable to the Chevy Impala in class-leading ratings. 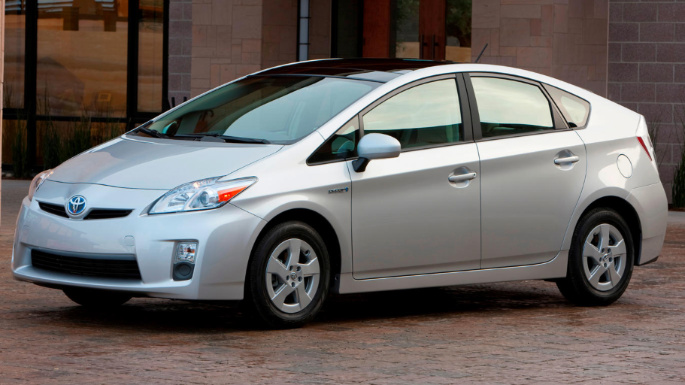 The Toyota Prius is a versatile family vehicle that utilizes hybrid technology to achieve an amazing fuel economy of 51 mpg city and 48 mpg highway. The Prius is offered with an FWD drivetrain with a single-engine option producing 98 horsepower paired with a continuously variable transmission (CVT). The Prius has a spacious interior that allows seating for five and has 21.7 cubic feet of cargo space with the rear seats up. 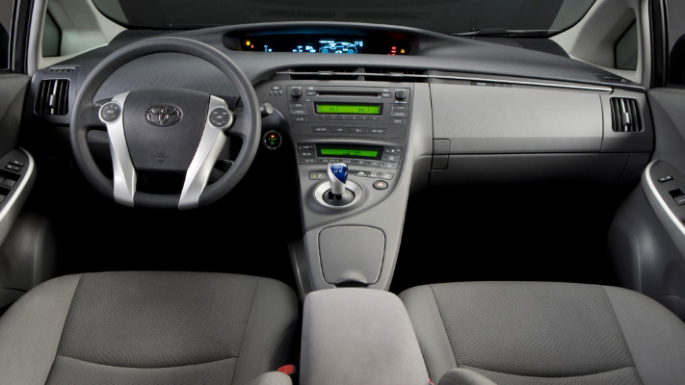 The 2011 model year Prius has a five-point rating making it among the best in the hybrid car class. As far as used vehicles go, the Toyota Prius ages well and have high safety scores to match its top rating in reliability. Pricing for the Prius is a bit higher than others in the hybrid vehicle class, but the Prius is hard to beat as an all-around hybrid vehicle and is nowhere near the price of a Tesla. 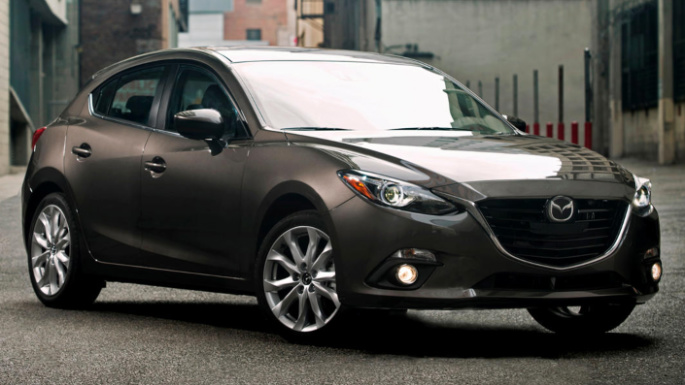 The Mazda3 has sporty handling, great fuel economy, and the 2015 model year sports an upgraded interior. The Mazda3 is offered in both automatic and manual transmission with the manual transmission only offered with the larger engine size. There are two engine choices for the Mazda3 which include the I model which comes equipped with a 155-horsepower four-cylinder engine, and an S model outputting 184-horsepower from a four-cylinder engine. 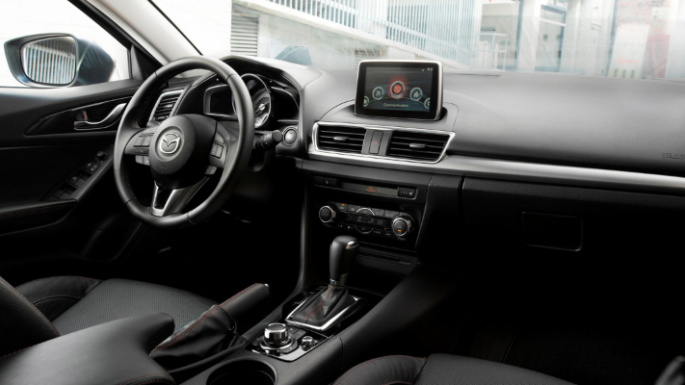 The Mazda3 scores three of five points in reliability, making it average for its vehicle class. The Mazda3 is one of the most fun vehicles to drive in its class and is driver responsive like most sports cars. The Mazda3 seats five and is offered in FWD with a fuel economy of 25-30 mpg city and 35-41 mpg highway. The Mazda3 is comparable to the Infiniti M35 sedan. 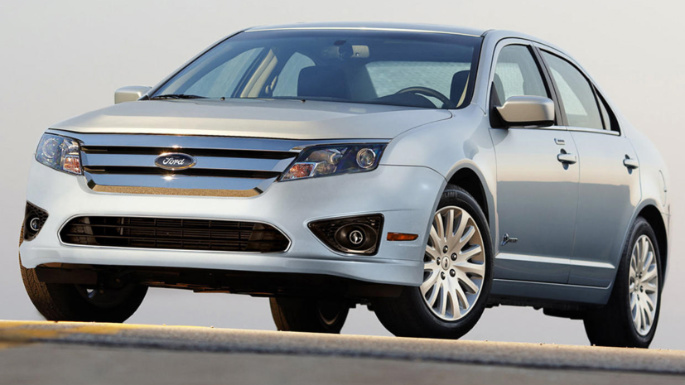 The Ford Fusion is the first vehicle on our list that is offered in all-wheel-drive (AWD) and can also be purchased with an FWD drivetrain. The Fusion offers a spacious cabin, seating five, and a 16.5 cubic foot trunk. The Fusion is offered with both manual and automatic transmissions with three engine choices of a 2.5-liter four-cylinder, a 3.0-liter V6, or a 3.5-liter V6 engine. 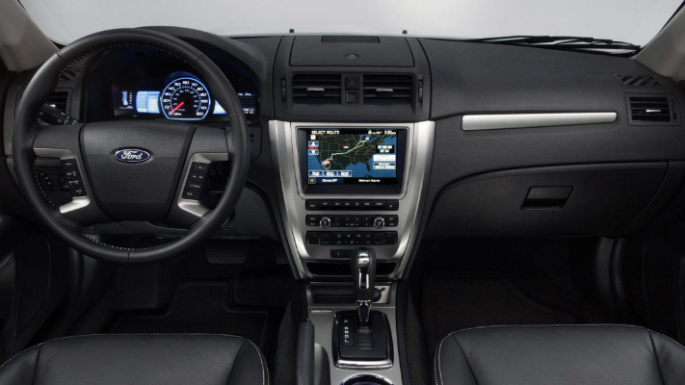 The 2010 Fusion has a fuel economy range of 17-23 city mpg and 24-34 mpg highway. The 2010 model year Fusion achieves five out of five points in reliability, making the Fusion among the best for reliability in the midsize car segment. The 2010 model year also receives new interior and exterior styling with standard safety features such as six airbags, anti-lock brakes, and electronic stability control. The Ford Fusion is comparable to the Volkswagen Passat. 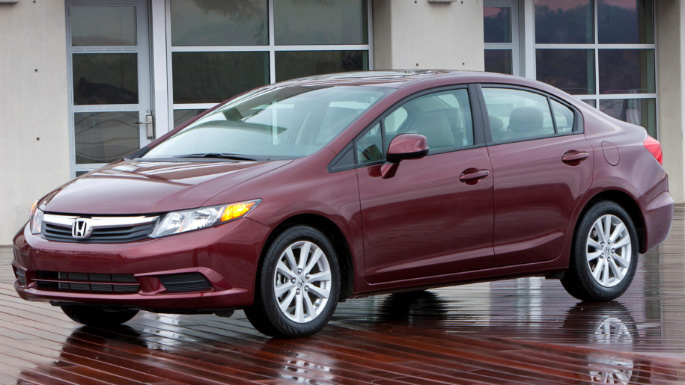 The 2012 Honda Civic was a year in which the Civic was completely redesigned, offering better ride quality, handling, and a more comfortable interior. The Honda Civic seats five and is offered in an FWD drivetrain with two powertrain options. A standard Civic has a 1.8-liter four-cylinder engine with 140 horsepower paired with a five-speed manual or automatic transmission. An optional Si trim takes the Civic to new heights with its 2.4-liter four-cylinder engine producing 201 horsepower paired with a six-speed manual transmission. 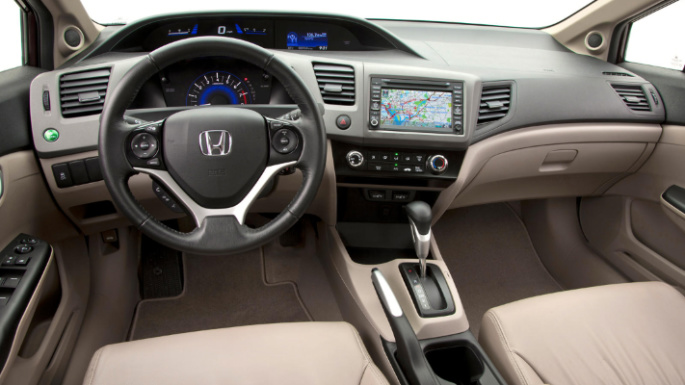 The Honda Civic has a reliability rating of five points, making the Civic among the best in the compact car class. The 2012 model year Civic has a fuel economy range of 22-29 mpg city and 31-41 mpg highway and offered both a sedan and coupe variant. The Civic gained an overall evaluation rating of "acceptable" through the IIHS in the LX trim level. The Honda Civic is comparable to the Buick Verano in the compact car class. 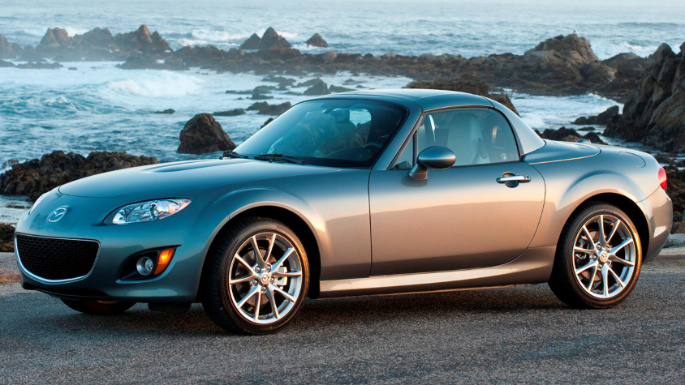 The Mazda Miata is the only true coupe on our reliability list and has been listed as the best-selling two-seat convertible sports car in the world. Mazda has outsold other sports car companies with the Miata to include the likes of Porsche. The 2010 model year Miata is offered in either convertible or coupe variants and is equipped with an RWD drivetrain. The Miata is directly comparable to the Nissan 370z of the same model year with both vehicles scoring five of five points in reliability making them among the best in their class. 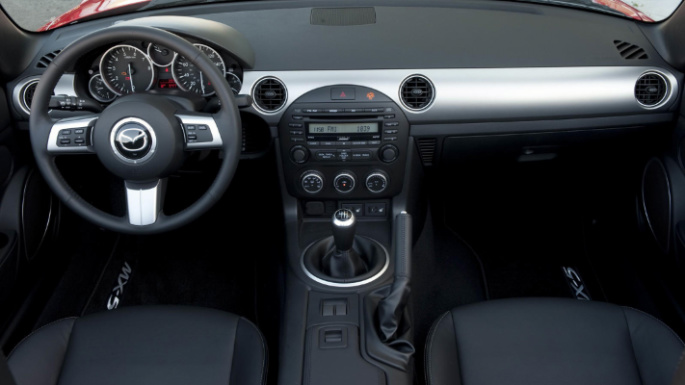 The Miata is only known as a Miata in the North American market as the MX-5 model name is the international reference to the Mazda MX-5 Miata. The Miata is offered with a 2.0-liter four-cylinder engine standard, producing 167 horsepower when paired with a manual transmission or 158 horsepower with an available six-speed automatic. Trim levels offered for the Miata consist of a Sport trim utilizing a five-speed manual transmission with a six-speed manual transmission standard on the Touring and Grand Touring models. The Miata has decent fuel economy ratings achieving 21-22 mpg city and 28 mpg highway. 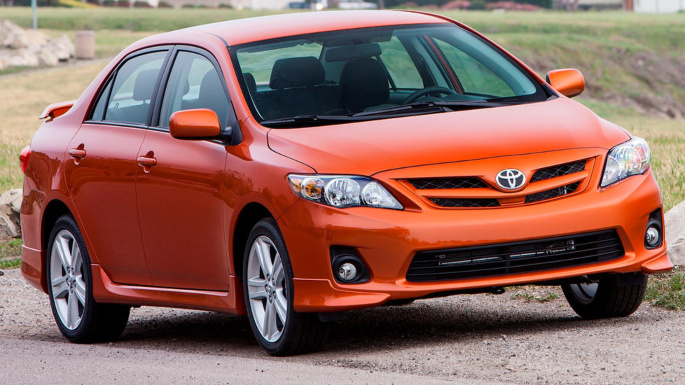 The 2012 Toyota Corolla has great safety scores and is listed as one of the most affordable small cars of 2012. The Corolla receives a reliability rating of four of five points, making the Corolla better than most in its class. The Corolla is a step behind, however, in safety and reliability than its bigger brother the midsize Toyota Camry. The Corolla offers seating for five and an FWD drivetrain that is paired with a four-cylinder engine producing 132 horsepower. 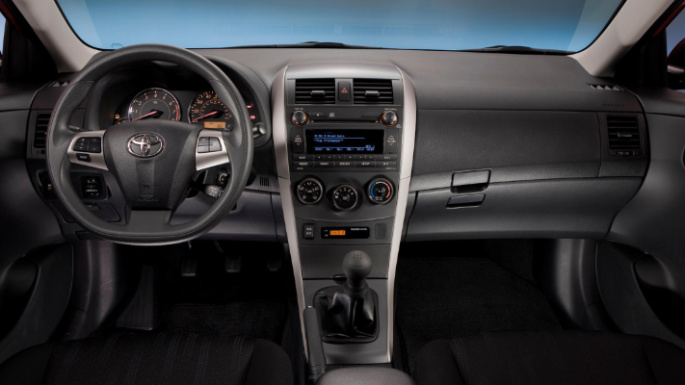 The 2012 model year Corolla has a fuel efficiency rating of 26-27 mpg city and 34 mpg highway. The interior of the Corolla is lacking in comparison to other vehicles in the small car class such as the Chevrolet Cruze or the Ford Focus. The Corolla does, however, outperform both compared vehicles in reliability and price. 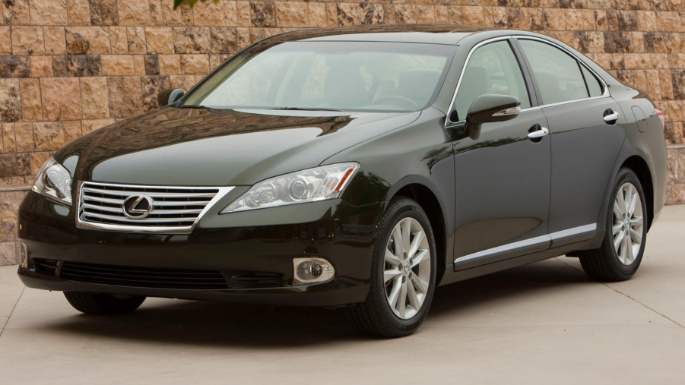 The Lexus ES is a midsize luxury car that offers many of the same features that you would find in a new car today. The Lexus ES offers seating for five and is offered only in FWD paired with a single-engine choice of a V6 engine producing 272 horsepower. The Lexus ES is comparable to the Acura TL in size and features but outperforms the Acura in reliability. The Lexus ES has a reliability rating of five points, making it among the best in its class. 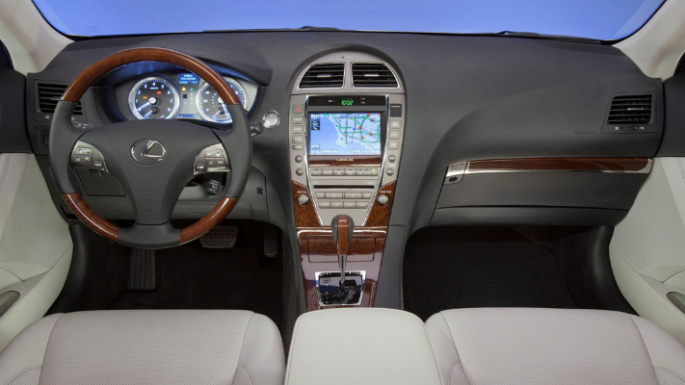 The Lexus ES achieves a fuel economy rating of 19 mpg city and 27 mpg highway. The interior of the ES is luxurious, utilizing premium materials and creating a quiet and comfortable cabin. Standard features of the ES include a power sunroof, power-adjustable front seats, dual-zone automatic climate control, push-button start, Bluetooth, satellite radio, and an eight-speaker stereo with a USB port. Cargo space in the ES is 14.8 cubic feet allowing for quite a bit of luggage capability. 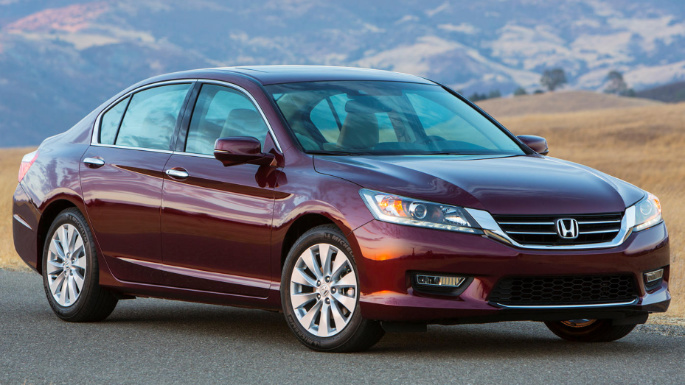 The Honda Accord was fully redesigned in the 2013 model year, making improvements on both interior and exterior features. The cabin of the Accord is more comfortable and made with higher quality materials than the Accords of the past. Sportier handling is now standard in the Accord while still maintaining great fuel economy. The Accord seats five and is offered with an FWD drivetrain and engine options ranging from 185 horsepower to 278 horsepower. 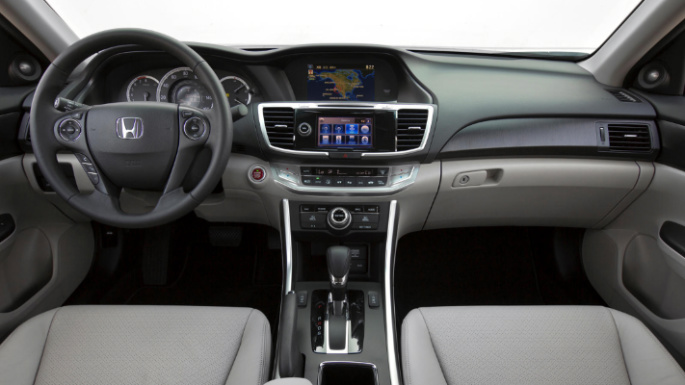 The Accord only scores three of five points in reliability making it average among its vehicle peers. The Honda Accord's fuel economy differs based on the engine but has a range of 18-27 mpg city and 28-36 mpg highway. The Accord is offered in five main trim levels the LX, Sport, EX, EX-L, and Touring trims. The Accord is comparable to other midsize cars such as the Kia Optima. 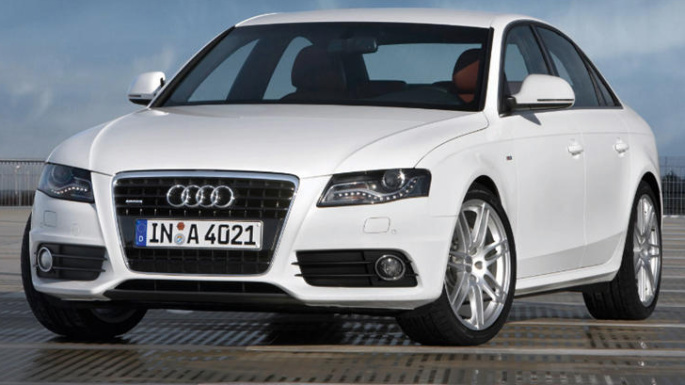 The Audi A4 has a high-quality interior and is powered by a strong four-cylinder turbo engine that produces 211 horsepower. The A4 is offered in either FWD or AWD and achieves a fuel economy rating of 21-22 mpg city and 29-31 mpg highway. The A4 is a part of the small luxury car class and has a reliability rating of three and a half points of five making the A4 better than most other vehicles in its class. 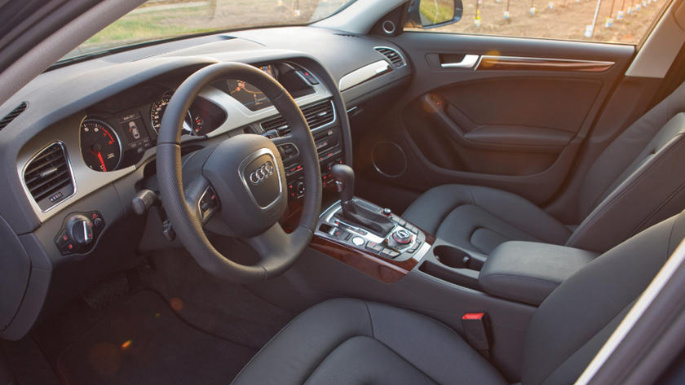 The A4 is comparable to the BMW 3-series and the Mercedes-Benz E-class but outscores them both in reliability. The 2012 model year Audi A4 comes standard with a sunroof, automatic climate control, leather upholstery, power-adjustable front seats, a 10-speaker stereo, satellite radio, and Audi’s MMI infotainment system with a 6.5-inch display. 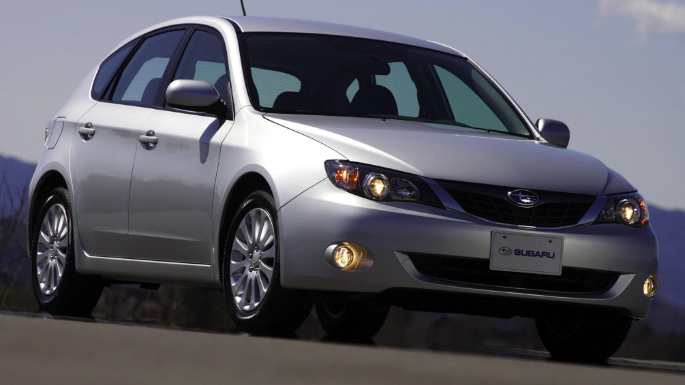 The Subaru Impreza is equipped with AWD standard and offers a hatchback variation allowing for more cargo space. The Impreza has great safety scores and has a comfortable and spacious back seat. With seating for five, the Impreza is offered with a single-engine option of a 2.5-liter four-cylinder engine producing 170 horsepower. The powertrain combination in the Impreza allows for a fuel economy rating of 20 mpg city and 26-27 mpg highway which is impressive for an AWD system. 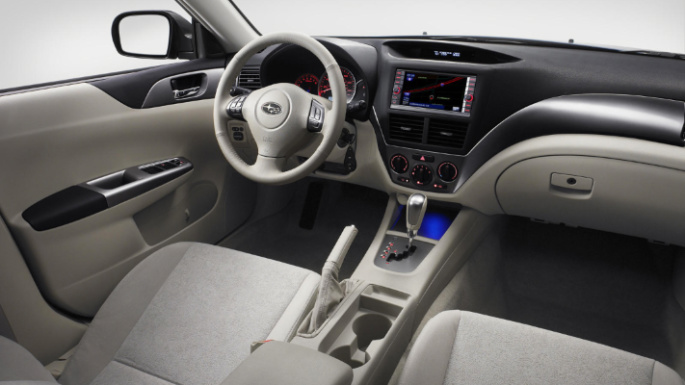 The 2011 model year Impreza has a reliability rating of four out of five points, making the Impreza better than most in its class. The standard Impreza is a bare-bones offering from Subaru but can become an entirely different vehicle if you choose the WRX or WRX STI variations of the Impreza.