These Are The Most Reliable Used SUVs for 2022

Purchasing a new-to-you SUV is costly right now, with used car prices at all-time highs. Picking an SUV or crossover with a reputation for reliability helps to keep the long-term cost of ownership under control. We have compiled a list of the 15 most reliable SUVs to help make sure the investment of a used car purchase isn't wasted in a puff of smoke or a roadside oil puddle.

This list of the best used SUVs for reliability includes compact crossovers, midsize SUVs, and even a full-sized luxury off-roader. Most of these models should be readily available on dealership lots, ready for a test drive, and have a long life of trouble-free service. These are 2019 model year vehicles as that is the most recent year eligible for rating by J.D. Power, newer or older vehicles with the same powertrains should have similar reliability. 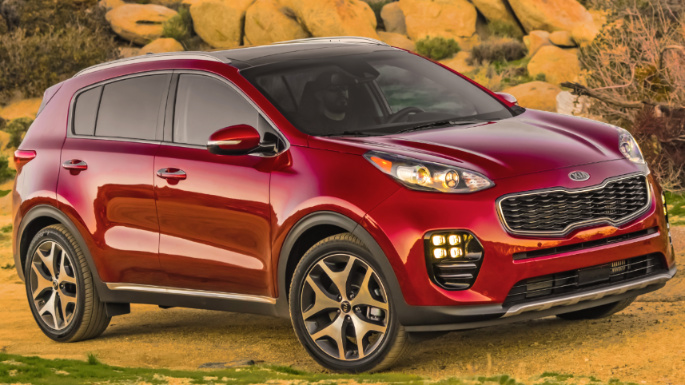 The Kia Sportage is an enjoyable-to-drive subcompact SUV that is also developing a reputation for reliability and ranking first in a J.D. Power dependability survey among small SUVs. The Sportage was lauded at the time for its excellent features and value pricing. A well-equipped model should come at a relatively reasonable price on the used market. 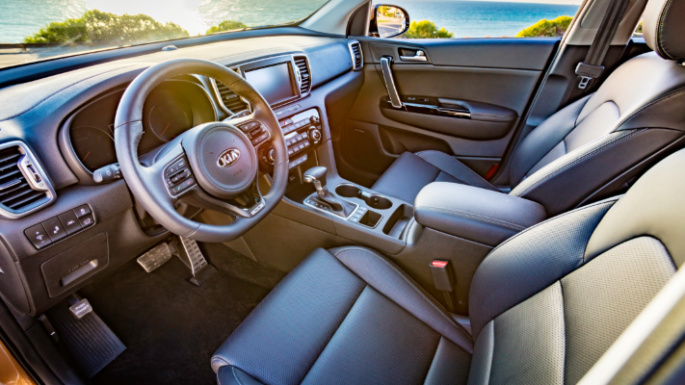 Kia's 10-year/100,000-mile warranty partially transfers to the second owner as well, with a 5-year/60,000-mile powertrain coverage offering a piece of mind should something go wrong. The only knock on the Sportage is its divisive styling.

The standard engine for 2019 is a 2.4-liter four-cylinder making 181 horsepower. This engine delivers acceptable fuel economy of up to 30 mpg highway and 21 in the city.

A more powerful turbocharged engine makes up to 240 horsepower. Both engines are paired with a six-speed automatic transmission, and front-wheel drive is standard, with all-wheel-drive (AWD) an available option.

The related Hyundai Tucson is also well-rated for reliability by J.D. Power. 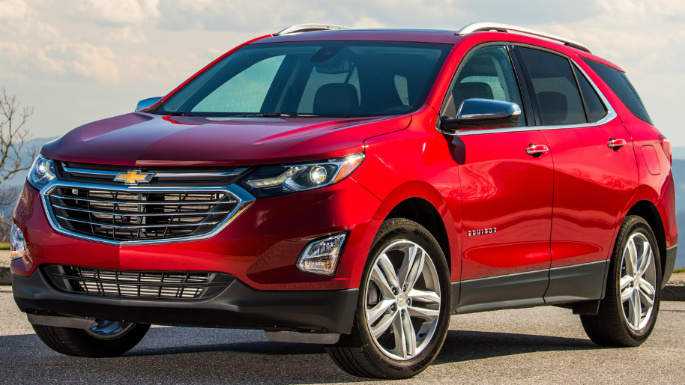 The Chevy Equinox offers a roomy interior, good cargo space, and safety features like blind-spot monitoring, pedestrian detection, and adaptive cruise control. The Equinox also boasts a car-like ride and excellent comfort for the class. However, reviewers found the Equinox painfully slow with the base engine or diesel option. 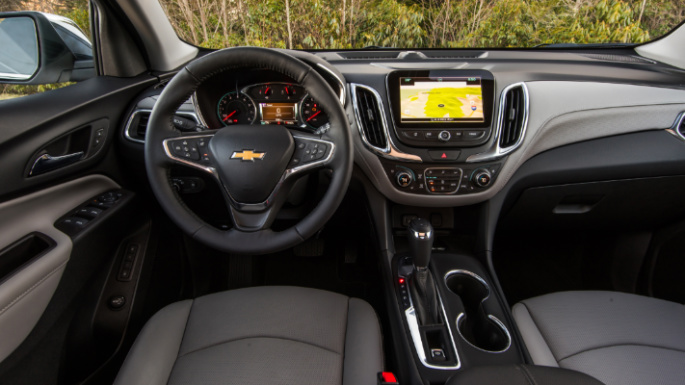 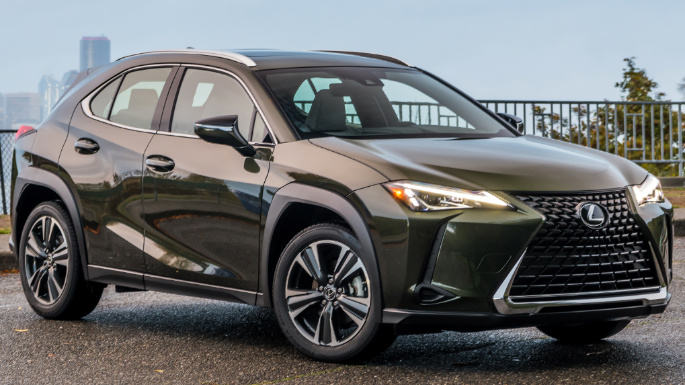 In the small luxury crossover segment, the Lexus UX is the leader in reliability, besting the likes of the Mercedes-Benz GLA and Volvo XC40. It also packs a lot of value for the money with standard features like Bluetooth connectivity, Apple CarPlay, and a suite of actives safety technology that would have been a costly option on a contemporary BMW. The UX also offers a more luxurious feel than comparable models from German luxury brands. 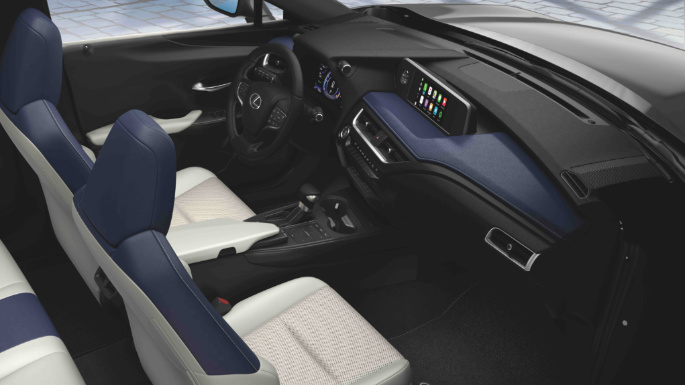 The UX 200 was equipped with a 2.0-liter four-cylinder engine making 169 horsepower, paired with a continuously variable automatic transmission (CVT) and front-wheel drive. A gas-electric hybrid powertrain propels UX 250h models with 181 horsepower, also paired with a CVT and available with AWD. Both engines deliver good fuel economy, with the UX 250h offering up to 42 mpg combined city/highway. 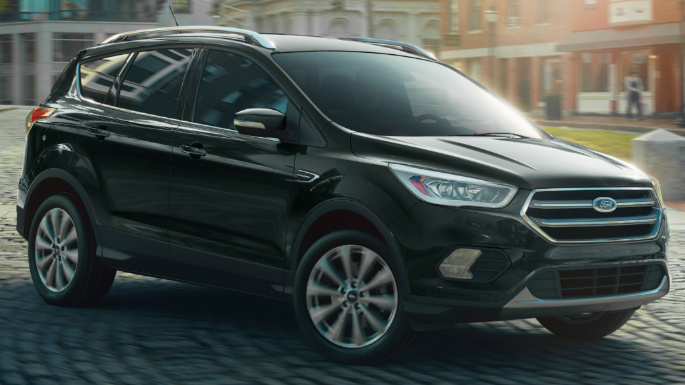 Ford's compact SUV offers a lot to like, including good expected reliability. The Escape delivers a good balance of fun-to-drive thrills and a comfortable ride. Most trims include Ford's Sync 3 infotainment system, which still feels modern today. 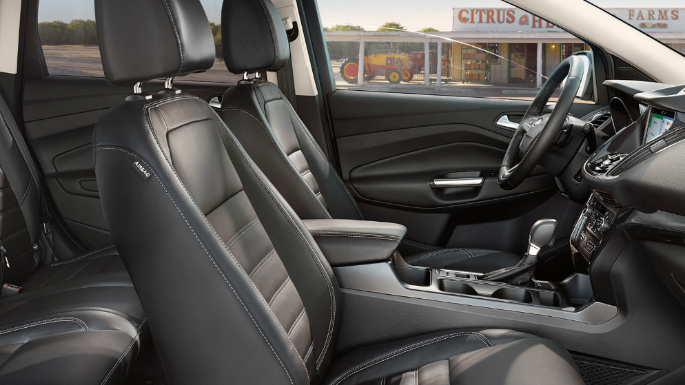 The Ford Escape was the quickest vehicle in its class when equipped with its most powerful engine, making for a pleasant driving experience and power for passing situations. A 2.5-liter four-cylinder engine was standard, a 1.5-liter turbocharged four-cylinder provided the best fuel economy, and a 2.0-liter turbocharged engine delivered thrills with 245 horsepower and 275 lb-ft of torque.

All engines were paired with a six-speed automatic transmission. Front-wheel drive was standard, with all-wheel-drive available on SE trim levels and higher. 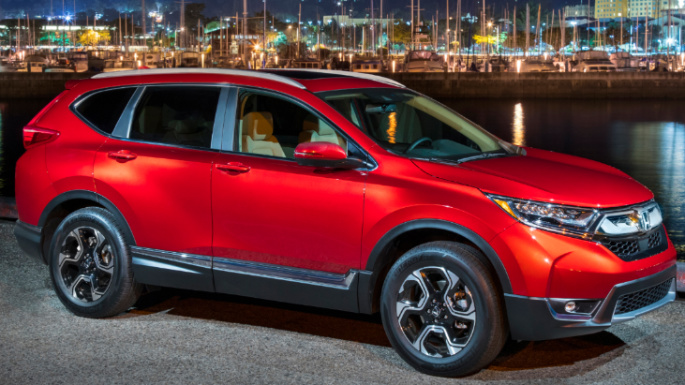 The CR-V is another compact SUV that scores highly for reliability. In addition to excellent expected reliability, this Honda offers a best-in-class interior in space and design, a comfortable ride, and engines with adequate power. The CR-V was such a great all-around car that it topped several publications' lists for best SUVs for 2019. 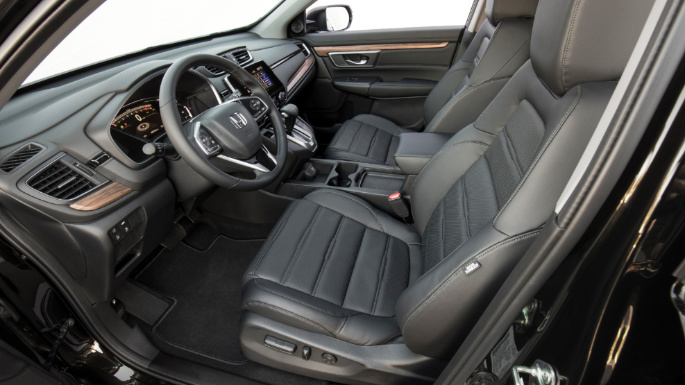 The base engine in the CR-V is a 2.4-liter four-cylinder with 184 horsepower, while a more powerful turbocharged 1.5-liter four-cylinder engine is rated at 190. Both engines are paired with a CVT and standard front-wheel-drive or optional all-wheel-drive. The CR-V is very fuel-efficient with either engine, with EPA estimated highway fuel economy ranging between 31 and 34 mpg. 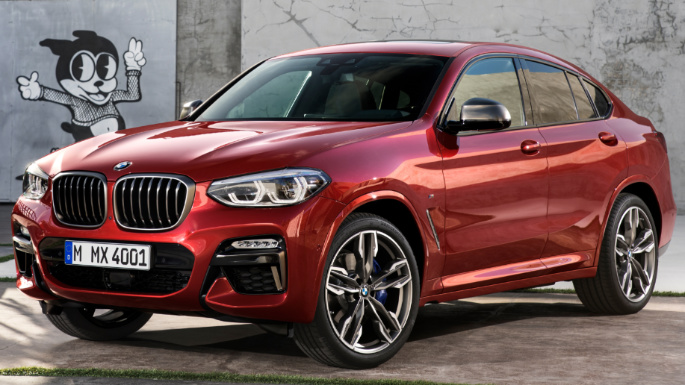 The BMW X4 tops the reliability score in J.D. Power's most recent rankings for compact luxury SUVs. Keep in mind these are based on cars that are three years old, but J.D. Power claims this is a strong indicator of long-term reliability. 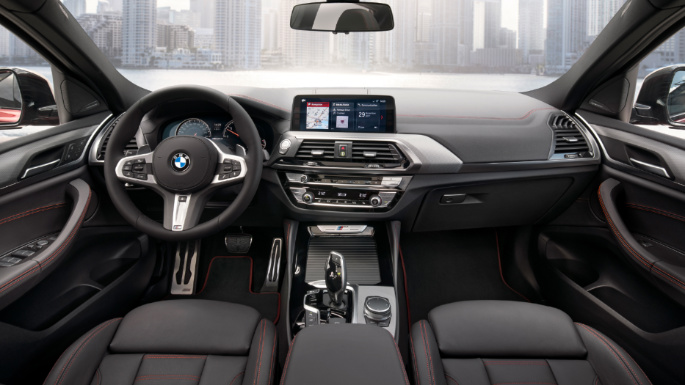 Two engine options were available, both paired with an eight-speed automatic transmission and all-wheel-drive. The base engine is a 248-horsepower, turbocharged 2.0-liter four-cylinder, and the upgraded motor is a 3.0-liter turbocharged six-cylinder with 355 horsepower. The smaller engined X4 received EPA estimated gas mileage of 29 mpg highway and 22 city while the six-cylinder rated at 27 highway and 20 city. 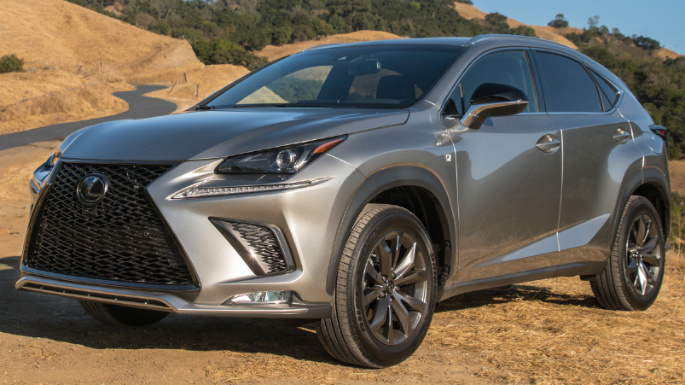 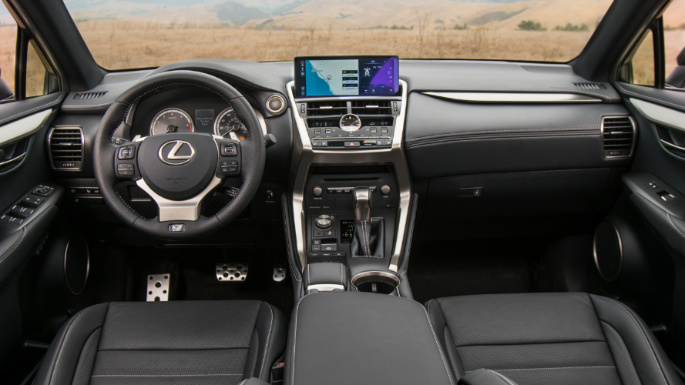 The NX 300 uses a 235-horsepower turbocharged 2.0-liter four-cylinder paired with a six-speed automatic and front-wheel-drive, though AWD is optional with this engine. In addition, a hybrid version is available as the NX 300h with a 2.5-liter engine and electric motors combining for 194 horsepower with standard all-wheel-drive. The hybrid gets excellent fuel economy, rated at 33 mpg in the city and 30 on the highway. 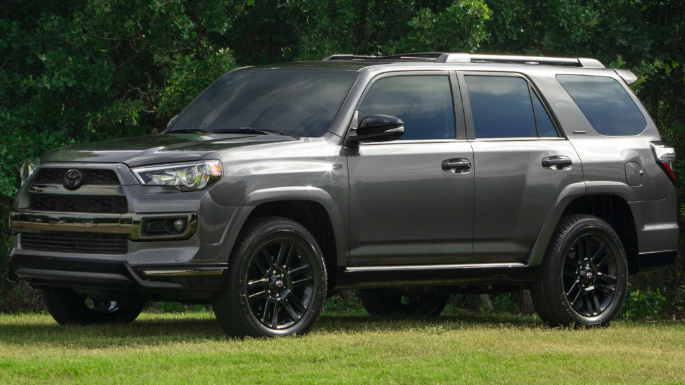 The Toyota 4Runner has a longstanding reputation for reliability with a consistent formula of a proven drivetrain and high build quality that's allowed it to be on this list year after year. However, it's also a drawback, as the 4Runner isn't the most refined vehicle in the class. The old-school pickup truck-based design offers more towing and better off-road prowess than the competition but also suffers from poor ride quality and lackluster fuel economy compared to the more modern competition. 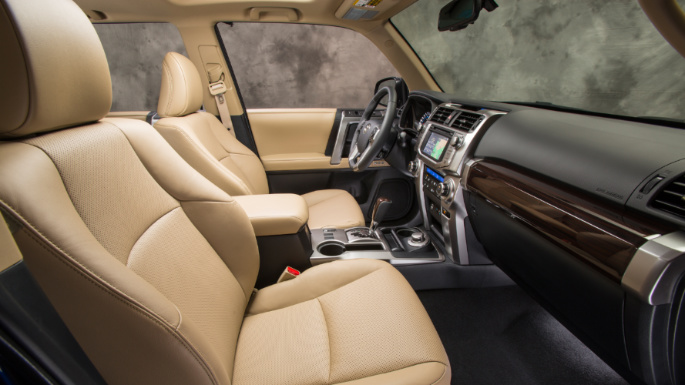 But for buyers looking for a reliable off-road SUV, the 4Runner is the top option thanks to the time-tested and rugged mechanicals. It's consistently ranked as a vehicle most likely to reach the 200,000-mile mark, though it did not fair well in J.D. Power's most recent rankings.

All 2019 4Runners are powered by a 4.0-liter V6 engine paired with a five-speed automatic transmission. This engine makes 270 horsepower and 278 lb-ft of torque. Rear-wheel drive is standard, but many models are equipped with part or full-time four-wheel drive. While fuel economy is poor at 17 mpg city and 20 on the highway, it's on par with one of its prime rivals, the less reliable Jeep Wrangler. 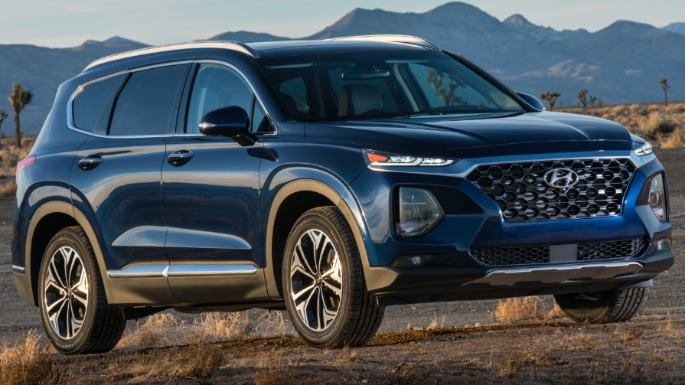 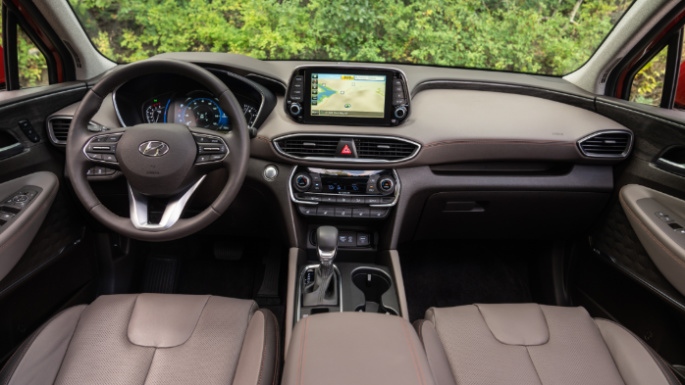 Standard power comes from a 2.4-liter four-cylinder engine making 185 horsepower, and an optional 2.0-liter turbocharged four-cylinder upped performance with 235 horsepower. Either engine is paired with a smooth-shifting eight-speed automatic transmission. Front-wheel drive was standard, with all-wheel drive an option. 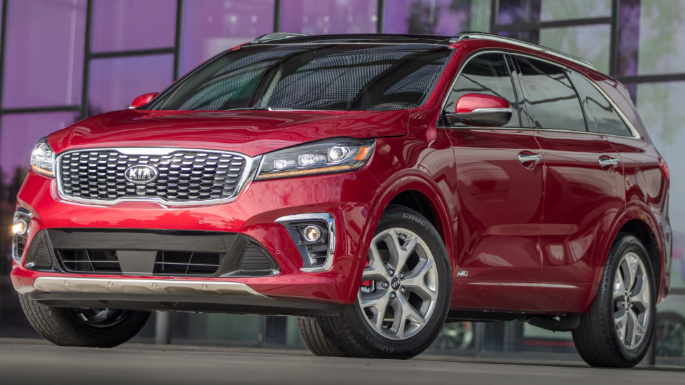 The Kia Sorento offers seven seats in a relatively small package, though it is a tight squeeze in the third row for adult passengers. Reviewers found the driving experience of the Sorento to be fairly sedate with limited steering feedback but allowing for a comfortable ride. Standard equipment is competitive in each trim level, and higher trims are near-luxury in materials and comfort. 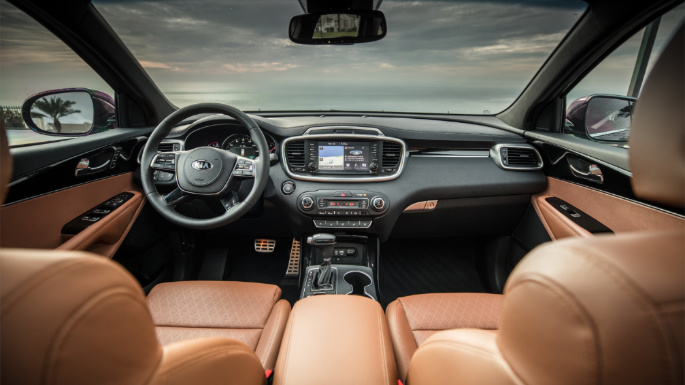 The base drivetrain is a 185-horsepower 2.4-liter four-cylinder paired with a six-speed automatic. But the optional 3.3-liter V6 pairs with an eight-speed automatic and is a better match for the Sorento's size and potential carrying capacity. 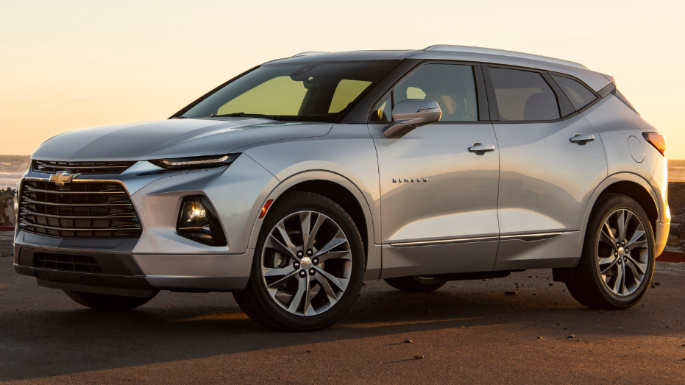 The Chevy Blazer's sporty looks are backed up by its overall driving experience and also received high marks for rear seat comfort. It was an all-new model for 2019, but so far has scored well in reliability. The Blazer offers exciting handling, quick acceleration, and confident braking, making it an excellent choice for enthusiastic drivers. 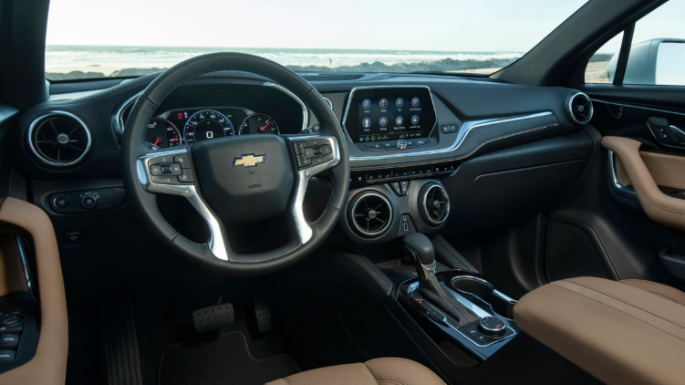 The base engine for the revitalized Blazer is a 2.5-liter four-cylinder with 193 horsepower, paired with a nine-speed automatic and front-wheel-drive. But the engine to get is the 3.6-liter V6 with 308 horsepower and optional all-wheel-drive. Base models get an EPA estimated 22 mpg city and 27 highway, which is about average for the class. 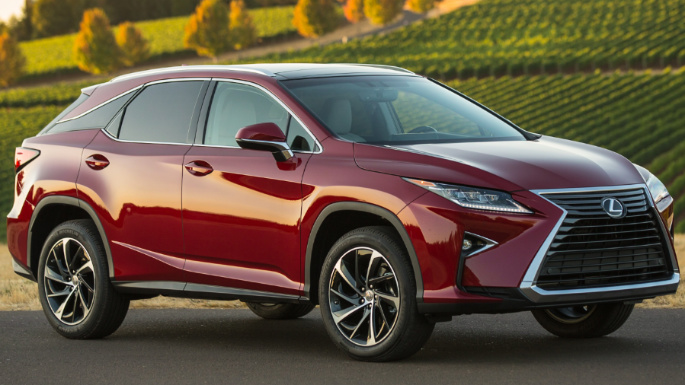 Given its popularity and longevity, it may not be surprising that the Lexus RX leads the midsize luxury SUV segment for reliability. And the RX also offers a smooth ride and excellent driver assistance tech. Automatic emergency braking, lane-keeping assist, and adaptive cruise control are all standard. So it's unfortunate that the RX's infotainment system is fussy to use and behind the times. 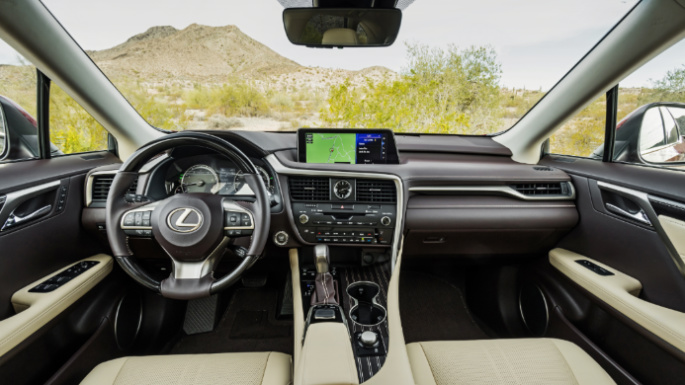 The RX was also selected as a Top Safety Pick by the Insurance Institute for Highway Safety for 2019. And a larger version of the RX is also offered with three rows of seats, designated as the RX L and available with the same powertrains.

RX 350 models are equipped with a 3.5-liter V6 making 295 horsepower, with standard front-wheel-drive and available all-wheel-drive. Hybrid RX 450h models get a combined horsepower rating of 308 from the V6 engine and two electric motors, including standard AWD. In addition, the RX 450h is rated at an EPA-estimated 28 mpg highway and 31 city, while even the lowest-rated AWD RX350 gets a respectable 26 highway and 23 city. 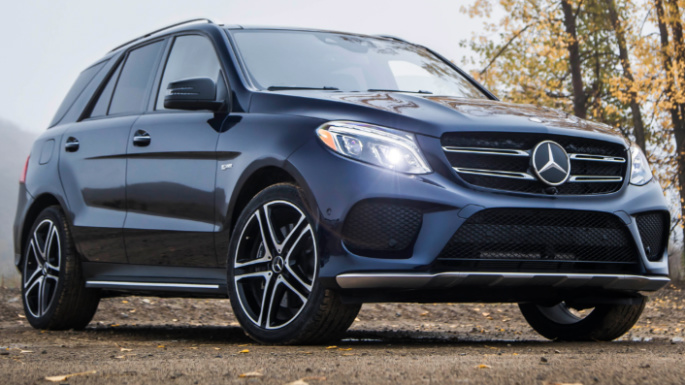 The 2019 Mercedes-Benz GLE was nearing the end of its generation but still offered traditional luxury and comfort amenities in keeping with the brand, its price, and stature among luxury SUVs. And as a plus, it's among the most dependable. 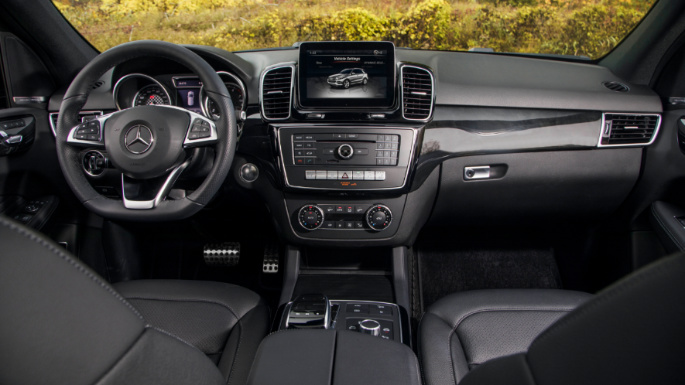 Most models used a twin-turbo 3.0-liter V6 with 329 horsepower and either rear-wheel-drive or 4Matic all-wheel-drive. A plug-in hybrid was offered but rarely seen. According to the EPA, the fuel economy is below average for the class with 23 mg highway and 17 city. And the GLE 63 and GLE 63 S are high-performance versions from Mercedes' tuning division, AMG, which do worse in the fuel economy department but offer blistering speed. 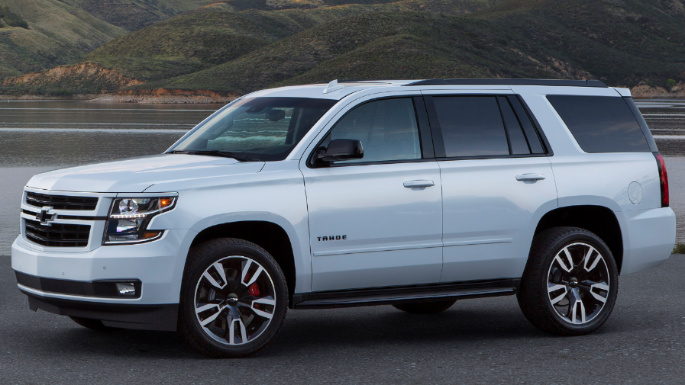 Topping the full-size SUV segment is the Chevy Tahoe, which grades well for interior space, a quiet, comfortable ride, and trucklike towing and utility. However, the Tahoe was expensive when new and likely will command a high price on used car lots. Standard features include Apple CarPlay and Android Auto, remote start, and an 8-inch touchscreen infotainment system, which was well received at the time. Despite its large size, the Tahoe offers light steering, making driving less intimidating in tight spaces. 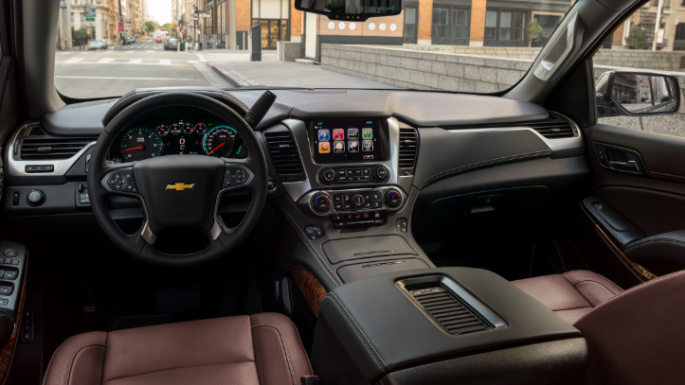 Two V8 engines are available for the Tahoe. The entry-level engine is a 5.3-liter V8 making 355 horsepower paired with a six-speed automatic transmission. A massive 6.2-liter V8 is offered on higher trim levels, makes 420 horsepower, and is paired with an impressive 10-speed automatic transmission. With available seating for up to nine and a max towing capacity of 8,600 pounds, the Tahoe is the ultimate SUV for families who need to haul a trailer. 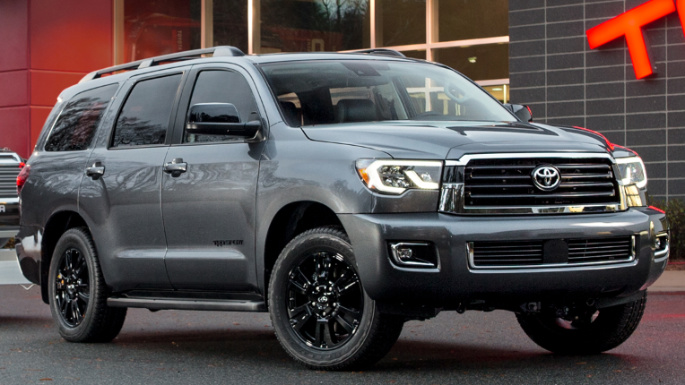 The Sequoia was praised for its adult-compatible third-row seat, off-road prowess, and standard safety features. But even in 2019, the Sequoia was dated, and it showed, particularly in fuel economy and outdated interior materials and design. 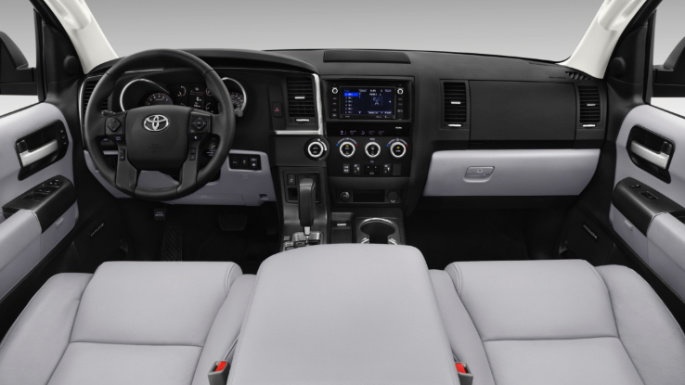 Automated emergency braking, blind-spot monitoring, and adaptive cruise control are all standard driver assistance features. However, infotainment technology is disappointing, with a small 6.1-inch touchscreen display and no Apple CarPlay or Android Auto.

All 2019 Sequoias are powered by a 5.7-liter V8 engine making 381 horsepower and a six-speed automatic transmission. Rear-wheel-drive came standard with four-wheel drive optional. And the fuel economy was dismal, with an EPA-estimated 17 MPG highway and 13 city on every version.