Minivans and three-row crossover SUVs have been aiming for the same buyers for years. But SUVs eventually won out because of their looks and available all-wheel-drive. Front-wheel-drive minivans, however, still win over people who value practicality over looks because of their space-saving side doors that slide and space-efficient interiors.

For many, though, there is no substitute for the peace of mind that all-wheel-drive brings when snow and ice become a factor or when winter tightens its grip.

What many three-row SUV buyers might not know is that there are new and used options for minivans with all-wheel-drive. They incorporate the space of the minivan and that added traction for certain situations — one even comes as a hybrid with up to 35 mpg.

All-wheel-drive minivan prices range from $3,000 for a used model to over $50,000 for the newest models with the latest in minivan technology to keep drivers and passengers happy. 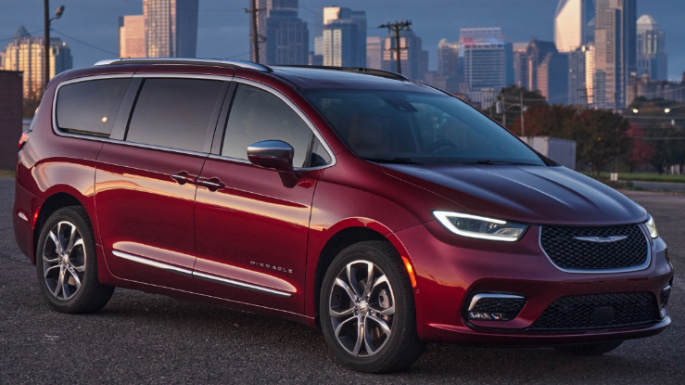 A few 2020 Pacificas were released as the AWD Launch Edition, which was the only way to get the system at the time. But for 2021, all-wheel-drive was available on every gasoline-powered Pacifica, and standard on the higher-end Limited and new Pinnacle models. These models come with a new front-end design that separates the Pacifica from the less expensive Chrysler Voyager minivan, as well as update a look that has been around since the 2017 model year when it replaced the long-running Chrysler Town & Country. All models get a vast 10.1-inch touchscreen with an updated UConnect 5 infotainment system that incorporates built-in Amazon Alexa commands and wireless Apple CarPlay and Android Auto, among other features. The new top-of-the-line Pinnacle model includes quilted leather upholstery, an enlarged front-row center console, and pillows for second-row passengers that do a respectable interpretation of a high-end Mercedes-Benz. 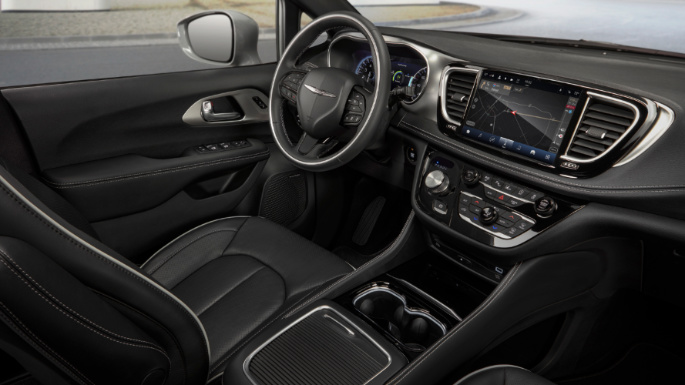 But every Pacifica AWD minivan comes with the signature Stow ‘n Go seating system that allows both the third-row bench and second-row captain’s chairs to fold into the floor, which means the end of lugging any heavy seats out of the minivan to create more interior space. But even with all of the seats in place there is room for up to seven passengers and their luggage, as well as two large covered spaces under the second-row floor. A 3.6-liter V6 engine with 283 horsepower and nine-speed automatic transmission powers every Pacifica AWD. And all 2021 models include full-speed automatic emergency braking with pedestrian detection, lane departure warning with lane-keep assist, adaptive cruise control, automatic high beam assist, and rain-sensing wipers.

All-wheel-drive adds about $2,900 to the price of a Pacifica Touring and Touring L, while it’s standard on Limited and Pinnacle models. A 2021 Chrysler Pacifica with all-wheel-drive starts from $39,685 to $54,885. The Pacifica is also available as a plug-in hybrid, but that model is front-wheel-drive (FWD) only. 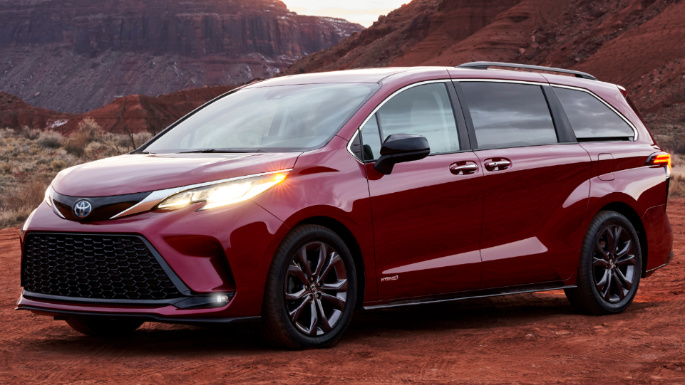 Long a popular three-row vehicle, the Toyota Sienna received some of the most dramatic changes in more than 20-year history. Apart from striking new styling, all Siennas are now gas-electric hybrids. Using a similar 243-horsepower, 2.5-liter engine, two electric motors, and continuously variable transmission (CVT) as other Toyota hybrid powertrains, the all-wheel-drive version added an additional motor to power the rear wheels. Now called “Electronic-on-demand AWD,” it eliminated the need for a large shaft from the front of the minivan to the rear and created more space inside — and boosts fuel efficiency. The Environmental Protection Agency (EPA) estimates fuel economy at 35 mpg combined city and highway, a vast improvement over the previous Sienna AWD and far greater than any other minivan. The hybrid powertrain is covered by a 10-year/120,000-mile warranty. 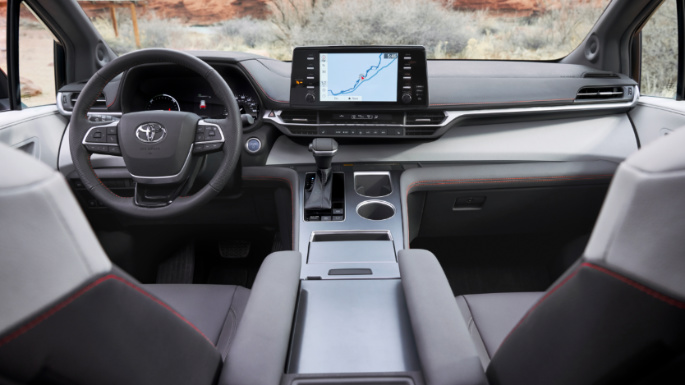 As well as the new hybrid setup, the 2021 Sienna gains a number of new features and solutions. The second-row captain’s chairs on most versions are on extra-long runners for passengers to slide further back when the third-row seats aren't used. On the new Platinum model, those seats turn into ottomans. The console between the front seats includes much more storage for bags and includes a wireless smartphone charger or even a refrigerated compartment. A wi-fi hotspot, rear entertainment system, surround-view camera, built-in vacuum cleaner, and other technology features were also added to the new model. 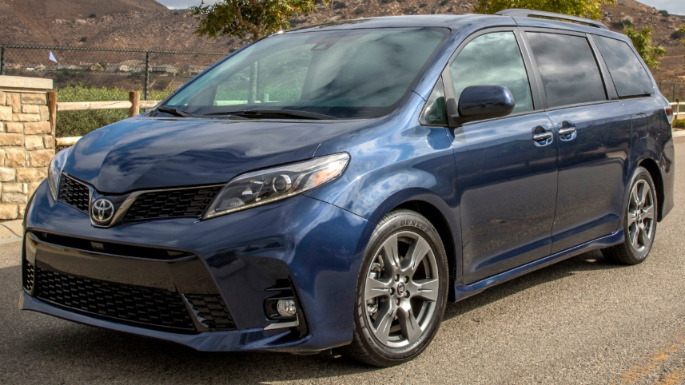 After the successful second-generation model, Toyota revamped the Sienna again for 2011. It didn’t mess with the formula too much, other than adding a slightly more expressive exterior design and new features inside. A panoramic surround-view camera, widescreen monitor for the rear entertainment system, forward collision warning, and keyless entry and start were available, along with lounge-style second-row seats. A sporty SE model with large wheels and an aggressive grille and bumper treatment was also new, but only available with all-wheel-drive in 2019 and 2020. 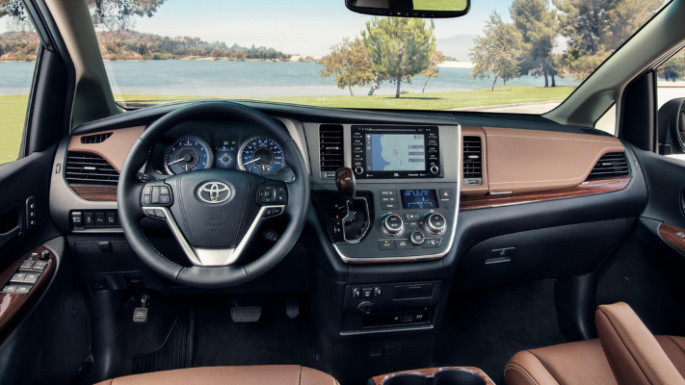 There were several enhancements during the third-generation Sienna’s 10-year run. A 2015 revision included slightly revised exterior styling, redesigned interior storage, and repositioned dashboard controls. In 2017, the 266-horsepower V6 was replaced by a significantly more powerful 296-horsepower version, and the six-speed automatic was replaced by an eight-speed version. But it took until 2018 to add another round of exterior and interior modifications. Also included was the Toyota Safety Sense suite of driver assistance systems, which consisted of automatic emergency braking, adaptive cruise control, automatic high beam assist, and lane-keep assist. 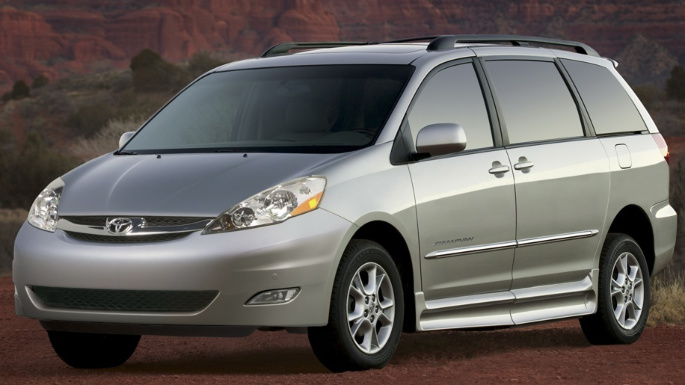 For the second iteration, Toyota upsized the Sienna to the size of rivals like the Honda Odyssey and Dodge Grand Caravan. There was far more space inside, seating for up to eight passengers, and all-wheel-drive. The latter was a rare option for a minivan and set the Sienna apart from the competition. But the Sienna continued to boast excellent safety ratings for its time, and all versions received front, side, and side curtain airbags, as well as the safety features that were modern at the time. Some models even added adaptive cruise control, parking sensors, and a backup camera — all of which would seem dated now. 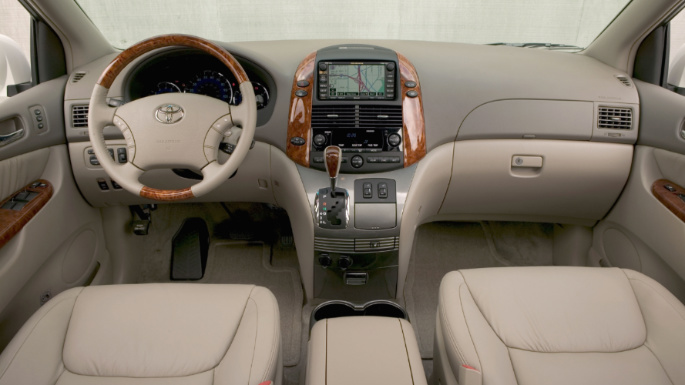 Many models with all-wheel-drive are limited to seven seats with second-row captain’s chairs. They also have run-flat tires that can be expensive to replace. Models from 2007 through 2010 are more desirable because of an upgraded engine with 266 horsepower, up from 230.

Thanks to the automaker's reputation, prices for a used Sienna run a wide range for a used car. Depending on the year, all-wheel-drive was available on all but the base Sienna models. LE models have cloth upholstery and alloy wheels, while XLE and Limited versions are plusher with leather, heated seats, power sliding doors, and (outdated) rear entertainment systems. There aren’t many for sale and the ones that do typically have high mileage, but prices start from about $3,000 to $13,000 at dealerships.