What is Cash for Clunkers? How to Get Cash for Your Car

What is Cash for Clunkers? How to Get Cash for Your Car

Amid the economic upheaval due to the COVID-19 or coronavirus pandemic, your vehicle might throw a lifeline to the auto industry. Now facing double-digit declines in first-quarter sales, automakers are proposing that the feds revive an Obama-era program that helped bolster the auto industry following 2008’s economic downturn: Cash for Clunkers. It was a program that granted car buyers cash to trade low-efficiency, gas-hungry vehicles for more fuel-efficient and low- or zero-emissions models.

If Ford and other proponents get their way, Cash for Clunkers may make a comeback to help save a faltering auto industry while putting cash back in consumers’ pockets. A new program might look similar to the one launched in 2009, so it’s helpful to look at the old Cash for Clunkers government stimulus to get a glimpse of what may be on the horizon.

Will 'Cash for Clunkers' be Revived Because of Coronavirus?

As the federal government struggles to deal with a major health crisis and massive joblessness, it remains to be seen if Cash for Clunkers 2.0 will come to fruition. But there are many in the industry who would likely push for it.

Morgan Stanley automotive anaylst Adam Jonas told Barrons that he expects a more comprehensive Cash for Clunkers-type program to be enacted this fall and that it would stretch into early 2021.

Ford has been the most vocal about its desire for a revival of Cash for Clunkers. A company representative told CNET's Roadshow that it has encouraged Congress to look at ways to stabilize the auto industry while supporting auto industry workers and customers and increasing the demand for new cars. The automaker itself has discussed a national stimulus program internally for the auto industry and current plans to involve the U.S. government in the talks.

Ray LaHood, who was Transportation Secretary in 2009 when the CARS program was rolled out, has voiced his support for a new version of the initiative in light of the toll the coronavirus outbreak has had -- and will continue to have -- on the auto industry.

Prior to the pandemic in 2019, Senator Chuck Schumer brought up the notion of a program like Cash for Clunkers. Under his suggested plan, buyers trading in gas-powered vehicles for fuel-efficient vehicles, including plug-in hybrids, fully electric, or fuel-cell vehicles, would receive from $3,000 to $5,000. If the taxpayer buying an electric vehicle hails from a lower-income tax bracket, then the government would throw in an additional $2,000. 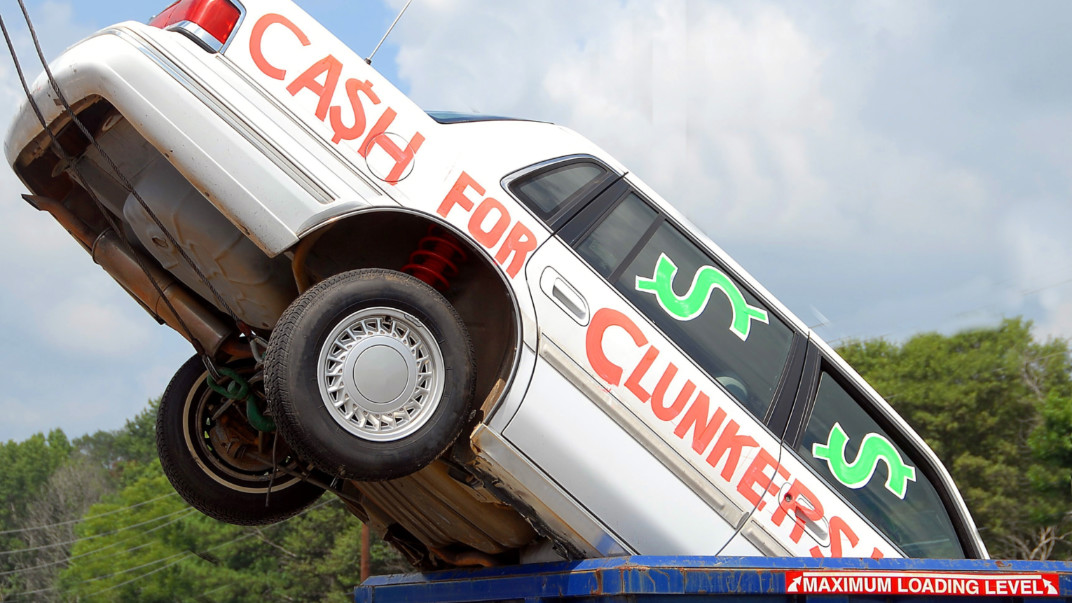 How Did 'Cash for Clunkers' Work?

Cash for Clunkers was the nickname for the government’s Car Allowance Rebate System or CARS. The goal of the program was to encourage consumers to buy new cars to keep the auto industry afloat while also trading in vehicles that were bad for the environment, otherwise known as clunkers. Trading in that old gas guzzler for a fuel-efficient new vehicle garnered the consumer from $3,500 to $4,500 direct from the U.S. government. Additionally, the dealer accepting the vehicle was required to scrap it, and the scrap value gave to the vehicle’s owner. All told, the federal government spent $3 billion to clunker owners.

Which Vehicles Were Eligible for 'Cash for Clunkers?'

To be considered a clunker, the vehicle had to meet the program’s parameters. It must have been previously registered and insured for the year preceding the trade-in transaction. The vehicle could be no more than 25 years old, and the consumer must trade it in on a new car purchase or a five-year-minimum lease with a retail price no greater than $45,000 and with a fuel economy of at least 22 mpg. The clunker had to have a combined average rating of 18 mpg or less, and it had to be in drivable condition.

Did 'Cash for Clunkers Work?'

The design of Cash for Clunkers aimed to help not just the auto industry, but also the dealerships and the end consumer. In all, almost 700,000 older, inefficient vehicles were traded in under the CARS program. Morgan Stanley has estimated that the program -- which cost the U.S. government a total of $3 billion -- generated roughly $13 billion in sales.

In addition to boosting the economy and the auto industry, proponents note, those new vehicles on the road significantly reduced emissions and fuel consumption by the older models they replaced.

The program’s detractors argued it had little effect other than crunching sales for car dealers from July to October of 2009, which is the period in which the program ran. Those sales, they argue, would have happened without the program’s help or the cost to the U.S. taxpayer.

Some car enthusiasts say that it took a lot of desirable older vehicles off the road that were needed for parts or even for collectors.

Regardless, there was a sales boost. As a result, the industry rallied, and the world got rid of a lot of inefficient vehicles, replacing them with fuel-efficient cars.

How to Get Cash for My Car Now

While the auto industry waits to see if Cash for Clunkers gets a reboot, there are other incentive programs out there for consumers who are eager to get rid of their current vehicle.