What is Nappa Leather in Cars?

Nappa leather is a broad and somewhat ambiguous term referring to soft, smooth, often full-grain leather. It's a premium leather often used as a high-grade option in car interiors and promotes a higher-grade extra that raises the ambiance of a vehicle. Once limited to ultra-luxury cars or expensive ones like Porsche, Nappa leather seats are offered by mainstream automakers such as Mazda, and on cars, SUVs, and pickup trucks.

Full-grain indicates that the leather in question still has its textured surface or that the surface is unaltered. As a result, Nappa leather often retains much of its original texture and look and generally feels soft and luxurious.

In addition, Nappa leather is usually dyed for aesthetic reasons. For vehicle interiors, it's often tied to more distinctive color schemes because of the need to alter its appearance with the dyes. Some automakers get ambitious with various browns, grays, and even colors like orange, green, and blue. Nappa leather is also used in furniture, clothing, and fashion accessories like wallets and handbags.

But its appeal in new vehicles is the richness it's supposed to have over lesser quality upholsteries, elevating the premium feel of any vehicle, from the Chrysler Pacifica minivan to a Hyundai Santa Fe SUV even a Ram 1500 pickup truck. Here's what makes this material a cut above.

A Short History of Nappa Leather

Nappa leather refers to the place where it first appeared. In 1875, Emanuel Manasse came up with the name while working at the Sawyer Tanning Company in Napa, California.

At that time, making Nappa leather consisted of vegetable tanning agents and alum salts. Originally used to make high-end and durable gloves that were also able to be dyed in different colors, Nappa leather became a popular material for fashion accessories.

The tanning process hasn't changed much since Manasse's used it for goods. Today, tanners and other manufacturers use salts such as chromium and aluminum sulfate. Then, they dye Nappa with water-soluble colorants, so the finished product retains its vibrant color for many years even when subjected to harsher conditions or sunlight.

Since Nappa leather has an ambiguous meaning in advertising, it can also refer to natural grain or corrected grain leather. The natural grain is another way to say full-grain, and both refer to leather with an unaltered or intact surface.
Corrected grain indicates the opposite. It results from a hide where the surface is removed or buffed. Manufacturers remove or buff the surface for aesthetic reasons. But different types of leatherwork better in other cars, which is partly why Nappa leather isn't in every high-end vehicle.

Like most leather, Nappa leather typically comes from cowhides, but it may also come from sheep, calf, or goat.

But because there is no standardization among the different types of leather, many often appear on the auto market labeled Nappa when the term technically does not apply. That can make it harder to determine whether it's genuine Nappa leather rather than just called that, something that requires an expert. 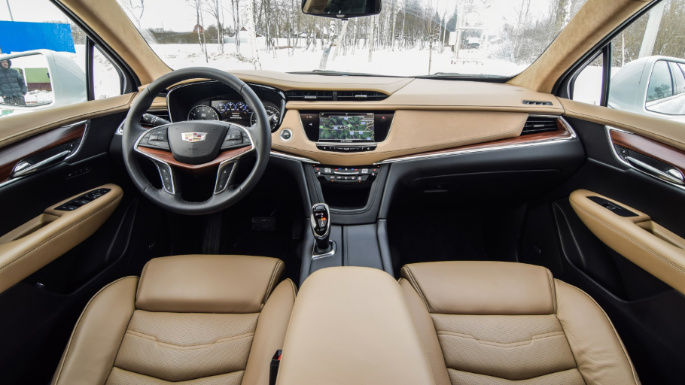 Full-grain has the most densely packed fibers, making it highly durable, which is why it's more likely to be found as a high-end option for trucks and SUVs. Yet despite the dense fibers, full-grain leather is extremely soft to the touch. It is usually expensive and lasts a long time, which makes it appealing for ultra-luxurious models from Mercedes-Benz and Bentley, among others.

Top grain can be confusing because it implies the hide's top layer. But that's not exactly the case. Instead, it starts as full-grain leather, except that the outermost layer is removed through sanding or buffing. That process takes away many of the imperfections. Then, an embossing process artificially restores the look of a full-grain to the top grain leather product. That mainly restores the appeal of full grain leather.

However, because top grain leather loses all of the dense fibrous qualities associated with a full-grain, it loses a lot of the supple quality. It's also thinner and, therefore, more pliable. Yet because buffing alters the grain and the texture of the leather, the natural durability is still there. Therefore, any full grain leather removed or altered by sanding or buffing is automatically called corrected grain.

One of the most significant distinctions is that some corrected grain leather still has most of its full-grain even after it has been processed. That's because the spots of unsightly scars and blemishes have been buffed away. But even full-grain leather that's been sanded and buffed in places is still considered a corrected grain.

Why do automakers make different leather types so confusing?

Therefore, if you're in the market for a vehicle with genuine Nappa leather, trust your fingertips and ask questions. You'll thank yourself in the long run since there are many differences in the ways authentic full-grain Nappa leather and corrected grain wear over time and are cared for, such as with a leather conditioner.

Full-grain leather is very breathable, while it absorbs less moisture and dries quickly despite prolonged exposure to moisture. In addition, full-grain leather tends to brighten and smooth out as it ages, developing a desirable patina that some feel makes it look worn correctly and more attractive.

By contrast, top-grain leather gets a finishing coat making it less breathable than full-grain. And it doesn't age as well as full-grain because it never develops that deep, rich color associated with a well-used full grain upholstery. That's why real Nappa leather has typically only appeared in luxury vehicles or the higher-end versions of mainstream cars. But it isn't the only high-end leather used in automobiles.

Semi-aniline leather and vegetable-tanned are types of leather you're more likely to come across in an Audi, BMW, and Lexus. That kind of leather is usually un-embossed and has a smooth, flat grain. Vegetable-tanned leather is attractive because of its organic tanning process, which preserves more of the hide's original qualities.

These types of leathers all begin as the best hides on the market. The resulting product usually ends up in very high-end luxury vehicles. Rolls-Royce started using this process on the upholstery with the Phantom luxury sedan in 2017.

While other premium materials, such as wool blends or synthetic leather, are starting to replace real leather in Mini and Volvo vehicles, some consumers still associate leather upholstery for car seats with the higher-end model in the line. And for those people, nothing else will do.