The 2022 Hyundai Ioniq 5 is an all-new electric car for the automaker. As such, there are no previous generations to compare to this new car to.

Would we buy one? For sure! 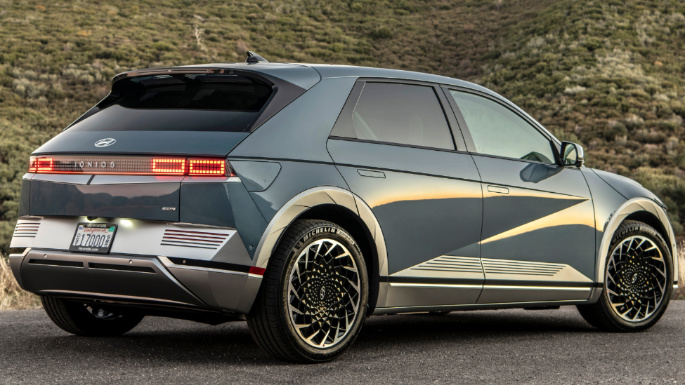 The Hyundai Ioniq 5 is a four-door electric hatchback that is promoted as an electric SUV. It is a completely new vehicle for the automaker, riding on a new modular platform for Hyundai, Genesis, and Kia electric vehicles. You may be familiar with the Hyundai Ioniq, a small Prius-like hatchback available in hybrid, plug-in hybrid, and electric vehicle variants. However, now Hyundai has begun using the Ioniq name as a subbrand for several electric vehicles. The first to debut under the subbrand is the 2022 Ioniq 5, which competes well against the Nissan Leaf, Audi E-Tron, BMW iX, Toyota Venza, Kia EV6, Kia E-Niro, Tesla Model Y, Ford Mustang Mach-E, and Volkswagen ID.4.

The Ioniq 5 comfortably seats up to five passengers, making it a great family crossover for both short and long trips. It has something for everyone with its offer of an easygoing, docile drive in Normal or Eco Mode or a highly responsive and sharp ride in Sport Mode. The 2022 Ioniq 5 responds perfectly to what you need at that moment.

Built on a dedicated EV architecture and completely new platform, the standard-range 58-kWh battery paired with a single, rear-mounted electric motor generates 168 horsepower to power its rear-wheel drivetrain. The long-range 77.4-kWh battery generates 225-horsepower and 258 lb-ft of torque. The all-wheel-drive variant is more powerful, featuring two electric motors with a combined output of 320-horsepower and 446 lb-ft of torque. All powertrains include a single-speed transmission. 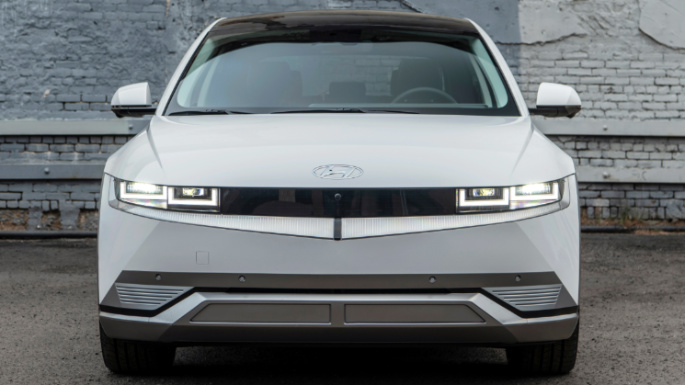 The 2022 Ioniq 5 starts at $39,700, which is one of the highest starting prices in its class. However, to be fair, most of its classmates are hybrids, which are typically cheaper than pure EVs. Compared to EVs like the Volkswagen ID and Tesla Model Y, the Ioniq 5 becomes competitive with a lower starting MSRP. The Ioniq 5 is roughly $15,000 cheaper than the Tesla Model Y. 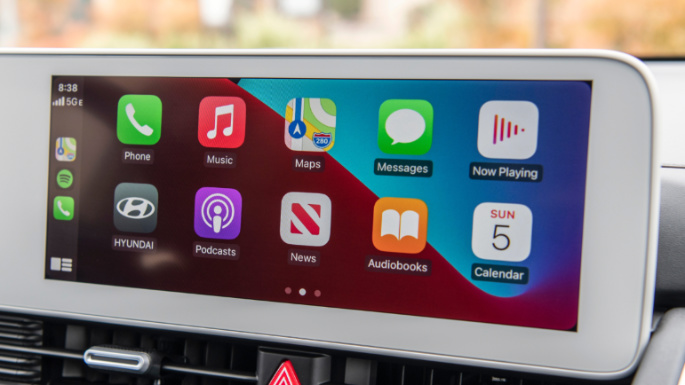 According to Hyundai, the Ioniq subbrand emphasizes connected living. The Ioniq 5 offers a long list of innovative infotainment and connectivity features, including a 12.0-inch touchscreen and a 12.0-inch digital gauge cluster. The Hyundai Bluelink app also allows the driver to control several vehicle functions, even before driving.

Standard technology features include a 12.3-inch touchscreen, a six-speaker stereo, satellite radio, HD Radio, navigation, Bluetooth, Android Auto, Apple CarPlay, and USB ports. The Tesla Model Y offers more intuitive tech features, although that is to be expected from the futuristic automaker. By comparison, the Ford Mustang Mach E has a larger touch screen than the Ioniq 5 and wireless Android Auto and Apple CarPlay, setting the Ioniq 5 a little behind its rivals in the tech department.

The Ioniq 5’s infotainment system works well and is easy to use with a highly responsive touch screen and sharp graphics. You can also rearrange the icons to prioritize and display the most frequently used functions. Some Ioniq 5 reviews comment on wanting a few more hard buttons and physical controls for the most commonly used functions.

The head-up display features augmented reality and can project navigation direction on the windshield. 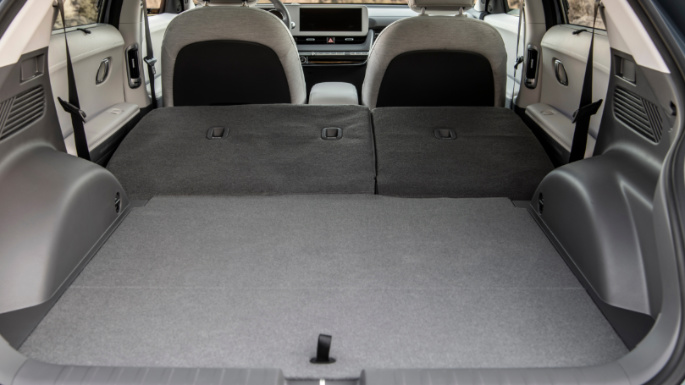 The 2022 Ioniq 5 falls behind its rivals with its limited storage space. The rear hatch only offers 27.2 cubic feet of cargo space behind the second row of seats, which is less than the Mach-E or Tesla Model Y, both of which provide more usable front trunks (frunks) too. Fortunately, the rear seats fold flat to accommodate more cargo space.

The interior cabin is loaded with unique storage compartments, including cubbies and dedicated spaces to store bottles, purses, and wallets. The center console (called a Universal Island) offers ample storage space and is moveable. Sliding forward and back with 5.5 inches of travel allows both front occupants to leave from the same door if necessary and for rear passengers to reach USB ports.

While the cargo space may be limited, the passenger space is plentiful, and few class rivals can match the Ioniq 5’s impressive headroom and legroom - even in the rear seats. The backs of the front seats are 30% thinner than regular car seats, which adds more space for the rear seat passengers. The completely flat floor also helps add more passenger space.

The Ioniq 5 is built on a higher-voltage platform which places it among an elite group of EVs, including the Porsche Taycan. Its 800-volt super-quick charging enables rates rivaling Tesla’s latest models, with a 10% to 80% charge in as little as 18 minutes when connected to a 350-kW DC fast-charging station. Unfortunately, these chargers are rare to come by. 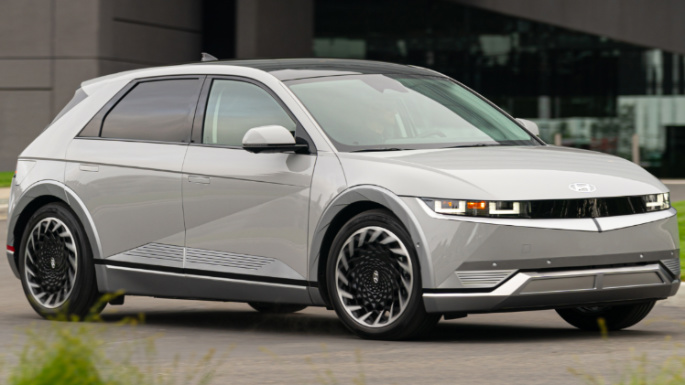 The Ioniq 5’s wheelbase of 118 inches is longer than Hyundai’s 3-row Palisade and helps maximize the interior passenger space. It seems even larger than it really is, thanks to a glass roof.

In photos, the proportions of the Ioniq 5 make it look smaller than it is in real life; we were continually surprised during our week of testing about how big (in a good way) the hatchback really is.

The interior may lack the futuristic charm of the exterior, but that is because it is uniquely laden with sustainable materials, such as plant-based fabrics and recycled plastic bottles, which gives the cabin an elegant appeal.

All the seats are highly comfortable and supportive. The front seats can recline and have footrests, allowing occupants to relax while the EV charges. The front seats are perched relatively higher than expected with the vehicle profile and push taller drivers near the headliner. This can, however, be remedied with downward seat travel since the seats are height-adjustable.

One downside is the visibility when looking out the rear window. The view upfront through the windshield is vast, but the thick rear roof pillars create large blind spots. The best remedy for this challenge is the available surround-view camera system. 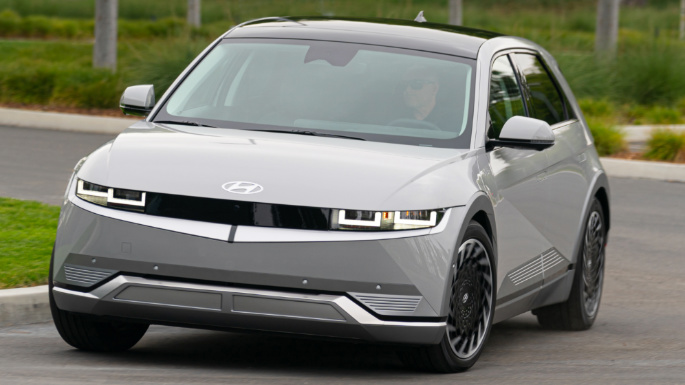 We had a blast during our week of testing the Ioniq 5. It makes a great daily driver; around town, it rides smoothly and easily, cushioning just about any road surface. The amount of one-pedal regenerative braking is adjustable, enabling the driver to dial in the amount they prefer. The switch to the regular friction brakes is so smooth that you won’t notice the transition.

The Ioniq 5 offers excellent traction and highly responsive acceleration with the dual electric motor setup. Zero to 60 mph acceleration happens in 4.7 seconds. These stats slightly edge out on the Tesla Model Y (4.8 seconds) and helps the Ioniq 5 overtake the Ford Mustang Mach-E, which was considerably slower, despite offering more athleticism.

On both urban and mountain roads, the compact crossover is smooth-riding and quiet; however, push hard into corners, and there is noticeable body lean. Several reviews mention the lack of steering feedback since the steering wheel doesn’t offer much information on what the front tires are doing.

All variants have a top speed of 115 mph. 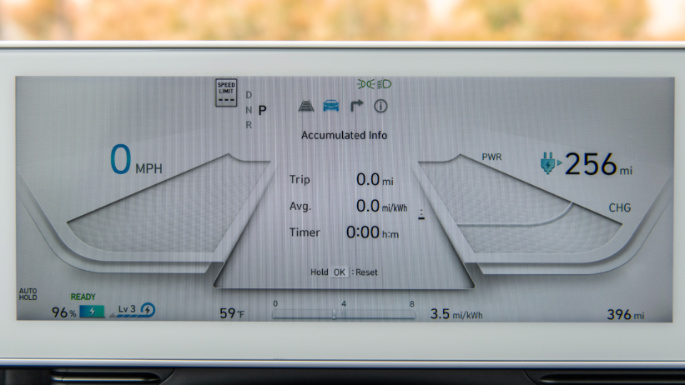 All-wheel-drive models include a heat pump, which helps boost their cold-weather driving range, especially when driving long distances. The Eco mode disconnects the front electric motor in most driving conditions to help improve and increase the electric car’s efficiency. 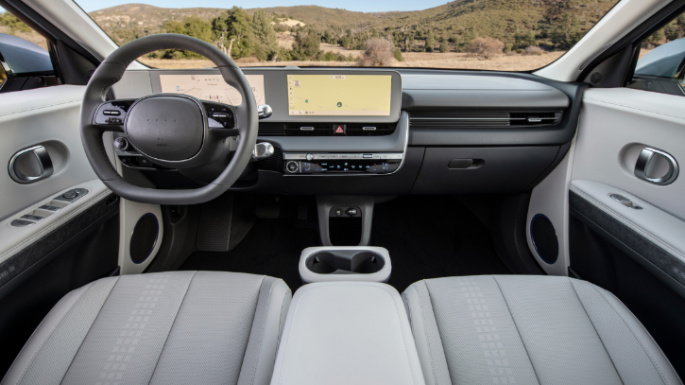 Neither the National Highway Traffic Safety Administration nor the Insurance Institute for Highway Safety has crash-tested the 2022 Ioniq 5. However, it has received a five-star rating in the Euro NCAP crash-testing.

The Ioniq 5’s platform is newly designed and engineered, which several reviews note could be a good thing for safety. The automaker has pointed to the parent company’s access to high-strength steel in designing the Ioniq 5’s body to be light yet highly strong and durable.

While the Ioniq 5 has a competitively long list of standard safety features, it has a few available features too, including a head-up display, surround-view camera system, front parking sensors, and perpendicular park assist. 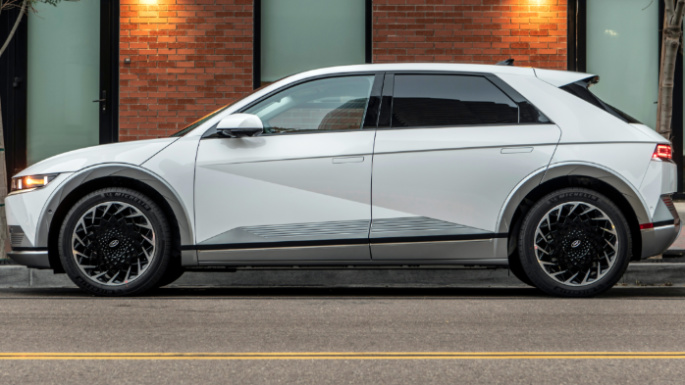 The all-new Ioniq 5 comes in three trim levels: SE, SEL, and Limited. All models have a single-speed transmission and come standard with rear-wheel drive. All-wheel drive is optional. RWD models can get up to 300 miles of range, while AWD models feature a dual electric motor setup with a combined output of 320-horsepower and up to 269 miles of range.

The Hyundai Ioniq 5 SE has a starting MSRP of $43,650, excluding a $1,225 destination fee. The RWD-only version of the SE trim is known as the SE Standard Range and retails from $37,900. This model has the same features as the SE; however, its driving range is 80 miles shorter.

For $3,500, you can upgrade to the dual-motor powertrain for all-wheel drive.

The Hyundai Ioniq 5 SEL has a starting MSRP of $45,900, excluding a $1,225 destination fee. In addition to the features and specs of the base SE model, the SEL adds synthetic leather upholstery, a hands-free power liftgate, a heated steering wheel, wireless device charging, and front parking sensors.

For $3,500, you can upgrade to the dual-motor powertrain for all-wheel-drive.

The Hyundai Ioniq 5 Limited trim has a starting MSRP of $50,600. This model adds on the center console that slides back and forth, a power-adjustable passenger seat, ventilated front seats, a heads-up display, a surround-view parking camera system, perpendicular park assist, a glass panoramic sunroof, and an eight-speaker Bose stereo.

For $3,900, you can upgrade to the dual-motor powertrain for all-wheel-drive.

Our tester was a fully-loaded Ioniq 5 Limited AWD, with a sticker price of $55,920. That felt a bit expensive to us, but with state and federal tax incentives and rebates, that price could fall quickly to a much more manageable number.

Our preferred spec would be the Hyundai Ioniq 5 SEL if we were car shopping. It adds a lot more safety and technology features for not that much more money over the SE base trim. The dual-motor setup is definitely the preferred choice for $3,500 more. This upgrade may be more expensive and reduces the miles of range, but the rocket-like acceleration is worth it.