Powertrain: A 147-horsepower, 2.0-liter four-cylinder engine with a six-speed automatic transmission and front-wheel-drive is the standard configuration.

A 175-horsepower, 1.6-liter turbocharged four-cylinder with a seven-speed dual-clutch automated transmission is available. 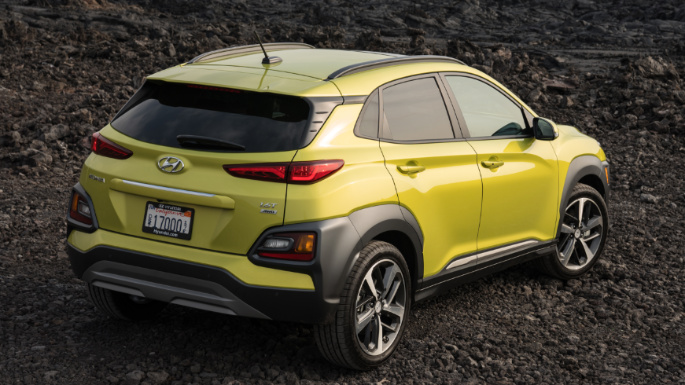 The 2020 Hyundai Kona is a subcompact crossover SUV and Hyundai’s entry into one of the most popular vehicle segments. It aims to blend rugged looks and available all-wheel-drive from larger crossovers while adding in maneuverability, efficiency, and a low starting price from a compact hatchback. In the Hyundai lineup, the Kona sits between the very inexpensive and small Venue and compact Tucson SUV.

For 2020, the Kona Ultimate model gets adaptive cruise control, while the former SEL with Tech Package becomes the SEL Plus trim level and gains a wireless charging pad and color driver information display.

The Kona is available in five trim levels for 2020. 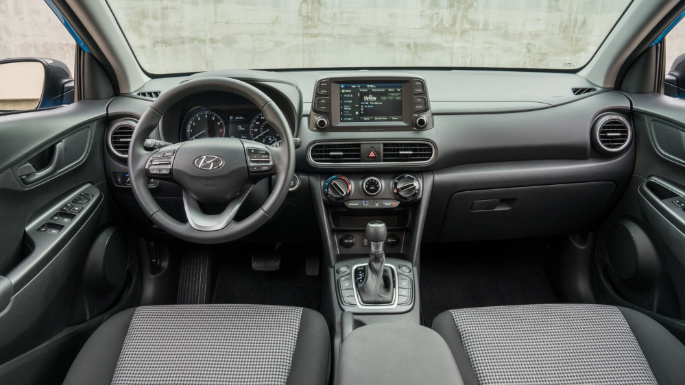 The National Highway Traffic Safety Administration (NHTSA) gave the 2020 Kona a five-star rating in overall crash test performance, its highest score. The Insurance Institute for Highway Safety (IIHS) awarded the Kona its 2020 Top Safety Pick, its second-highest rating. It scored well in all crash-test categories and earned points for its standard automatic emergency braking. However, its pedestrian detection system was not rated as highly as other systems.

Every 2020 Kona gets automatic emergency braking with forward-collision warning, as well as lane-departure warning and lane-keep assist, and a driver attention monitor that determines when the driver’s response times are getting slower and suggesting fatigue or impairment.

SEL and higher trim levels get blind-spot monitoring and rear cross-traffic alert, and the Ultimate versions get adaptive cruise control and pedestrian detection. As far as small crossovers go, however, the Kona’s driver assistance systems are among the most advanced, and it earns points for standard automatic emergency braking across the board. 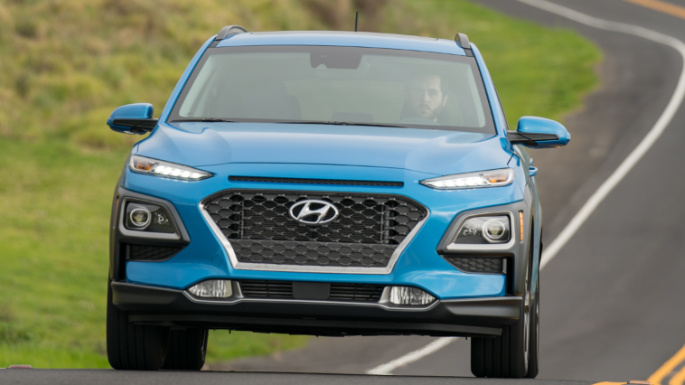 The Kona starts just over $21,000, making it one of the least expensive vehicles in this class. Standard features on the base SE trim include an automatic transmission, 16-inch alloy wheels, automatic headlamps, a height-adjustable driver’s seat, and Apple CarPlay and Android Auto compatibility, among other features. SEL models are nicer still with 17-inch wheels and privacy glass, but SEL Plus versions gets a sunroof, power driver’s seat, and upgraded audio system for about $25,000, a bargain compared to the relatively feature-poor Chevrolet Trax, for example.

Higher-trim Kona Limited and Ultimate models fall into a similar trap that these small SUVs land in, pushing against the $30,000 mark that nicely equipped and larger compact SUVs like Hyundai’s own Tucson land in. And the Ultimate is the only way to get driver assistance features such as automatic high beams, rear parking sensors, pedestrian detection, and adaptive cruise control with stop-and-go function. These features are more widely available on some rivals. But at least the Limited and Ultimate offer stronger engines than most rivals, at least giving a more tangible benefit than cosmetic upgrades like top levels of the Honda HR-V and Toyota C-HR. 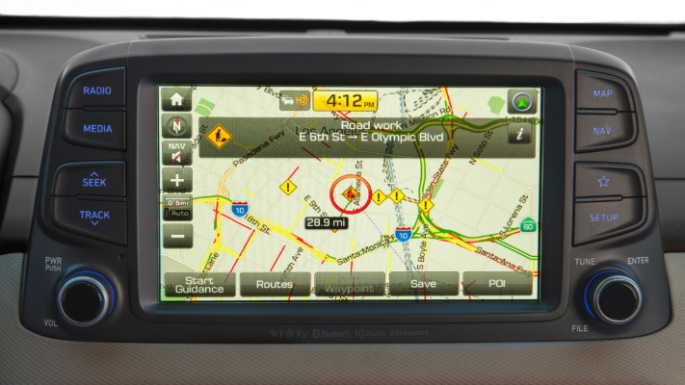 All Kona models get a touchscreen infotainment system and standard Apple CarPlay and Android Auto compatibility, two USB ports, and Siri and Google Now integration. All but the base SE get satellite radio and HD radio, while SEL Plus and higher have wireless smartphone charging. Only the top Ultimate trim gets built-in navigation with a larger, eight-inch touchscreen infotainment system. But all of the Kona models use Hyundai’s clear and responsive software that is a snap to use. Redundant hard controls on the center console also make it easier to perform common audio and climate functions without having to shuffle through menus on the screen.

Apart from the driver assistance features, most versions of the Kona come with features such as keyless entry, push-button start, satellite radio, and heated front seats. SEL Plus and higher get an eight-speaker Infinity audio system instead of the standard six-speaker setup, along with a power driver’s seat. Those models also add Hyundai’s Blue Link telematics system, which includes emergency assistance and vehicle diagnostics systems, as well as the ability to perform some functions through a smart device app such as operating the lights, door locks, and horn. 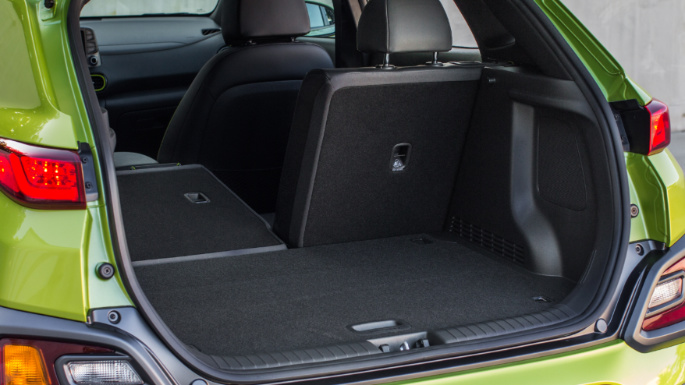 The Kona picks up the rear of the class in terms of cargo space. It offers less room with the rear seats up or down than nearly all of its rivals, save for the Mazda CX-3 and Toyota C-HR. It falls well behind the spacious Honda HR-V and Subaru Crosstrek, which rival some compact SUVs for space, as well as the mechanically related Kia Seltos, which has the most space in the small SUV class. A false floor on all but the SE model does provide some additional covered storage, however.

Space for rear-seat passengers is also tighter than in most rivals, and there isn’t as much headroom or legroom as in the HR-V or Buick Encore or Nissan Rogue Sport. That’s also worth considering if child seats are going to be regularly installed back there.

The front-seat area of the Kona is also somewhat snug, as the headroom isn’t as spacious as rivals would suggest. It also means there isn’t much room for storage. Apart from decently-sized cupholders in the center console, the Kona doesn’t have a lot of room to spare for small items. A wireless smartphone charging pad on most models, however, means there is at least a place to put a phone.

Hyundai rates the Kona to tow no more than 1,100 pounds. That’s typical of this class, but behind the Crosstrek’s 1,500-pound rating and the 2,000-pound maximum rating for the Renegade. It also has barely more ground clearance than a compact hatchback, which means the Subaru and Jeep are better bets if there will be much driving off the pavement. 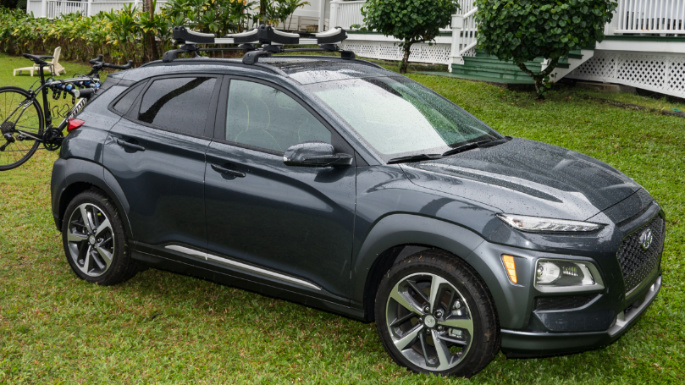 The Kona’s exterior styling breaks with Hyundai’s other SUV models, giving it a more distinctive look in a move that’s different from other automakers that make their smaller models look like shrunken versions of their larger ones. It also takes on a slightly sportier appearance, although that’s largely dependent on trim level. All versions get alloy wheels, but Limited and Ultimate models get 18s instead of 17-inch wheels, as well as chrome trim instead of silver. SEL models can also get a two-tone exterior color scheme with a contrast-color roof, like a Mini Countryman or Toyota C-HR.

While the exterior looks a little more expressive than others in this class, the interior is more typical Hyundai fare. Some bright color accents are available, but the Kona has a relatively dour interior design with materials that don’t do much to hide their serviceable mission. Few cars in this class feel plush, even on high-end models. However, the CX-30 and Countryman have better materials and a generally more pleasing design that outdoes most in their economy class. 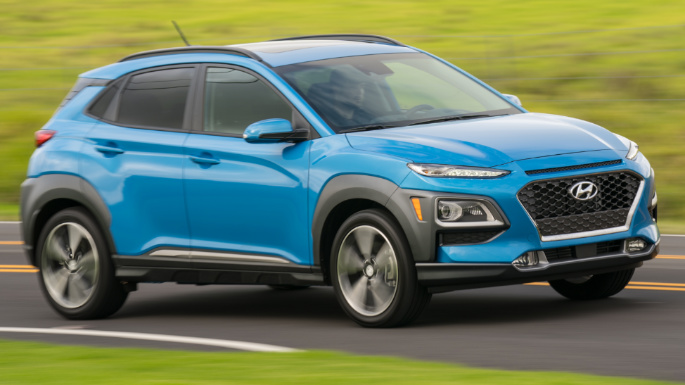 The base 147-horsepower, 2.0-liter four-cylinder engine has sufficient power for city driving but starts to strain on the highway. While the six-speed automatic transmission does what it can to tap into all available power, this configuration for the Kona doesn’t make for an exciting driving experience.

All-wheel-drive compounds these problems. It is, however, about on par with rivals such as the Subaru Crosstrek and slightly better than the Mini Cooper Countryman, Nissan Rogue Sport, and Toyota C-HR in this regard.

The 175-horsepower turbo-four on Limited and Ultimate models is much stronger, quick in fact, and makes the Kona feel more like a performance hatchback than an economy SUV. The seven-speed dual-clutch automated transmission on those models shifts quickly once up to speed but suffers some jerky responses from a stop or at parking lot speeds. But it’s also among the most powerful in the class and is quicker than the slightly more powerful Mazda CX-30.

Ride and handling are strong points for the Kona. Its small exterior dimensions make it easy to maneuver, but the supple ride doesn’t make the vehicle too soft in the corners at higher speeds. All-wheel-drive models use a more sophisticated rear suspension setup, but all models handle better than a number of rivals. The suspension also does an admirable job of keeping road and tire noise to a minimum, and engine noise is reasonably subdued compared to other vehicles in this class. 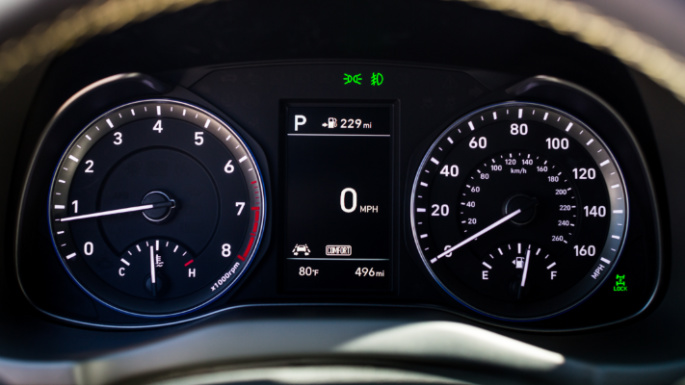 The 2.0-liter Kona models are rated among the highest in the class and competitive with the likes of the Honda HR-V. Opting for the more powerful turbocharged engine also doesn’t affect efficiency too adversely. But it’s worth noting there are numerous larger, more powerful compact SUVs that get similar, if not better, fuel economy. 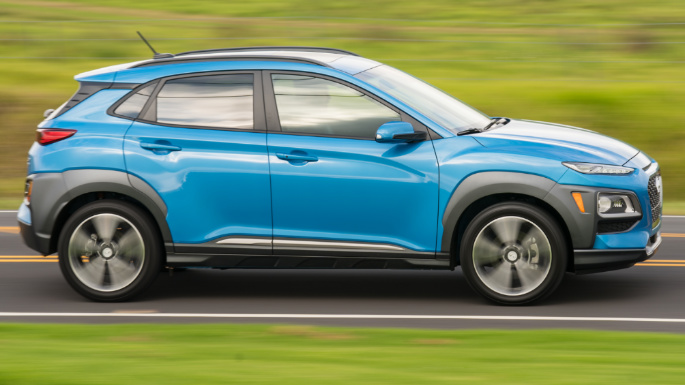 Hyundai doesn’t offer much in the way of factory-installed options, unlike some automakers. Features that can be installed by dealers include floor mats, an auto-dimming rearview mirror, crossbars for the roof rails, mudguards, and a first aid kit.