Vehicle Type: The Jeep Wrangler 4xe is a plug-in hybrid off-road SUV with seating for up to five people.

Powertrain: The 2021 Jeep Wrangler 4xe is powered by a 2.0-liter inline-four-cylinder engine paired with an electric motor to produce a net system output of 375 horsepower and a strong 470 lb-ft of torque.

It is paired with an eight-speed automatic transmission and four-wheel drive.

The PHEV powertrain is capable of an all-electric mode range of 21 miles and can pair with the gas engine to produce a total driving range of 370 miles. 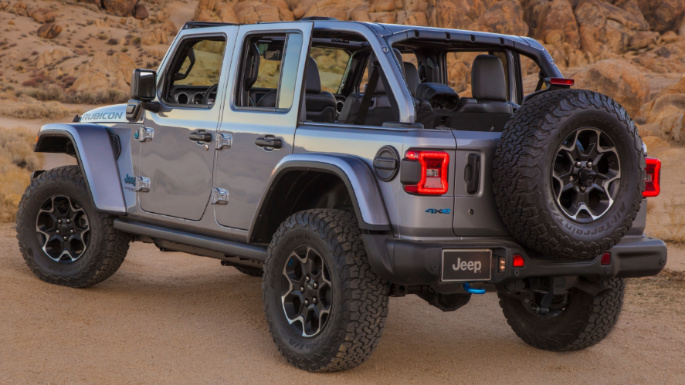 It was only a matter of time before Jeep decided to upgrade its hardcore off-roader with an electrified powertrain. The Wrangler is a mainstay in the Jeep lineup and a mainstay on trails and mountain passes around the world, but it hasn’t been known for being particularly tech-forward. That all changes with the new-for-2021 Jeep Wrangler 4xe, which takes the familiar Wrangler body and packs it with a plug-in hybrid powertrain.

The 4xe uses a turbocharged inline-four paired with an electric motor to produce astonishing off-the-line torque and the ability to drive on all-electric power for up to 21 miles. The net effect of the torque and electric power isn’t stellar fuel economy but is instead the ability to access all of the torque from a standstill, which helps the Wrangler 4xe tackle tough terrain and make its way through daunting off-road obstacles.

The Wrangler 4xe is aimed at new car buyers wanting a hardcore off-roading experience with room for the family. It competes with the Toyota 4Runner, Land Rover Defender, and the upcoming Ford Bronco. Buyers wanting a more refined experience should opt for the Grand Cherokee, which brings many off-road abilities and an available Hemi engine without the tradeoffs required by the Wrangler. 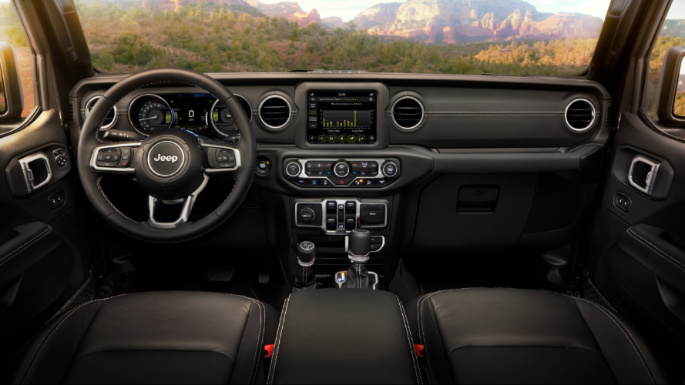 The 2021 Wrangler achieved mixed results in crash tests. The Insurance Institute for Highway Safety (IIHS) rated it marginal for driver-side front overlap crashworthiness and Good in all other crashworthiness categories. The Wrangler’s headlights were rated Marginal or Poor, depending on the model. Front crash prevention was rated Superior, but only with optional equipment on board.

The National Highway Traffic Safety Administration has not yet rated the Jeep Wrangler 4xe, but its gas-powered counterpart scored a four-star overall rating with three stars for rollover resistance. A lower rollover rating is common among off-road vehicles because their high center of gravity makes them easier to tip. 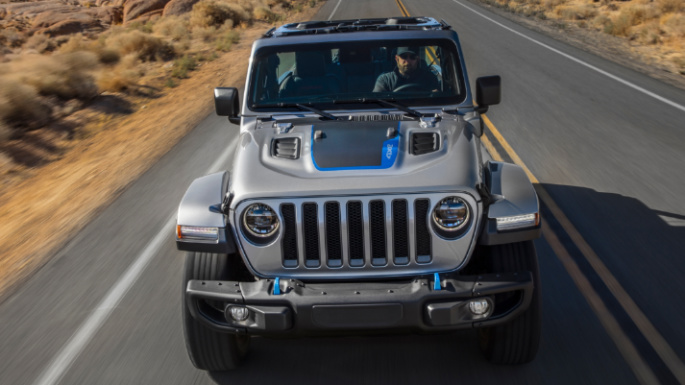 The Wrangler 4xe has a starting price that is almost $20,000 more than that of the standard Wrangler. Selecting a higher trim level and adding a few options can easily drive the price tag north of $60,000, which is a big ask for a Wrangler of any type. On the upside, the 4xe's electric range, along with the growing availability of charging stations, may soften the blow for many buyers.

No matter the trim or configuration, the Wrangler requires added-cost options to get all of the available safety equipment. Almost nothing is standard, but the top trim does at least get blind-spot monitoring, a rear parking sensor, and rear cross-traffic alerts.

The Wrangler 4xe is a unique vehicle so it is difficult to compare it to the market using comparable models from other automakers. The Land Rover Defender is significantly more expensive and the Ford Bronco has been delayed by several months, so the Wrangler has most of the market to itself. Only the Toyota 4Runner is close in price, but it's larger, more family SUV-like setup doesn’t lend itself to hardcore rock crawling and trail bashing like the Wrangler.

Tax credits will help reduce the overall financial pain of buying a new Wrangler 4xe. The federal government offers a credit of $7,500 and many states offer their own tax credits that can apply at the same time. Electric vehicles and plug-in hybrid vehicles are eligible for credits 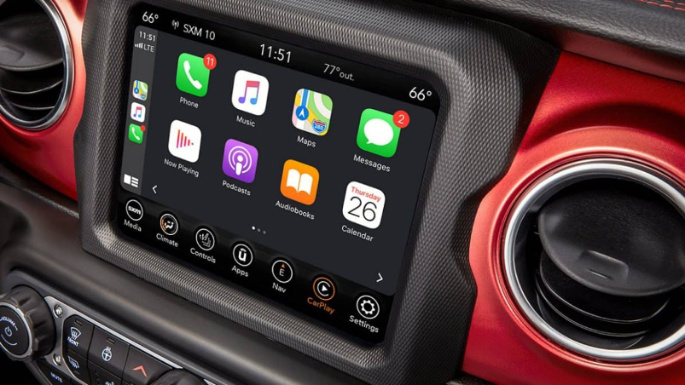 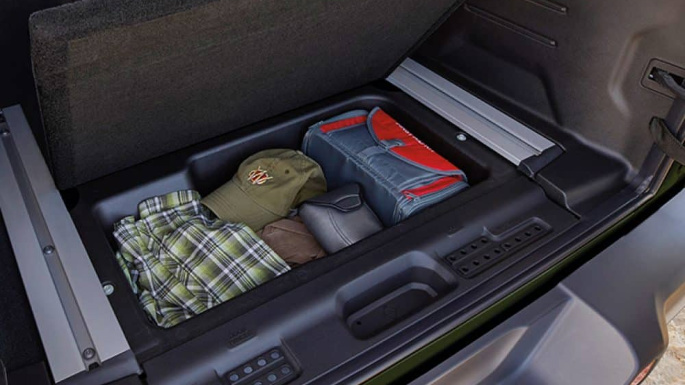 While the standard vehicle can be had with two doors, the 4xe is available only in four-door Jeep Wrangler Unlimited trim. This opens the back seat for easier access and allows more legroom for passengers in the back. The larger four-door Wrangler is more spacious, but the vehicle’s ride height and small doors make it difficult for parents to load children into the back.

The Wrangler’s interior is boxy and upright, but Jeep did take care to provide decent storage for small items. The door pockets are elastic mesh, which means there are no cupholders or large-item storage in the doors.

Higher trim levels get upgraded audio equipment that includes an Alpine Premium Audio system. Since the Wrangler’s doors are removable, there are speakers located on the vehicle’s roof crossbars and in other locations to keep the party going when the Wrangler is being driven in the open air. 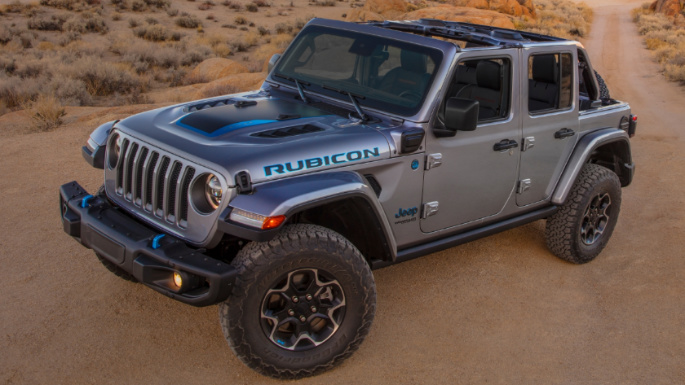 The Jeep Wrangler’s styling hasn’t changed much in decades. Today’s Wrangler looks like yesterday’s Wrangler and the vehicle before it. The addition of a four-door Unlimited model several years ago opened the Wrangler up to a wider audience and families, but the overall boxy shape didn’t change.

The 4xe is unmistakably a Wrangler, but Jeep has given the vehicle its own style that sets it apart in the Wrangler lineup. Electric blue accents come in the model name on the front quarter panels, the front and rear tow hooks are blue, and certain paint schemes feature a blue 4xe logo on the hood.

The Wrangler’s interior is utilitarian first, and many of the styling, design, and size choices are based on that philosophy. Removable doors mean that some electrical components had to be moved to the dash, such as the power window controls. The interior overall is just as upright and boxy as the exterior, though that boxiness brings improved headroom and decent outward visibility for the driver.

Depending on the top, accessing the 4xe’s rear cargo area can be quite difficult. Unbuckling the soft top is sometimes difficult, and the tailgate is heavy with a spare tire attached. Once open, there’s a decent amount of space for gear, but the process to open the rear should be simplified. 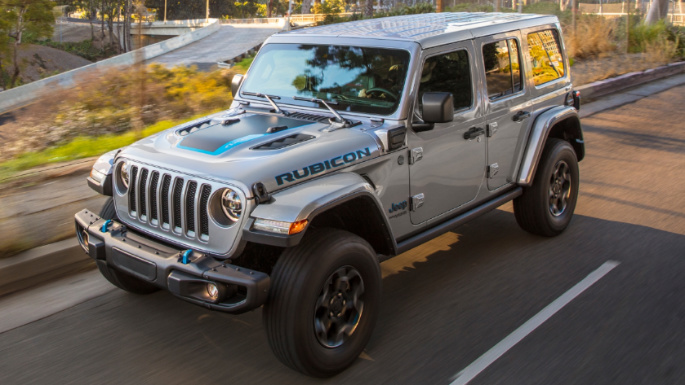 Perhaps thanks to the added weight from the battery pack under its back seat, the Wrangler 4xe is surprisingly well-behaved on the road. The ride on the highway is smooth overall, with little wandering or jitters over broken pavement. In town, the Wrangler manages potholes and can navigate tight areas quite easily. The plug-in hybrid system also allows for various driving modes, depending on the activity. The vehicle offers an e-save mode to preserve battery power and traditional hybrid mode. Using control on the dash, drivers can choose max regen mode, which increases braking regeneration and other features and opens up one-pedal driving, which means the vehicle can slow itself without the use of a brake pedal.

As should be expected from any soft top vehicle, the Wrangler is pretty loud inside, especially at freeway speeds. Plenty of wind noise and sounds from other vehicles, sirens, and even singing birds make their way into the cabin without much to stop them. Hardtop models fare much better in this regard but don’t have the same adventurous appeal as the soft top.

Despite its healthy power and 470 pound-feet of torque, the 4xe isn’t a quick vehicle. There’s no struggle to reach speed or climb a hill, but there is a noticeable lack of urgency when the gas pedal is pressed hard. Even when running only on electric power, the 4xe is still quite noisy, though the sounds it makes are much more futuristic in nature.

The handoff between electric and gas powertrain components is relatively seamless, but there are a few stutters at times when moving slowly through parking lots or in neighborhoods. On the trails, the 4xe's low-range and trail-rated capability allow it to ford up to 30 inches of water. 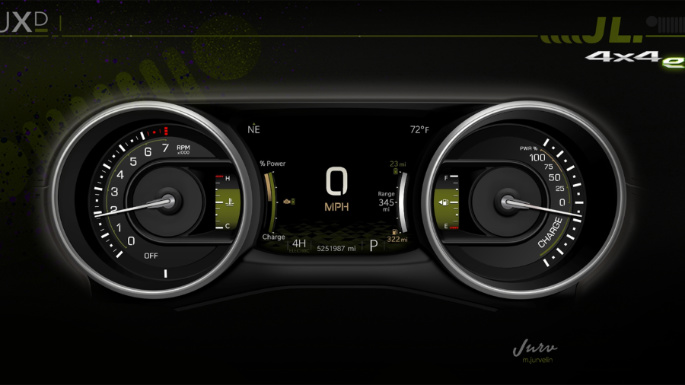 The Jeep Wrangler 4xe has EPA-estimated fuel economy figures of 49 MPGe combined with gas and electric systems in use and 20 mpg combined on gas alone.

It’s worth noting that people buying Wranglers are doing so because of its off-road abilities and because of its image and open-air experience. Part of that image is the Wrangler’s boxy shape, which hasn’t been kind to its aerodynamics and fuel economy.

In our week of testing on more highway driving than city driving, we averaged 21.7 MPG. 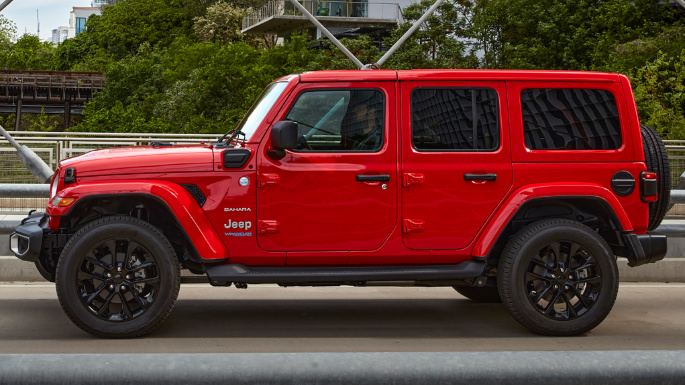 If we were shopping for a Jeep Wrangler 4xe today, we would opt for the mid-range Rubicon trim. It’s the most hardcore 4xe model available today and offers large off-road tires, a heavier-duty four-wheel-drive system, and the hardcore styling elements that make the Wrangler special. If the plug-in hybrid drivetrain isn’t a huge driver to buy the 4xe, the standard Wrangler offers the same capability with a tried-and-true gas powertrain for much less money. The new Wrangler Rubicon 392, which uses an enormous V8, takes the exact opposite approach but offers supreme off-road fun in the process.