Powertrain: A 291-horsepower, 3.8-liter V6 with an eight-speed automatic transmission and front-wheel-drive. 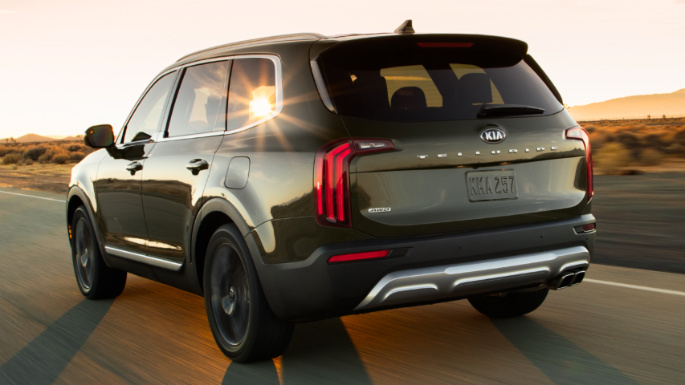 The Telluride was a new model for 2020 and supplants the Sorento as the brand’s largest SUV, and therefore, its biggest family hauler.

It seats up to seven or eight passengers spread across three rows of seats.

In addition to the Telluride’s space, it promises a towing capacity of up to 5,000 pounds when properly equipped.

Known for its generous equipment levels and warranty coverage, Kia has packed the Telluride with features for a competitive – if not inexpensive – price.

Changes for the 2021 model year include the addition of a new Nightfall Edition on some EX and SX models. It comes with unique gloss black exterior trim pieces and 20-inch rims, a Wolf Grey exterior color only available for this edition, LED headlights, and a gloss black grille with a new design.

Other 2021 model changes include the addition of Black Copper as an exterior color. 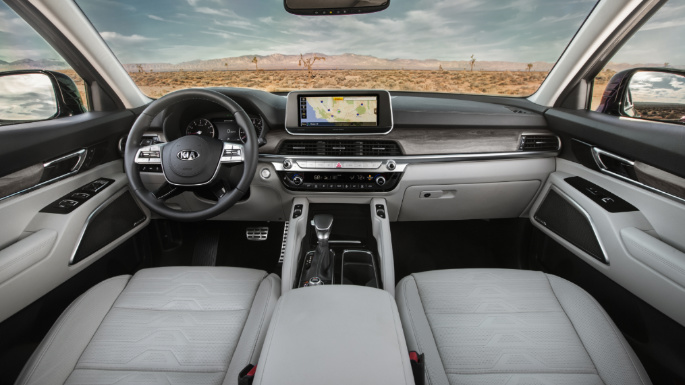 The National Highway Transportation Safety Administration (NHTSA) awarded the 2020 Telluride its maximum five-star rating in overall crash tests, while the Insurance Institute for Highway Safety (IIHS) awarded the Telluride with its Top Safety Pick (its second-highest rating), topping the charts in areas such as collision avoidance.

Features such as automatic high beam assist, highway traffic assist that can adjust speed based on speed limits, and a surround-view camera is optional on some models.

Rivals in this class are increasingly upping the game on standard driver assistance technology, and the Telluride is among the best equipped, for now. Still, those looking at premium SUV brands will likely be envious of what the Telluride includes for the base price. 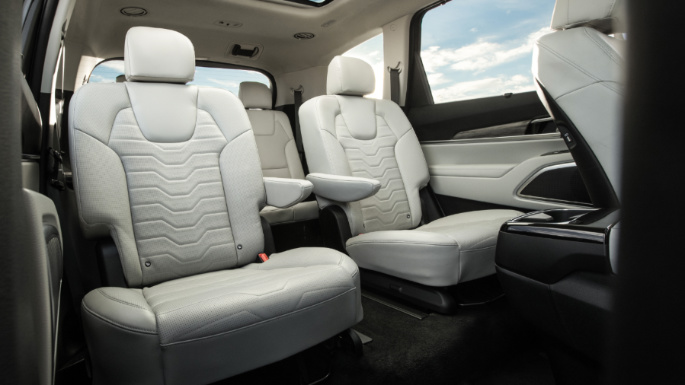 The base Telluride LX starts from just over $33,000. The days of Kias being sold primarily on price are long gone, so direct rivals such as the Honda Pilot and Volkswagen Atlas are the same price, and the Subaru Ascent is slightly less expensive because it includes all-wheel-drive in the base price.

All in, a top-level Telluride SX all-wheel-drive just about hits $47,000, which is far less expensive than top-trim versions of the Ascent, Atlas, and Pilot – let alone very expensive versions of vehicles such as the Chevrolet Traverse and Ford Explorer. That also includes the Prestige Package, which adds upgraded leather upholstery and interior materials, heated and cooled second-row seats, and a head-up display, among other features on top of the already comprehensively equipped SX trim. It’s perhaps at the high-end level that the Telluride represents the best value. 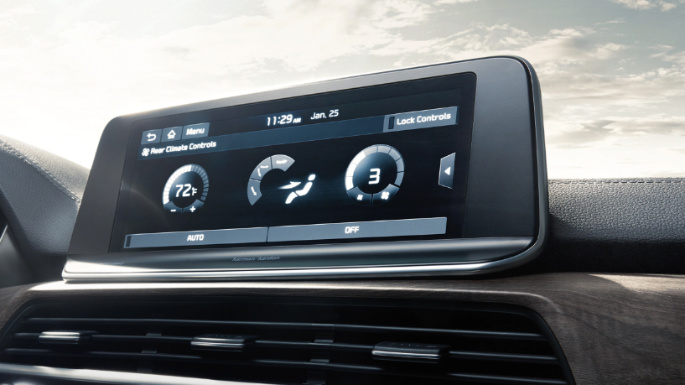 All Telluride models get standard Apple CarPlay and Android Auto compatibility, and five or six USB ports spread around the rows of seats. The LX and S use an 8-inch touchscreen infotainment system, while all other models use a 10.25-inch version with built-in navigation. Kia’s UVO telematics system is also included with a subscription. It’s also an easy-to-use system with a good array of physical controls, unlike many rivals. EX and SX models also include built-in navigation, with directions displayed on an optional head-up display.

EX and higher models include niceties such as ventilated seats, power tailgate, and power-folding mirrors. Kia Telluride SX models can be equipped with a head-up display and a digital instrument cluster display in between the dials. None of these are revolutionary features, but they contribute to the polished feel of the upper trims of the Telluride.

Those looking for a well-reasoned infotainment system and mix of physical controls for audio and climate functions should find a lot to like here, even if Dodge’s UConnect and Chevy’s MyLink might be able to do more with hotspots and telematics than Kia’s systems. 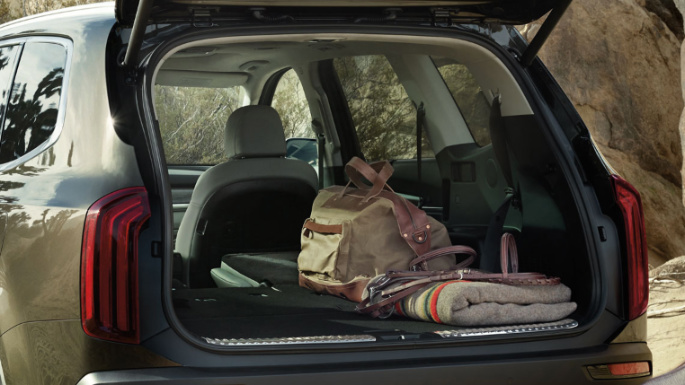 The Telluride’s vast exterior dimensions pay dividends inside, as it’s one of the roomiest models in its class. Some higher-end versions get second-row captain’s chairs that reduce total capacity to seven, but those in the first two rows will get plenty of legroom regardless of the seating configuration.

Large doors also make it a cinch to get in and out, even if the step-in is higher than a minivan (the sacrifices people are willing to make to get rugged looks and all-wheel-drive).

Unfortunately, the Telluride’s third-row seat isn’t as adult-friendly as one would hope with something this large. Kids should be fine, although even they might find three’s a crowd. The VW Atlas is also good for two adults, as is the Ford Explorer.

And space behind the Telluride’s third row isn’t anything cavernous, like it is on vehicles such as the Atlas and Traverse, although it is impressive with the second and third rows folded. Still, the Telluride is better-than-average among its immediate rivals, meaning there’s no need to go looking for a full-size, truck-based SUV like a Chevrolet Suburban or Ford Expedition.

Telluride models can tow up to 5,000 pounds when properly equipped. That’s on the higher end of towing capacities for vehicles in this class, most of which top out at around 3,500 pounds. Only the rear-wheel-drive Dodge Durango and Ford Explorer can tow more. 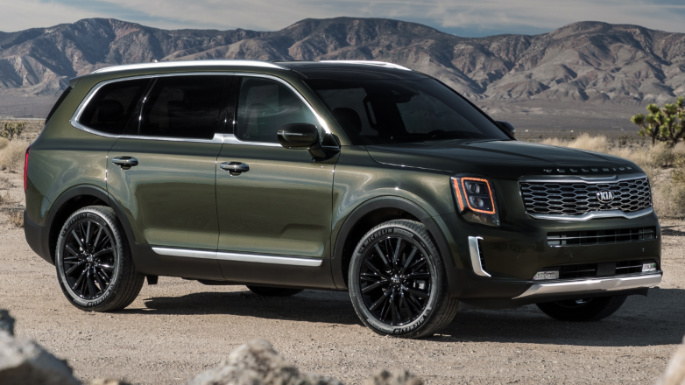 Kia has given the Telluride one of the nicest interiors in this class, and possibly one of the nicest interiors in any mainstream vehicle. Material quality is high, especially on the top SX trim, with nice details throughout. The stitching on the dash and throughout the interior would fool luxury brand loyalists. And storage throughout the cabin, including in the center console, is generous and well-thought-out.

Controls are also extremely easy to use. Kia’s infotainment system is one of the clearest to use in the business. The Telluride also benefits from big knobs and buttons, as well as details like a large gearshift selector that’s easy to grab with gloves on, unlike the button-only selector found in the mechanically related Hyundai Palisade, or rivals such as the Honda Pilot.

The Telluride’s exterior styling lends little to the current Kia lineup, which ultimately comes down to a matter of preference. But in an age where many of these three-row SUVs have extremely similar profiles, the Telluride stands out more than most. That may be appealing to some buyers. Its tall windows also allow for better visibility out for kids, and the top-level SX also includes second-row sunshades to stop too much light from getting in. However, there’s also a reason to look up in the SX, because it adds a dual sunroof system that includes a glass roof over that second row. 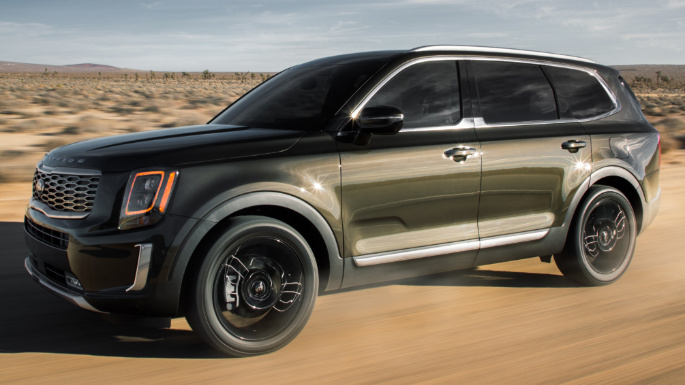 Ford’s 2.3-liter turbo four-cylinder in most versions of the Explorer is down on cylinders compared to the Telluride, but ultimately produces 20 more horsepower and feels more urgent. The Explorer also offers an upgraded turbocharged V6, and the Dodge Durango offers a V8 engine option for more performance.

On top of this, the Telluride also feels its size on the road, especially on twisty roads. While the ride quality is composed and the interior quiet and solid, it feels every bit of its length and width in tight spaces. A Mazda CX-9 is more fun to drive, while a Volkswagen Atlas is similarly proportioned, yet feels more athletic. And Kia’s own Sorento may be the way to go if you have to have some kind of third-row seat but travel in an urban place where parking a rig as large as a Telluride would be a significant burden. 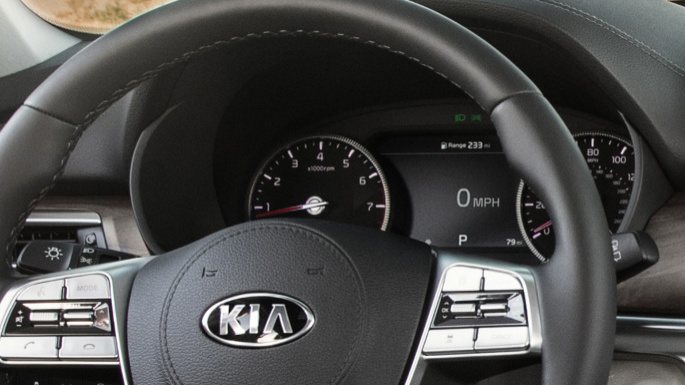 Those numbers are only so-so against comparable three-row SUVs, with two-wheel-drive versions of the Ford Explorer and Toyota Highlander posting 24 mpg combined, but also pushing 30 mpg on the highway. The Subaru Ascent gets up to 27 mpg highway with its standard all-wheel-drive, too. The Telluride also lacks a smaller, turbocharged four-cylinder to boost its fuel economy on some versions, like the Ascent, VW Atlas, and Mazda CX-9.

The Telluride also does not offer a hybrid variant to improve fuel economy, like the Toyota Highlander or Ford Explorer. 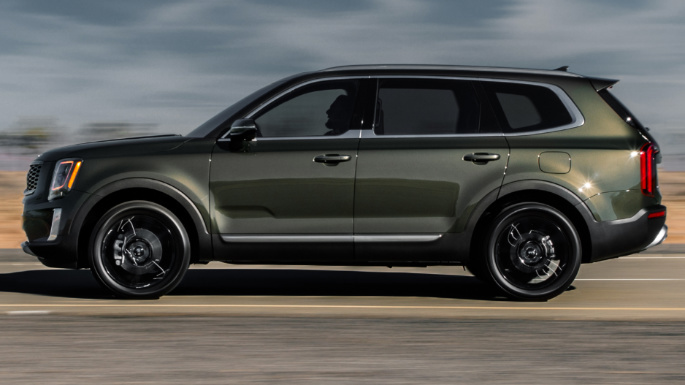 All-wheel-drive is optional and the only extra available for the LX.