Vehicle Type: The 2022 Lexus IS is a compact luxury sedan that can seat up to 5 passengers.

Stepping up to the IS 350 F Sport brings the MSRP to $43,050 without the destination fee or all-wheel drive option.

Both rear-wheel and all-wheel drive IS 350 F Sport models come with the same 311-horsepower 3.5-liter V6 engine, but the all-wheel-drive variant receives a six-speed automatic rather than the rear-wheel drive's eight-speed.

The IS 500 F Sport, new for 2022, comes with a brawny 472-horsepower naturally-aspirated engine, an increasing rarity in today’s automotive market. It is also paired with an eight-speed automatic transmission

With the Lexus IS lineup having been refreshed for 2021, there are not too many changes to which to speak. There are new comfort and premium packages for the IS 300 and a memory package for the IS 350 F Sport.

However, the IS 500 has been introduced for 2022, utilizing the RC F’s and LC500’s V8, an especially welcome sight for enthusiasts who are looking for a true luxury sport sedan

Would we buy one? Maybe. Having a screaming V8 under the hood and aggressive styling to match would be pretty cool, but many rivals offer a bit more when comparing the lower trims. 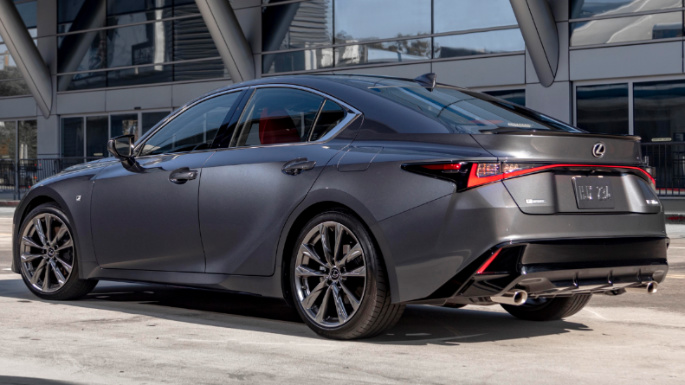 The Lexus IS is a compact luxury sedan that is currently in its third generation of production. It was refreshed for the 2021 models with updates to its exterior styling, infotainment system, and suspension. Besides the big news of the IS 500 joining the existing lineup, there are only minor changes introduced for the 2022 model year.

Cars like the Genesis G70, Infiniti Q50, Acura ILX, and Alfa Romeo compete with the Lexus IS most directly, but even though it is considered an entry-level luxury sedan, German cars like the BMW 3 Series, Audi A4, and Mercedes-Benz C-Class also play their own roles as competitors.

A range of powertrains is available across the IS lineup, including a base four-cylinder engine that produces 241-horsepower and 258 lb-ft of torque, the only turbocharged engine in the lineup. IS 350 models benefit from a more powerful 3.5-liter V6 engine, producing 311 horsepower, and the 5.0-liter V8 in the IS 500 F Sport produces 472 horsepower. IS 300 and IS 350 models are available with all-wheel drive while the IS 500 is rear-wheel drive only.

The range of performance helps enhance the aggressive exterior styling. Some may find it too angular and aggressive for what ultimately is a Toyota product, but the interior is more subdued and more akin to a luxury sedan. There are plenty of standard tech features and a slew of standard safety features, many of which are just options on competing models. Though the ride quality and seating are comfortable, it's more cramped than rivals, especially in the rear seats and fuel economy lags behind others. 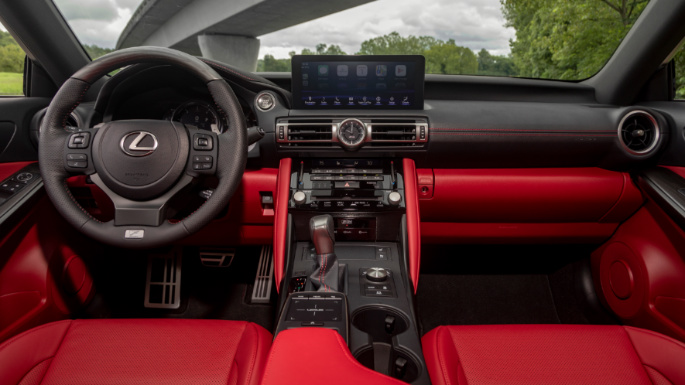 The NHTSA has awarded the Lexus IS five out of a possible five stars for its overall safety rating. Though the car only received four out of five stars in its frontal crash test rating, both side and rollover ratings were higher.

The IIHS has not evaluated the 2022 Lexus IS as of yet, but it has awarded the 2021 model a Top Safety Pick+, one of the best ratings they give. We expect this to be similar for 2022 since no significant changes have been made. 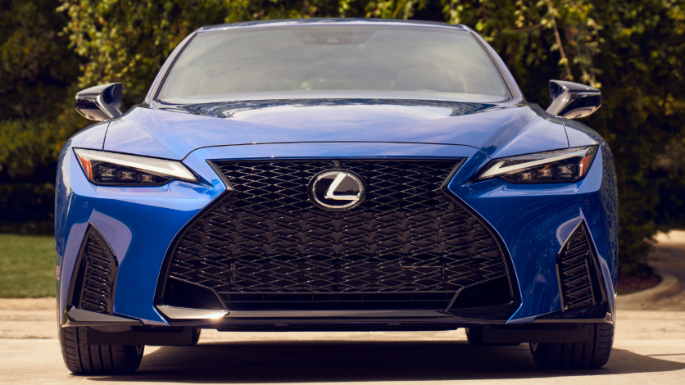 With its extensive standard safety features, its long list of standard technology features, and its middle-of-the-road MSRP, the Lexus IS starts off strong. Rivals like the Acura ILX and Cadillac CT4 significantly undercut the IS’ starting price, but they do not offer quite as much on the reliability, overall build quality, and resale value fronts.

Rivals like the BMW 3 Series, Mercedes-Benz C-Class, and Audi A4 offer a more luxurious experience, but they do not offer the standard safety features and strong resale value of the IS. Additionally, the IS 500 F Sport is relatively inexpensive compared to the performance versions of top-performers like the BMW M3 and Mercedes-Benz AMG C63, though the pricier options are still better.

The Genesis G70 is arguably the best value in the class with its surprisingly upscale feel, excellent warranty, and luxurious styling. It comes in around $1,000 less than the entry-level IS 300 RWD. Despite what the IS brings to the table, there are some factors that hold it back from being a truly outstanding value. 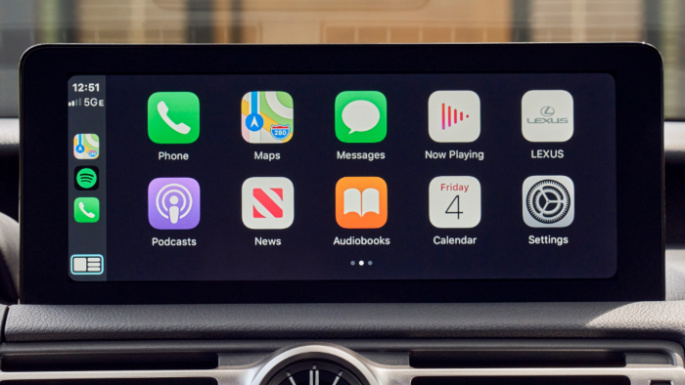 Even with the infotainment system upgrades in 2021, its usability really let the IS down, especially when compared to other systems in this segment. An 8-inch touchscreen comes standard with a larger 10.3-inch screen as an option. Our biggest complaint concerns the center console touchpad, which was slow and unintuitive, but poor screen graphics and complicated menus only add to our distaste.

Buyers can add a digital gauge cluster, a digital keycard, and a Mark Levinson 17-speaker audio system to the mix to take their luxury experience one step closer to that of comparable German automakers 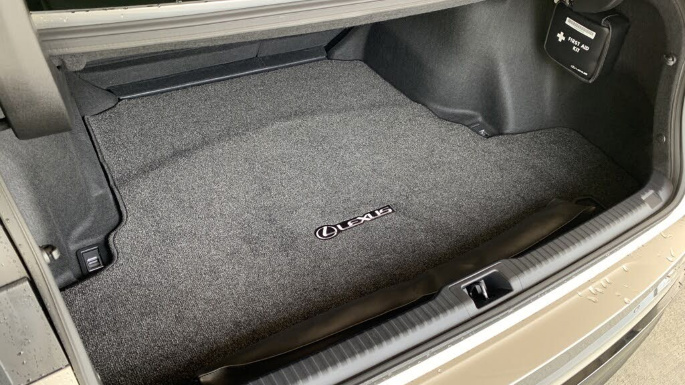 Compared to rivals, the Lexus IS falls a little short on the practicality front. Rear legroom is tight for all but children; the front seats, while comfortable, are merely adequate, especially for taller passengers. Trunk space is also adequate at just under 11 cubic feet without the 60/40 split rear seats folded down.

While its aggressive styling also lends to some limited rear-seat headroom and cumbersome entry, the LATCH child seat system is said to be incredibly easy to use, and the overall interior layout is ergonomically sound.

Although the IS 300 and IS 350 models do come with optional all-wheel drive, this is not likely to help with too much more than traction during spirited driving, though it may come in handy during mildly inclement weather. Rivals offer many of the same drivetrain options, only keeping the IS relatively competitive in this aspect. 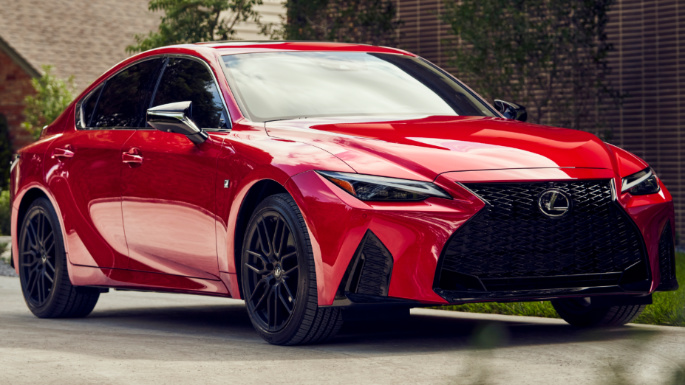 It's one of the sportier-looking vehicles in the segment, which is a good thing since many people have not traditionally associated Lexus with the word “sporty” in the past. Move to the interior, and you will find that it feels more like a luxury vehicle than its exterior suggests. While not quite on the level of BMW or Mercedes-Benz rivals, it is nicer than many competitors.

Controls are easily reachable and laid out in a sensible manner. The buttons and knobs are also nice to touch as they have a feeling of solidity in the hand. 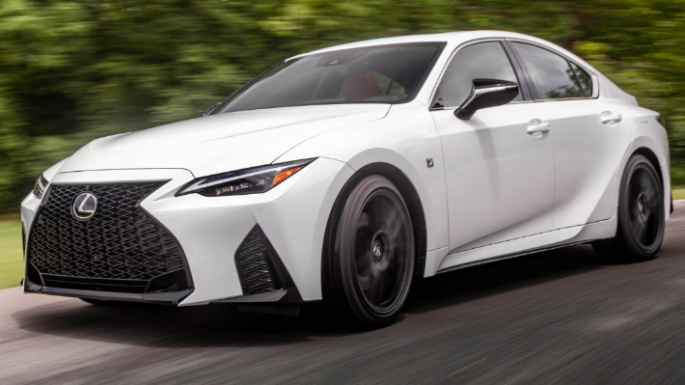 We've always enjoyed the handling of this generation of IS, though it's not perfect. The suspension can be a little soft for a performance sedan and the automatic transmission is particularly slow and unengaging across the entire IS lineup. F Sport models can also come equipped with adaptive suspension and a limited-slip differential to help the car handle even better. The steering is nicely communicative and well-balanced.

We also wish the Sport + mode was more aggressive; as it is now, the car needs a Sport ++ for situations where you really want to wring it out.

On paper, the the four-cylinder and V6 engine specs look competitive, but the Lexus IS is still relatively heavy so the power isn't as useful as one might hope. Overall performance is not as sharp and exciting as in some competitors.

During our time with the top-end IS500, we came to love the feel and sound of the V8 engine and its sub-4.5-second 0-60 time. Elsewhere in the IS lineup, both the four and six-cylinder engines offer expected and adequate acceleration and braking is solid. 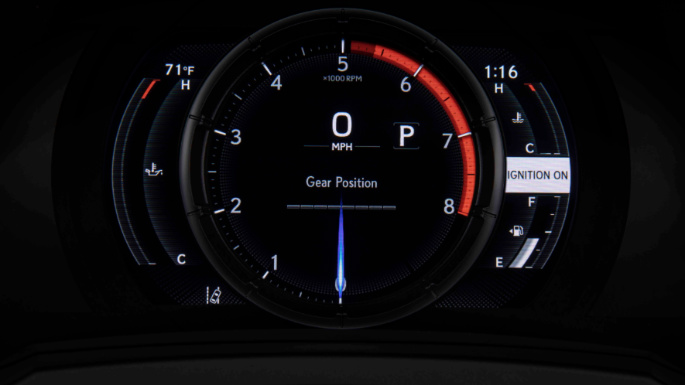 Fuel economy is not the Lexus IS’ strong suit, even with the base engine. Throwing out the all-wheel-drive models, the standard rear-wheel drive IS 300 returns EPA estimates of 21 and 31 MPG in city and highway driving respectively. IS 350 models drop to 20 and 28 MPG for a combined 23 MPG total, and the IS 500 is rated at 17 miles per gallon in the city and 25 miles per gallon on the highway.

Both the all-wheel-drive IS 300 and IS 350 return identical fuel economy numbers: 19 MPG in the city and 26 MPG on the highway for a combined 22 MPG average. 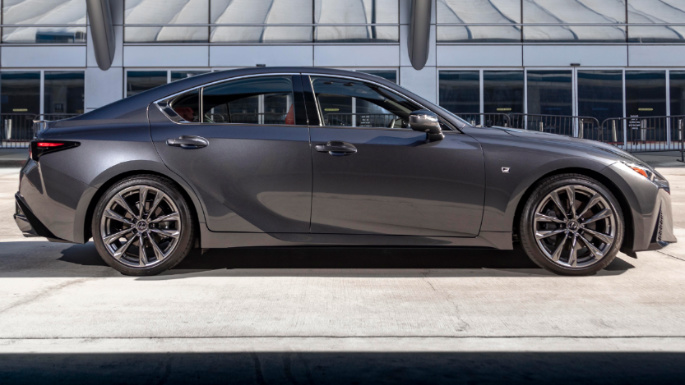 With a diverse lineup of powertrain and drivetrain options, Lexus has still managed to keep the IS lineup relatively simple. Rear-wheel drive comes standard on all models, regardless of engine choice, and all-wheel drive is a $2,000 option on both the IS 300 and the V6-powered IS 350 F Sport. IS 300 and IS 350 all-wheel-drive models come standard with a six-speed automatic transmission, and all rear-wheel-drive models benefit from an eight-speed automatic.

The Lexus IS 300 is the base model with a standard turbocharged four-cylinder engine and 241 horsepower. Its starting MSRP of $38,625 and a destination fee of $1,075 put its starting price at just over $40,000. It comes well equipped with standard equipment like an 8-inch touchscreen infotainment display and touchpad, Apple CarPlay, Android Auto, Amazon Alexa, a 10-speaker audio system, Bluetooth, HD radio, and two USB ports.

Moving to the Lexus IS 300 AWD costs $2,000 more than the standard IS 300 RWD without extras and gets buyers a larger 260-horsepower V6 engine, paddle shifters, and heated seats while retaining the other standard features offered in the base IS 300.

The Lexus IS 350 F Sport starts at $44,125 after the destination fee is added. Stepping up to the IS 350 F Sport AWD costs an additional $2,000. Both models feature a 311-horsepower naturally-aspirated V6 engine. Additional standard features on the IS 350 include 19-inch allow wheels, tuned suspension, a heated steering wheel, a rear spoiler, and a digital gauge cluster.

Buyers can add the F Sport Dynamic Handling package to IS 350 for a more aggressive driving experience. It includes adaptive suspension and a limited-slip differential, which is only available in rear-wheel-drive models.

The new 2022 IS 500 F Sport Performance features a 472-horsepower 5.0-liter V8 engine and a starting price of $57,575 after the destination fee is added. It comes standard with the IS 350’s optional Dynamic Handling package, sport brakes, stacked quad exhaust tips, and a moonroof.

Buyers can also choose the IS 500 F Sport Performance Premium model which includes the IS’ 10.3-inch touchscreen, a 360-degree surround-view camera, and the 17-speaker Mark Levinson sound system. It starts at $61,000 before the $1,075 destination fee. None of the Lexus IS 500 variants are available with all-wheel-drive.