Powertrain: There are four powertrains designated by different numbers in the model name:

The Lexus NX is all-new for the 2022 model year. Overall, the NX is slightly larger, exterior styling is revised, interior styling and creature comforts are upgraded, more powertrain options are available, and the infotainment system is improved.

Would we buy one? We would, yeah. 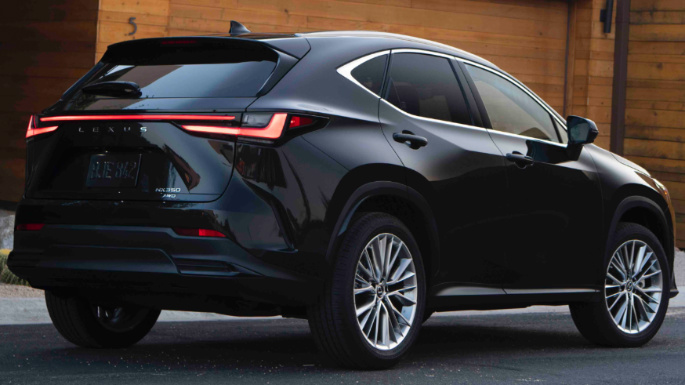 The new Lexus NX has been upgraded to compete in a class with the smallest luxury SUVs. The outgoing model lagged behind in a competitive group particularly when it came to technology and driving dynamics. The NX competes against crossovers like the Acura RDX, Volvo XC40, BMW X1 and X2, Mercedes GLA, and Audi Q3.

A new platform underpins the new NX, with both the wheelbase being stretched and width widened, helping with both interior space and overall ride quality. Though, even in more aggressive F-Sport trim, the NX would not be confused with a sports car.

The NX features four engine options, including a class-leading plug-in hybrid, and a peppy turbocharged engine. Although all-new, the exterior styling is consistent with the outgoing model, with the most obvious change being LED headlights on either side of the massive Lexus grille. Inside materials have been improved, and a touchscreen infotainment system replaces a trackpad-based system from the old model.

The base model comes standard with front-wheel drive, while the second-tier NX 350 and both hybrid models get standard AWD. The fastest model is the NX 450H+ which shares a powertrain with the Rav4 Prime, a vehicle that has been so popular it is nearly impossible to find on a dealer lot. 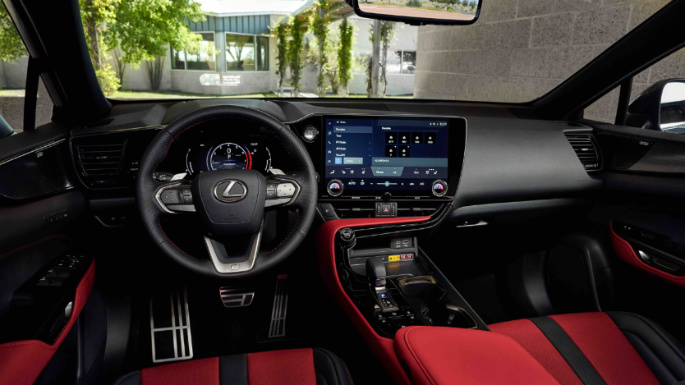 The Insurance Institute for Highway Safety (IIHS) has not yet rated the 2022 Lexus NX, though the outgoing model was awarded a Top Safety Pick+ designation.

The National Highway Traffic Safety Administration (NHTSA) has selected the NX for 2022 model year crash testing, but that data has not yet been released. 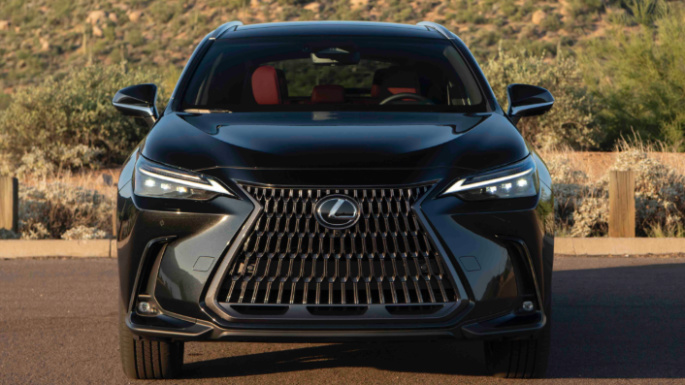 Starting at an MSRP of under $40,000 and equipped with a decent array of safety and tech features, the NX offers a reasonable value when compared to the rest of the class, though models from Audi, BMW, Mercedes, and Volvo start at a lower entry price.

Top-tier models also ring up at more than the competition, aside from spicier trims like the AMG options from Mercedes. Based solely on a dollar-to-dollar comparison of features and specs, the Lexus lags behind the competition despite being a completely refreshed model.

Even with a higher cost of entry, Lexus vehicles tend to hold their value better than European competitors. If you decide to sell your NX after a couple of years you stand to recoup more of your money. Lexus is a member of the Toyota family, meaning it's reasonable to assume reliability will be high, with fewer repairs also decreasing the overall cost of ownership. 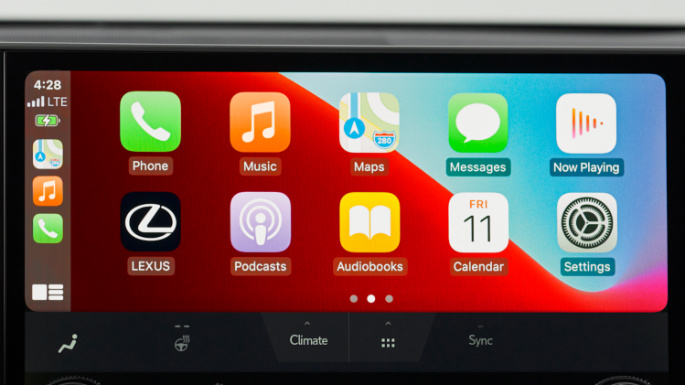 Base NX 250's get a 9.8 touchscreen infotainment display, including the wireless versions of both Android Auto and Apple CarPlay. A front-seat wireless charging pad is also available on all trims, meaning you can leave home without the cords, and your NX will keep you connected and charged up. A massive 14.0 is available as part of the Luxury Package and standard on NX 450h+ models.

Notably, the base stereo system has 10 speakers and offers very nice sound for all but the most discerning audiophiles. For the music snobs among us, a premium Mark Levinson surround-sound system packs in 17 speakers.

Lexus Digital Key allows you to share access to the NX with up to 7 people via a smartphone app, without a physical key. This feature may be great for households with multiple drivers.

Another neat optional feature is Advanced Park, which allows the Lexus NX to control virtually all aspects of parking, including steering braking, and gear changes. An upcoming feature will also allow the NX to park itself via a smartphone app.

The infotainment function is vastly improved over the outgoing model which was dependent on a trackpad. Overall the system brings the NX into the modern era, and compares favorably with the competition, but is not the most intuitive in the segment. A voice recognition system allows you to accomplish many features of the system in a hands-free fashion, though some reviewers found its performance finicky. An available head-up display also helps drivers keep their focus on the road. 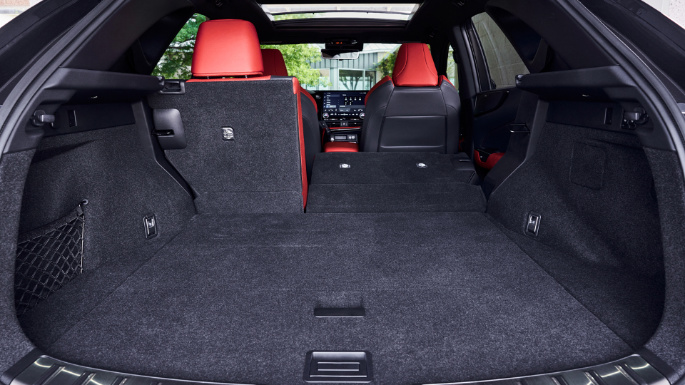 Passenger space overall has improved, particularly for rear-seat passengers. The seating space feels comfortable and slightly roomier than many other luxury crossovers. Four people can comfortably road trip, and five will still be comfortable for shorter jaunts.

Across all NX models towing capacity is a modest 2000 pounds, when equipped with a towing package. Ground clearance is a touch over seven inches, meaning even all-wheel-drive models are best suited to on-road adventures. 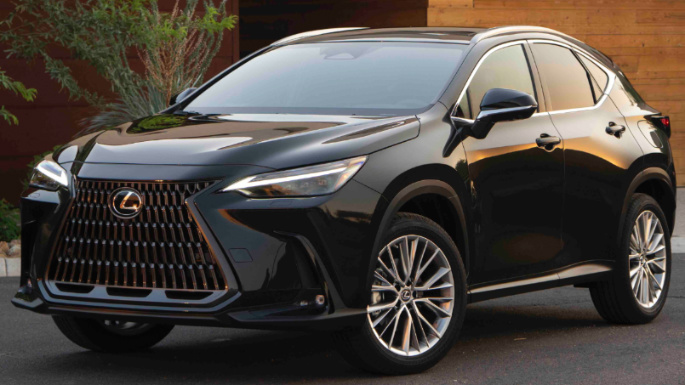 Exterior styling is very similar to the outgoing model, but those with a keen eye will be able to pick out the next-generation NX. Upgrades include LED head and taillights.

Interior styling is a little bland compared to some models in the segment. That said there are soft tough materials at nearly every touchpoint, and the NX does well to distance itself from its humble Toyota roots. There is even a little pad where the driver's knee might touch the transmission tunnel.

Gloss black stippled or prism trims that grace lower-tier models don't meet the standard of the segment. Open-pore wood is available on higher trim levels, but its black color blends in with other treatments. Selecting F-Sport trims ups the visual appeal for those needing something a little flashier including available, bright red leather with dark aluminum trim, with a pattern that mimics the look of carbon fiber.

Ergonomically both rows of seats are comfortable, and controls are where driver and passenger would expect.

The road feel from the steering wheel is less communicative than German brands in the segment, though the overall steering was improved by the redesign.

Even in F-Sport trim, with its adaptive suspension, the handling does not compare to that of the Audi or BMW. Though the NX is a crossover SUV and fulfills its primary function as a grocery-getter, it does have the composure to deliver occasional smiles from enthusiastic driving.

Slow for the segment all but the PHEV NX 450h+ model lacks the acceleration to pin you in your seat, but for everyday use, each trim has enough power to get to freeway speeds quickly or pass slow-moving vehicles on two-lane roads. 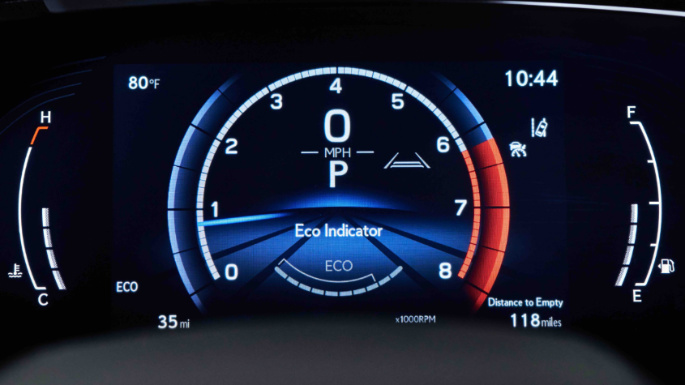 In base front-wheel-drive trim the NX 250 gets an estimated 33 MPG highway and 26 MPG in the city. Fuel economy drops by one MPG with optional AWD. NX 350 models get AWD as standard and drop fuel mileage to 29 highway and 22 city.

NX hybrid models improve on gas mileage, with the NX 350h receiving an estimated fuel economy of 37 highway and 41 city. The NX 450h+ gets 84 MPGe when factoring in the 37 miles of all-electric range.

Fuel economy is similar to that offered by the competition, but the plug-in hybrid NX 450h+ offers a class-leading all-electric range. Though PHEV the model will have very limited availability.

We tested a loaded NX 350h and came away impressed with its power. 239 horsepower (from an electric motor and a gas engine) may not sound like too much on paper, but it was more than enough in any situation you'll find yourself in: passing on the freeway, on-ramps, daily driving around town, and long road trips.

Plus, the hybrid powertrain lived up to its fuel-sipping reputation; over 332 miles of testing, we averaged just under 33 miles per gallon of fuel economy. That's particularly impressive when you consider just how lively the powertrain felt at the same time.

Meanwhile, the handling felt light and nimble and the interior was quiet and serene. The regenerative brakes -- which can sometimes feel mushy or dead -- raised no such concerns from us on this car.

Our only gripe would be that occasionally on rougher roads, the NX did betray its more humble roots (this is based on the Toyota RAV4, remember). It would sometimes feel less like a $50,000 luxury crossover and more like a basic $25,000 one. This isn't an issue you'll find on a Mercedes or BMW. 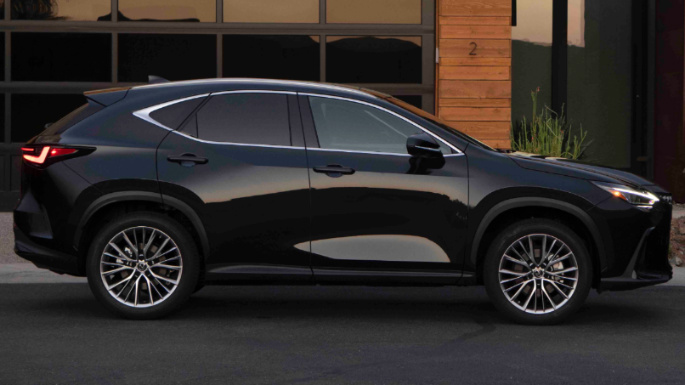 In base NX 250 trim, MSRP starts at $39,025. For your money, you get the previously mentioned Lexus Safety System+ 3.0 suite of safety features, 2.5-liter four-cylinder engine, and 9.8-inch infotainment system. Also included are dual-zone automatic climate control, push-button start, NuLux leatherette seating, heated front seats, and paddle shifters. Exterior features on the base trim incorporate 18-inch allow wheels, roof rails, and LED headlamps. Front-wheel-drive is standard and upgrading to an all-wheel-drive will add $1,600 to the price.

The next trim level by price is the NX 350h ringing up at $42,125 before any optional equipment. As implied by the name the NX350h is a hybrid, powered by a 2.5-liter four-cylinder in combination with two electric motors. This powertrain has a total output of 239 horsepower and includes AWD thanks to a rear-mounted motor. Upgrading to the hybrid also unlocks EV mode on the selectable drive modes which also include ECO, normal, and sport.

This is the model we tested and it's probably the one we'd choose, if not the non-hybrid NX 350.

NX 350, technically called the NX350 AWD, adds traditional all-wheel-drive as standard and costs $500 more than the hybrid version at $42,625. Aside from AWD, the engine is also upgraded to a 2.4-liter four-cylinder with 275 horsepower. Standard equipment is largely the same, but active noise control is added to help keep the interior quiet.

Picking the NX 450h+ raises the price to at least $56,635, but adds an onboard charger and larger battery pack and motors for a total of 304 horsepower. Aside from the additional power, the NX 450h+ can go up to 37 miles before needing to kick on the gas engine. Also included are perforated leather seats, heated and ventilated front seats, open-pore wood trim, memory seat function, and a heated steering wheel. Outside the PHEV gets a moonroof, 20-inch wheels, and a power rear hatch. The multimedia system is upgraded to a 14.0-inch screen.

NX 450h+ F Sport starts at $57,975 and shares the upgraded suspension, aggressive looks, interior trim pieces, sport seats, and upgraded suspension of the previous F Sport model, but includes the PHEV drivetrain for extra power. The 450 F Sport also gets a larger touchscreen, moonroof, and dark 20-inch wheels. Rather than a boost gauge, the NX 450h+ F Sport features an energy gauge, along with a g-force display.

A premium package adds many upgrades to the NX 250, NX 350, or NX 350h for $3,050 including ventilated front seats, power moonroof, and a power rear door. A luxury package for the same trims includes these features and 20-inch wheels, perforated leather seats, head-up display, wood trim, and ambient lighting.