The Mazda CX-30 is a new offering in the competitive small SUV segment. It bridges a narrow gap between the subcompact CX-3 and the compact CX-5 in Mazda’s burgeoning SUV lineup but aims to add some style and refinement in a relatively pragmatic class.

It’s available only with a four-cylinder engine and automatic transmission, but offers a choice of standard front-wheel-drive or optional all-wheel-drive, much like its rivals.

TL;DR: The CX-30 resembles newer Mazda designs, but is still distinctive among other crossovers. 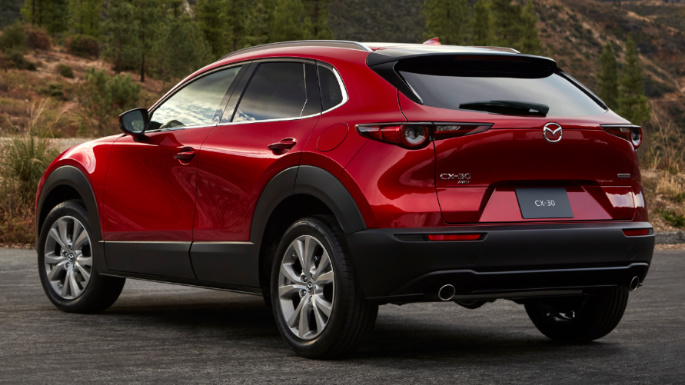 Adopting cues from the company’s recent models, the Mazda CX-30 emphasizes sporty exterior styling more than most vehicles in this class, and it ends up being the most stylish model you can get in the segment.

The curvaceous design mimics the larger CX-5 and CX-9 SUVs, as well as the recently redesigned Mazda 3 hatchback upon which the CX-30 is based.

Among its most distinctive features is a large grille that has a gloss finish on more expensive versions, as well as the 18-inch wheels that come standard on all but the base model. Some gray plastic lower cladding gives the illusion the CX-30 is an off-roader, but it still looks sleeker than the more upright Jeep Renegade and Subaru Crosstrek. At the same time, it isn’t as angular as the Mitsubishi Eclipse Cross, for example.

TL;DR: Refined design and emphasis on quality is unusual for the class. 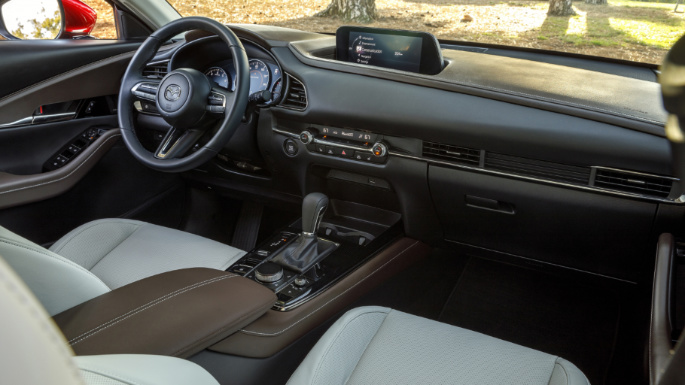 Much like the exterior, the CX-30’s interior oozes a level of refinement that is unusual for this type of car from a mainstream brand. It actually rivals some interiors from upscale brands like Audi, Mini, and Volvo, rather than Buick, Hyundai, and Nissan.

Even base models get a padded dashboard and door coverings, with an abundance of stitched surfaces. A seven-inch digital display augments physical gauges for vehicle settings, multimedia information, and other functions. An infotainment screen features prominently on top of the dash, but the overall feel is minimalist.

Climate controls are operated with physical buttons and knobs, making them easier to use than some touchscreen or touch-sensitive buttons increasingly common on vehicles.

The base CX-30 gets cloth upholstery, while mid-grade versions get leatherette coverings; only the top Premium Package gets real leather. But Select and Premium models come with an eight-way power driver’s seat with 2-position memory settings, a feature more common on more premium small crossovers. Most models come with dual-zone automatic climate control, too.

High-quality materials dominate the CX-30’s interior, making it worth a look for those who want something more than a small SUV that doesn’t shed its economy car roots. 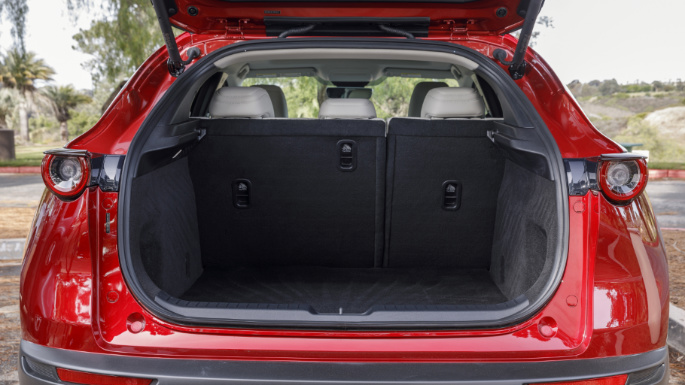 Looks force compromises sometimes, and while the Mazda CX-30 is practical considering its small exterior footprint, it’s far from the most spacious among its peers.

Front-seat space is considered ample for a small crossover, with wide front seats and decent head and legroom. But the rear seat is typically tight for a small vehicle, leaving those any taller than six feet a little cramped. That’s also typical of numerous competitors, however.

In terms of cargo space, the CX-30 offers 20.2 cubic feet behind the rear seats. Fold the 60/40 split rear seat down, and there is 45.2 cubic feet of room. Apart from the Hyundai Kona, that’s significantly less than similarly sized vehicles, which typically offer more than 50 cubic feet with the rear seats folded.

A power liftgate, unusual among small SUVs at this price, is standard on the Premium trim level and can make loading cargo somewhat easier.

TL;DR: The Mazda ticks many of the tech must-haves, but doesn’t set any new standards. 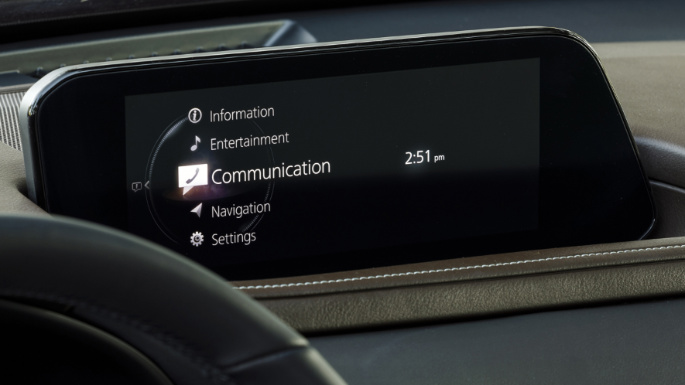 Using a new infotainment system, the Mazda CX-30 has most of what’s considered essential in terms of new car technology today. But techies may come away unfulfilled here.

The CX-30 uses the latest Mazda Connect infotainment system, which was first seen on the 2019 Mazda 3. Viewed through an 8.8-inch display on top of the dashboard, it’s a significant improvement on the first-generation system still found on most Mazda vehicles.

Unlike the older system, however, it’s controlled only by a rotary knob on the center console, not a touchscreen found on most rivals. The inability to touch the screen may frustrate some drivers at first, and the menus aren’t the most intuitive out there, but shortcut buttons on the console for various audio functions and a dedicated volume and seek knob help matters.

All models get two USB ports.

More likely to frustrate buyers is that Apple CarPlay and Android Auto are not available on the base model. And those systems, having been initially designed for touchscreens, are considered more tedious to use with the Mazda’s rotary controller.

Built-in navigation is only available as a dealer-installed accessory, which means most drivers will have to rely on the smartphone integration for maps and directions.

Ultimately, however, the Mazda’s infotainment system isn’t as easy to use as the touchscreen systems on rivals like the Buick Encore GX, Fiat 500X, and Jeep Renegade.

At least the CX-30’s climate controls are straightforward, with dual-zone automatic climate control standard on all but the base model. Physical knobs and buttons control airflow and fan speed, compared to some high-end small SUVs that use touchscreens or indistinguishable buttons.

Push-button start is standard across the board, but only the base model does without keyless entry. A 12-speaker Bose audio system comes on Preferred and Premium models, while that top Premium version includes a head-up display and a power liftgate, unusual features among mainstream small crossovers.

TL;DR: An extensive amount of driver assistance technologies are standard on every model. 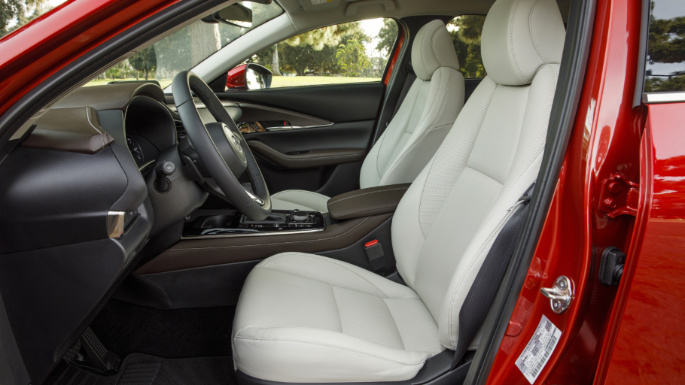 The Mazda CX-30 excels in the vehicle safety category, not only with its excellent crash test ratings but with the extensive level of technologies that may prevent a crash altogether.

All versions get forward collision warning and automatic emergency braking, along with a lane departure warning and prevention system, adaptive cruise control, and automatic high beam control. Select Package models and above add blind-spot monitoring and rear cross-traffic alert. Many rivals charge extra for these features, and even some premium brands lump these technologies into option packages.

TL;DR: The CX-30 is more lively and refined than most SUVs of its size and price. 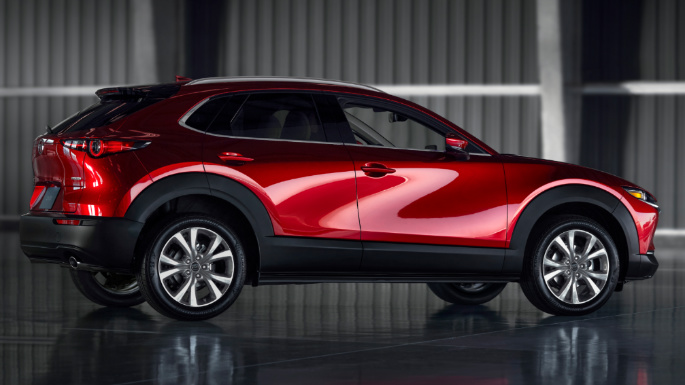 Based extensively on the Mazda 3 compact sedan and hatchback, it’s unsurprising the CX-30 exhibits similar driving characteristics. That also means it’s among the most involving small crossovers to drive.

Power comes from a 2.5-liter four-cylinder with 186 horsepower and 186 lb-ft of torque, mated to a six-speed automatic transmission.

Front-wheel-drive is standard, while all-wheel-drive is optional on all trims. This Mazda’s horsepower figure puts it well ahead of its mainstream rivals, and on par with the pricier Mini Countryman Cooper S and Volvo XC40 T4. Even the turbocharged Buick Encore GX, Fiat 500X, Hyundai Kona, Jeep Renegade, Kia Seltos, and Mitsubishi Eclipse Cross make as much as 30 horsepower less.

The downside is the Mazda’s added weight and six-speed automatic transmission hinder that power a little; some rivals like the Kia will feel noticeably quicker off the line. And most competitors use transmissions with as many as nine speeds or utilize continuously variable transmissions, to make better use of the engine’s power.

There are also complaints that the CX-30 doesn’t ride as well as some of Mazda’s other vehicles. And the CX-30’s handling isn’t as composed as that of the lower and lighter Mazda 3.

But that’s the tradeoff for a higher seating position and a taller vehicle. For those who prefer an SUV shape over a sedan or hatchback, the Mazda CX-30 offers a more enthusiastic driving experience than the typical SUV. 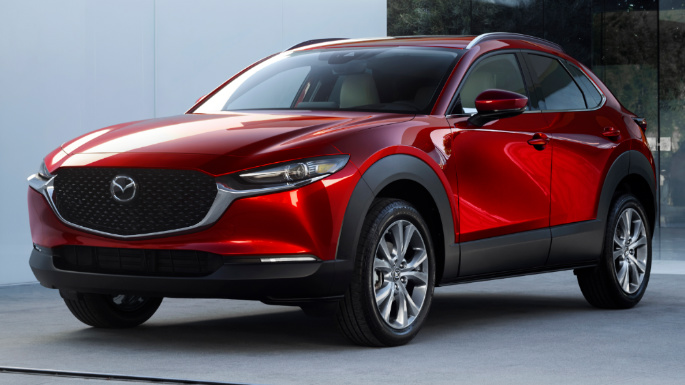 The 2020 Mazda CX-30 with front-wheel-drive is rated at 25 mpg city, 33 highway, and 28 mpg combined, according to the Environmental Protection Agency (EPA).

On the top Premium model with optional all-wheel-drive and cylinder deactivation, those ratings drop by one mpg in all categories for some models.

While those numbers best the less powerful Fiat 500X and Jeep Renegade, they fall behind models such as the Buick Encore GX, Honda HR-V, and Subaru Crosstrek – and even larger vehicles such as the Honda CR-V and Toyota RAV4. However, the Mazda CX-30 has more horsepower than many of its rivals that net better fuel economy ratings.

TL;DR: Base models are relatively well-equipped, but high-end versions are of middling value. 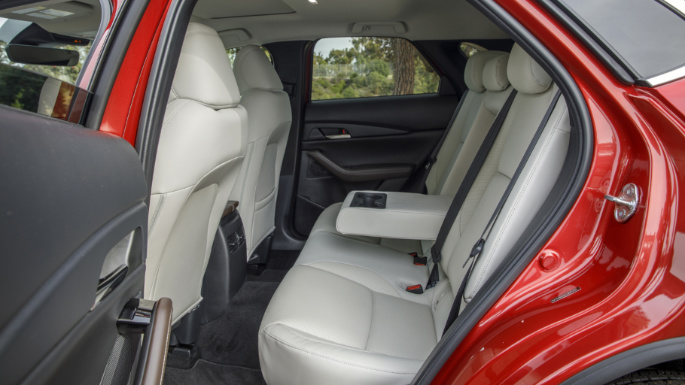 The CX-30 Preferred Package starts from $27,300 MSRP. In addition to the Select Package features, the Preferred includes an eight-way power driver’s seat with two-position memory for the seat and exterior mirrors, heated front seats, illuminated vanity mirrors, gloss-finish for the grille, and a 12-speaker Bose audio system with satellite radio.

The top-level CX-30 Premium Package starts from $29,300. It includes cylinder deactivation for the engine, as well as a power moonroof, adaptive headlights with accent LED lighting, roof rails, a power liftgate, leather upholstery, paddle shifters on the steering wheel, and a head-up display.

It certainly doesn’t undercut its key rivals on price, but the Mazda CX-30 may offer more substance than most mainstream small crossovers.

Mazda’s rigid equipment structures eliminate individual options between variants, however, so buyers who want a moonroof, for example, have to go for the most expensive Premium model. Satellite radio also only comes on the top two versions of the CX-30, and Apple CarPlay and Android Auto aren’t available on the base model – uncommon these days.

Many other automakers allow for at least a bit more option personalization so buyers don’t have to pay for a lot of features they don’t want or need.

Nevertheless, the Prefered Package, at just below $29,000, is generously equipped and probably the best buy among the CX-30 models.

At more than $30,000 for a fully-equipped model, the similarly sized Mazda 3 hatchback costs less even with its optional all-wheel-drive. A Mazda CX-5 with the same engine and all-wheel-drive may not have quite as many features, but it’s a significantly more spacious vehicle. And even well-equipped versions of the Honda CR-V and Subaru Forester, to name but a few, are more spacious than this Mazda.

But those who value refinement, quality, and styling will find much to like about the CX-30. It exudes class inside and out, offers numerous premium features, and has relatively good power and handling for a small SUV. That also puts it more on par with the Audi Q3, Mini Countryman, and Volvo XC40, which tend to cost as much as $10,000 more when similarly equipped.

Its premium-aping design and quality make the Mazda CX-30 a great value compared to some small SUVs, while compared to less expensive competitors, it aims higher than being entry-level transportation. And sporty handling and styling are icing on a very substantial cake.