A 256-horsepower, turbocharged 2.5-liter four-cylinder engine with a 6-speed automatic and all-wheel-drive.

The Mazda CX-50 is a new vehicle for 2023. It's Mazda's fourth SUV on sale now and is slightly larger and more expensive than the CX-5. And it's also the first Mazda built at a new factory in Alabama.

Would we buy one? Probably. The CX-50 is a highly refined compact SUV and does a convincing job of rivaling premium SUVs for more mainstream prices. But the related Mazda CX-5, while an older design, is also an accomplished premium SUV for less money. 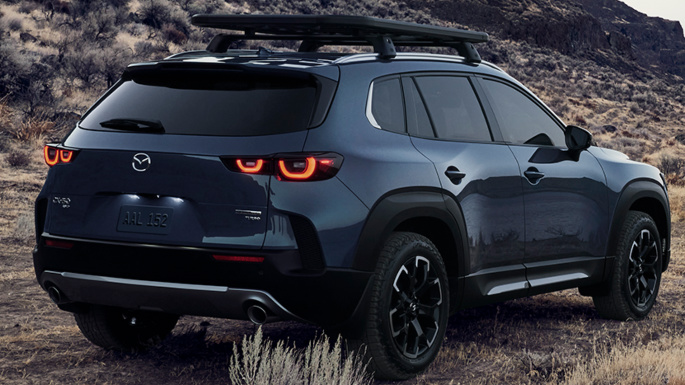 The 2023 Mazda CX-50 is an all-new vehicle in its lineup and its second compact SUV. Joining the long-standing and popular CX-5, the CX-50 is slightly larger and is pitched as a somewhat more upscale and versatile vehicle.

Both models are offered with two four-cylinder engines, with or without a turbo, and a 6-speed automatic and all-wheel-drive. It also rides on a longer wheelbase than the CX-5, as well as being slightly wider, according to Mazda’s specs. 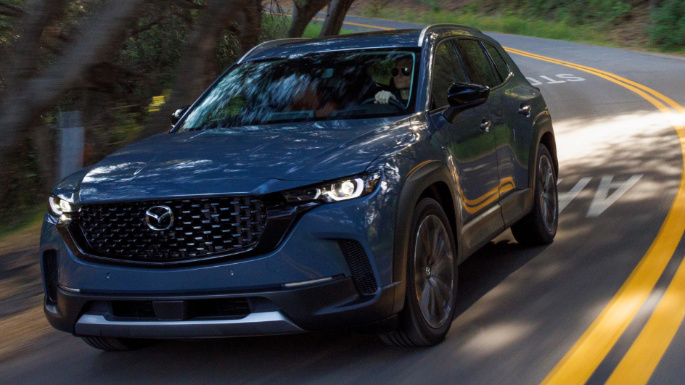 Mazda's vehicles tend to shine in how they drive, and the CX-50 is no exception. It may be larger than the CX-5, but that doesn't dull the driving experience too much. Communicative steering and controls meet a ride that isn't too harsh, even with the 20-inch wheels, and it combines to make the CX-50 one of the most entertaining compact SUVs at any price.

The CX-50 is also pitched as something of an off-road vehicle, unlike the very street-oriented CX-5. While the Ford Bronco Sport, Jeep Compass or Cherokee, Subaru Forester, or Outback can be more capable, the CX-50 boasts good ground clearance and has a standard all-wheel-drive. Mazda's selectable drive modes even include an off-road mode in addition to regular and sport settings and a towing mode on turbo models.

The standard 187-horsepower engine is likely adequate for how most owners will use the CX-50, but it isn't anything special. Even the turbo model we tested felt like it could use more grunt, though we did appreciate its livelier with its 320 lb-ft of torque.

And while the six-speed automatic escapes the drawbacks of the continuously variable transmissions (CVTs) found in many mainstream rivals, most conventional transmissions have seven, eight, or 10 speeds now. 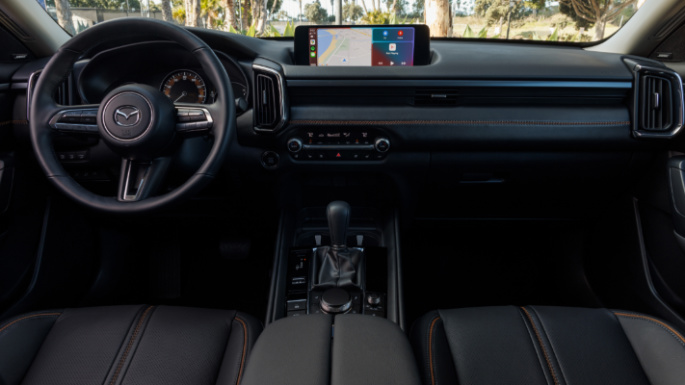 However, neither the National Highway Traffic Safety Administration (NHTSA) nor the Insurance Institute for Highway Safety (IIHS) tested the CX-50. But Mazdas tend to do well in crash tests, so the CX-50 shouldn't be an exception. 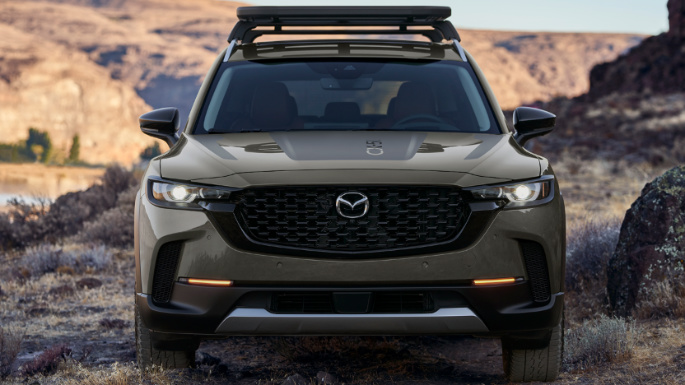 The base CX-50 starts at just over $28,000, and the least-expensive turbocharged model is in the $37,000 range. That's roughly $1,000 more than a comparable 2022 CX-5, which already runs a little more expensive than other mainstream compact SUVs.

And the base CX-50 is somewhat sparsely equipped, so it requires another $1,500 to step up to the Select model to get things like privacy glass, keyless entry, and dual-zone climate control. Because of Mazda's rigid equipment packaging, satellite radio and a panoramic moonroof require going up to nearly $36,000. That leaves buyers to consider which features are essential.

A loaded Turbo Premium Plus model pushes past $43,000, which is well out of the range of models like the Hyundai Tucson and Subaru Forester, even when factoring in the horsepower difference.

But it puts the Mazda in line with base versions of SUVs from Infiniti and Lincoln, for example, and those wouldn't have the same equipment at the same price. 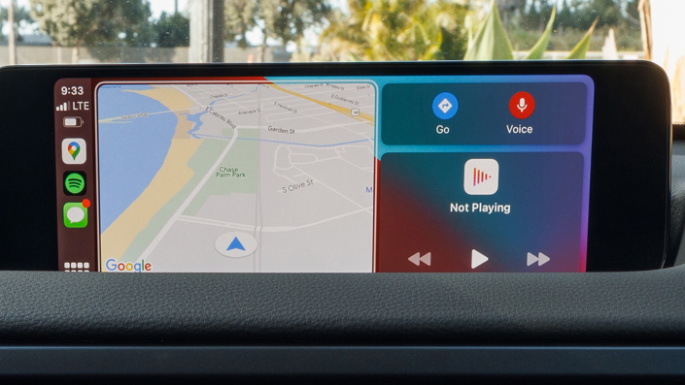 The new Mazda infotainment system launched in 2019, adding larger screens like the 10.25-inch version on all but the base CX-50. It also includes wireless Apple CarPlay on every model and Android Auto connectivity. But compared to simpler touchscreen systems on nearly every other competitor, Mazda's wheel-driven system is more complicated than it needs to be, and the menus can be confusing.

There are some other problems, too. For example, the base model doesn't include USB charging ports for rear passengers, and only the most expensive model gets wireless smartphone charging, despite the widespread wireless CarPlay. It's also the only version to get a 360-degree surround-view camera.

That said, there are some pluses. For example, a head-up display is widely available, as is a 12-speaker Bose audio system. These are upscale touches many mainstream rivals don't offer at all. 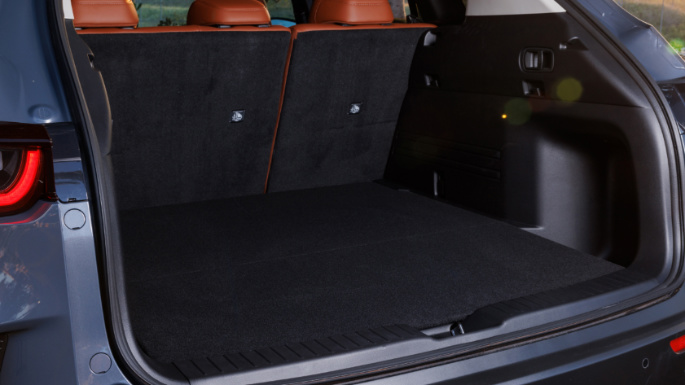 With 31.4 cubic feet of cargo space with the seats up and 56.3 with the rear seats folded, the CX-50 is usefully larger than the CX-5. But that vehicle is on the smaller end of the space ratings of the class. Still, the CX-50's upright shape doesn't impede too much on usable cargo, and it's still relatively low, so loading isn't a problem.

There’s significantly more legroom in the CX-50 than the CX-5, and it’s pretty good for any compact SUV. But headroom, strangely, is reduced. It’s worth a test drive to see if any of that affects functionality.

Towing capacity is up to 2,000 pounds with the non-turbo engine and up to 3,500 with the turbo engine. And ground clearance is up to 8.6 inches, depending on the model. That's considerably more than many of its road-oriented competitors. 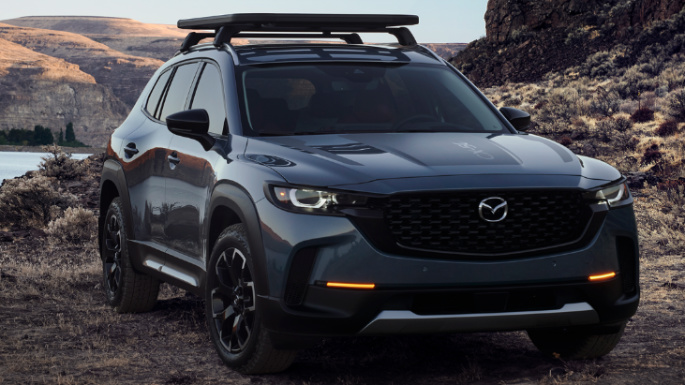 As it makes moves on premium brands, Mazda has included numerous upscale touches on every CX-50. Even the base model comes with 17-inch alloy wheels, while more expensive versions get the 20s. And the wider stance makes it look more aggressive than most rivals, save for the Bronco Sport.

The premium feel is most evident inside, though, with high-quality materials nearly everywhere. Only the base model comes with cloth upholstery, while most use leatherette or leather. But everything that's in the line of sight looks and feels good.

Controls are relatively simple, too, with physical controls for volume and climate settings. Rear passengers get an armrest and cupholders, too. But the 40/20/40 split-folding back seat that the CX-5 offered isn't here — it's a simple 60/40 split. 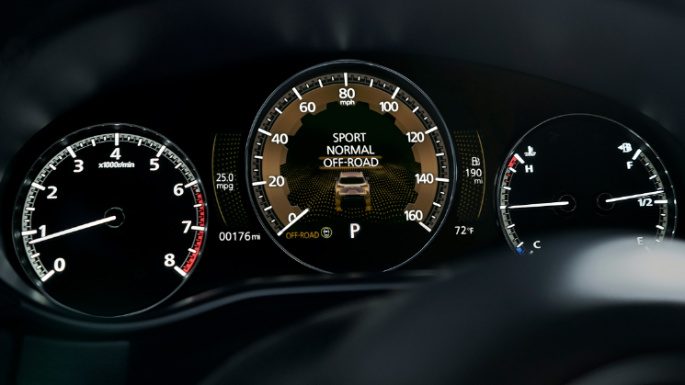 In our 330 miles of testing (in a loaded turbo model), we averaged 22.4 miles per gallon. That's about what we'd see on comparable vehicles with similar power -- be it a turbo four-cylinder engine or a V6.

Among its more upscale rivals, the Acura RDX averages 23 mpg, the Buick Envision 25, and the Mini Countryman 26 mpg.

However, more of the CX-50's long list of rivals offer hybrid, plug-in hybrid (PHEV), or full electric variants. Mazda says a CX-50 hybrid is in the cards but hasn't given many details. And the turbocharged engine only makes its full 256 horsepower on 91 octanes or higher, with 227 horsepower on 87. 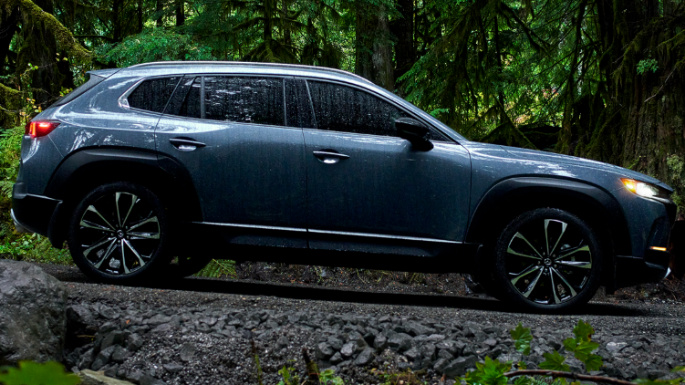 The 2.5 S Preferred Plus starts at $33,165. In addition to the Preferred's equipment, it adds a powered panoramic moonroof.

The 2.5 S Premium is priced at $35,625. It includes more equipment, such as an auto-dimming rearview mirror with a Homelink garage door opener, leather upholstery, 2-position memory settings for the driver's seat, and a 12-speaker Bose audio system with a 3-month SiriusXM satellite radio trial.

The 2.5 Turbo Premium starts at $40,775 and adds to the base Turbo power-folding side mirrors with 2-position memory settings, ventilated front seats, a heated steering wheel, 12-speaker Bose audio system, satellite radio, and a head-up display.

Finally, the top 2.5 Turbo Premium Plus is priced at $42,775. This was the model we tested and we came away impressed with how luxurious it felt, even for the money.

If it were us, we'd pick the 2.5 Turbo Premium. The CX-5 is still a worthy rival against mainstream SUVs like the Honda CR-V and Toyota RAV4 and the one to go for if you're shopping for those kinds of vehicles. As a slightly more upscale vehicle, though, the Turbo Premium includes many desirable features that put the CX-50 on par with a highly-equipped Subaru Outback or a base Volvo XC40 or Acura RDX.