The Mercedes-Benz C-Class is a compact sport sedan that the German automaker has been building since 1993. Until 2013, it was the smallest sedan Mercedes sold in the U.S.; it was then that the brand launched the entry-level CLA here. The C-Class nameplate was preceded by the Mercedes 190 sedan. Currently, the C-Class competes against models like the BMW 3 Series, Audi A4, Volvo S60, Lexus IS and ES, Infiniti Q50 and Acura TLX. 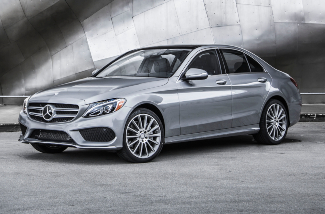 The 2015 C-Class was built on an all-new platform known as Modular Rear Architecture or MRA for short. The use of aluminum with a framework of high-strength steel reduces the car’s overall weight by over 200 pounds.

This generation is slightly larger than predecessors, causing some to call it the mini S-Class.

There are Sport and Luxury trims, with engine options including the C300's 241-horsepower 2.0-liter turbocharged inline four-cylinder or the C400's 3.0-liter turbo V6 that makes 329 horsepower. AWD is standard on the V6 and optional on the four-cylinder.

Later an AMG C63 S coupe and sedan was introduced that packed a 503-horsepower, 4.0-liter turbo V8 (the non-S AMG C63 had a mere 469 horsepower). On the other side of the efficiency spectrum was the C350e, a plug-in hybrid model gets 275 combined horsepower from a 2.0-liter turbo four-cylinder and an electric motor. A more sporty AMG C43 model was also introduced; it had a 3.0-liter turbocharged V6 that made 362 horsepower.

Three body styles were available: cabriolet, coupe and sedan (the wagon variant wasn't brought to the U.S.). The cabriolet has a roof that opens or shuts in 20 seconds via a switch in the center console, and when the top is down it is concealed entirely within the trunk.

2018 brought a mild update for the C-Class, beginning with standard halogen headlamps and LED DRLs. High-performance LED headlights or multi-beam LED headlights with ultra range high-beams are an option.

Updates to the interior include design elements as well as touchpads on the steering wheel for controlling displays. A comfort-control system links the settings for air fragrance and seat heating, climate control, massage and ventilation functions.

A nine-speed transmission is standard on almost all models, replacing the seven-speed automatic that was initially offered on this generation. 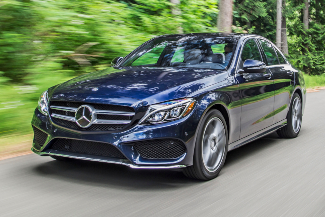 For the 2008 model year, the C-Class got a complete makeover including an extended wheelbase and a stiffer body shell. Its wheelbase grew by 1.8 inches and it featured more interior space as well. Despite the growth, this generation didn't weight much more than its predecessor.

The car was offered in Sport and Luxury trim lines, identified by differences in their grill (the Sport had the Mercedes three-pointed star emblem embedded in the grille while the Luxury trim used a hood ornament). A 4.9-inch display screen pops up in the dashboard to display infotainment settings.

A C63 AMG coupe and sedan packed a 6.2-liter V8 that made 451 horsepower; it was paired with a seven-speed automatic transmission. 2010 models got a tire-pressure monitoring system and a new steering wheel in addition to turn signal indicators on the side mirrors.

In 2012 the C Class got a mild refresh. The retractable cover on the infotainment display screen was eliminated and new LED taillights were added. The interior got a thorough overhaul that made it considerably more upscale than it was previously. This included the seats, instrument panel and dashboard.

A new C250 model was introduced that used a new 1.8-liter turbocharged four-cylinder engine that made 201 horsepower and was paired with a seven-speed automatic. 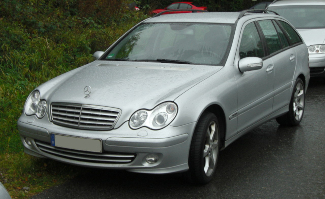 2001 brought a major redesign, with all-new safety features and improved sheet metal that was significantly more rounded than its predecessor.

2002 saw the debut of two new body styles: the C230 Kompressor Sport Coupe (a two-door, entry-level hatchback) and a C320 wagon. This was also the year that a new option -- the 4Matic all-wheel-drive system -- was added.

Later an AMG C32 performance model was introduced that used a 3.2-liter, supercharged V6 that made 354 horsepower. This performance variant was later replaced by the AMG C55 which used a 5.4-liter naturally-aspirated V8 that made 367 horsepower. The C-Class also received a new steering wheel as well as aluminum pedals and new front brakes, an updated suspension system and alloy wheels. In the U.S., 2005 models received a slight refresh. The interior was revised with a new dashboard and updated seats.

For 2006, a trio of new V6 engines was introduced (C230, C280 and C350) and the various trim levels' number designations no longer corresponded to their engine sizes. It was then that the hatchback and the wagon were discontinued in the U.S. market. 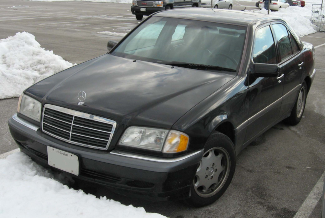 The first generation of models to bear the C-Class replaced the smaller and more down-market 190 models.

An AMG C36 performance model was later introduced; it used a 3.6-liter, six-cylinder engine that made 276-horsepower. Later in this C Class model's lifespan, this C36 was replaced by a C43 model; it used a 4.3-liter V8 that made 306 horsepower.

This generation of C Class was larger and heavier than the 190 it replaced but earned high marks for its highway cruising ability, stout six-cylinder engine and interior space.

From the beginning, the C-Class came equipped with a driver’s side airbag and ABS as standard features, with the passenger-side airbag becoming standard in 1995. 1997 brought front side airbags and brake assist, or BAS for short, and a new five-speed automatic transmission. For the 1998 model year, Mercedes gave the C Class a mild refresh. This included updated headlights and taillights, amid other updates. The C220 was dropped in favor of the C230 and the C280 now featured a V6 engine rather than an inline six.

This was the same year that saw the emergence of such forward-thinking options as BabySmart car seats, BrakeAssist and side-impact airbags. The C-Class added leather seating as a standard feature in 1999, the same year Mercedes added TeleAid, the Touch Shift auto-manual transmission, and free scheduled maintenance during the entire covered warranty period.