The three-row GLS-Class is the biggest SUV Mercedes makes, sitting atop a lineup that also includes the GLE, GLC, GLB, GLA, and G-Class.

This four-door luxury SUV was completely redesigned for the 2020 model year and is now in its third generation. As before, it seats six or seven passengers but this generation is more fuel-efficient, offroad-friendly and luxurious than the previous generation.

The GLS is also highlighted by a roomy cabin and powerful towing capacity; the 2020 version is ideal for large families that crave luxury.

This vehicle mainly competes with the BMW X7 and Land Rover Range Rover, as well as the Cadillac Escalade and Lincoln Navigator. A robust 3.0-liter inline-six turbo engine powers the base GLS 450 while an even more powerful 4.0-liter twin-turbo V8 engine powers the GLS 580. The EQ Boost starter generator on both engines makes either powertrain accelerate swiftly while providing greater fuel efficiency by allowing the engine to shut off at idle or while coasting.

Families truly in a hurry -- and with deep pockets -- can choose the Mercedes-AMG GLS63 version, which comes with 603 total horsepower.

TLDR: Boasting a larger platform and longer wheelbase than its predecessors, this SUV has a sleek, muscular exterior with several styling updates. 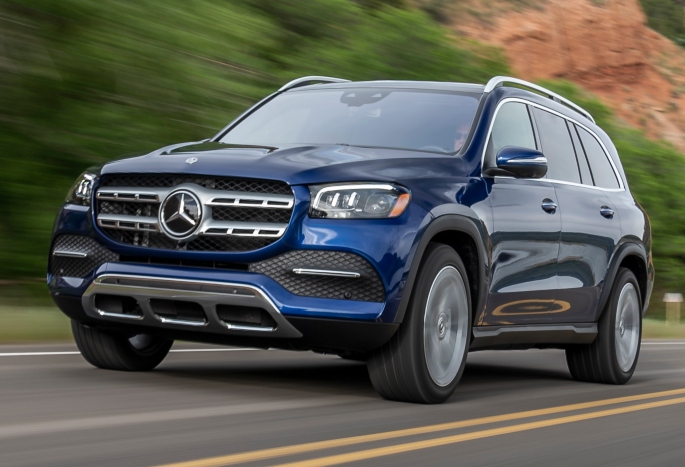 Styling-wise, the 2020 Mercedes-Benz GLS is sleeker than before but it also has a strong, sturdy aesthetic to highlight its offroad potential.

The front boasts an octagonal radiator grille, while the front bumper features a chrome faux skid plate beneath it along with bone-shaped air inlet grilles. The hood has two power dome bulges right above the impressive powertrain. This model's multibeam headlights feature 112 LEDs per headlamp and a 650-meter range, which is the maximum legal range and farther than that of most rivals. 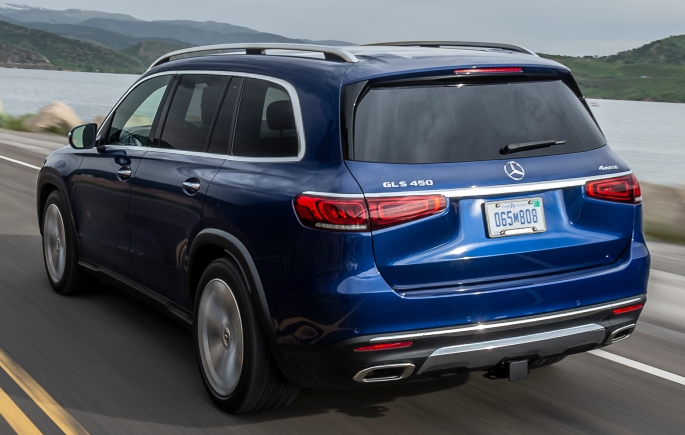 Despite the 2020 Mercedes GLS's large size, this luxury SUV has a sleek rear, with chrome under guard beneath the bumper and muscular, rounded shoulders framing LED taillights.

The GLS's cabin boasts seamlessly blended wood, leather, and aluminum surfaces and an optional suede headliner. Most of the interior's hard plastic is well-hidden, and the piano-black trim of previous models has been toned down. Also, the four round vents in the center stack of the previous GLS have been updated to rectangles. Some shoppers may take issue with the aluminum trim and fake plastic vent beside the infotainment display, as they lack the warmth of other Mercedes vehicles. 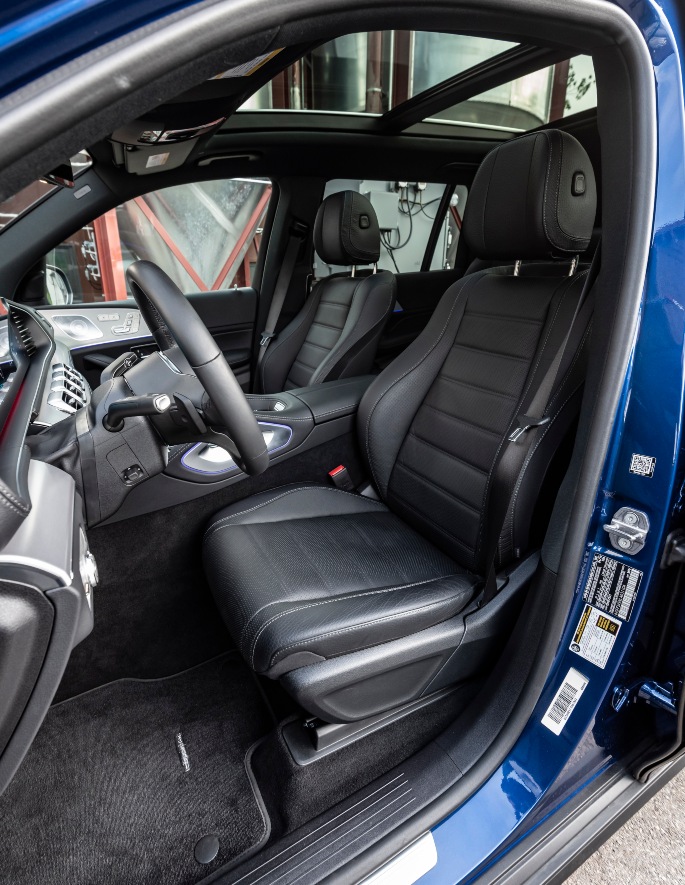 The 2020 Mercedes GLS features three rows of leather-upholstered seats with supportive cushions. All of the seats in the vehicle are power-operated and optional massagers can be had for the front seats. No levers or handles are needed to lower seats for cargo, as the second- and third-row seats have buttons for automatic retraction. The passenger space in the GLS is ample, and while there is more leg and headroom in the third row than before, taller adults will still want to head to the front or second row of seats.

An optional panoramic moonroof and small sunroof in the third row add flair to this luxury SUV, while a 12.3-inch touchscreen sits in the dashboard. The screen can be operated by touch or via the touchpad mounted in the center console. The driver is also treated to a 12.3-inch digital display screen that offers some degree of customization. If the middle bench in the second row isn't comfortable enough, the optional captain's chairs make this row even roomier while improving third-row access. 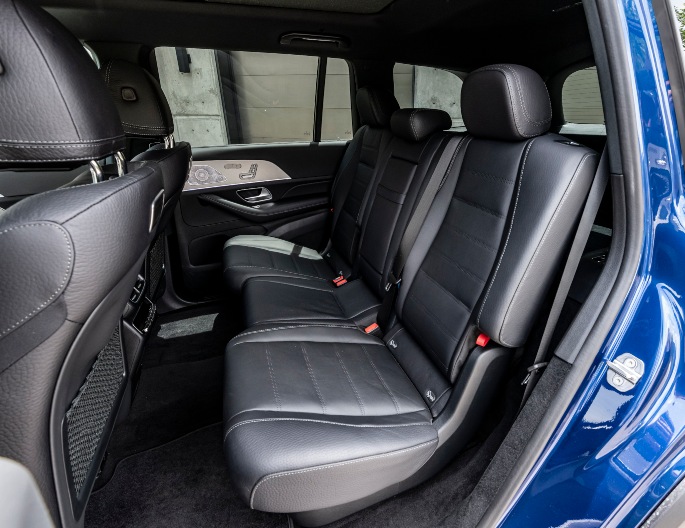 Reaching the third row is as simple as pushing a button on the back of a second-row seat to tilt and slide it. An LED accent light bar provides ambient light in the cabin, and heated seats are available. 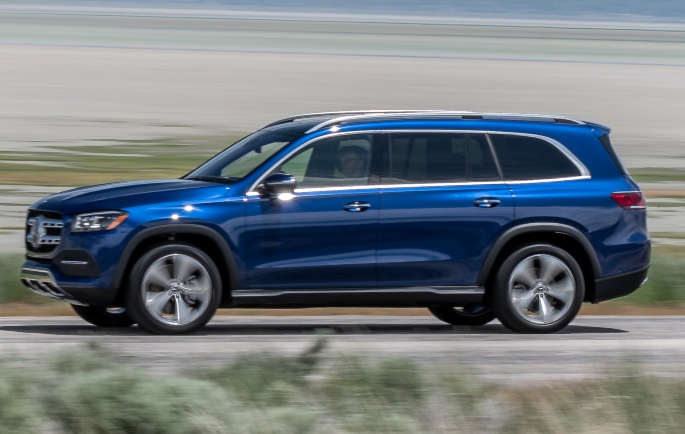 Both the second and third row of seats fold almost entirely flat. This GLS can tow up to an impressive 7,700 pounds when properly equipped. While it doesn't come with roof racks, this Mercedes does come standard with a power liftgate for convenient access to the rear area.

TLDR: A wide range of technological amenities make driving the GLS enjoyable, such as the voice- and gesture-operated MBUX infotainment system.

The 2020 GLS-Class comes with the MBUX infotainment system, the most recent Mercedes-Benz infotainment system. Like Apple's Siri or Amazon's Alex, MBUX responds to voice commands if you say, "Hey, Mercedes" and then give it something to do. The two full-color displays of the MBUX system make using it easy, and MBUX responds to gesture commands thanks to an overhead camera.

If you make a scissor motion, for example, you can trigger the driver's seat massage feature. However, the camera doesn't always notice gestures. You can also interact with MBUX via the pair of thumb pads on the steering wheel. Reaction to this new MBUX system has been mixed, but we found it generally useful and intuitive in our testing. 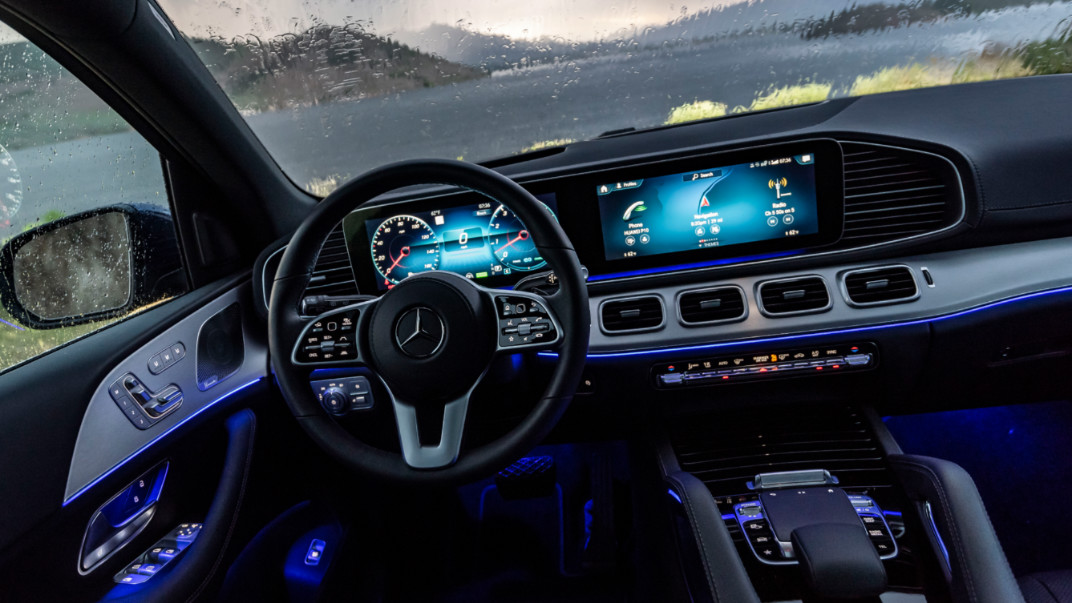 Apple CarPlay and Android Auto come standard with the 2020 Mercedes GLS, and provisions for a rear entertainment system are also available.

The optional Executive Rear Seating package offers passengers in the second row a convenient folding console and a seven-inch tablet for operating MBUX.

You can also get a five-zone climate control system, and the 2020 Mercedes GLS comes standard with keyless entry and augmented reality navigation.

A Burmester audio system with surround sound is also available.

The GLS features 11 USB ports, four of which are USB-C ports.

This vehicle comes with a wide range of safety features, including the Mercedes Intelligent Drive active safety system found in other Mercedes-Benz vehicles. Without requiring driver input, this Mercedes vehicle can slow when it detects stop signs or turns, as long as the cruise control system is activated.

The vehicle's lane departure system nudges it into its proper lane using the brakes rather than the steering wheel, which can be jarring at times. Both the GLS 450 and GLS 580 come with emergency braking, automatic park assist and adaptive cruise control ideal for heavy traffic. The SUV's adaptive cruise control has speed-limit and route-based assistance for seamless travel. 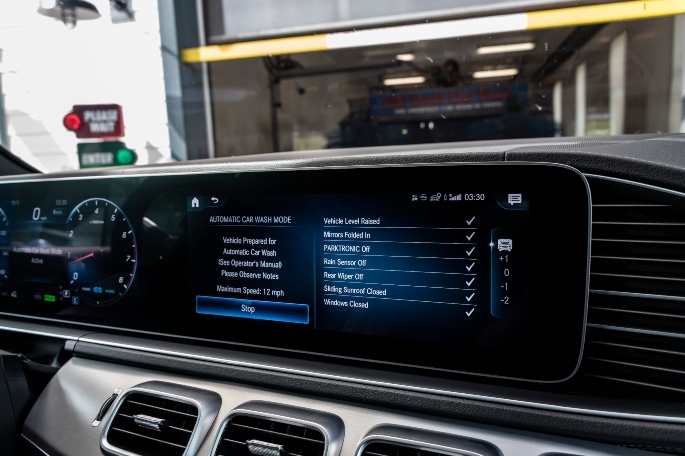 The GLS also comes with an off-road mode in which the SUV judges your driving skills, such as your articulation and obstacle clearance, rating you on a 100-point scoring system.

Our tester also came with the optional E-Active Body Control suspension system, which first came out on the smaller GLE-Class. It combines electro-hydraulic dampers and air springs for a smoother ride. It absorbs bumps easier by scanning the road to adjust its suspension in advance, and it keeps the vehicle feeling stable and makes maneuvering around corners easier. Plus, if the vehicle gets stuck in the mud, the system can rock the SUV back and forth to free itself.

This vehicle's other driver assistance features include pedestrian detection and evasive maneuvering. The GLS can share information about driving conditions with other vehicles on the road, and it has vehicle-to-everything communications to anticipate obstacles. The SUV's Pre-Safe systems even prepare the vehicle and its occupants for crashes.

TLDR: A powerful engine with an EQ Boost starter generator gives this SUV an impressive performance on the road.

A 3.0-liter six-cylinder turbocharged engine powers the base GLS 450. This engine can produce an impressive 362 horsepower and 369 lb-ft of torque, and it's mated to a 48-volt electric motor, the EQ Boost, which serves as an integrated starter generator. The EQ Boost can briefly provide an extra 21 horsepower and 184 lb-ft of torque to the vehicle's engine.

A 4.0-liter V8 twin-turbo engine powers the GLS 580, which was the model we tested. This engine gets 483 horsepower and 516 lb-ft of torque, and it's mated to the EQ Boost as well. This was more than enough power to rocket the GLS to triple-digit speeds so unless you really need the added power of this V8, the smaller six-cylinder version should be more than adequate.

All-wheel-drive is standard on all models, as is a smooth-shifting nine-speed automatic transmission with manual mode.

The GLS has up to 8.5 inches of ground clearance, allowing it to traverse shallow water or uneven terrain offroad. Tightly controlled airflow in the cabin keeps wind noise to a minimum for a calm drive. The braking system is highly responsive.

TLDR: The GLS is one of the most fuel-efficient luxury SUVs of this size on the market.

By comparison, the corresponding 2019 Mercedes-Benz GLS earned 16 mpg in the city and 22 mpg on the highway for a combined 18 mpg rating. The EPA states that this boost in efficiency can save drivers about $400 per year in fuel over the old car.

The EPA rated the 580 trim level at 16 mpg city, 21 highway, and 18 combined. One reason the GLS received fuel economy that the EQ Boost system takes allows the engine to shut off at idle or when coasting.

The 2020 GLS is one of the most fuel-efficient luxury SUVs on the market. The BMW X7, for example, has a combined fuel rating of 17 mpg, while the Lexus LX 570 and Infiniti QX80 both get 15 mpg. The Lincoln Navigator, which also uses a turbocharged six-cylinder engine, has a combined rating of 18 to match the 2020 GLS 450.

Unfortunately, the 2020 Mercedes-Benz GLS doesn't offer a plug-in hybrid version or a diesel.

TLDR: The price for a GLS starts high and gets higher as you add amenities.

The GLS 580, meanwhile, starts at $97,800. Adding amenities to the vehicle, such as E-Active Body Control or extra active safety equipment, can bring its cost well above six figures -- our loaded tester clocked in at $120,350.