Powertrain: EQS450+ models are equipped with an electric motor on the rear axle putting out 329 horsepower and 406 pound-feet of torque.

EQS580 models are equipped with motors on both front and rear axles for an all-wheel-drive output of 516 horsepower and 611 lb-ft of torque.

With Both powertrains the EQS stores energy in a 107.8 kWh lithium-ion battery pack.

The all-new EQS is Mercedes's first entry into the luxury electric vehicle segment and a flagship model for the Mercedes-Benz brand in 2022.

Would we buy one? We'd probably skip this one. 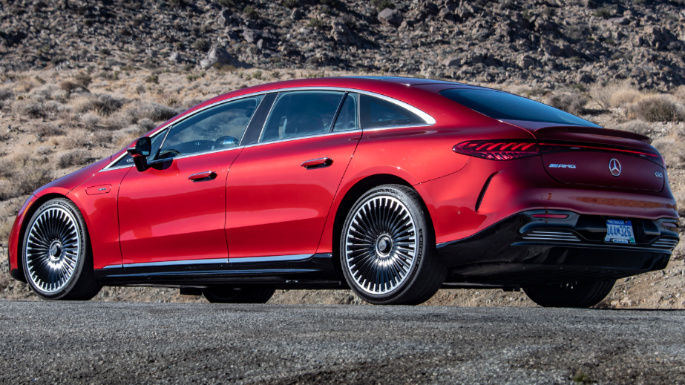 The Mercedes-Benz EQS is Mercedes' first admission that the future is electric. The flagship sedan is an all-electric alternative to the vaunted Mercedes S-Class, and it does a decent job upholding the family name.

Beyond pure luxury, the EQS is an impressive and forward-thinking electric car. Its body is shaped for aerodynamic efficiency and its interior is shaped by the included technology and gadgets, with plenty packed in to satisfy the sophisticated buyers in this market.

Being a top-tier luxury vehicle, the EQS offers a range of exciting features including interior air quality monitoring with fragrance spray, fingerprint-based driver profiles, different sound profiles to complement its electric drivetrain, and a massive interior screen that covers most of the dash. Outside, the body is sculpted to cut through the air but still has that Mercedes cache, including plenty of Mercedes-Benz and EQS branding, prominently displayed.

The EQS doesn't match the Tesla Model S, which is the category leader, for range or outright speed, but it does have more than enough juice to handle most commutes and enough power to get to freeway speeds regardless of which trim level you select.

The EQS competes with the Audi E-Tron GT, Porsche Taycan, Tesla Model S, and the Lucid Air, but is largely trying to lure customers with more of a focus on luxury that the other offerings do not have. This is the car for buyers who would lean toward an S-Class, but who are looking to go electric. 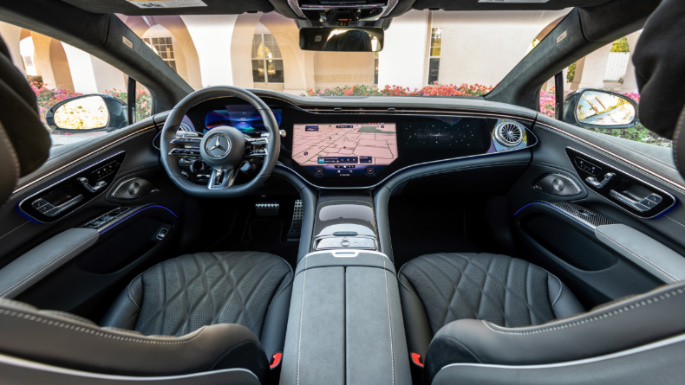 The EQS includes a standard suite of safety features that is both impressive and expected for a vehicle in this price range and segment.

In cars equipped with the head-up display, a line indicates when the adaptive cruise is locked onto the vehicle in front of you. This feature is reassuring, informational, and interesting to use.

Crash test and safety ratings from the National Highway Traffic Safety Administration (NHTSA) and Insurance Institute for Highway Safety (IIHS) were not yet available as of the time of this writing. 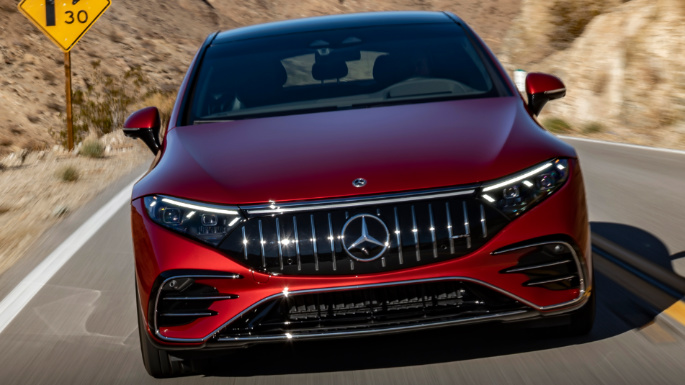 The base price of the EQS is higher than the starting price of all of its competition, but when competitors are upgraded to compete with the luxury of the electric Mercedes that gap shrinks.

Top trims of competitive models actually cost much more than a fully loaded EQS, though they deliver much higher horsepower and other performance numbers. A high-performance variant, the Mercedes-AMG EQS 4Matic+, is available for those that need more power, but it is not included in this review.

Upgrading to the AWD powertrain adds a steep cost, so for those who don't need the additional traction or care about 0-60 MPH times and top speed, the RWD EQS450+ is the way to go.

As with all high-end luxury vehicles, a certain amount of depreciation is to be expected. The reliability of this all-new Mercedes platform is still somewhat unknown, so maintenance and long-term ownership costs cannot be predicted. No oil changes or combustible fuels are required, so there will be some savings in those categories. 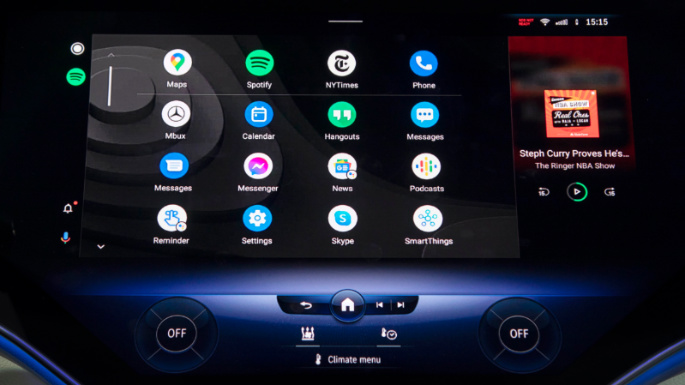 A 360-degree camera system can assist while driving and act as a security monitor for the vehicle while parked.

There are 6 USB-C ports and a wireless charging pad to keep personal devices powered up, as well as a 64-color ambient lighting system.

THE MBUX touchscreen infotainment system is one of the best in the industry; we found it responsive, easy to use, and intuitive. Upgrading to the optional MBUX Hyperscreen only adds to the functionality of the excellent system (though our test model didn't have this upgrade).

The Hyperscreen consists of three screens, one in the instrument cluster, one in the center of the dash, and a passenger display that add up to a whopping 56 inches of total screen space. This setup controls many of the same functions as the central display but within easy reach for front-seat companions.

It may be nitpicky, but the massive Hyperscreen huge surface does cause an annoying glare in certain lighting conditions. The large screen and other shiny plastic areas are also a magnet for fingerprints. 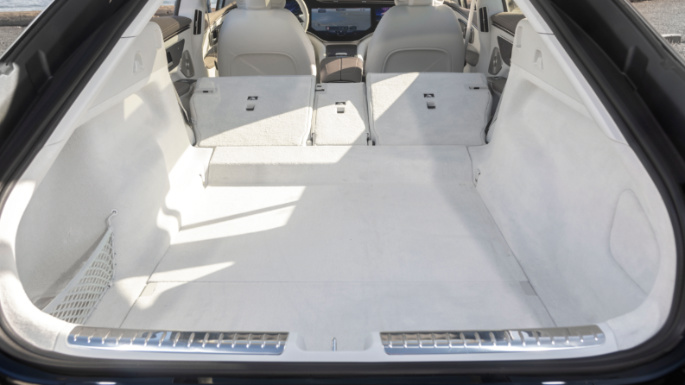 At the most basic level, the EQS can comfortably transport four or five adults in the highest levels of comfort. It also has a large trunk and plenty of clever storage for their stuff.

One disappointment is the lack of a front trunk. Many electric vehicles, including those in direct competition with the EQS, offer a frunk, with extra storage where the internal combustion engine would normally reside. Rear storage is generous and easily accessible thanks to the hatchback-like opening.

Despite its aerodynamic shape, the EQS has plenty of headroom in the rear seat, which can be an issue in some of the completion.

The EQS is more practical and comfortable than a luxury SUV and will meet the needs of most people without using a drop of gasoline. 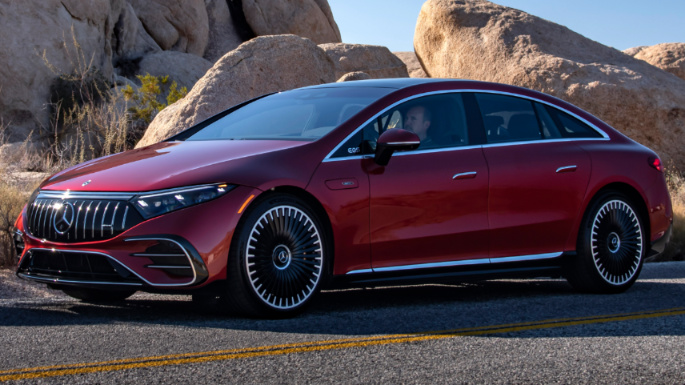 The interior design of the EQS is the bellwether of the class. Not only is the interior impeccably assembled of high-quality materials, but controls and screens also are in sensible places and integrated into the overall design aesthetic.

As to be expected the front and rear seats are comfortable for even long trips. Front seats are heated and ventilated in base models. Upgraded models include rapid heating and massage functions for the front seats, as well as heat and ventilation for the rear. Yet we were surprised (and disappointed) to see too much cheap plastic throughout the cabin; ditto for the rear seat amenities that were sorely lacking for a $100,000 vehicle.

Fit and finish is an area where the EQS is set apart from the class, particularly when it comes to the Lucid Air and the Tesla Model S.

Competitors from Audi and Porsche are well built but have a split focus between being sporty and luxurious. The EQS is a pure luxury vehicle with all of the qualities that entail.

The EQS sedan is certainly stately, but the exterior styling is polarizing. The shape is designed for a low drag coefficient, which leads to a shape that some find unappealing. The future-oriented look means the EQS just doesn't have the stately curbside presence of its traditional S-Class counterpart. That's a problem for a $100,000 vehicle. 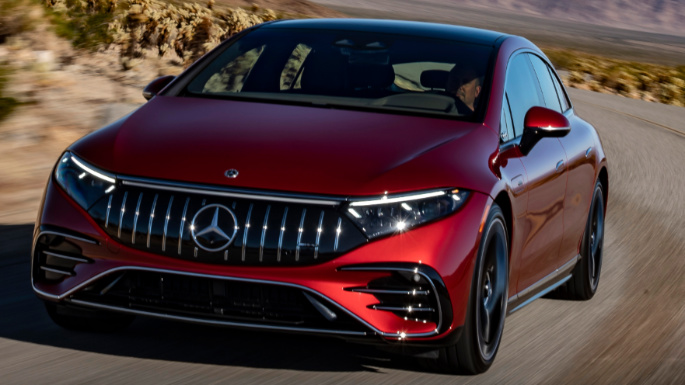 The EQS has a supple ride that both absorbs road imperfections and feels stable at higher speeds. It lacks the sporty feel of offerings from Porsche or Audi but is more refined than any other car in the segment.

The standard Airmatic air suspension adjusts firmness and ride height to deliver the best ride for the conditions. The intelligent system can also lower the vehicle at speed to optimize aerodynamic efficiency and extend range.

The steering feel is plush, but communicative enough for a large luxury vehicle. Mercedes also includes rear-axle steering with 10 degrees of articulation. This function offers better handling at speed as well as increased maneuverability in tighter low-speed situations.

A weak point for the EQS is braking, with a squishy pedal feel that means you have to press hard to reign in the hefty vehicle. The EQS also lacks the one-pedal regenerative braking experience of many modern electric vehicles, even those with much lower price tags. Paddle mounted regenerative braking adjustment behind the steering wheel is an intuitive way to adjust the amount regen.

We also were disappointed in the relatively low horsepower figure for the 450+ model we tested. 329 horses is puny compared to a Tesla Model S for the same money (which has twice that); it's also just not enough for this large, heavy luxury sedan. Even the 516 horsepower on the more expensive EQS 580 isn't particularly noteworthy. 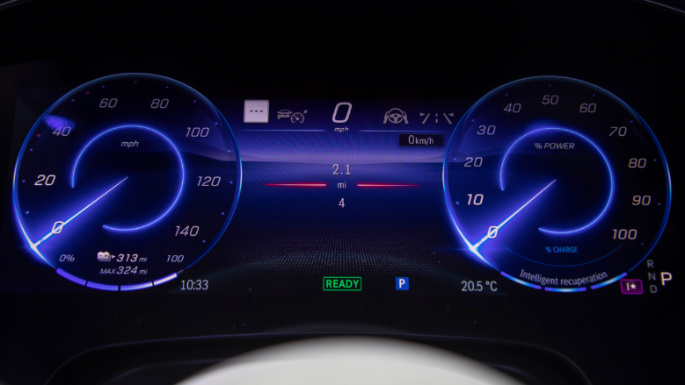 The EQS gets an EPA estimated 350 miles of range in a rear-wheel-drive configuration, and 340 when equipped with the dual-motor all-wheel-drive. During our week with the car, we found that 350 miles on a single charge was conservative; if you worked hard you could probably hit 400 miles.

These numbers are better than offerings from Porsche and Audi, but lag behind the longest range Tesla Model S as well as the Lucid Air.

Charging times are competitive with other top-level EV's. Charging from 10 to 80 percent at DC fast-charging stations will take about 35 minutes. Charging via a 240-volt Level 2 charger takes a little over 11 hours to get from a 10 percent charge to a full battery.

For cars with batteries this large, charging on a normal home outlet would take multiple days. Buyers in this market should strongly consider installing Level 2 charging at home. 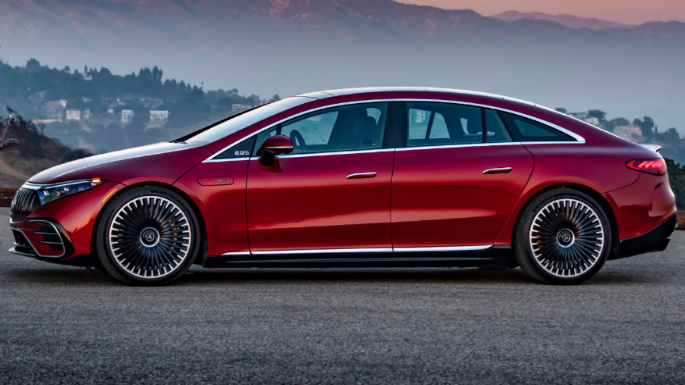 Entry-level EQS450+ Premium trim has a starting MSRP of $103,360. Even in base trim, the EQS includes all of the features you would expect of such an expensive luxury vehicle. Heated and ventilated front seats, panoramic roof, steering wheel-mounted touch controls, dual-zone automatic climate control, premium sound system, a power liftgate, and a good suite of safety and driver-assist features. All EQS450+ trims are powered by a single motor mounted to the rear axle, putting out 329 horsepower and 406 pound-feet of torque.

Stepping up to the EQS450+ Exclusive trim raises the price to $106,750 and adds some special luxury touches. Front seats add a rapid heating and massage feature, the HVAC system is upgraded to include the Air-Balance air purification system with fragrance functions. The trick head-up display is also included in the executive model.

The aptly named top trim level, Pinnacle, starts at $109,560. Pinnacle trim adds heat and ventilation to the rear seats, as well as additional wireless charging. A pop-up on the Mercedes website present at the time of this writing indicated that some features were restricted due to the worldwide microchip shortage. The Hyperscreen was not listed as standard or optional equipment for any EQS450+ model.

All-wheel-drive models are designated EQS580 4Matic and share the same trim levels, but add the additional electric motor to the front axle for a total output of 516 horsepower and 611 lb-ft of torque. The AWD and extra power add just under $17,000 to the price of each trim with Premium models starting at $120,105. Exclusive trim is at $123,560, and the EQS580 Pinnacle pricing starts at $126,360. EQS580 Exclusive and Pinnacle trims include the MBUX Hyperscreen 56" glass dash with three integrated touchscreens.