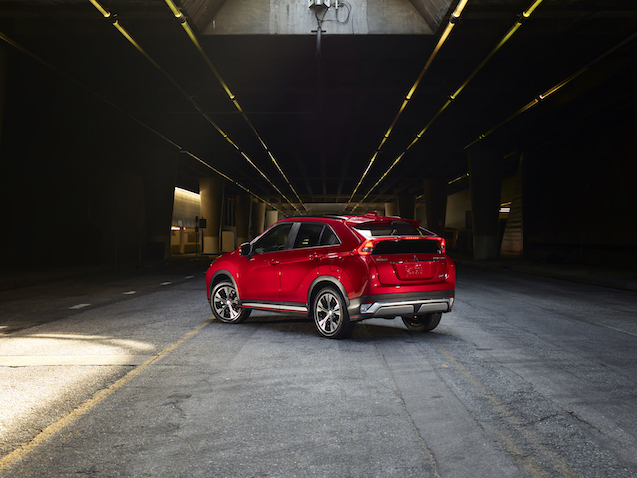 The Eclipse Cross is a compact crossover that was all-new for the 2018 model year. Mitsubishi revived the Eclipse name from a sports car that the brand produced from 1989 to 2011. The Eclipse Cross doesn’t share anything with the car that preceded it, other than its name, but the crossover’s design is one of Mitsubishi’s boldest efforts in years.

With a unique split rear window and an aggressive stance, the Eclipse Cross is easily one of the most visually striking compact crossovers on sale today. Higher trims get 18-inch wheels, but even the 16-inch wheels that come standard on the base trim fit the Eclipse Cross’ sporty profile.

The entire Eclipse Cross lineup is powered by a 1.5-liter turbocharged four-cylinder engine that has 152 horsepower and 184 pound-feet of torque. The engine is mated to an “eight-speed” continuously variable transmission and power is sent to either the front wheels or all four via the optional all-wheel drive, which is standard on all but the base ES trim.

There are five main trim levels for the Eclipse Cross: ES, LE, SP, SE, and SEL. All-wheel drive is an optional upgrade for the base ES trim and standard for all others.

Though it’s technically a compact crossover, the Eclipse Cross’ size and price put it into competition with vehicles that fall into the subcompact category as well. New car buyers may shop the Eclipse Cross against vehicles like the Honda CR-V, Honda HR-V, Toyota CH-R, Toyota RAV4, or the Kia Sportage. 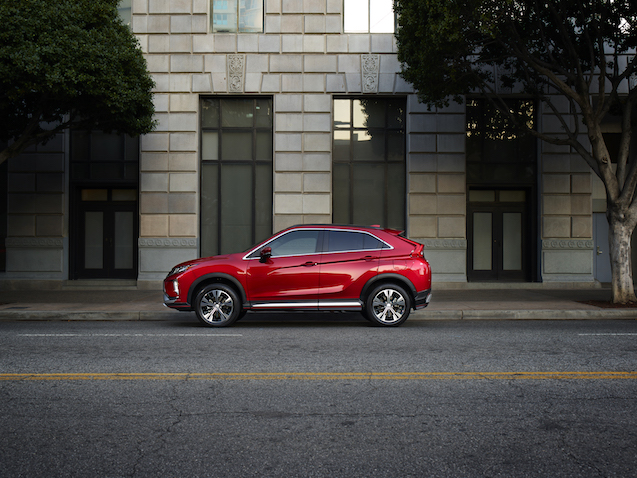 The Eclipse Cross’ options in higher trims can be quite generous, but the base ES trim is missing features like Apple CarPlay and Android Auto. And the Eclipse Cross only makes available on its top two trims advanced driver-assist features that are standard on most trims of competitors like the Toyota CH-R and RAV4, Honda HR-V and CR-V, and Kia Sportage.

Fun: The Eclipse Cross isn’t fast, but it backs up its sporty looks with an engaging ride and nimble handling. The available all-wheel-drive system – which Mitsubishi calls “All Wheel Control” – works well to keep power going where it needs to, even over rough and uneven surfaces like gravel roads. Turn-in is fairly sharp, especially compared to others in its class.

Style: The entire compact crossover segment has been moving away from the “econobox” style that has plagued it for years, shifting toward a more exciting direction. But the Eclipse Cross goes above and beyond this with a truly striking design. The split rear window adds a futuristic look to the Mitsubishi, and while it can complicate rear outward visibility in some circumstances, the look is exciting and fresh.

Interior: Mitsubishi’s build quality and interiors have come a long way in recent years, but there have still been some rough edges like exposed bolts and cheap-feeling hard plastics. Not so here. The Eclipse Cross, even in its most basic form, feels well-constructed. Despite the generous inclusion of plastic trim pieces, the interior panels and controls are solid and properly weighted. The SEL trim’s leather is soft and remains comfortable on long trips, and the lower trims’ fabric doesn’t feel thin or cheap. Our SEL tester also had a unique second sunroof that let in plenty of light for second-row passengers. 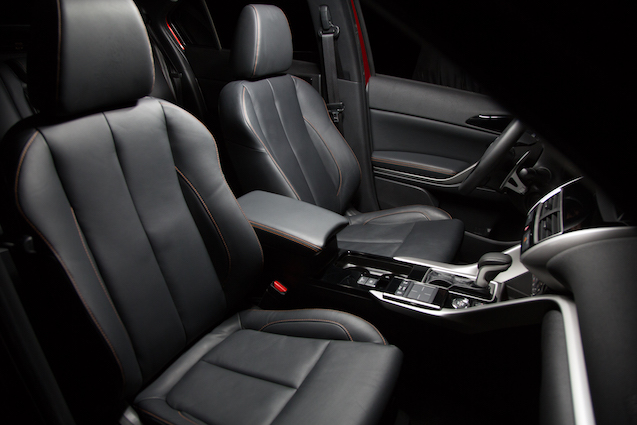 Underpowered: Even though the Eclipse Cross’ looks and ride are on the sporty side, the powertrain lets it down. The 1.5-liter’s 152 horsepower just isn’t enough to motivate the Eclipse Cross with any level of gusto, and the continuously variable transmission causes the engine to wail and whine under acceleration. Around town, it takes too much throttle to get going and pull into traffic. That said, once things are in motion, the Eclipse Cross can reach highway speeds and even pass without too much trouble.

Thirsty: Let’s be honest, most people would be happy to get a combined 26 mpg, but with a 1.5-liter engine and front-wheel-drive, the numbers should be better. The Kia Sportage nearly reaches the Mitsubishi’s fuel economy, coming in at 25 mpg combined, but has a much more powerful engine and better acceleration. In our week with the SEL trim, which has all-wheel drive and an EPA estimated 25 mpg combined, we met the advertised numbers in mixed driving. 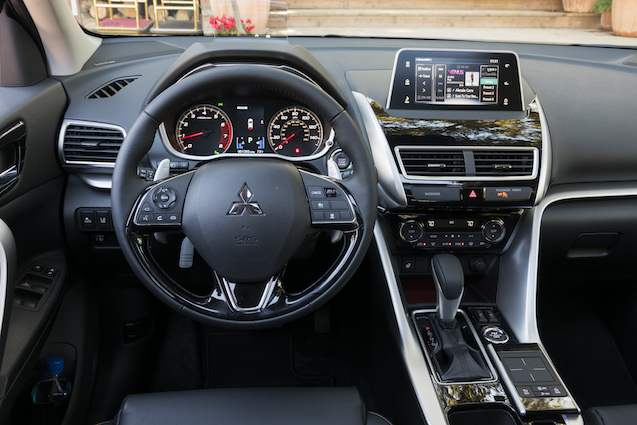 Lacking Advanced Safety Features: It’s true that competitors’ crossovers don’t come standard with things like blind-spot monitors and rear cross-traffic alerts. But in many cases, those items can be added on as options on lower trims (like the CR-V EX). The Eclipse Cross doesn’t even have an available options package until you step up to higher trim levels. Even then, only blind-spot monitoring, lane change assist, and rear cross-traffic alerts are standard. Auto high beams, forward collision mitigation, lane departure warnings, and adaptive cruise control have to be added separately, and for more money. 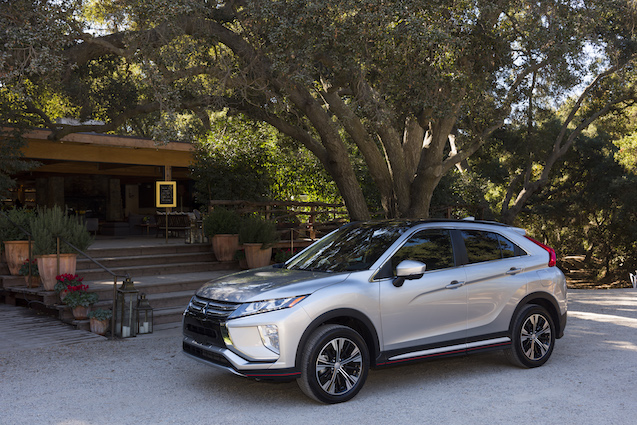 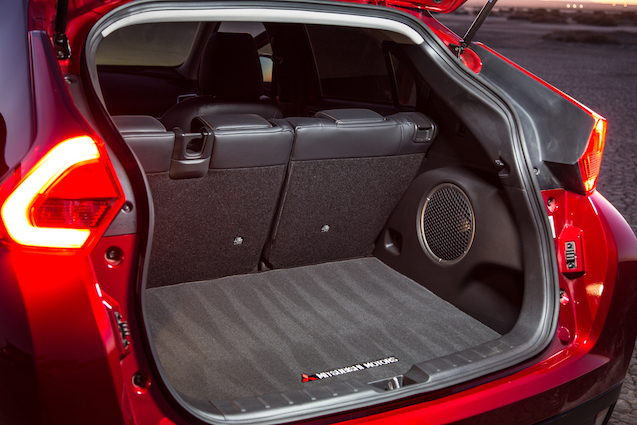 All-wheel drive can be added to the ES trim for an additional $600. 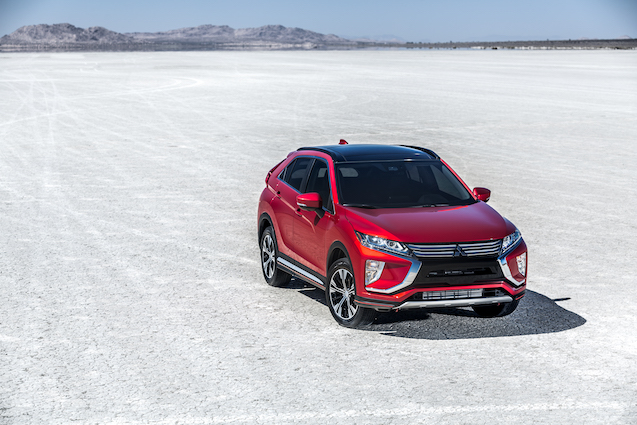 The range-topping SEL trim has a starting price of $28,195 and comes with leather upholstery, a power driver’s seat, a head-up display, and a multi-view rearview camera.

If we were buying the Eclipse Cross today, our pick would be the SE trim, which includes most of the premium features that the SEL trim has but costs a few thousand less. It also lines up more competitively price-wise against others in the segment.

The compact crossover segment is a tough place to do business in 2019, and the Eclipse Cross’ in-between size and price puts it in the crosshairs of a variety of vehicles in different classes. Every brand offers at least one vehicle in the compact arena, and some even offer two, making it hard to break through the noise. The Eclipse Cross is a strong effort from Mitsubishi, but there are some real standout vehicles from other brands that take our money first.

Ford’s Escape is in the final year of its current generation, as the 2020 model was just announced. Even so, the current-gen 2019 Escape is fun to drive, packed with tech, and priced competitively against the rest of the field.

The Honda HR-V is smaller, cheaper, and more economical than the Eclipse Cross, but can grow expensive in higher trim levels. Even with its pint-sized proportions, the HR-V has a usable back seat and cargo area. The Honda CR-V, while more expensive, has a comfortable and well-equipped interior, generous cargo space, and economical engines.

The Kia Sportage is quite fun to drive and comes standard with a few advanced safety features. The 2020 model has been refreshed with an updated appearance and tech, but the 2019 model is still on sale and worth a look. Prices climb quickly as trim levels step up, so our pick would be a mid-range S trim that comes packed with comfort and safety features.

The Toyota CH-R is attractive from a price and options standpoint but falls short in usable space and doesn’t offer an all-wheel-drive option. We’d steer clear of it for those reasons alone. The RAV4 is all-new for 2019 and has a long list of standard features, even in its most basic form. The price tag grows fast as trim levels and options boxes are ticked, but the latest version of Toyota’s long-running compact crossover is one of the best in the segment.