SAN FRANCISCO, Calif., Nov. 19, 2021 -- Rivian’s IPO and the first deliveries of its R1T pickup may have been hogging the spotlight in recent weeks, but there’s fresh evidence that it’s Ford’s all-electric F-150 Lightning that will really shake up the auto industry when it launches next year.

That’s according to the latest survey by Autolist.com, which found widespread consumer interest in the F-150 Lightning over all other upcoming all-electric trucks.

“The Lightning has all the ingredients of a successful launch,” said Corey Lydstone, president and CEO of Autolist.com. “It has the name recognition that transcends the EV marketplace, it has the styling and features that appeal to truck owners and first-time buyers alike, and its wide price range makes it attainable but also aspirational.”

“Crucially, the F-150 Lightning is the first large-scale, all-electric truck to be launched in the U.S.,” Lydstone added. “Given Americans’ appetite for all things truck-related, that’s Ford’s ace in the hole.” 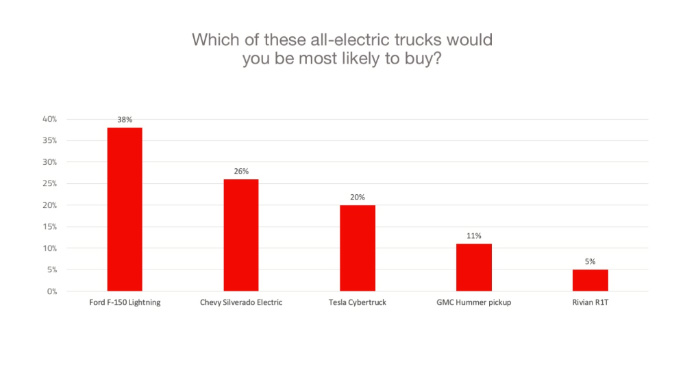 Ford’s F-150 Lightning was the most popular choice across all respondents, with 38 percent of shoppers saying it would be their top pick among all-electric trucks. Chevy’s upcoming electric Silverado was second, with 26 percent of the vote, followed by Tesla’s Cybertruck, with 20 percent, GMC’s Hummer EV SUT with 11 percent, and Rivian’s R1T with five percent.

Autolist surveyed just over 1,100 current car shoppers in late October and early November to gauge their interest in and awareness of the all-electric pickup truck segment. 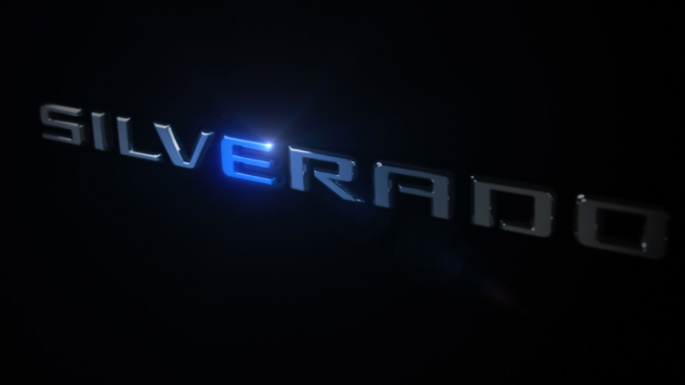 Choices of trucks were limited to those that are currently available for pre-order or which have been announced as being a specific model with a debut date (Chevrolet’s all-electric Silverado -- teased above -- is set to debut on Jan. 5 2022 at CES in Las Vegas).

Not only was Ford’s Lightning the most popular pick, but it also won over key groups of shoppers who will be crucial to the success of it and any other electric pickup.

The Ford was also the top choice among first-time EV buyers and existing or previous EV owners, first-time and existing/previous truck owners, nearly all of the age groups polled, and across all household income levels.

Here’s a look at how Ford and its competitors faired across specific groups of shoppers:

Ford’s Lightning made significant gains among people who own now or have previously owned any type of electric vehicle. 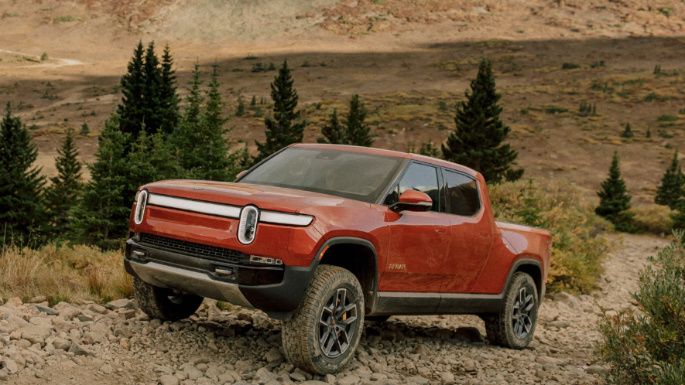 In the 2019 survey, the Rivian R1T (seen above) was the top-ranked electric truck among EV owners: (32 percent chose it as their top pick). Tesla’s Cybertruck was second with 27 percent, and Ford’s F-150 rounded out the top three with 23 percent.

At the time, Ford had said it would be building an all-electric version of the 14th-generation F-150 but it hadn’t announced the ‘Lightning’ name or release photos or specifications.

“This 2019 result made sense,” Lydstone said. “It stands to reason that people familiar with EVs would be more inclined to favor the brands that are challenging the status quo and promising groundbreaking all-electric vehicles.”

Yet Ford flipped that expectation on its head in this 2021 survey.

This time around, Ford’s F-150 Lightning was the most popular electric truck among people who have or currently own an EV: 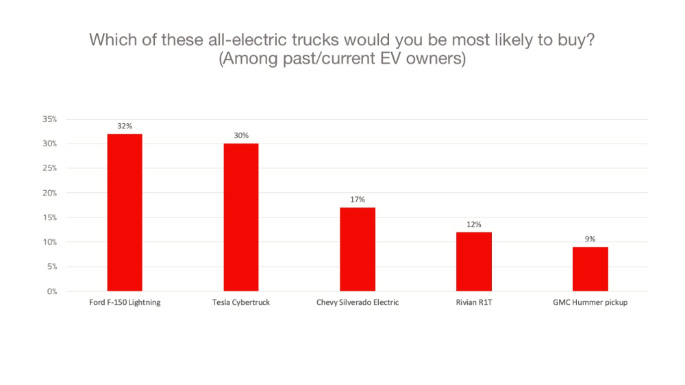 But the Ford was also the most popular choice among people who had not owned an EV before:

“This is just more evidence that Ford’s F-150 Lightning will be the electric truck to beat when it comes to market in 2022,” Lydstone said. “Being able to appeal to both experienced EV shoppers and newcomers to electric power will be critical.”

Given the historic loyalty of truck buyers in the auto industry, for an electric pickup to be a sales success, it will need to appeal to traditional, existing truck owners.

Nearly two-thirds (64 percent) of respondents in Autolist’s survey said they currently own or have previously owned a pickup truck before:

The spread was a little more even among people who had never owned a truck but still landed in Ford’s favor: 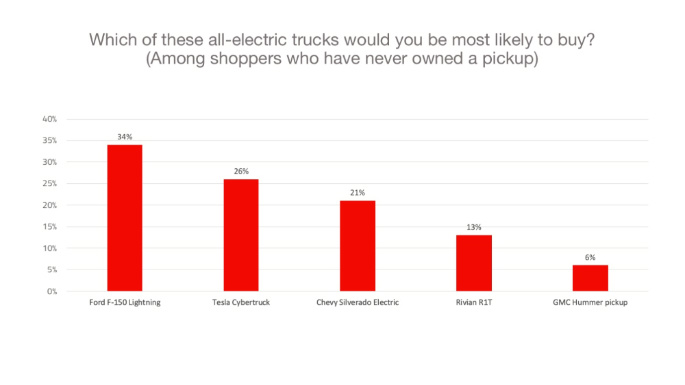 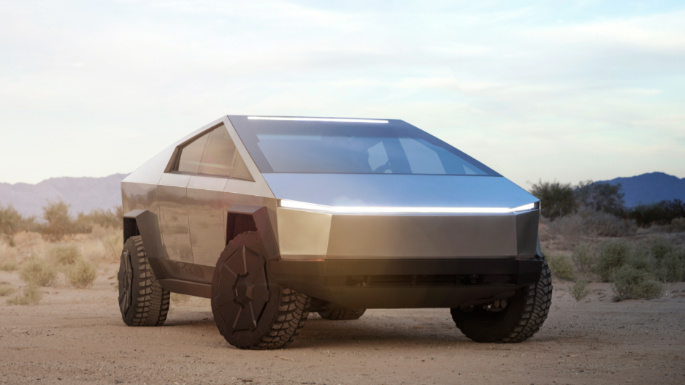 Setting aside the Ford conversation, Autolist’s survey also found a key consistency between electric truck shoppers and EV shoppers in general: their concerns about going electric.

Respondents were asked to name the biggest reason they would not choose an electric truck over a non-electric model. The top three answers may sound familiar: Cost, Range, and Access to Charging Infrastructure.

That’s because these have been the top three concerns among respondents in two earlier Autolist studies done in 2019 and 2021; studies that focused on electric vehicles in general.

Here’s a look at the ranking of reasons people would not choose an electric truck, according to Autolist’s survey: 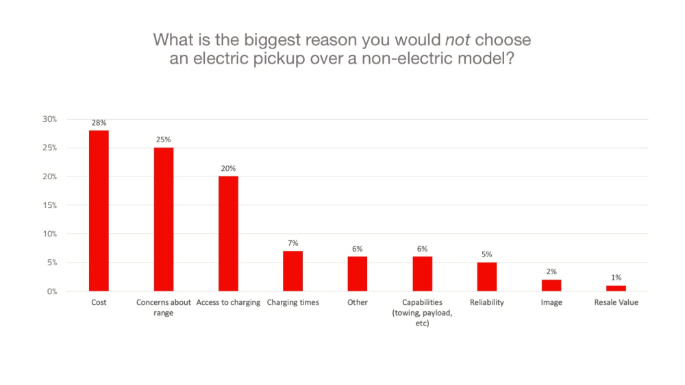 “Our latest survey makes clear that EV concerns are EV concerns, no matter the body style,” Lydstone said. “It’s also why Ford’s Lightning scored so well, since it generally addresses these concerns better than the others.”

Perhaps the hottest model in the electric truck world (and indeed the only one that has begun deliveries to customers) is Rivian’s R1T.

The all-electric pickup promises an EPA-rated 314 miles of all-electric range and a starting price of just under $68,000 before any tax incentives or rebates. It will soon be joined by its SUV counterpart -- dubbed the R1S -- which is due by the end of this year.

Early reviews of the R1T have been overwhelmingly positive and the company has some 55,000 pre-orders for the truck. Rivian itself went public on November 10 and quickly hit a market cap of over $100 billion; it counts Amazon and Ford as some of its chief backers. 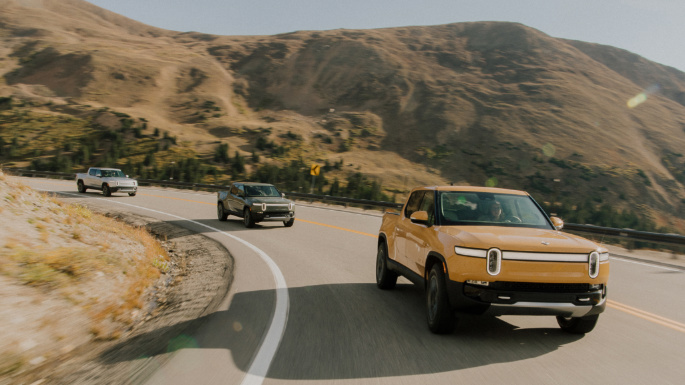 “The R1T is a compelling EV and an impressive effort considering it is Rivian’s first product,” Lydstone said. “While it’s captured the attention of both investors and customers, it will take some time before the general public builds up trust in the company.”

Rivian also appears to have suffered from some competition from the Ford F-150 Lightning since Autolist’s last electric trucks survey in 2019.

In that iteration of the survey, Rivian’s R1T ranked third, with 24 percent of consumers choosing it as their top pick for an all-electric truck; it was just behind second-place Ford, which garnered 26 percent of the vote.

This sets up a potentially uncomfortable scenario considering Ford’s $1.2 billion investment in Rivian several years ago (which was worth roughly $12 billion at the time of this writing).

“Rivian has more to fear from Ford than it does from Tesla, given how the Lightning is more of a competitive threat than the Cybertruck will be if it ever reaches production,” Lydstone said. “It will be interesting to see how the R1T and Lightning coexist.”

Kids and Their Teslas:

Autolist’s survey also looked at what impact a respondents’ age may have on which all-electric truck they’d be interested in.

The survey found that the younger a respondent was, the more likely they were to choose Tesla’s Cybertruck. As they got older, Ford’s F-150 Lightning became the top pick. 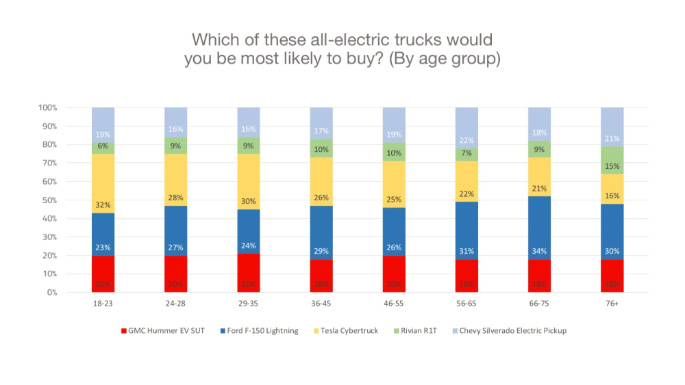 Tesla was the most popular choice for all respondents 35 years old and under. This was spread across three cohorts of ages: 18 to 23 years old, 24 to 28 years old, and those 29 to 35 years old.

The rest of the age groups belonged to Ford, with the F-150 Lightning being the most popular model across all other age groups.