Full Story:
The range of an electric vehicle has become a holy grail for car shoppers, as their priorities for choosing an EV have shifted rapidly in just two years, a recent survey by Autolist.com has found.

Range leapfrogged Price and Charging Infrastructure to become consumers’ most important element in choosing an EV since Autolist’s last poll on the subject in 2019.

The latest survey also explored how important home charging is to people considering EVs, what really makes Teslas appealing, and how long people would be willing to wait for recharging during road trips.

“Two years is a long time in the world of electric vehicles, and buyers today have more models to choose from and more places to plug them in,” said David Undercoffler, editor-in-chief of Autolist.com. “That’s helped ease concerns about price and charging while pushing range to the top of their list.”

Autolist’s 2021 Electric Vehicle Survey polled 1,800 current car shoppers in April 2021. The results were compared to responses from a similar survey done in August 2019.

Electric Priorities
Consumers in the 2021 survey were asked to pick their top three biggest purchase considerations for an EV. Here’s a breakdown of what percentage of respondents chose each EV priority: 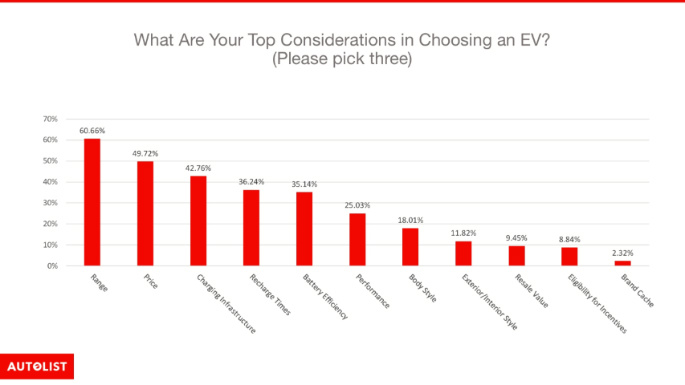 These results are notable for how they compare to Autolist’s EV survey from 2019. In that survey, the top five responses were as follows:

The Price is Right
Shoppers’ reduced concerns about EV prices are likely from two factors.

For one, battery technology has continued to get cheaper. In 2019, the average cost per kWh was about $157. By 2020, that had dropped to $140, according to Bloomberg. By 2023, it’s estimated that battery packs will average $101 per kWh, making battery electric vehicles as cost-effective and profitable as their gas counterparts.

While most consumers aren’t keeping close tabs on these trends, they are helping to erode the perception that EVs have to cost more.

Secondly, consumers in 2021 are faced with an ever-growing number of EVs to choose from. These include the Tesla Model Y, Volkswagen ID4, Ford Mustang Mach-E, and the Volvo XC-40 Recharge.

While these newcomers aren’t necessarily cheaper than what was available in 2019, the new additions are closer to well-known gas models in terms of size, vehicle type, execution, and perceived value than earlier electric cars were.

“Car buyers are less price-sensitive about EVs when the models you’re showing them look like the gas vehicles they already know,” said Undercoffler. “So a Ford Mach-E feels more value-oriented today because it looks like many other non-electric crossovers in the $40,000 - $50,000 range.”

“Consumers had a harder time making that math work several years ago when the only non-luxury EVs they saw were small hatchbacks that cost $40,000 before incentives,” he added.

What Charging Infrastructure?
Interest in charging infrastructure, in the meantime, held steady between the two surveys, ranking as a top-three priority in both the 2019 and the 2021 iterations.

It’s worth noting that in the years between the survey results, the number of public charging units has grown to 114,000 from 68,800, a 65 percent increase. The number of EV charging stations in that time has more than doubled, to nearly 48,000 from just over 20,000, according to the Department of Energy.

So why would a huge increase in public charging not cut down on consumers’ anxiety about charging?

Because they want to charge at home.

There’s No Charge Like Home
Autolist’s survey asked respondents how important to their purchase consideration was the ability to charge an EV at home. The results were conclusive: 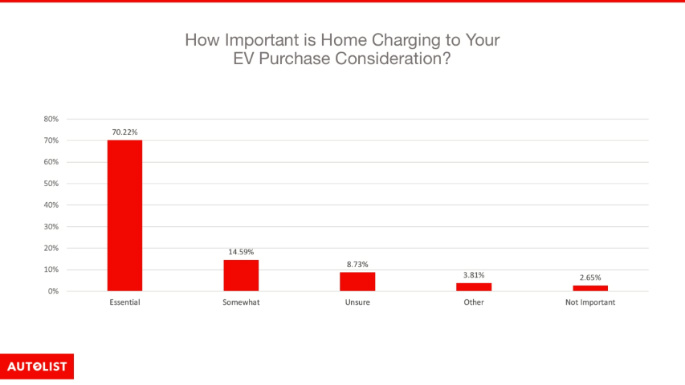 “Of course, adding more public chargers is a good thing,” Undercoffler said. “And yet that’s just not the use case most consumers imagine when they consider switching to electric -- they want to plug in at home.”

The Supercharged Elephant in the Room
The importance of home charging to consumers was also reflected in their outlook on what makes Tesla EVs so appealing.

When Autolist asked survey respondents to pick the three most appealing aspects of Teslas, only a quarter of shoppers that Autolist polled cited the automaker’s proprietary Supercharging network of charging stations (ranking it fifth out of 11 possible answers): 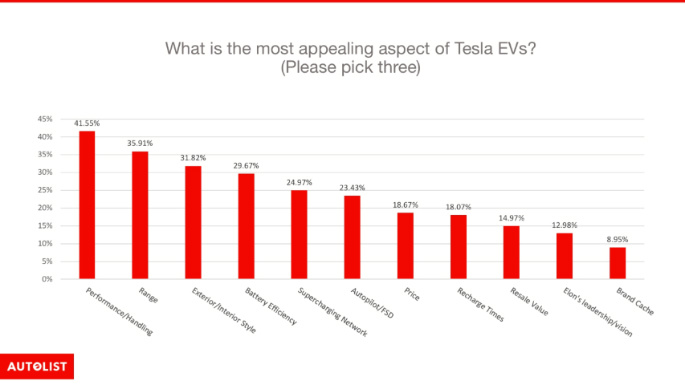 “This ranking is also noteworthy because it erodes the notion that Tesla’s Supercharging network is the critical competitive moat that other brands can’t cross,” Undercoffler said. “It shows there are many other ways mainstream automakers are being outclassed by Tesla.”

On the Road
Autolist’s survey also found that charging infrastructure has likely remained a stress point because it can’t yet match consumers’ expectations for charging times.

The survey asked respondents how long they would be willing to wait at a stop on a road trip to add 300 miles of driving range back to their EV: 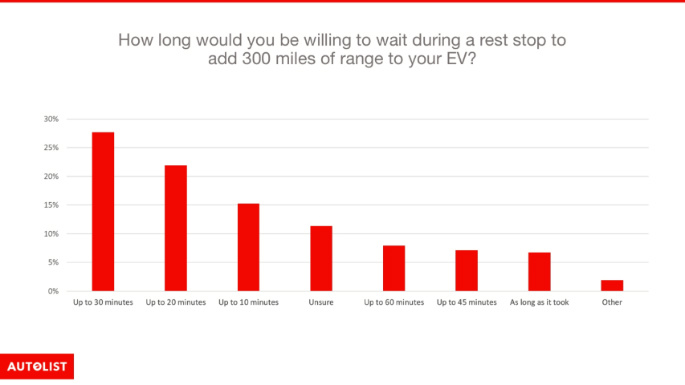 As the chart indicates, the most popular answer was ‘Up to 30 Minutes.’

Adding that much charge today would require using the latest DC fast-charging infrastructure that’s currently available in very few stations nationwide -- and an EV that had the capability to handle that kind of juice for half an hour.