Inventory shortages have been slamming the new and used car markets for months, thanks to a perfect storm of chip shortages for new vehicles, low interest rates, pent-up demand, and a volatile rental car market.

But how is that affecting consumers’ attitudes and reactions to the car-shopping experience amidst all this turmoil? To find out, Autolist.com surveyed more than 1,500 current car shoppers in August 2021.

The results showed widespread frustration with low inventory levels and higher-than-expected prices. They also showed how consumers are responding, whether that’s changing the timing of their purchase, opting for a different vehicle type or brand than they initially were considering, or spending more than they originally budgeted for.

“The past 18 months have been a rollercoaster ride for consumers trying to navigate the new and used-car markets,” said Corey Lydstone, president and CEO of Autolist.com. “This survey really digs into just how these historically low inventory levels are affecting what, where, and when people are buying their next car.”

Here’s a look at the key takeaways from Autolist’s latest study.

Frustrating and pessimism were common themes among respondents

51 percent of people said they found ‘less’ or ‘significantly less’ inventory than they expected. 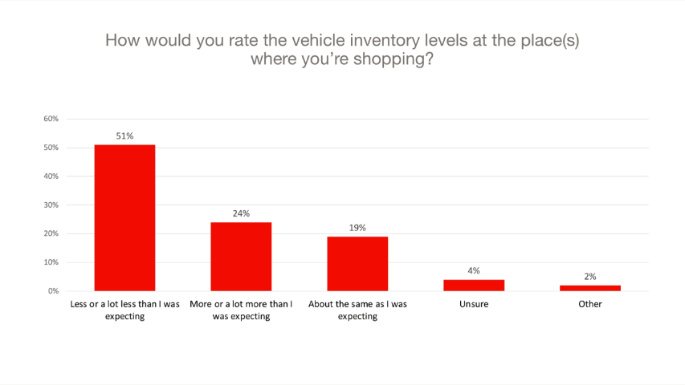 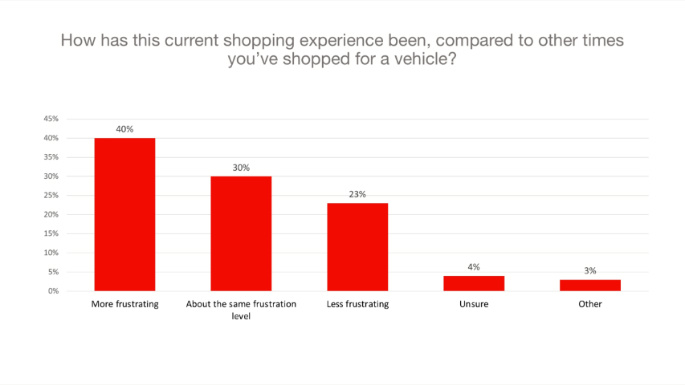 These experiences back up the data on current car inventories tracked by Autolist’s parent company, CarGurus. New vehicle inventories in August are on track to dip another 13.5 percent from their already-basement-level numbers in July -- putting them down 64 percent year-over-year.

Meanwhile, used inventories in August gave up some of their recent (but small) gains, dipping 4.5 percent from July but rising above August 2020 numbers (YoY) by 6 percent.

So how are consumers responding?

How consumers changed what they were shopping for:

Consumers are compromising on their vehicle choice due to inventory shortages.

Yet safety features were the one component of their next vehicle where consumers were least willing to compromise: 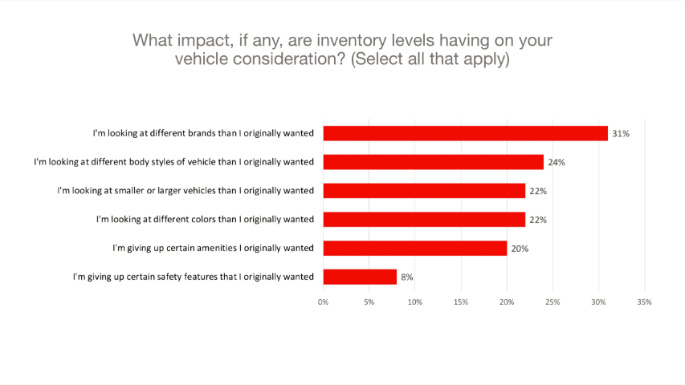 How consumers changed where they’re looking for their next vehicle:

The inventory crunch has changed this too. 58 percent of respondents said that changed where they shopped this time around, in order to find the vehicle that they wanted. 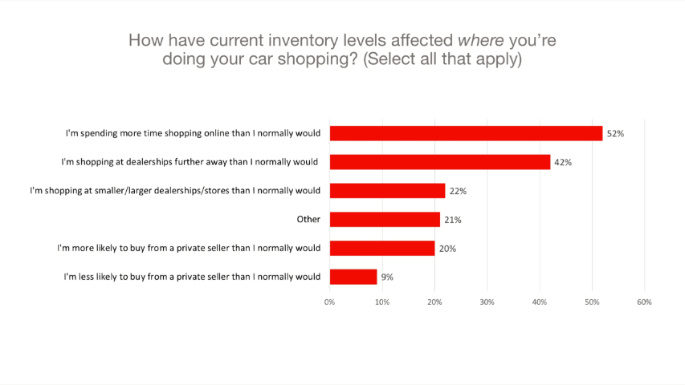 The biggest behavior changes were:

How consumers changed when they’re getting their next vehicle:

“With new and used vehicle inventory -- and prices -- fluctuating each month, it’s understandable that shoppers might change their timing,” Lydstone said. “Whether it’s to delay getting a new car to see if prices come down, or get one sooner because you’re offered a great deal on your trade.”

Here’s a look at the impact of inventory levels on people’s timing for their next vehicle: 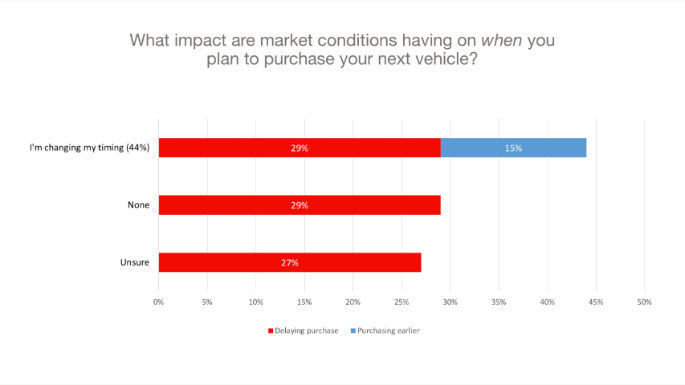 Autolist’s survey also found noteworthy trends among specific groups of respondents, including new vs used vs certified pre-owned (CPO) shoppers, age group, intended vehicle type, whether they were shopping more out of want or need, and whether or not they found this round of car-shopping to be a frustrating experience.

New-vehicle shoppers are significantly more likely to consider different brands, different sized vehicles, and different vehicle body styles than used. Yet new buyers were the least likely to give up certain amenities that they had initially wanted. 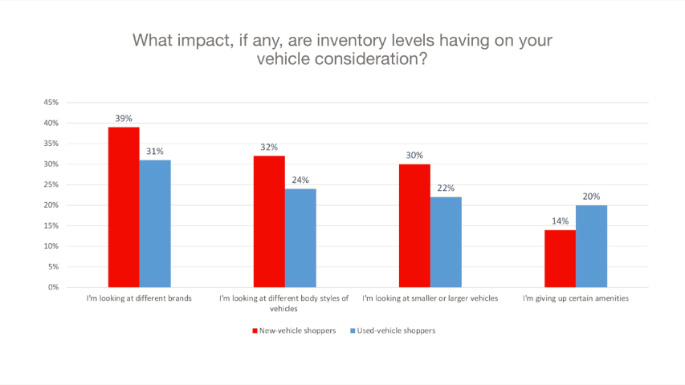 Who’s the most loyal?

Traditionally, truck buyers are the most loyal in the auto industry, with more owners trading in their old truck for a new one from the same brand than any other vehicle segment.

Autolist’s study found that this remains the case, despite inventory challenges. Just 24 percent of full-size truck shoppers in this survey said they were considering a different brand as a result of poor inventory, the lowest of any major segment.

On the other end of the spectrum were shoppers looking at small sedans; this was the segment whose shoppers were most likely to consider different brands from what they initially intended, at 46 percent.

“It’s amazing how not even a historic shortage of vehicles can dampen the loyalty of truck buyers,” Lydstone said. “Meanwhile, on the other side of the coin are small-car shoppers, many of whom are need-based consumers so their loyalty is much more fleeting.”

These figures compare to the overall average of 31 percent of respondents saying they’re looking at different brands. Here’s a look at how shoppers in all segments responded: 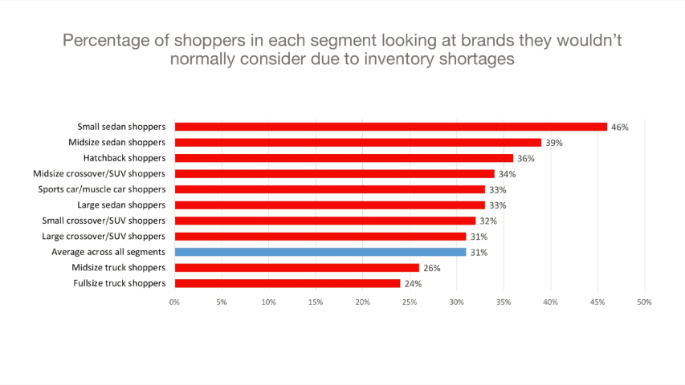 Price-conscious Used shoppers feeling the squeeze the most:

Shoppers looking for new vehicles were significantly more likely to say they believed it’s currently a good time to get a vehicle, compared to those looking for used or CPO vehicles

'I believe it’s a good time to get a vehicle:'

The higher level of frustration by used-car shoppers is due to two related factors.

While it’s true that used vehicle inventories aren’t as slim as new vehicles, cheaper used vehicles (those that are under $20,000) have become much harder to find.

Yet Autolist’s survey found that used shoppers are looking primarily for vehicles under $20,000:

“This means that the biggest group of used-car shoppers has seen the biggest drop in available inventory,” Lydstone said. “Thus, used shoppers on a tighter budget really don’t feel like now is a great time to be buying a vehicle.”