Full Story:
Ford’s F-150 Lightning is showing it has staying power, with the full-size pickup again ranking as the top choice for electric trucks in Autolist.com’s annual EV Truck Survey. But new competition in the market means Ford’s lead is narrowing.

As in the 2021 iteration of the survey, consumers in 2022 favored the F-150 Lightning over all other electric trucks currently on the market or expected soon, with 24% of respondents naming it their top pick. Toyota’s Tacoma EV ranked second; Tesla’s Cybertruck, the Chevy Silverado EV, and Ram’s 1500 Revolution rounded out the top five. GMC’s Hummer and Sierra EV trucks and Rivian’s R1T were also included. 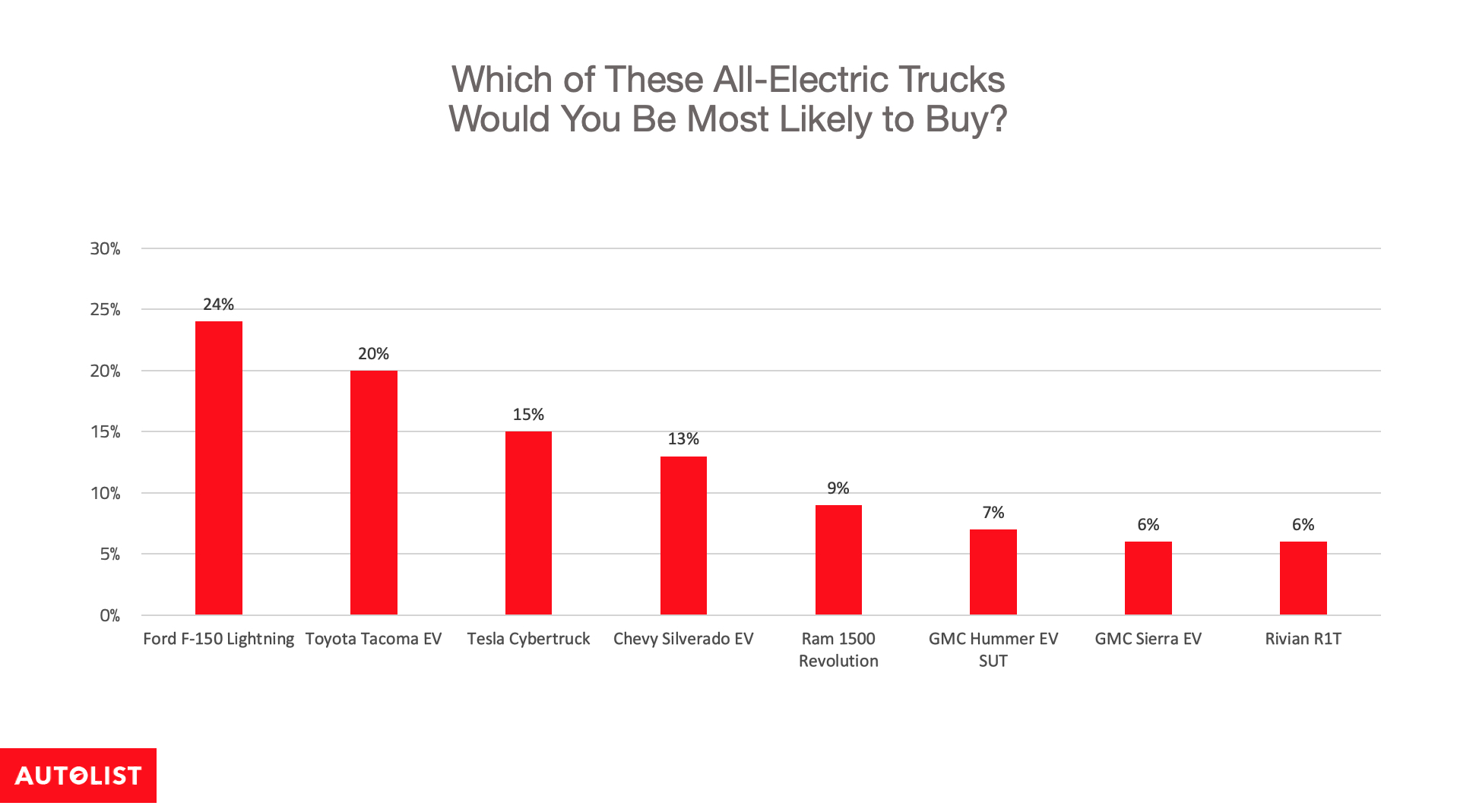 “The F-150 Lightning continues to outperform rivals in our survey thanks to its jack-of-all-trades approach,” said Corey Lydstone, president and CEO of Autolist.com, a CarGurus company. “Truck owners prefer it, EV owners and newcomers alike prefer it, and most age groups prefer it. Those are crucial groups of potential buyers, and of course, being first-to-market doesn’t hurt it either.”

Autolist surveyed 1,175 current car shoppers in October and November to gauge their attitudes toward the electric pickup truck market. The 2022 EV Truck Survey follows similar studies Autolist conducted in 2021 and 2019.

Models included in this latest survey were the Lightning, Toyota’s Tacoma EV that’s widely expected during the model’s next generation of production, Tesla’s much-delayed Cybertruck, Chevy’s Silverado EV that’s due on the road in late 2023, its fellow GM platform-mates the GMC Hummer SUT and the GMC

Sierra EV, Ram’s 1500 Revolution that’s now slated to debut at the 2023 CES in January, and Rivian’s much-lauded R1T. Currently, only the Ford, Rivian, and Hummer models are in customers’ hands.

This latest Autolist survey found that the F-150 Lightning garnered 24% of consumer votes for their top pick. The Toyota Tacoma EV grabbed 20% of the vote, Tesla’s Cybertruck ranked third with 15%, Chevy Silverado EV was fourth with 13%, Ram’s 1500 Revolution ranked fifth with 9%, GMC’s Hummer EV SUT was sixth with 7%, and the GMC Sierra tied for seventh with the Rivian R1T as both grabbed 6% of the vote.

But the F-150 Lightning wasn’t just the most popular overall; it also ranked well among core groups of shoppers that will be essential to the success of any EV, truck or not. Here’s a look at those groups. 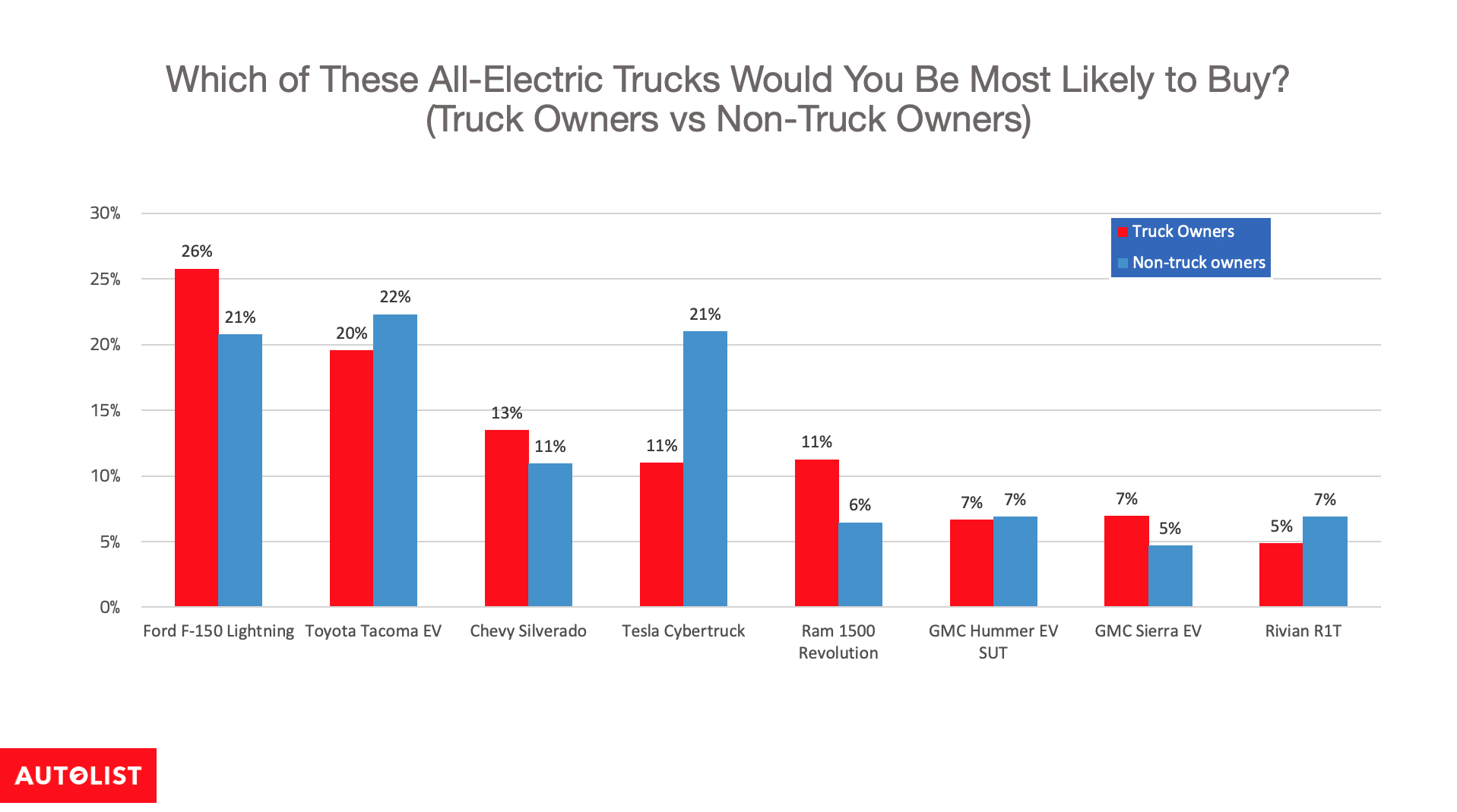 Key among the questions Autolist’s survey asked was whether respondents had previously owned a truck.

“Trucks have always been a cornerstone of the US auto market, and truck buyers are among the most brand-loyal in the industry,” said Lydstone. “So we wanted to make sure our survey got to the heart of how electric trucks will fit into that picture.”

60% of shoppers said they either currently own a truck or have previously owned one.

Of note, Toyota’s Tacoma EV was the top-ranked model among non-truck owners, with the Lightning and Cybertruck rounding out the top three slots. Non-truck owners were also nearly twice as likely to pick the Cybertruck than truck owners, indicating significant crossover appeal for the Tesla and reinforcing the expectation that it wouldn’t cannibalize sales of more traditional trucks, EV or not.

Meanwhile, the Lightning was the clear winner among truck owners, with the Tacoma and the Silverado also in the top three.

Non-truck owners were also more likely than truck owners to consider an electric truck as their next vehicle. 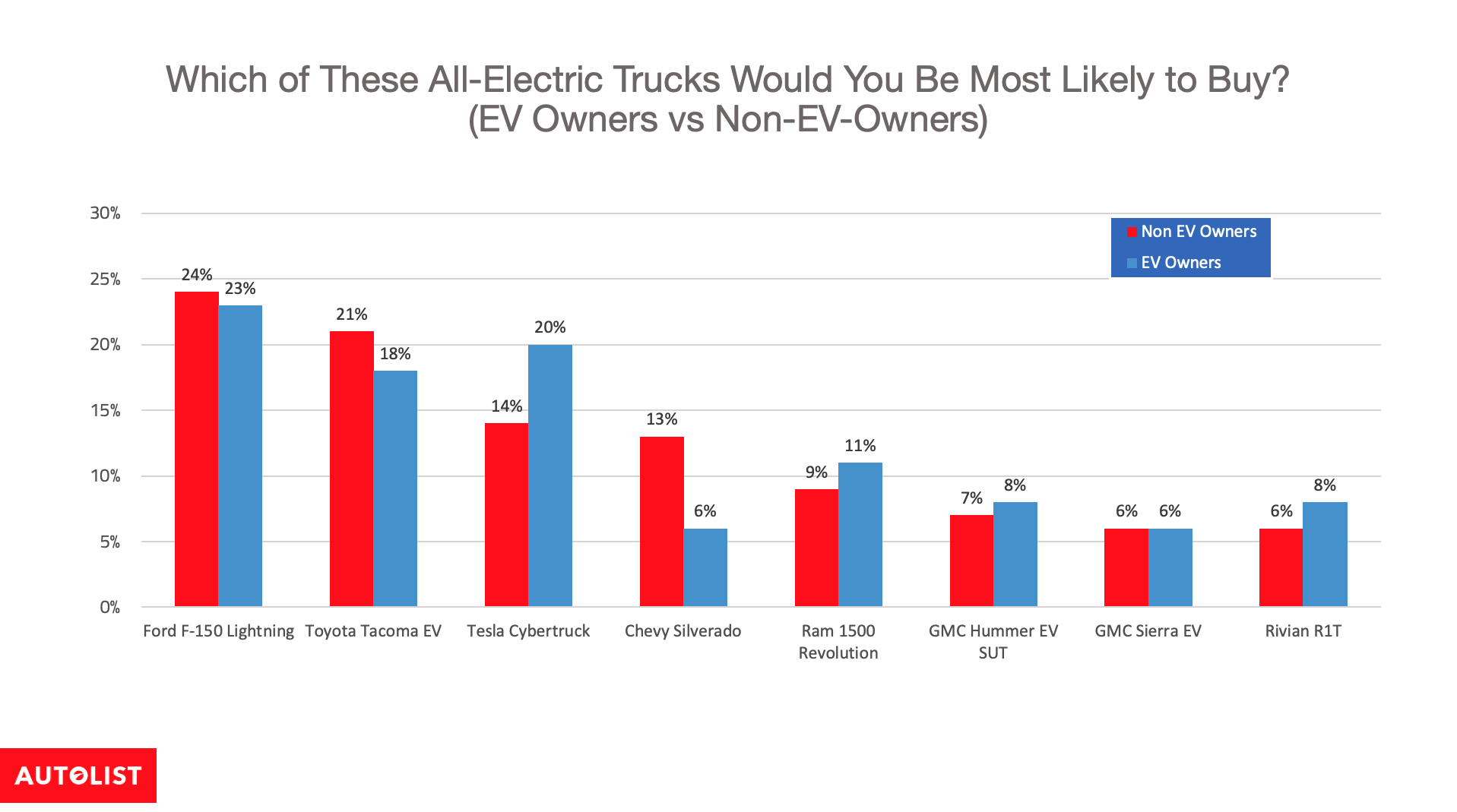 Autolist’s survey also dove into what impact current or previous EV ownership might have on which EV truck they prefer.

As the data point out, both Ford and Tesla rank well with people who have previously owned EVs. This makes sense considering both brands are known entities in the EV space; Ford has had considerable success with its Mustang Mach E, and Tesla is, well, Tesla.

Toyota ranking third also lines up with that brand’s image as a green leader in the auto industry, despite only selling a pure EV for several months of 2022 — a phenomenon that Autolist has observed in numerous earlier surveys about brands and their eco-friendly reputation.

But what was a bit of a surprise was how poorly EV owners reacted to Chevy’s Silverado EV. These folks were less than half as likely to choose Chevy’s forthcoming truck than people who had not owned an EV.

“We were expecting that Chevy’s considerable experience with the Bolt and the Volt models would translate into excitement by EV owners for the Silverado,” Lydstone said. “But in fact, it had the opposite effect; it was again Ford’s Lightning that attracted their attention the most often.” 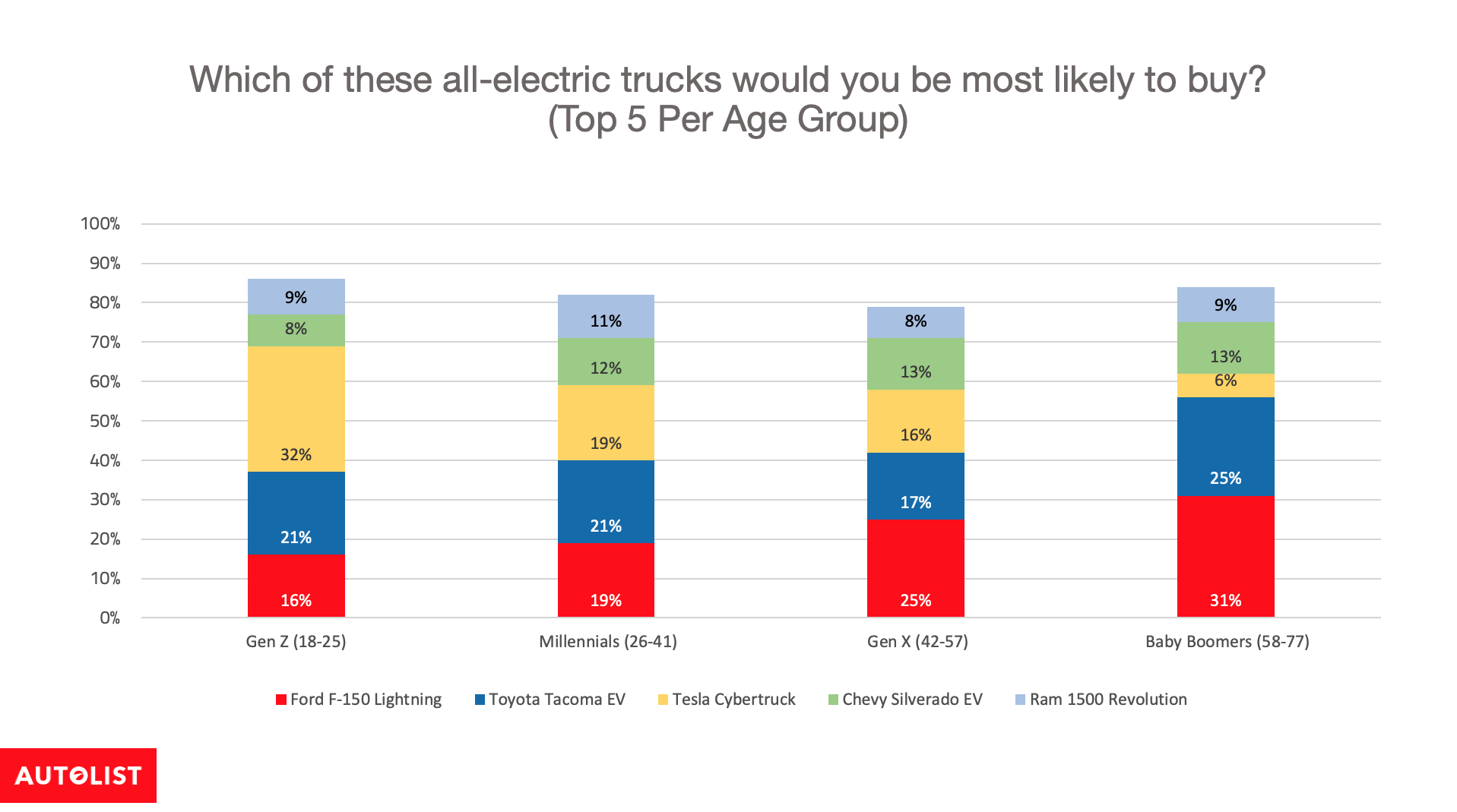 Autolist’s survey also explored which electric trucks were most popular among various age groups: Gen Z, Millennials, Gen X, and Boomers. The results were clear: the older you are, the less interest you have in Cybertruck.

Tesla’s forthcoming model was a hit with Gen Z shoppers, with 32% choosing it as their top pick. It then ranked lower and lower with each successive age group, with just 6% of Baby Boomers putting it atop their list.

Ford’s Lightning and Toyota’s Tacoma EV, meanwhile, were consistent winners across all age groups, ranking in the top two spots for all age groups save for Gen Z.

“This is another key reason for the overall popularity in our survey for both the Ford and Toyota models,” Lydstone said. “It will be essential to the success of these electric trucks that they appeal to shoppers of all age groups, and these two trucks nail it on that front.” 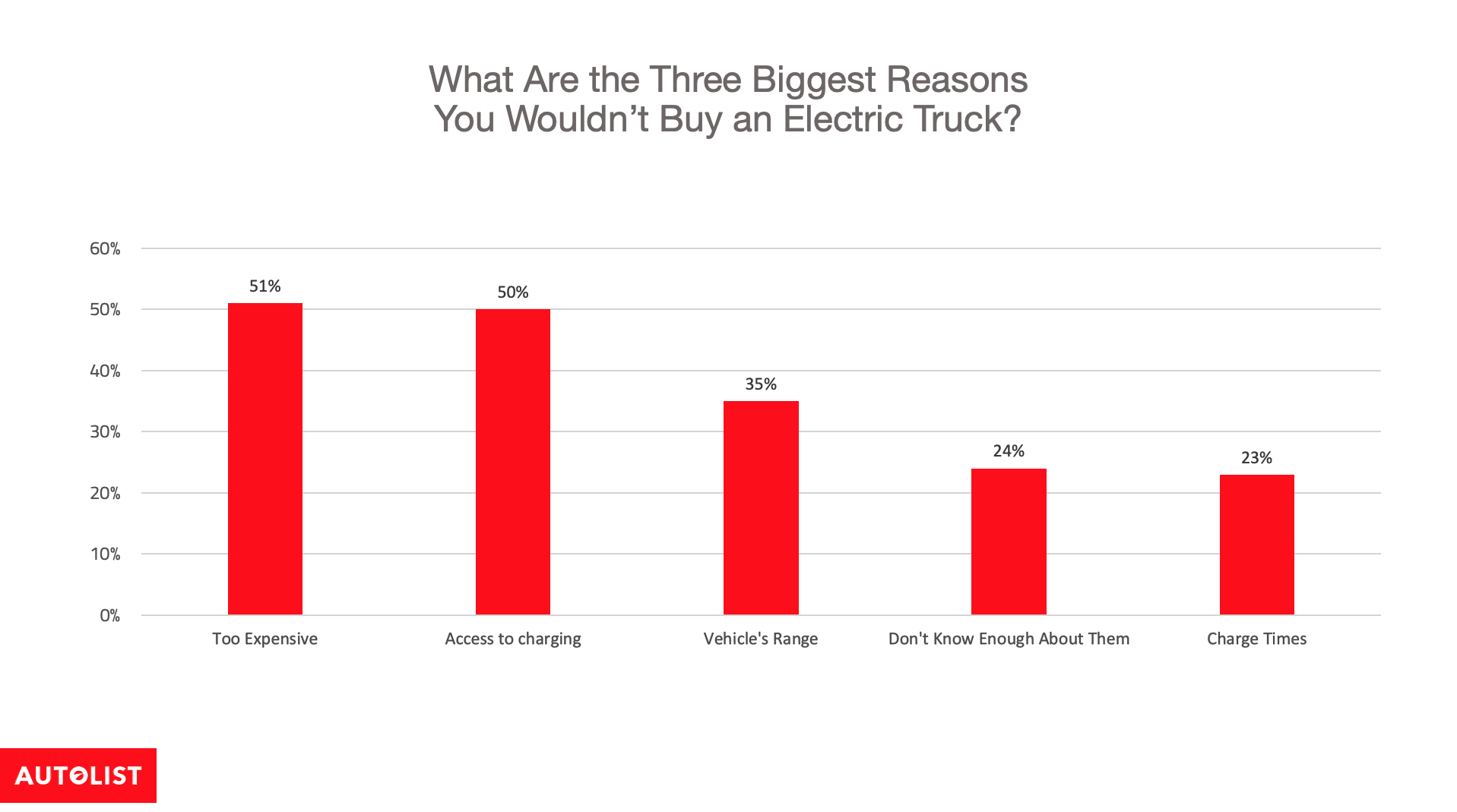 Much of this has to do with the prices automakers mention when launching or introducing their electric trucks. First-edition models of the Chevy, Hummer SUT, and GMC Sierra electric models sticker for over $100,000.

Ford has bumped up the base price of its Lightning models twice in recent months to $52,000 and is a long time away from actually building and delivering models at that price point — current versions of the truck are available for between $72,000 and over $100,000. Meanwhile, Rivian’s R1T starts at $73,000.

“Worries about electric truck prices make total sense to us,” Lydstone said. “When you hear about or read about these new models, it’s usually in the context of their six-figure price tags; this does little to convince people that electric trucks are a viable option for the near future.”