Full Story:
Too expensive, not enough range, no place to charge them — these are the three top reasons Americans are avoiding electric vehicles, according to the latest survey from Autolist.com.

Autolist’s annual Electric Vehicle Survey polled nearly 2,000 consumers in April through June 2022 to gauge their interest in and opinions on all things EVs. The results reveal that anxieties about electric vehicles haven’t changed much since Autolist first began the poll in 2019, despite many new — and cheaper — EVs hitting the market since then.

What’s more, not even historically high gas prices in recent months have been enough to tip shoppers into considering an EV, Autolist found.

“Even though we’re seeing record high prices for new and used gas cars right now, many consumers still don’t see EVs as a completely viable alternative yet,” said Corey Lydstone, founder and CEO of Autolist, a CarGurus company. “But there are some encouraging signs that this could be set to change in the near future.”

The most common answers were as follows: 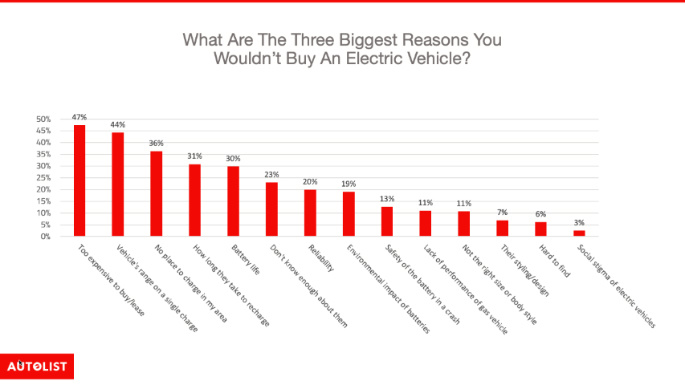 “These are the same top three concerns that we saw in 2019 and again in 2021,” said Lydstone. “While sales of EVs are slowly improving as more compelling models hit the market, consumers’ impressions of electric vehicles aren’t improving.”

What’s more, Autolist’s survey actually found that even more people were concerned about EVs’ prices in 2022 than were worried about them in 2019.

Those earlier, pre-pandemic poll results showed 42 percent of consumers said pricing was a key hurdle (versus 48 percent in 2022), making pricing the second biggest concern in the 2019 poll; an EV’s range was the top concern then.

The news gets worse when you look at a key cost in any EV: its batteries.

After years of battery prices declining — thus pulling down the cost of electric vehicles — those prices have started rising again. Many industry analysts are expecting them to continue to increase for the next several years as global demand for the raw materials to make batteries for all types of uses has surged.

“Then you add to that international sanctions against Russia, supply chain disruptions, inflation, and investor speculation, and you have the perfect recipe for the price of batteries — and the EVs they’re powering — to keep increasing for the foreseeable future,” Lydstone said.

These increased costs for the makers of EVs are already being passed down to consumers as automakers scramble to keep their EVs profitable — a tough challenge even before battery supply tightened up.

Autolist also found that many consumers were unwilling to pay a premium for an electric vehicle versus its gas equivalent.

When asked how much more they would be willing to spend on a vehicle for it to be electric or for a similar electric version to a gas model they were considering, 28 percent of people said they wouldn’t spend any extra money. 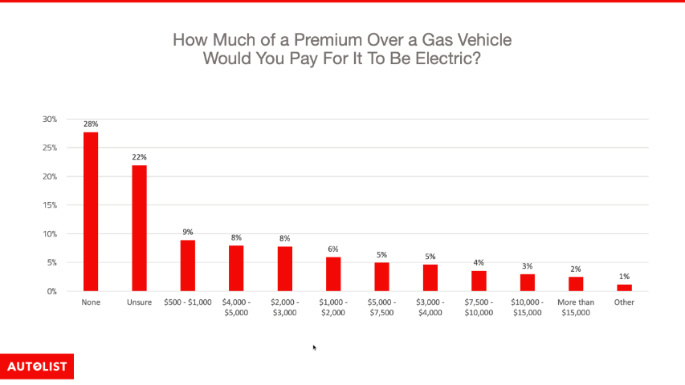 It's Not About the Gas

Autolist’s survey asked people what price a gallon of gas would have to hit in order for them to seriously consider an EV for their next vehicle. 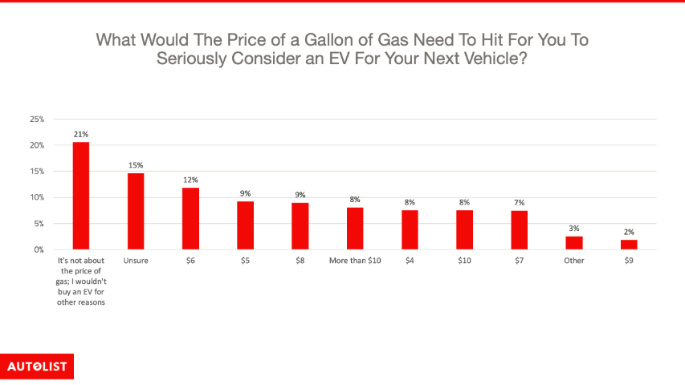 The most common answer — with 21 percent of respondents choosing it — was “It’s not about the price of gas; I wouldn’t buy an EV for other reasons.”

Another 15 percent said they were unsure.

Autolist’s poll found significant support for government incentives at the federal, state, and local level to help boost EV adoption and offset some of their higher costs. 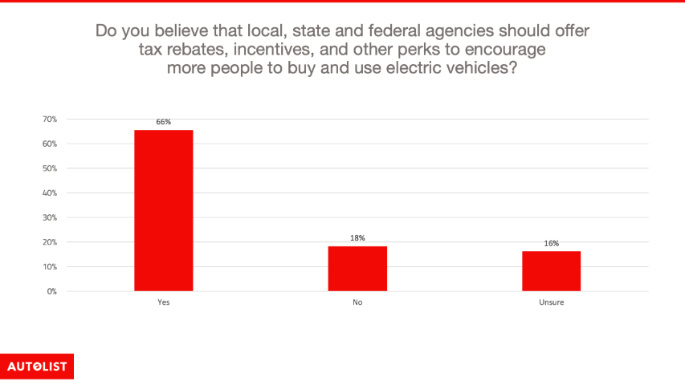 Shoppers’ views were more mixed when it came to the current cap the federal government puts on the number of EVs from a single manufacturer that are eligible for a tax rebate (currently set at 200,000). Automakers like Tesla, GM, and most recently Toyota have this limit, making their EVs and PHEVs ineligible for federal rebates.

42 percent of shoppers were against the cap; the final 34 percent were unsure.

Those federal rebates can have a significant impact on what consumers pay out of pocket for an EV. 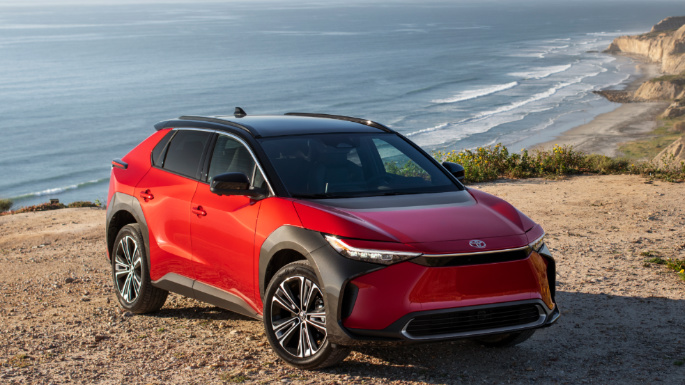 Toyota’s new bZ4X (above) and the Subaru Solterra (below) are a clear example of this. While they’re largely the same vehicle, the AWD Solterra comes in roughly $6,500 cheaper than the AWD Toyota if one factors in the full $7,500 federal rebate that the Subaru is eligible for but which the Toyota isn’t.

“That’s a huge price delta that could easily tip someone into the Subaru but not the Toyota,” Lydstone said. “It could be the difference between someone going electric and someone sticking with a cheaper gas model.” 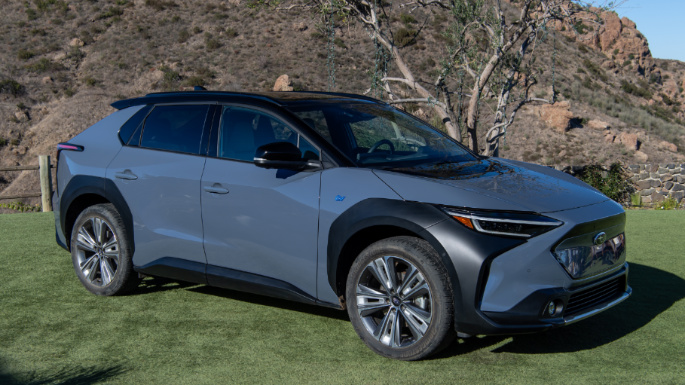 So What's the Good News for EV Fans?

But notably, pickup trucks jumped up to the second-most popular body style for an EV in 2022, with 16 percent choosing them; in 2019, pickups ranked fourth with 13 percent of respondents’ vote. 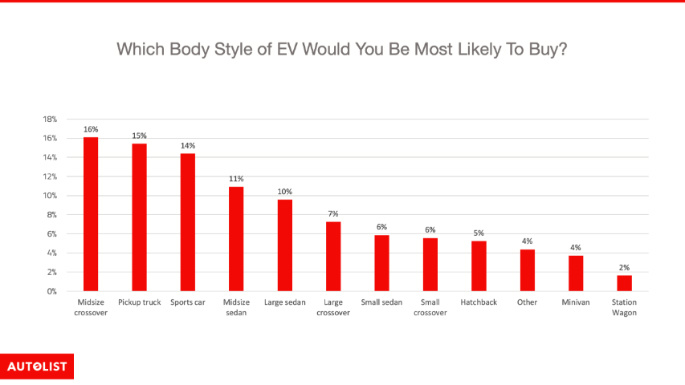 In that time, electric trucks went from a “what-if” to a reality in the marketplace. With the Ford F-150 Lightning just around the corner, plus the release of the Rivian R1T, the announcement of Chevy’s Silverado EV, Ram’s 1500 electric truck promised for 2024, and Toyota’s electric Tacoma thought to arrive in 2025, people are warming up to the idea that their next truck could be electric.

The impacts could be significant.

“The arrival of mainstream electric pickups to the marketplace could be a huge turning point for EVs in the US,” Lydstone said. “These trucks have the potential to convince a large group of buyers to go electric who otherwise may never have considered an EV.”

Autolist found some other encouraging signs for the growth of EVs in the industry.

For one, the number of respondents who actually owned an EV increased — albeit marginally. In the 2019 survey, six percent of shoppers polled said they owned an electric vehicle; by 2022, that number had increased to eight percent.

Also noteworthy in Autolist’s survey was how people said they would use an EV. 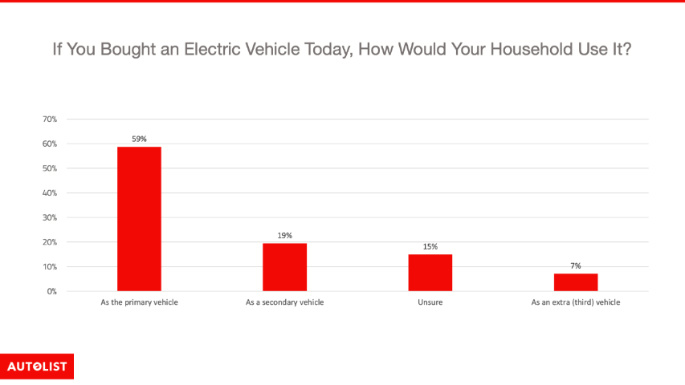 59 percent of respondents said they would use their EV as the primary vehicle in their household.

19 percent said it would be a secondary vehicle; 15 percent were unsure; seven percent said they would use it as an extra or third vehicle.

“The fact that so many people would use their EV as their main car tells us that people are into the idea of an EV in their household,” Lydstone said. “It’s just a matter of overcoming the differences people see between EVs and gas vehicles.”