Survey: Consumers Bullish on Muscle Cars’ Future, Even if it’s Not Green

The famously analog muscle car is currently at a crossroads; electrification seems inevitable, and autonomy is encroaching.

You can already see the effects. Ford today will release what’s expected to be the last gas-powered Mustang at this week’s 2022 Detroit Auto Show, Dodge has made clear its plans for an all-electric effort as early as 2024 with the Charger Daytona SRT Concept, and Chevy is rumored to be killing the gas-powered Camaro coupe and replacing it with an all-electric four-door sedan performance sedan in 2025.

So what do consumers think of the future of muscle cars? Is electrification a death knell or a saving grace? Are Gen-Z shoppers more or less bullish than Boomers? To find out, Autolist.com polled more than 1,100 current car shoppers in August and September.

“Muscle cars are woven into our cultural fabric,” said Corey Lydstone, founder and CEO of Autolist.com, a CarGurus company. “Whether you’re a diehard gearhead or you don’t even own a car, it’s likely you still at least have heard of the Mustang, Camaro, or Challenger. But this doesn’t guarantee their future success, so we thought we’d gauge consumers’ attitudes to find out.”

Here’s a look at the results. 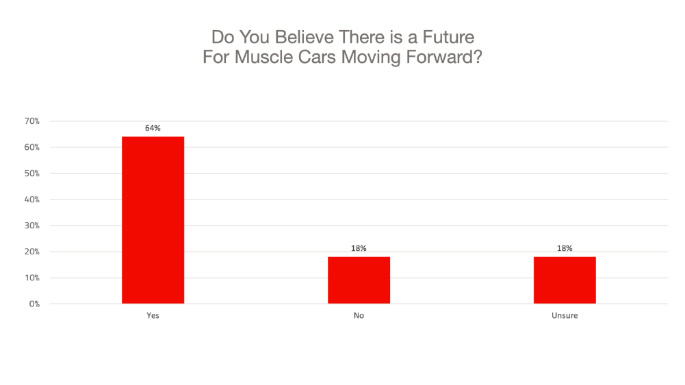 Even more promising for fans of this automotive genre was the fact that Gen Z shoppers were even more bullish on muscle cars. When the answers were split by the age of respondents, 74 percent of those polled who were between 18 and 25 years old said they saw a future for muscle cars.

As respondents’ ages increased, so too did their pessimism about the future prospects for muscle cars; 48 percent of those over 75 years old said they saw a future for muscle cars.

53 percent of consumers said they viewed these cars as either more relevant or just as relevant today as they were two decades ago; 42 percent of people said they were less relevant; five percent were unsure.

First, we asked consumers what impact a muscle car using a hybrid or plug-in hybrid powertrain would have on their impression of them moving forward?

Then we asked people what impact a muscle car using an all-electric powertrain would have on their impression of muscle cars. 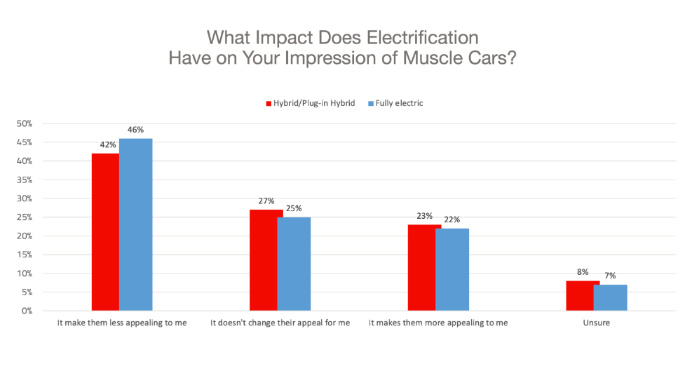 “This tells us that by a small margin, consumers are more wary of fully-electric muscle cars than they are of those that still use a gas engine of some type,” Lydstone said. “Despite the performance capabilities of EVs, people still see muscle cars as inextricably linked to internal combustion.”

By comparison, people were more open to the idea of an all-wheel-drive muscle car. 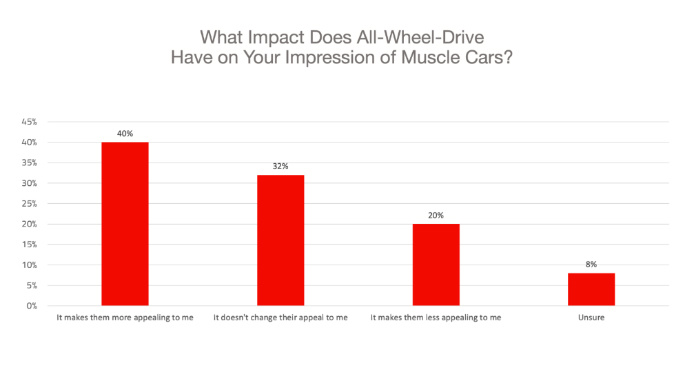 Going Green for Survival
Shoppers also weren’t sold on the idea that going green was essential to muscle cars’ survival, with less than half of respondents saying they believed electrification of any kind was necessary for muscle cars to have a future. 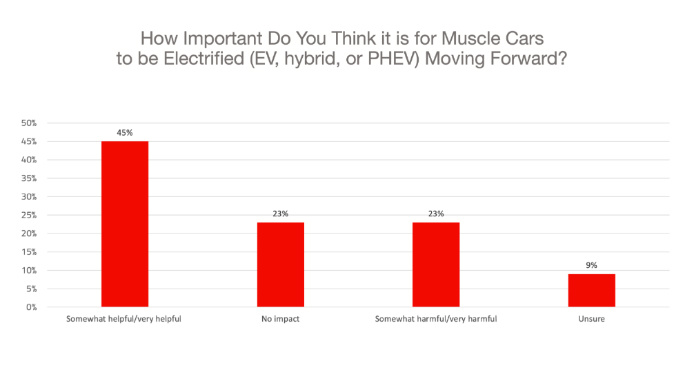 This is noteworthy because while 45 percent is a reasonable amount of respondents seeing electrification as being at least helpful for muscle cars, it lags significantly below the number of people in our survey who said they saw a future for muscle cars overall (64 percent).

What Makes a Muscle Car?
Finally, Autolist was curious about just what exactly shoppers saw as essential ingredients in actually making a muscle car a muscle car. So we asked people to pick the top three most important qualities in a muscle car.

Here’s a look at their responses: 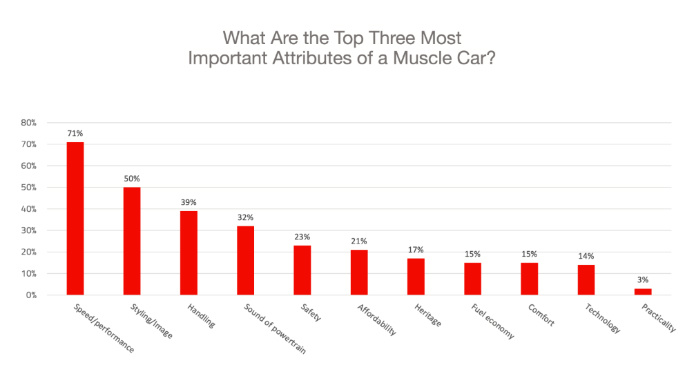 Interestingly — but perhaps not surprisingly, given muscle cars’ penchant for loud V8 engines — ‘sound of powertrain’ was the fourth most-popular choice, with 32 percent of people putting it in their top three attributes of muscle cars.

“This is likely why Dodge put on its electric Charger concept a system to mimic a real exhaust setup — and one that’s as loud as the current Hellcat’s,” Lydstone said. “Muscle cars are meant to be loud and visceral; preserving that as they shift towards electrification will be crucial to their survival.”